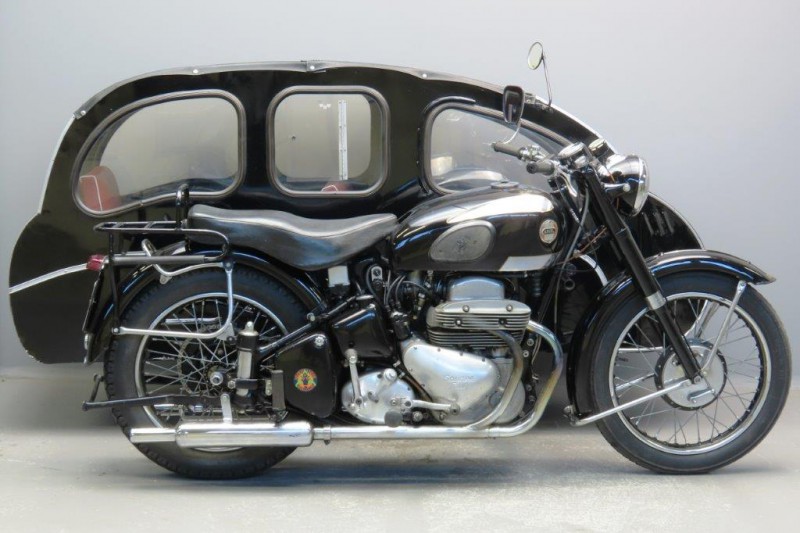 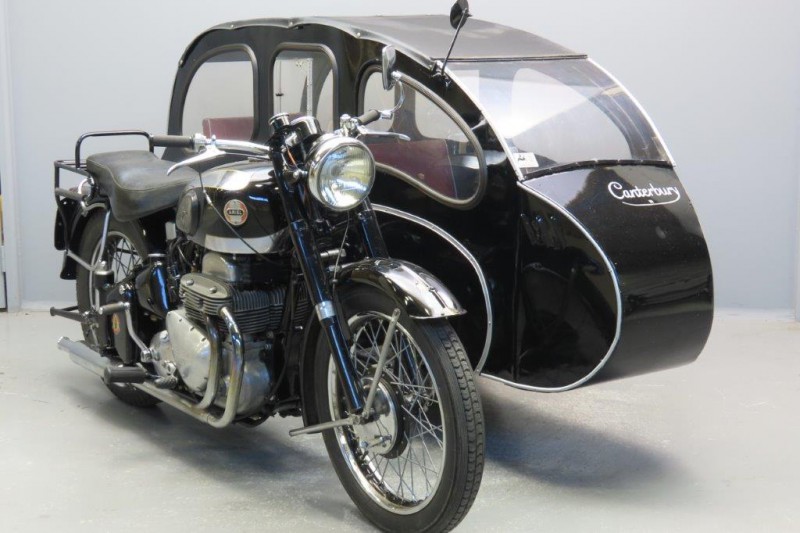 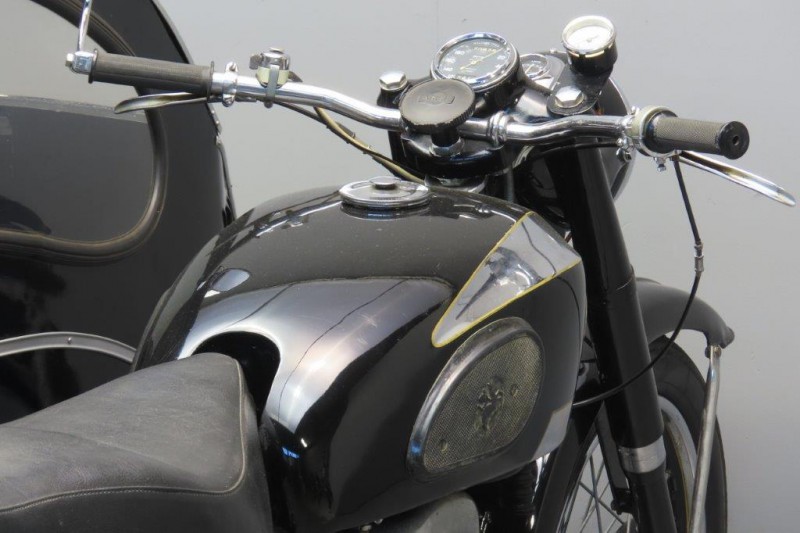 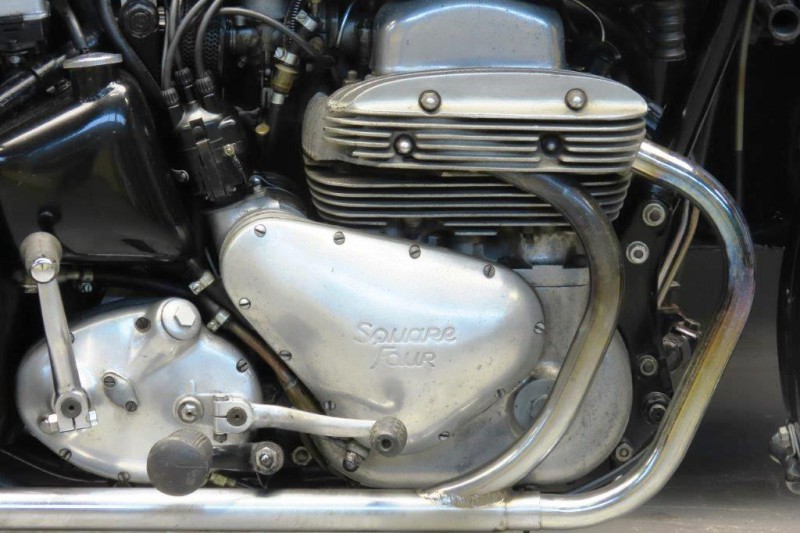 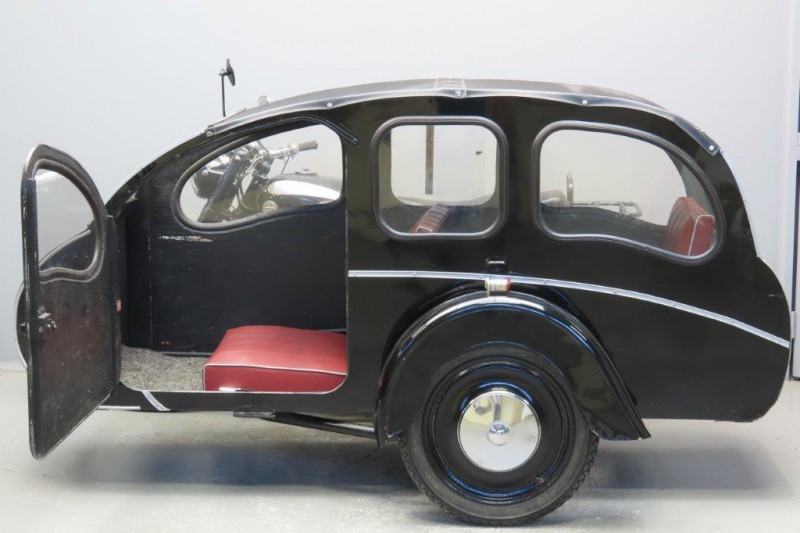 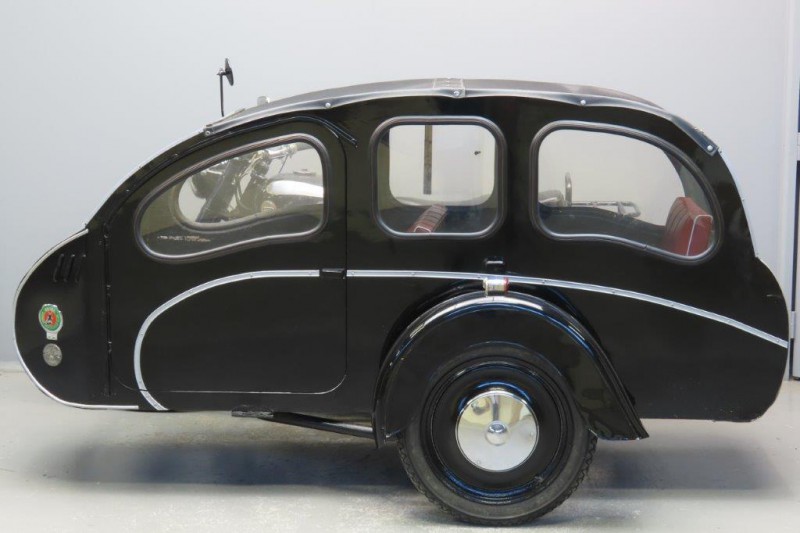 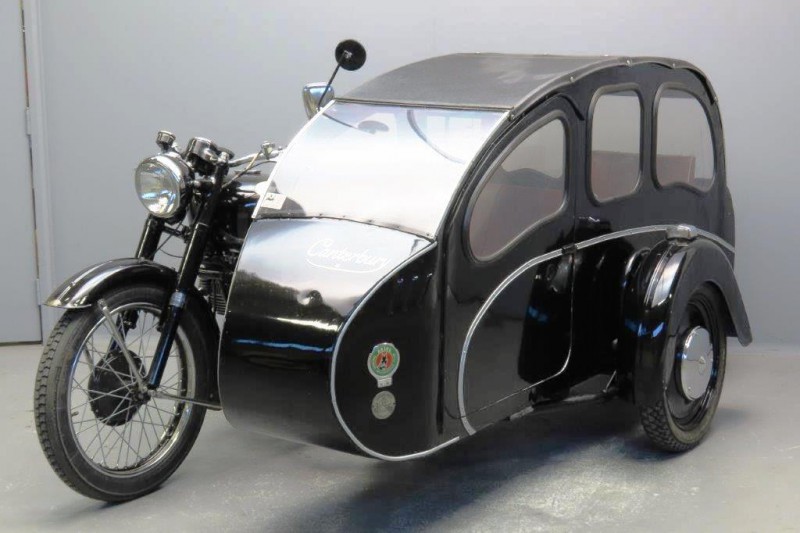 Ariel unveiled the all new SQ 4 to the motorcycle world at the Olympia show in 1930.
It was a brainchild of design genius Edward Turner and was powered by an OHC engine with 2 parallel crankshafts, mounted in a crankcase transversely across the frame.
The two cranks were geared together in the center uf the unit, so in effect there were two vertical twin engines running in opposite directions.
The result was a silky, smooth power output with instant response to the throttle.
In 1932 the capacity was increased to 600 cc and in 1937 a new 4 appeared, this time of 1000 cc and with pushrods instead of the chain-driven overhead cam.
This new model was labelled the mark I.
Roller conrod bearings were also dropped in favour of plain bearings and the coupling gears were moved from the center of the engine and placed in a case on the left side.
Power output was about 38 HP, top rpm approx. 5500.
In 1939 a new spring frame was added, and after WW2 new telescopic front forks.
The engine was also considerably lightenend by the use of a new alloy cylinder barrel and head.
Additional finning was used to improve heat dissipation.
Lucas coil ingintion was fitted in place of magneto ignition for better starting and less weight.
In 1953 the “four pipe” MK II was introduced.
The monobloc cylinder barrel was replaced by individual units, resulting in four separate exhaust pipes, A redesigned head upped the power and the 42 hp Square Four MK II had a genuine top speed of more than 160km.
A 1956 “Motor Cycling” road tester wrote enthousiastically:
“A unique sense of power is derived from piloting this one-litre “four”; few, if any, other types of machine provide the same feeling of exhilaration.
The driver of a “Squariel” has four cylinders and 1,000cc at his fingertips, waiting to respond to his every whim.
Therefore, it is not surprising that, while this model can outstrip most other vehicles in terms of performance and treats severe gradients as though they were not there, it is also docility itself when chocked city byways demand such behaviour.
On the model tested recently, top gear performance spanned no less than 92 m.p.h. – from a mere 10 m.p.h. snatch-free dawdle to its on-the-level maximum of 2 m.p.h. over the “ton”. “

This fine and very reliable combination has provided loyal service to its last (and second) owner for almost 50 years.
It is fitted with a practical oil cooler and comes in good condition throughout.