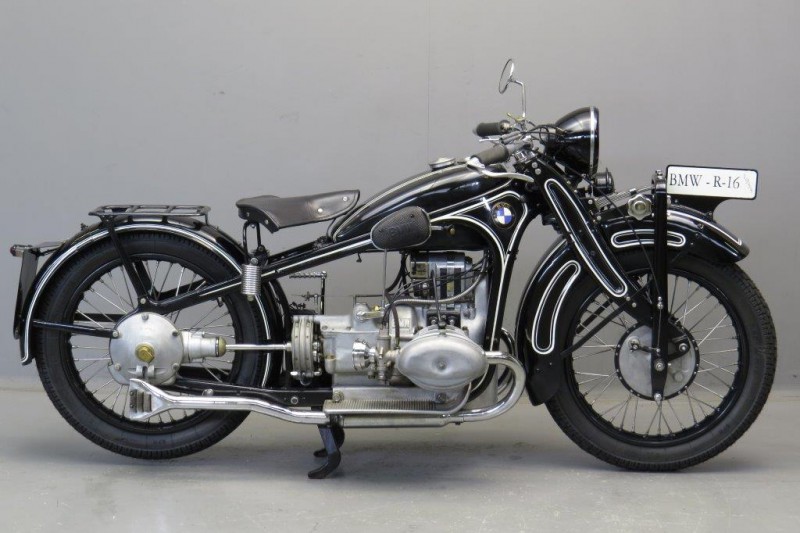 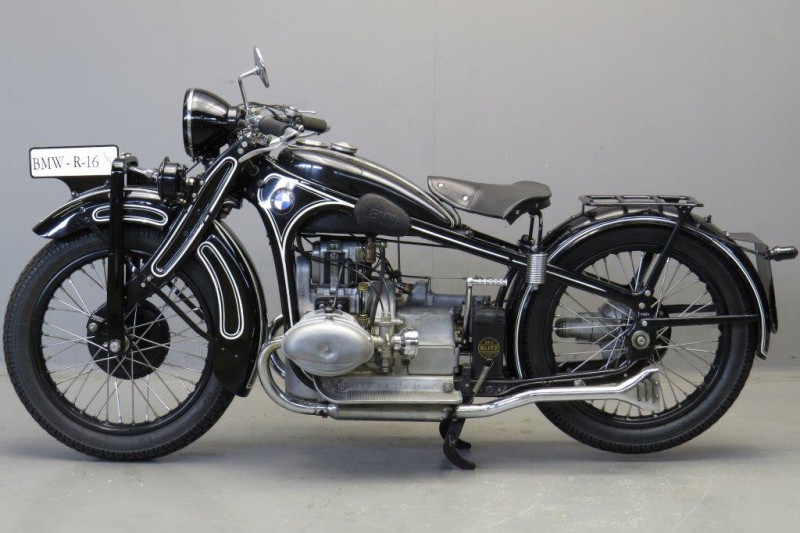 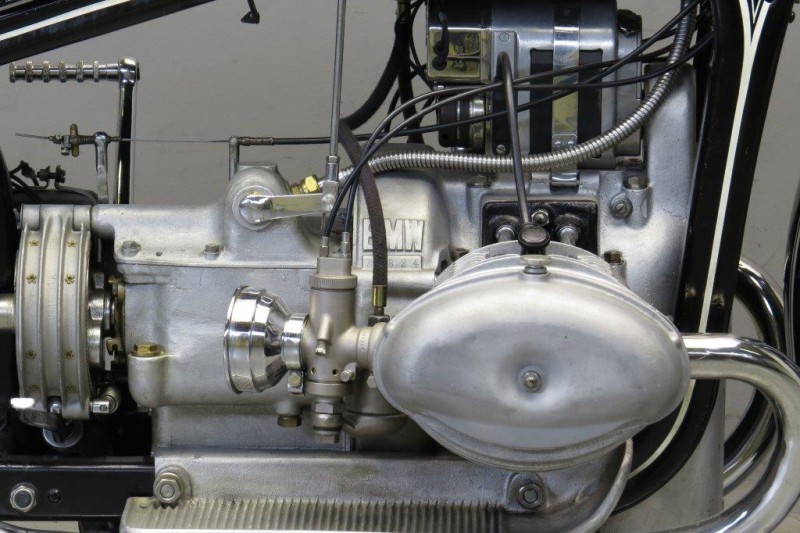 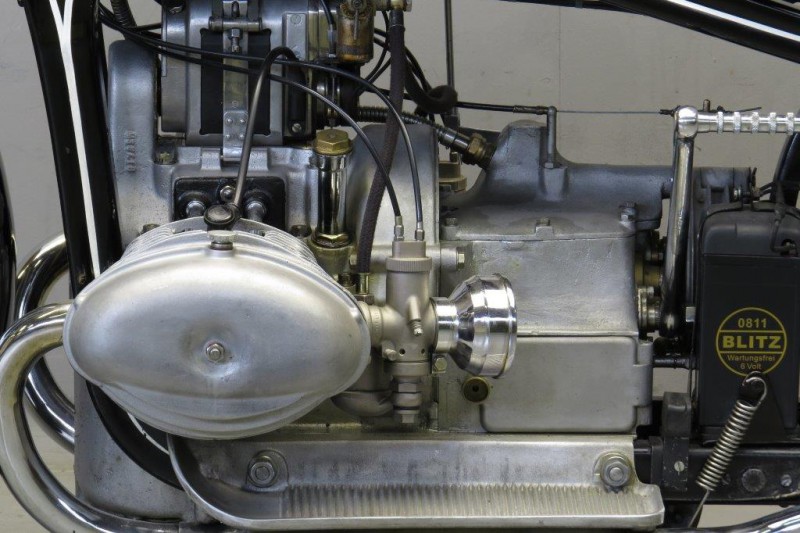 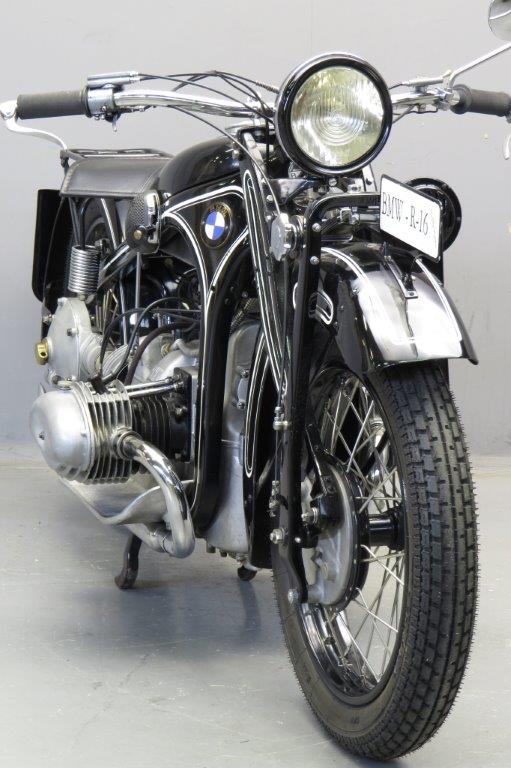 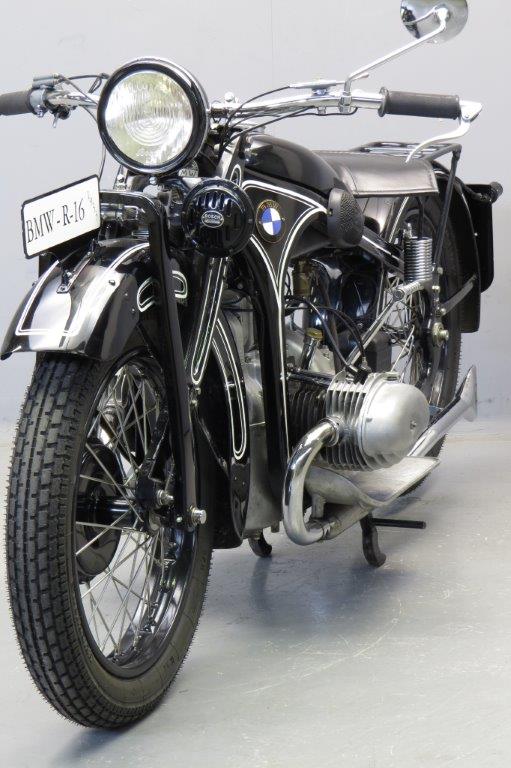 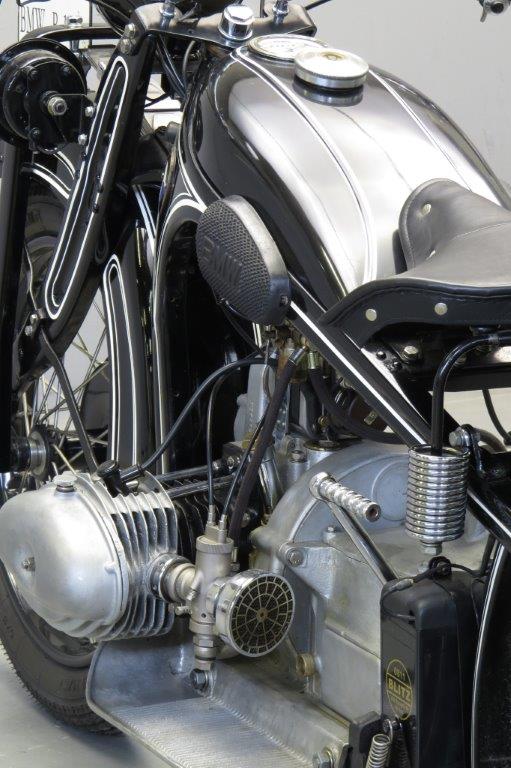 The first BMW, the 500 cc side valve tourer  R 32,  was marketed in 1923. 3100 machines were built.
Two years later an OHV  sports version was brought out, the R 37.
This machine had the smallest production run of all commercially produced models in the company’s motorcycling history: only 175 were produced.
It was replaced in 1927  by the improved R 47 that was introduced alongside the side valve-engined R42 tourer, both models benefiting from a redesigned and more powerful engine.
It was set further back in the duplex loop frame, which improved weight distribution and enabled straight front down-tubes to be used.
The braking  got its share of attention too: the old block-and-pulley type rear brake  was replaced by a drum on the driveshaft gripped by external contracting bands.
The step to a 750 cc class   OHV machine was made  in 1928  when the   R 63 was brought out.
Its 734 cc engine was the most powerful  BMW  at the time with 24HP @4,000 rpm.
At the end of the nineteen twenties motorcycle engineers  got more and more interested in the    use of pressed steel for motorcycle frames  and BMW decided  on this type of frame for the  new  R 11 and R 16 750 cc class models that were introduced at the end of 1929.
The R16 was the sportsman’s machine, its   engine delivered 25 HP @ 4,000 rpm, which grew to 33 HP @ 4,500 rpm for the 1933 models.
BMW were very keen on world speeds records in this period: Ernst  Henne was almost unbeatable on his supercharged  750 cc record machine and had set a world  record speed of 244.4  kilometer per hour in 1932.
Interesting new features in the R 16 were its floating wheel spindles  and the fact that lighting, horn and speedometer were included in the standard specifications.
1932 and 1933 models had twin carburetors and a later addition was the  practical position of the gear change lever behind the right knee pad. The R 16 was a well-engineered and high quality motorcycle, but its introduction in the Depression years and its high price made that only 1900 were built.
This rare survivor  has been restored a number of years ago.