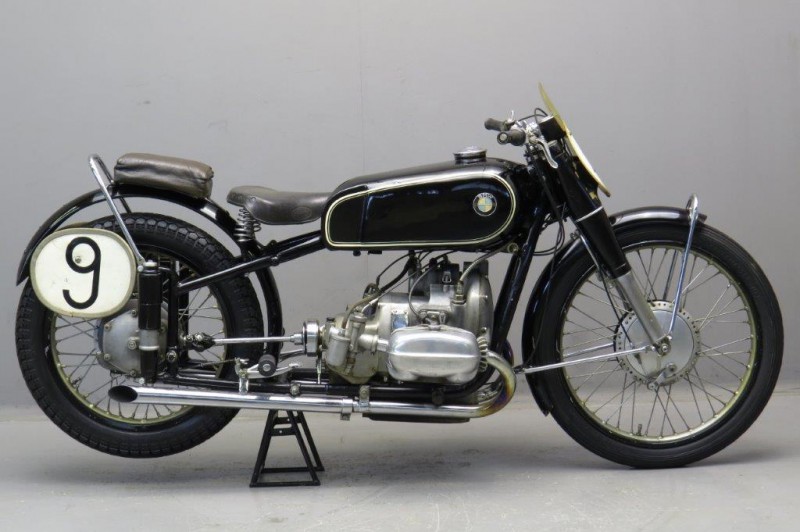 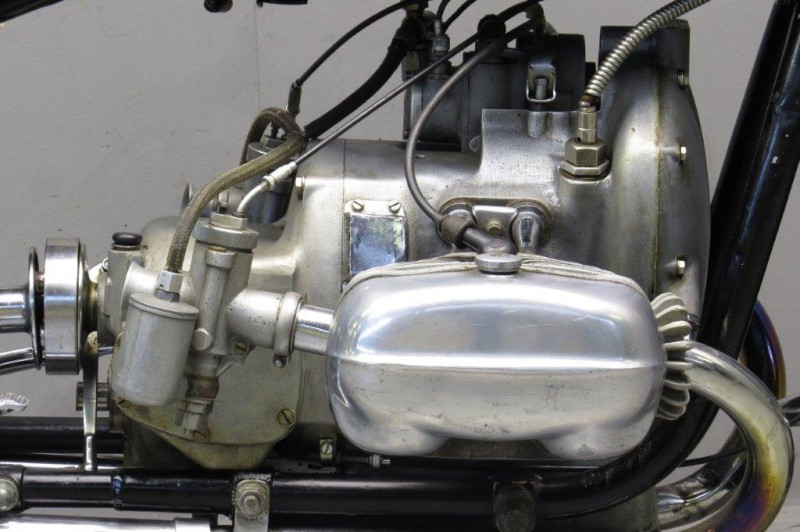 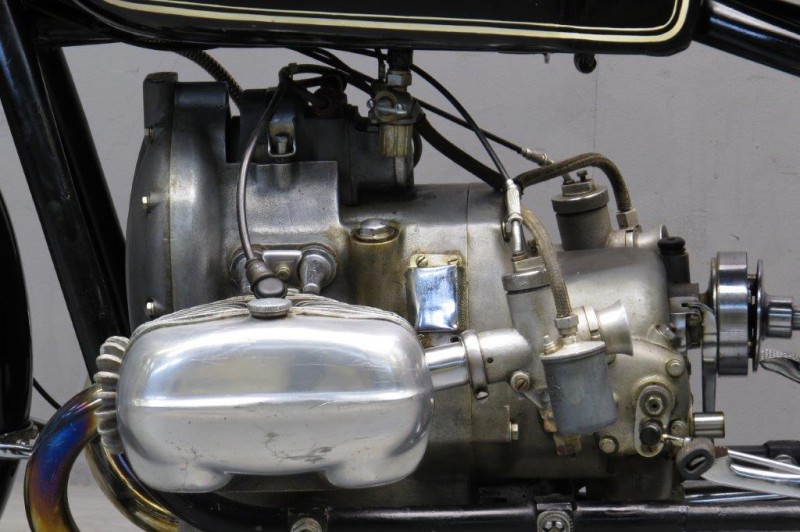 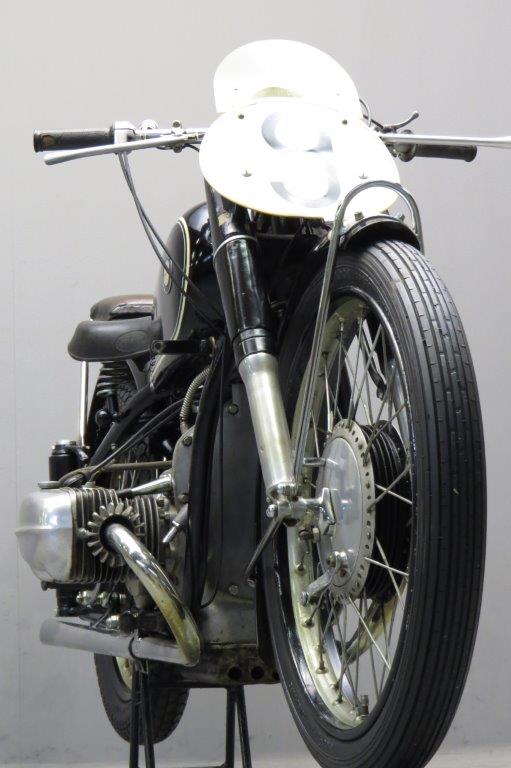 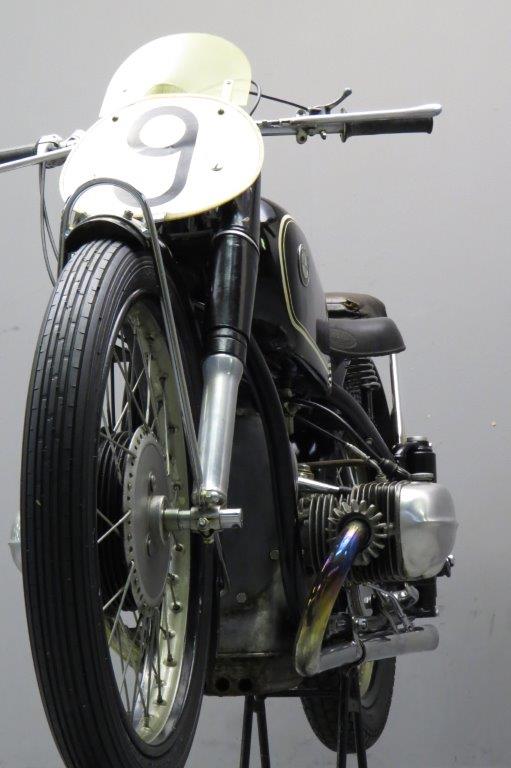 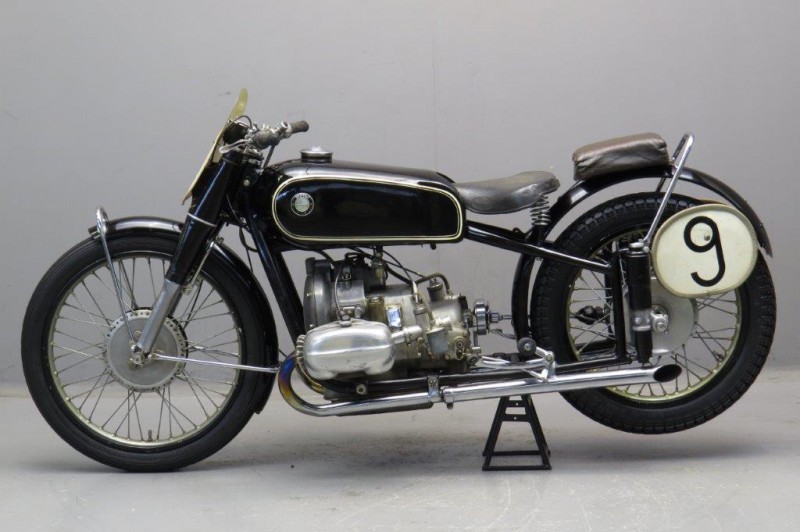 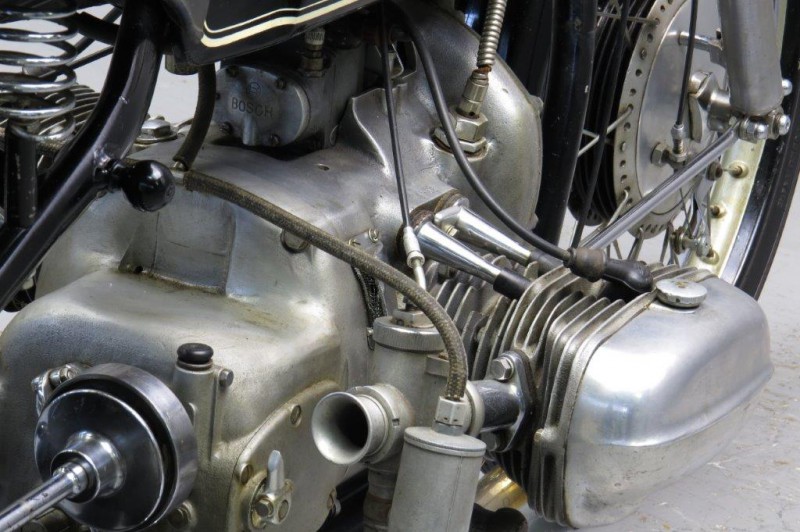 This machine  is one of the 20 genuine production racers which  BMW completed and sold in 1939. In order to cash in on the successes  of the Kompressor-BMWs (superchargers)  of  mainly Ernst Henne and  Georg  “Schorsch”  Meier from 1936 till 1939, BMW also strived to offer a production racer which could match the English single cylinders on the circuits of Europe.

In 1937 an experimental model  was built   with which  Schorsch Meier competed in the very tough ISDT of 1937.
However,  it took till  the winter of 1938/1939 for  BMWs race department  to start the production of a batch of 20 engines.
Due to the beginning of  WWII only  17  machines were completed and sold; surprisingly some 4 years ago number 18 emerged in the USA in a very original state.
The R51RS was based on the standard R51 (1938-1940).
The racing  department  had  produced   a lot of special parts:  the R51’s chain for driving the camshaft was replaced by a train of skew gears, the dynamo and the battery-ignition was replaced by a Bosch racing magneto as used on the Kompressor-BMW and almost all  engine covers were replaced by identical parts cast in magnesium.
The RS was fitted with 21 “ front wheel and 20”rear wheel just as the K-models had been.

The heart  of  this  particular RS  is   the second engine  that has been manufactured/ delivered . The complete engine housing, the magneto and the  camshaft drive  are original;  over the years  all of the rest  has been improved/replaced by newer parts in order to make the engine  perform better as a sidecar-outfit on the post-war circuits in Germany.
At present there are a lot of replicas around, which mainly are based on Ernst Hoske’s  replica of the R51RS.
This however  is quite  distinguishable  from the original BMW-design.
All in all this  exciting racing machine  can be brought back to its original  condition  without encountering big problems.