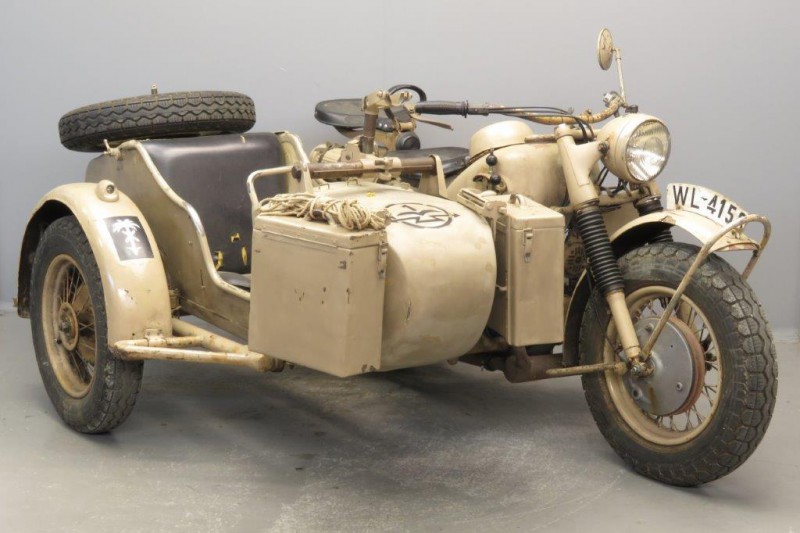 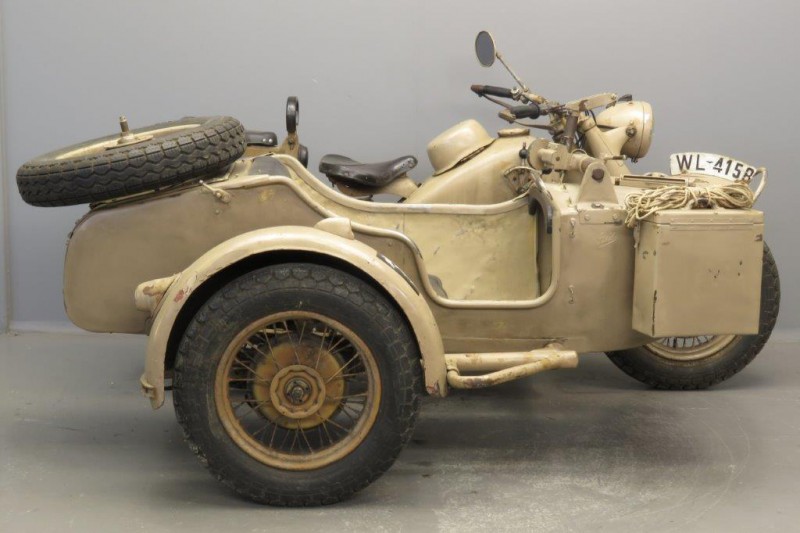 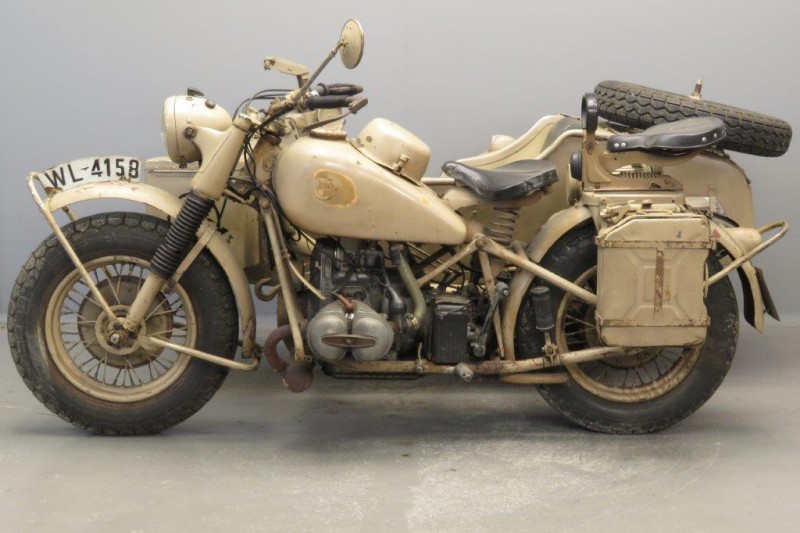 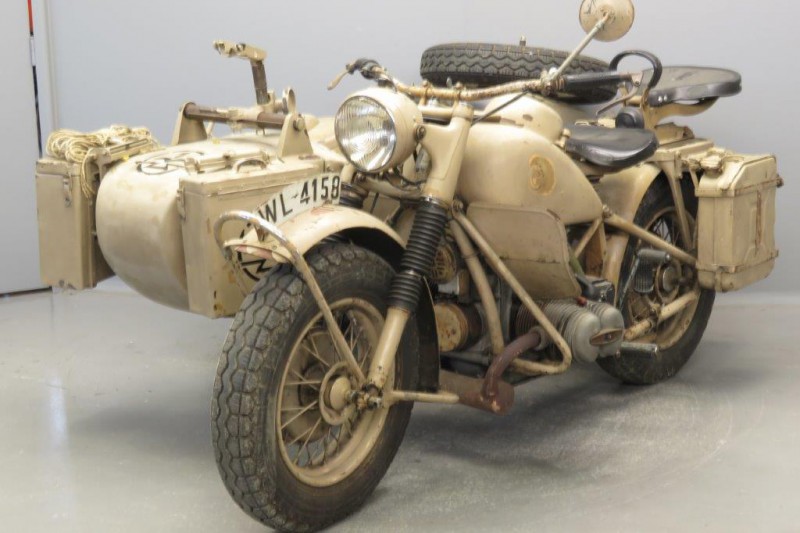 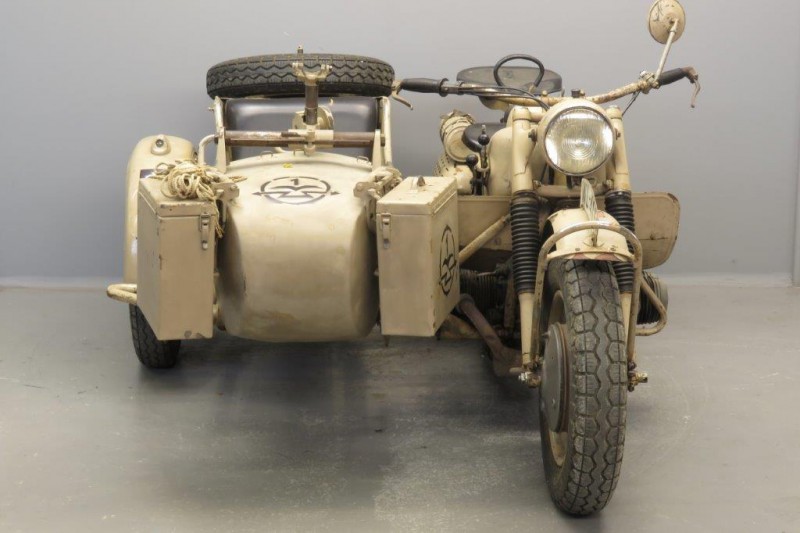 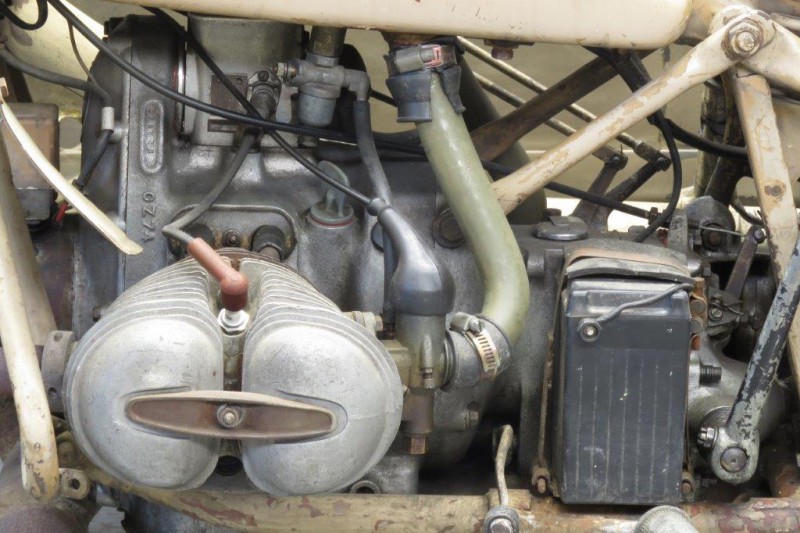 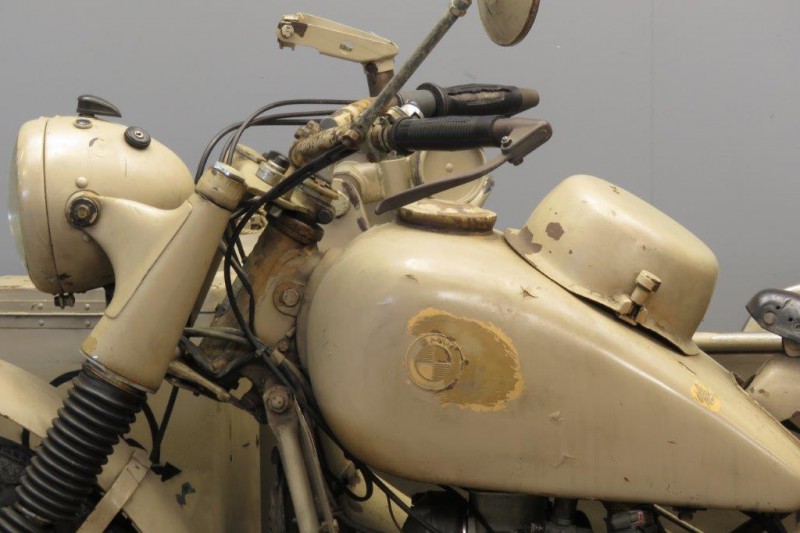 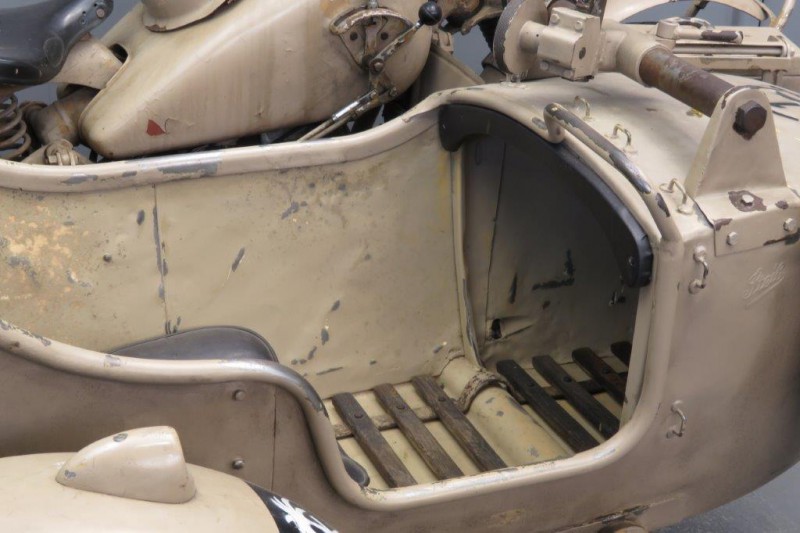 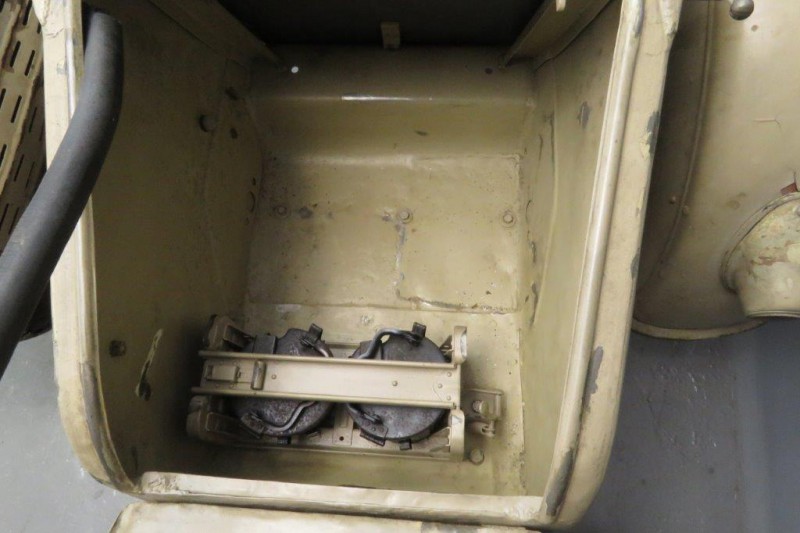 In the 1930s BMW were producing a number of popular and highly effective motorcycles.
In 1938 development of the R75 started in response to a request from the German Army.
Preproduction models of the R75 were powered by a 750 cc side valve engine, which was based on the R71 engine.
However it was quickly found necessary to design an all-new OHV 750 cc engine for the R75 unit.
This OHV engine later proved to be the basis for subsequent post-war twin BMW engines like the R51/3, R67 and R68.
The third side-car wheel was driven by an axle connected to the rear wheel of the motorcycle.
This was fitted with a locking differential and selectable road and off-road gear ratios through which all four forward and the reverse gear worked.
This gave a choice of eight forward and two reverse speeds and made the R75 highly manoeuvrable and capable of negotiating most surfaces.
Useful features were the wide, interchangeable, 16″-diameter wheels shod with knobbly tyres and the hydraulically operated 250 mm internal expanding brakes.
Since the R75 weighed more than 900lbs unladen and could top 60mph it needed all the stopping power it could get.
The high-level exhaust and air intake enabled the machine to perform in wet conditions.
The BMW R75 and its rival the Zündapp KS 750 were both widely used by the Wehrmacht in Russia and North Africa, though after a period of evaluation it became clear that the Zündapp was the superior machine.
In August 1942 Zündapp and BMW, on the urging of the Army, agreed upon standardization of parts for both machines, with a view of eventually creating a Zündapp-BMW hybrid (designated the BW 43), in which a BMW 286/1 side-car would be grafted onto a Zündapp KS 750 motorcycle.
They also agreed that the manufacture of the R75 would cease once production reached 20,200 units.
After that point BMW and Zündapp would only produce the Zündapp-BMW machine, manufacturing 20,000 each year.
Since the target of 20,200 BMW R75s was not reached, it remained in production until the Eisenach factory was so badly damaged by Allied bombing that production ceased in 1944.
However the standardisation programme meant that machines that were produced by BMW and Zündapp used 70% of the same components.
This simplifies the supply of spare parts for these vehicles, many of which are still in the hands of historic motorcycle enthusiasts.
These vehicles are still highly desirable as collector’s items because of their complex and durable technology, and are correspondingly expensive.
A well-restored R75 can be still used for everyday purposes, on or off-road without problems.
This iconic combination is in good shape.