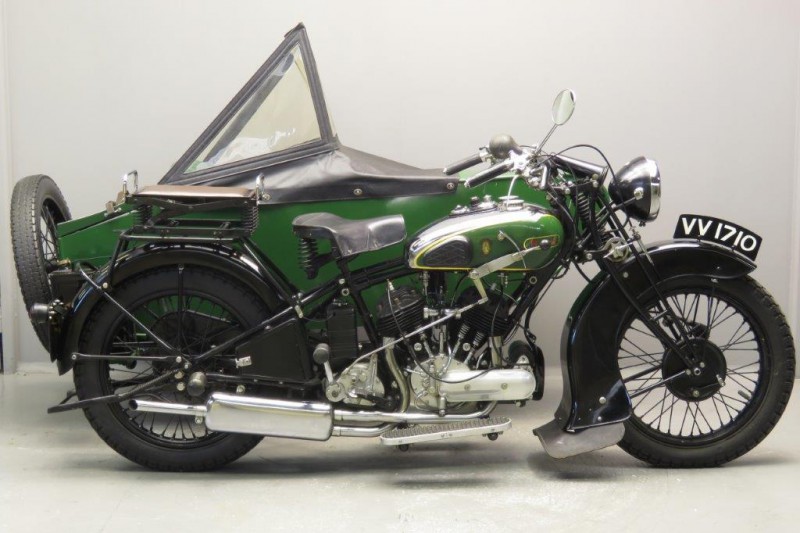 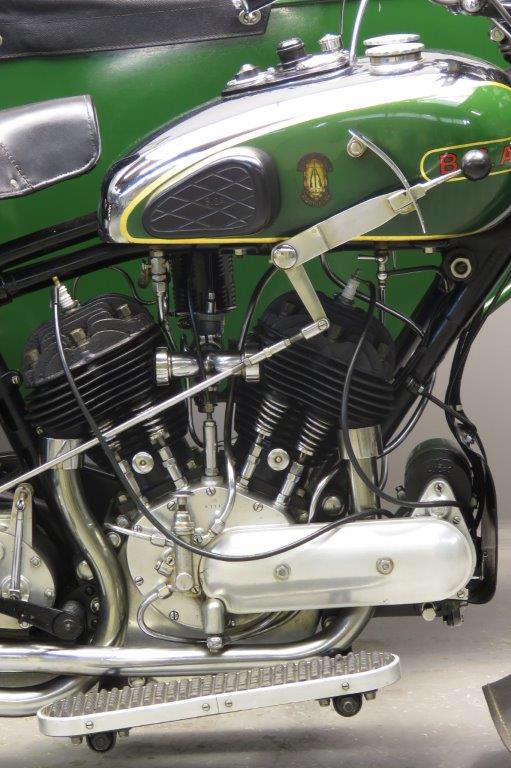 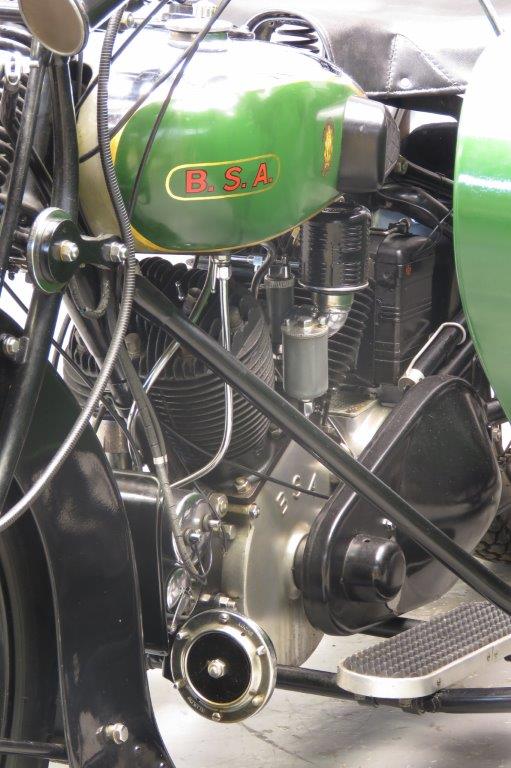 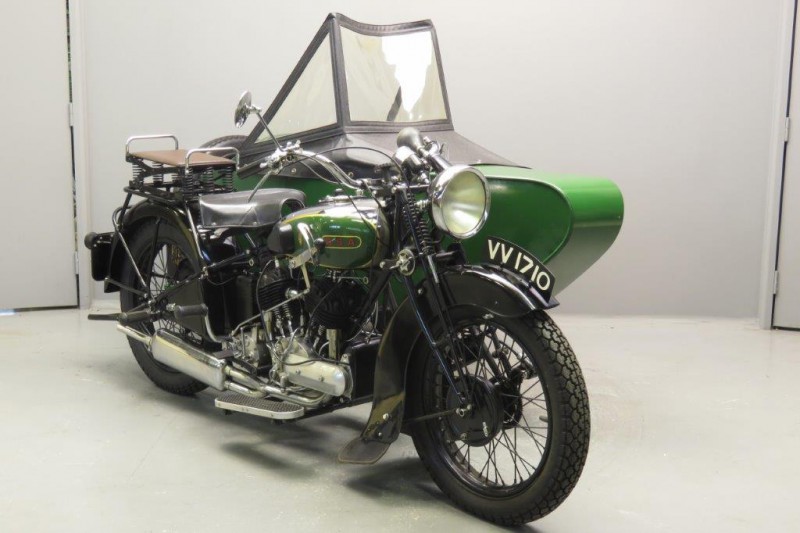 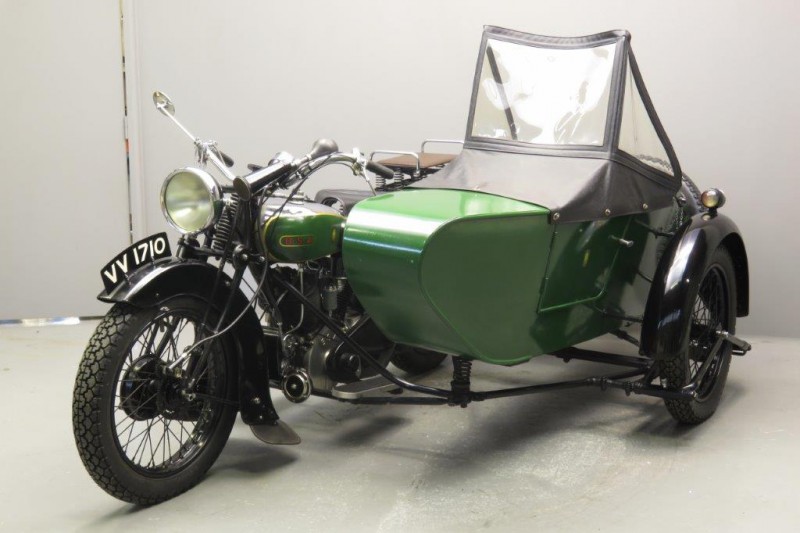 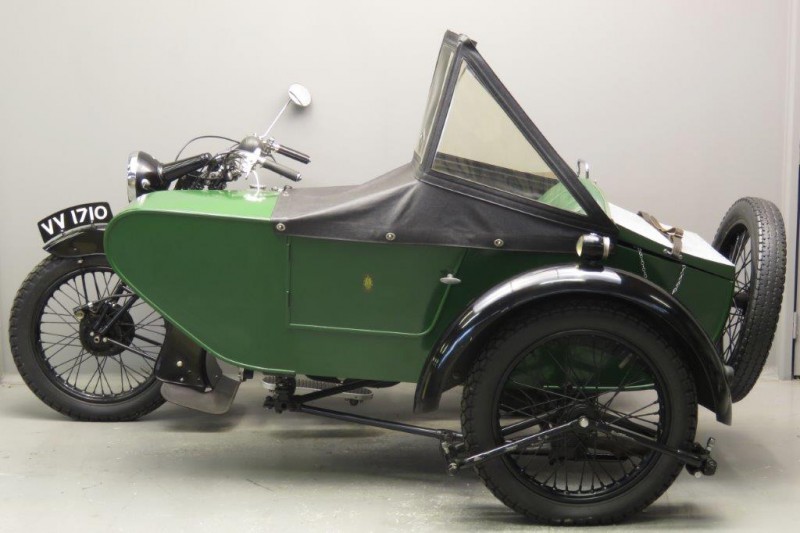 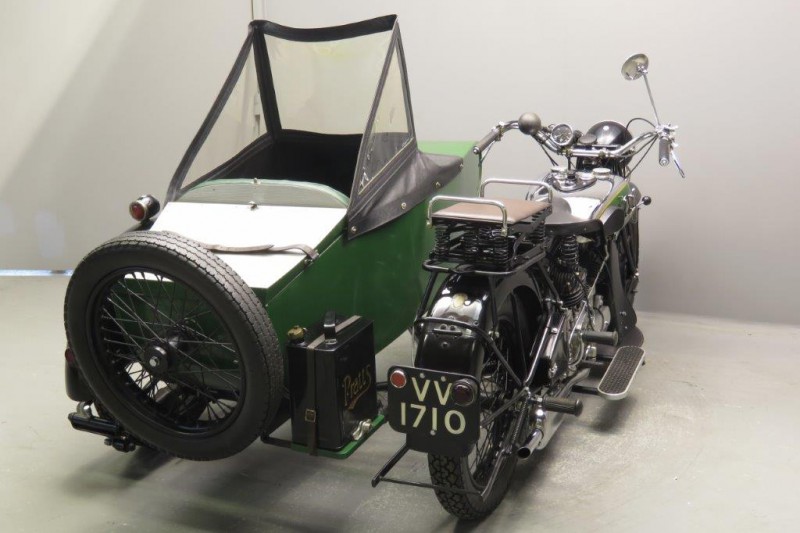 BSA’s first V-twin was the Model A and it was primarily intended as a sidecar machine.
It was introduced for the 1920 season and remained in production for about 3 years.
A larger 986cc version debuted as the Model F in 1922 and would continue in production as the Model G, regularly revised and updated, until 1940.
The 80×98 bore x stroke engine has the cylinders set at a 50 degree angle.
The constant loss lubrication system employs a mechanical pump with oil control in the tank top panel.
The wheels are quickly detachable and interchangeable and the gearbox is BSA’s own three speed design.
The WT designation refers to a World Tour that was held  from August 1926 till March 1928  to test the reliability of the luxurious 986 cc touring machine, that was popular both for touring and police duties.
Two 986 cc Colonial Models equipped with box carrier sidecars set out in August 1926 on a tour through 23 countries.
They completed the tour successfully in March 1928 after having covered 25,000 miles.
The tour generated muchpositive publicity for BSA and from 1929  up to including 1934  the model G was also referred to in the catalogues as the “WT”.
The previous owner purchased this Model G33-13 in the 1950s and saved it from being scrapped, a fate that befell many similar machines in the post-war period.
It had been dry-stored since 1939 and subsequently was taxed only once, in 1969, prior to being rebuilt.
A dedicated perfectionist, the former owner carefully restored the machine over many years, using new-old-stock parts where components were deemed too poor to restore, or having replacements manufactured using originals as patterns.
The latter include a hand-beaten copper exhaust and silencer, now re-chromed.
New-old-stock parts include the engine, gearbox, clutch, cylinders, cylinder heads, front forks, yokes, flywheel, crankshaft assembly, and magdyno.
The fuel tank was re-plated, and the saddle frame re-enamelled in heavy period finish by the local gas board (responsible for re-enamelling gas cookers).
Foot-boards were manufactured out of heavy-duty rubber by the owner from original patterns.
The motorcycle is attached to a BSA No. 6 Heavy Touring sidecar chassis which carries a BSA Medium Touring sidecar, the latter panelled with 24-gauge galvanised iron rather than Zintec mild steel.
The BSA has been in storage for the last 30 years, and only some 800miles have been covered in the past 10 years or so.
This fine combination runs smoothly and comes complete with pillion seat, Lucas Lighting system, bulb horn & Altette electric horn.
The rider can keep track of his speed with the help of the Smiths speedometer.