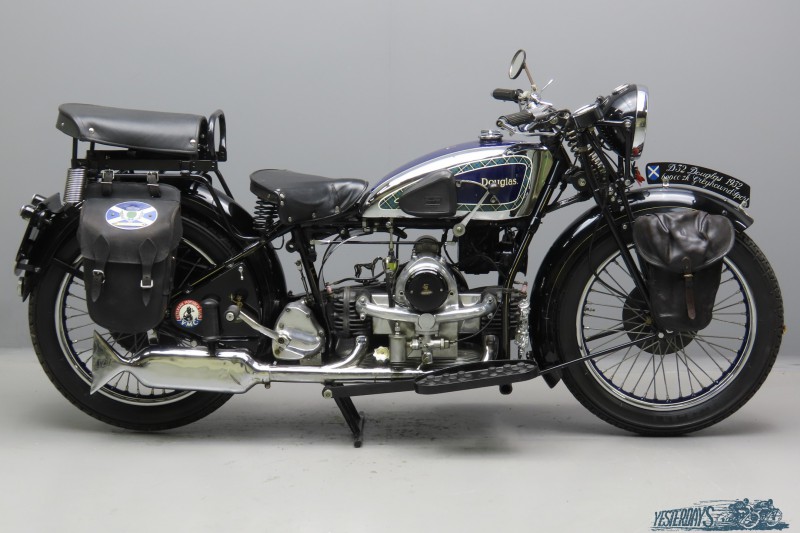 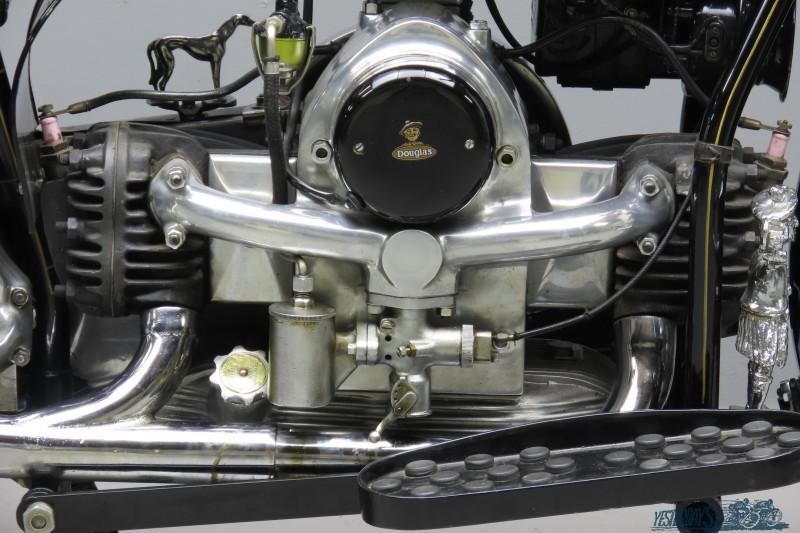 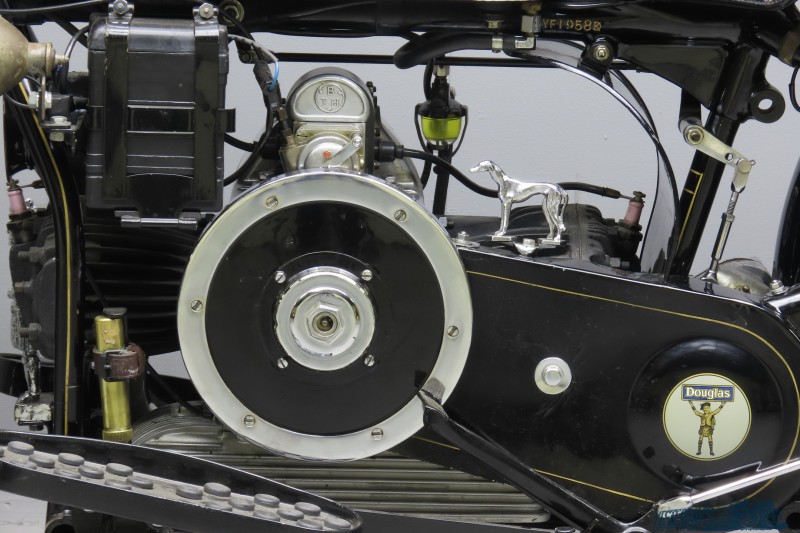 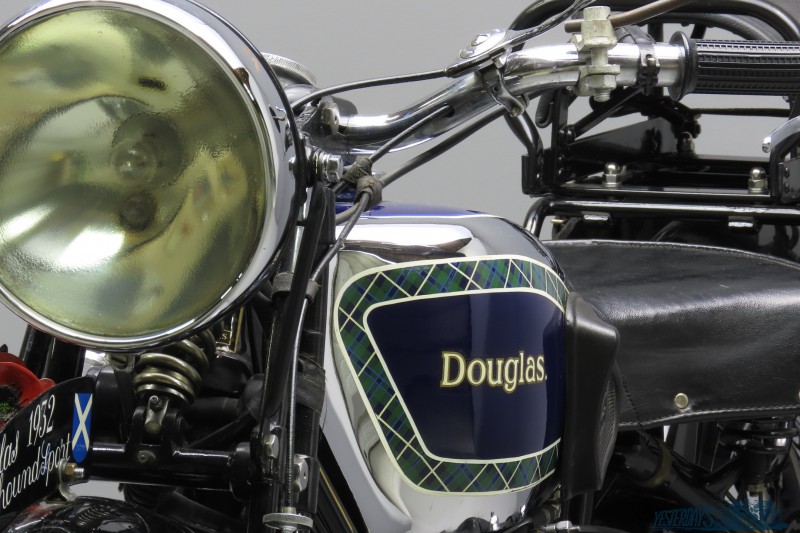 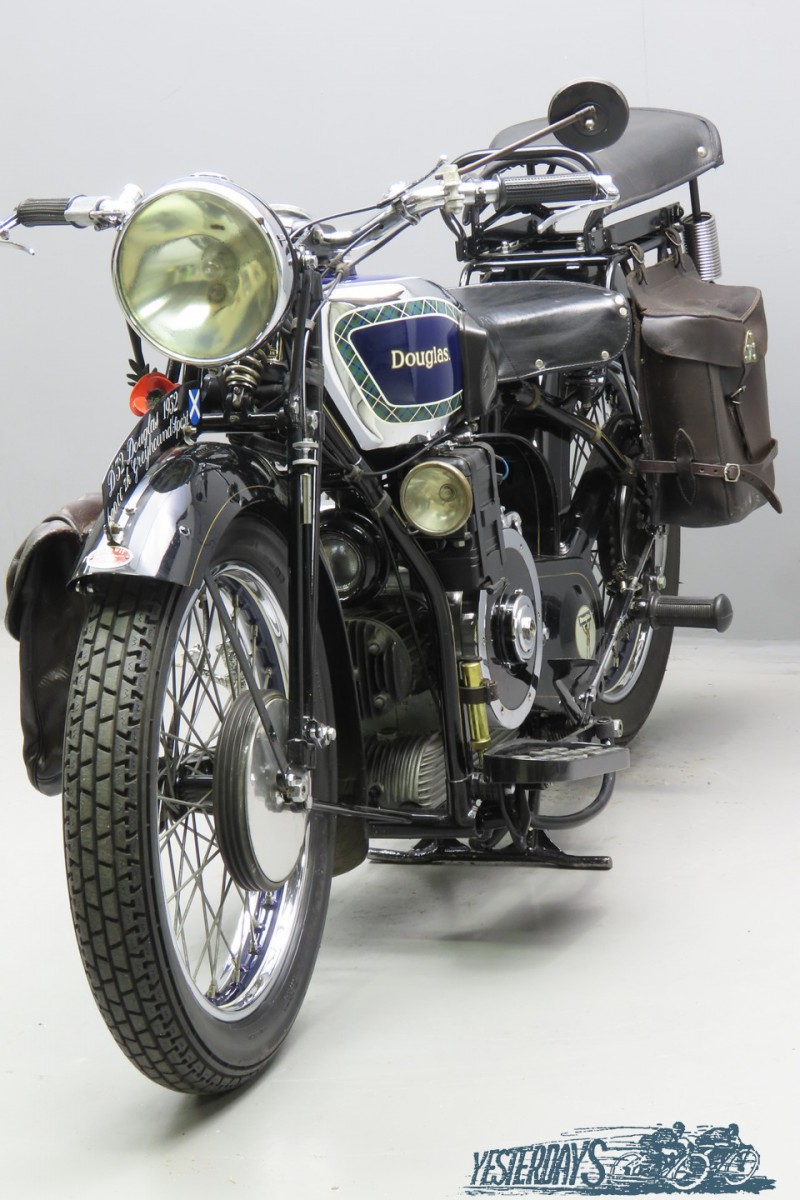 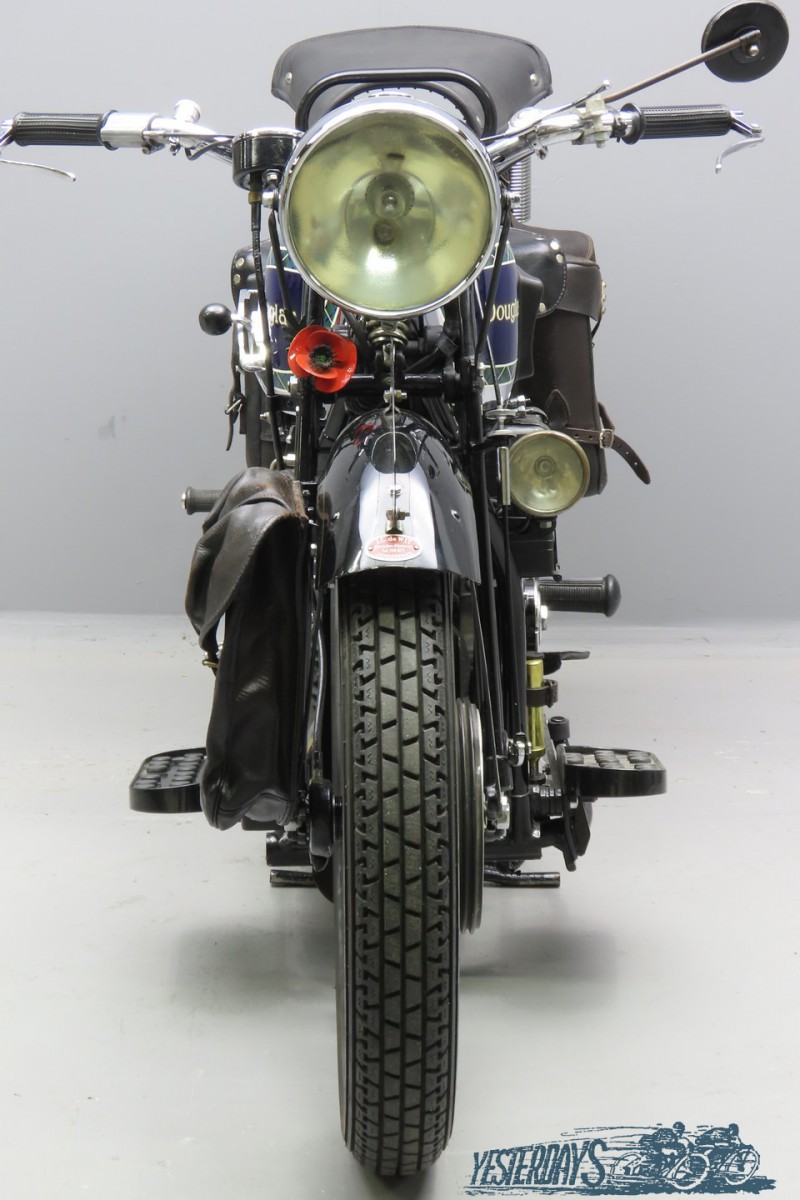 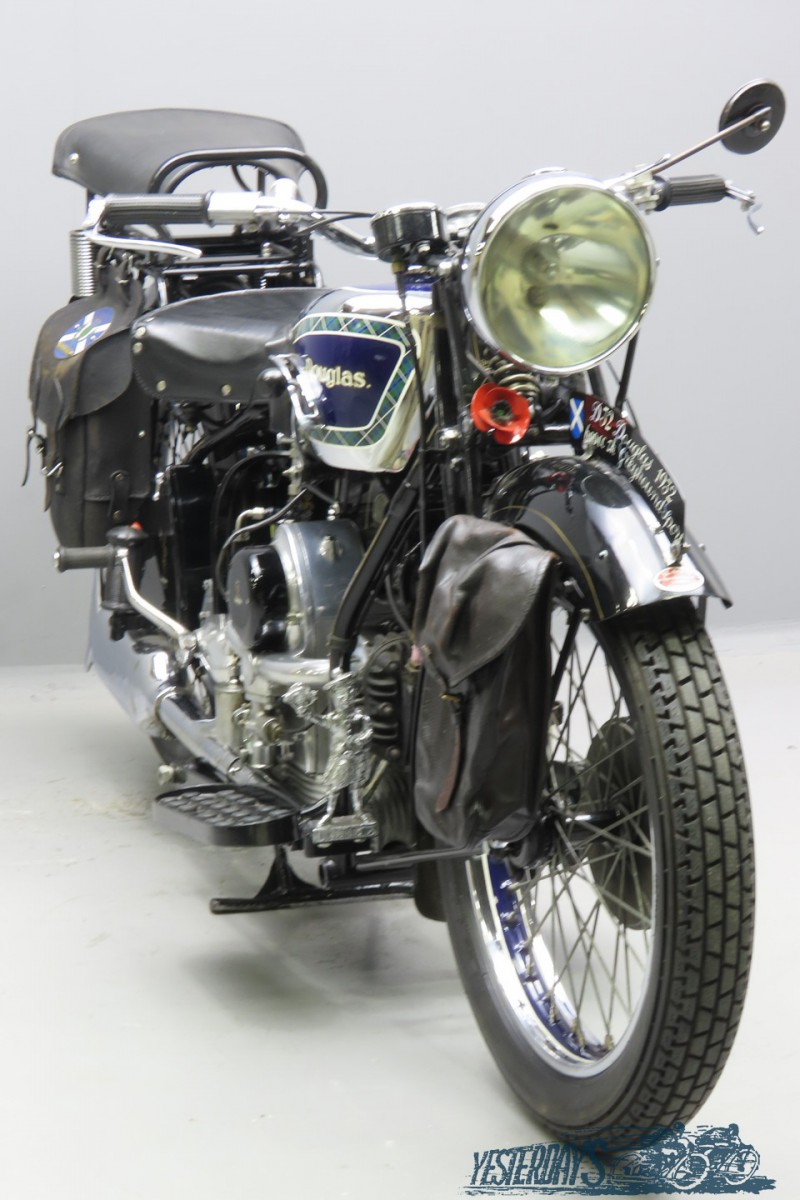 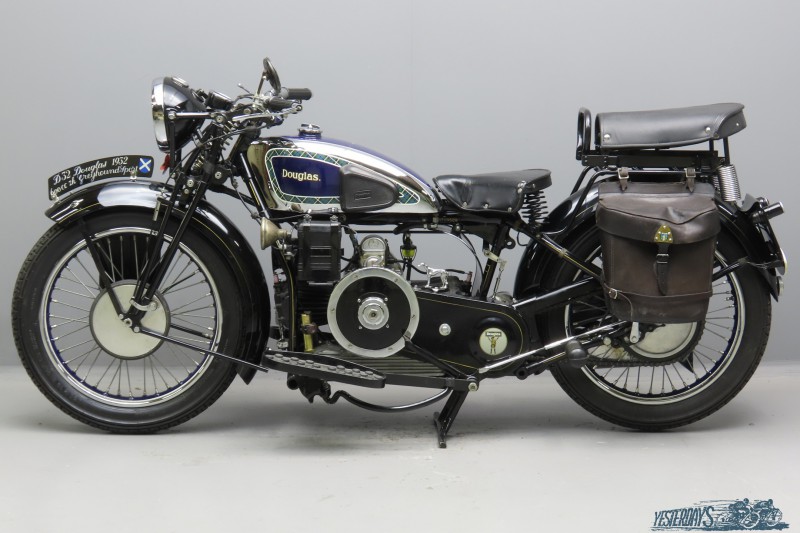 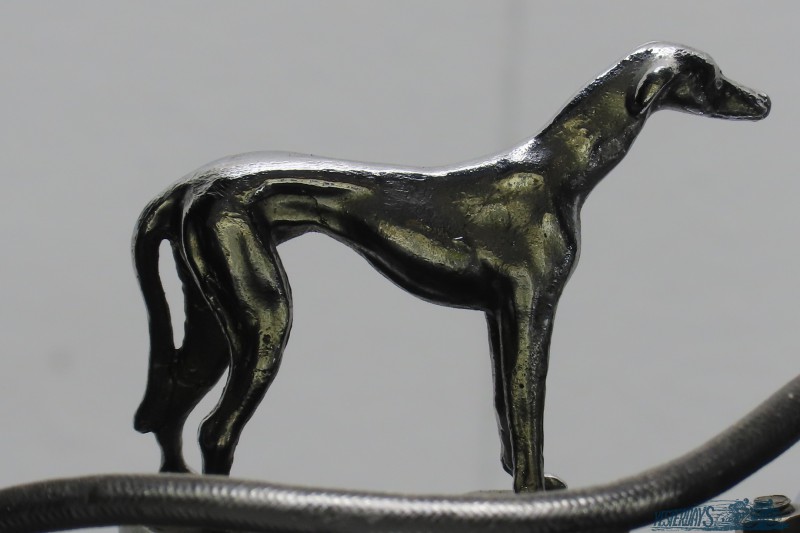 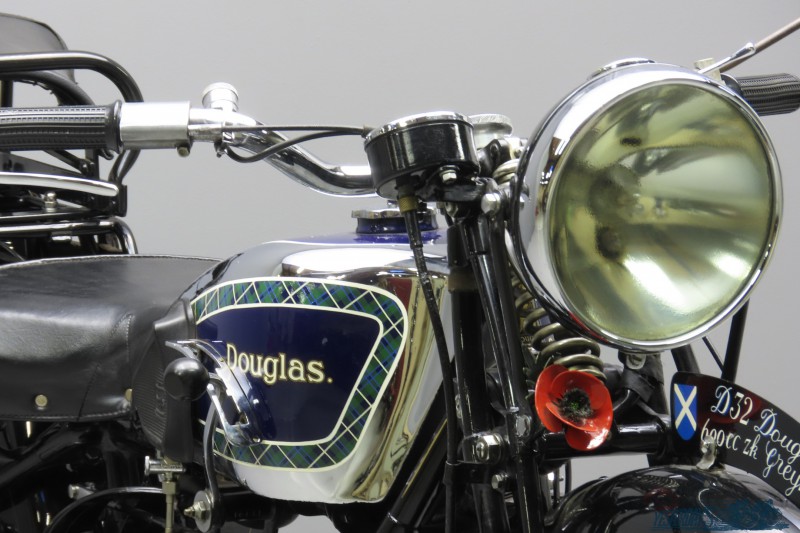 It is at the 1929 Olympia Show that the new S5 (500 cc ) and S6 ( 600 cc)models make their appearance.
Designed by Freddy Dixon, these are undoubtedly the most silent and flexible motorcycles available at this time.
The whole design concept is bristling with new ideas, even to the extent of following car design in certain aspects.
Who else can virtually guarantee a minimum of two years’ service without need for replacements? These are the “Dixon Douglas” models, with which his name will forever be linked.
For the first time a dry sump lubrication system is employed, without recourse to any external pipes.
Very long valve guides are fitted to the cylinder barrels and the cylinder heads are detachable, above the valve seatings.
Very long tappet guides are also used and all the valve gear is completely enclosed behind finned tappet covers.
The induction system is cast-in with the timing cover to ensure the necessary warmth after a cold start. A B.T.H “pancake” dynamo, mounted immediately above the induction system, operates the lighting circuit.
The dynamo is driven by gearing from the crankshaft and is specially made for the Douglas range.
The 600 cc model has bore and stroke dimensions of 68×82 mm. (source: Jeff Clew, “The best Twin”)
For the 1931 and 1932 model years the S 5 and S 6 are improved in a number of details and get other model codes and for the 1933 model year the company decides to use dogs’ names for some of the models: the 500 cc sv becomes the “Bulldog” and the 600 cc sv the “Greyhound” .
These 1933 models were already announced in the summer of 1932; Mick Walker remarks in his book “Douglas, the complete story” that because of the financial problems in the company “from the end of 1932 until well into 1933 production was virtually at a standstill, with very few of the 1933 models actually manufactured. In fact, during the same period certain London dealers had been advertising several brand new 1932 models with significant discounts.”
As 1933 was a distressful year for the company and production of Douglas machines was very limited.
Only a few machines of this type are known to exist.
This well-restored Greyhound comes in the attractive purple-and-tartan tank livery and is fitted with Smiths speedometer, 3 authentic leather bags and substantial passenger’s seat.
Other goodies include various mascots and a grease gun fitted next to the left side footboard.