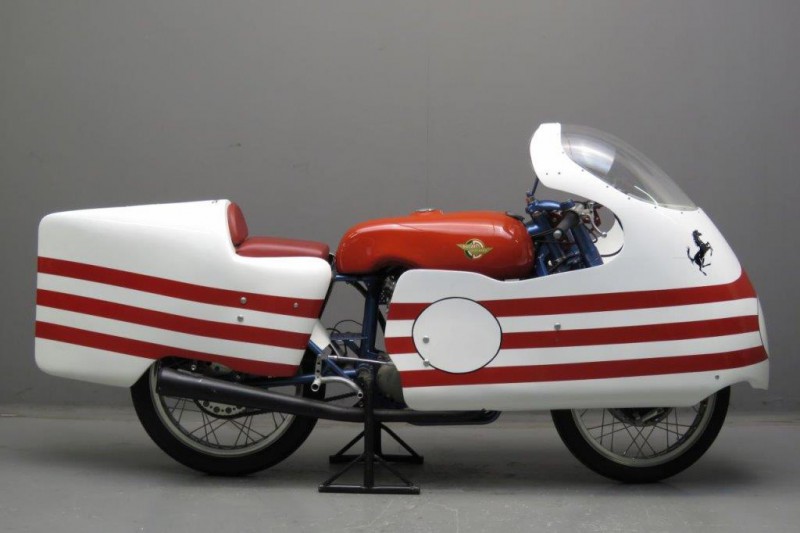 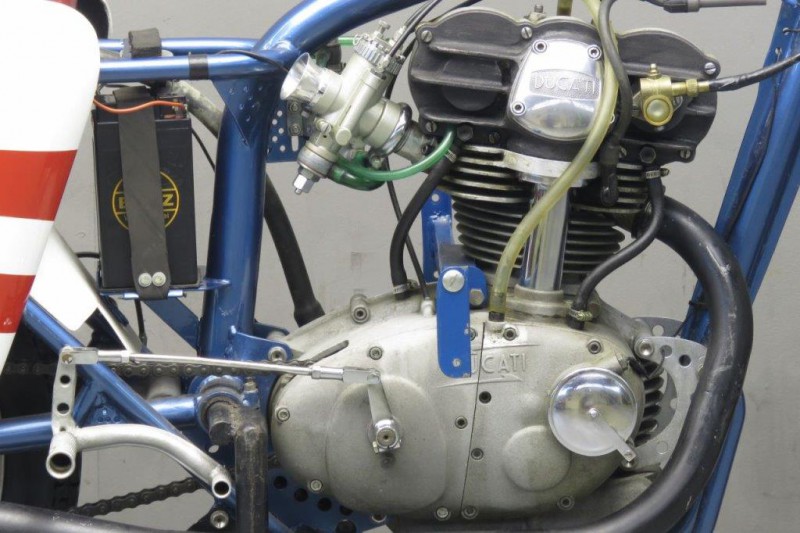 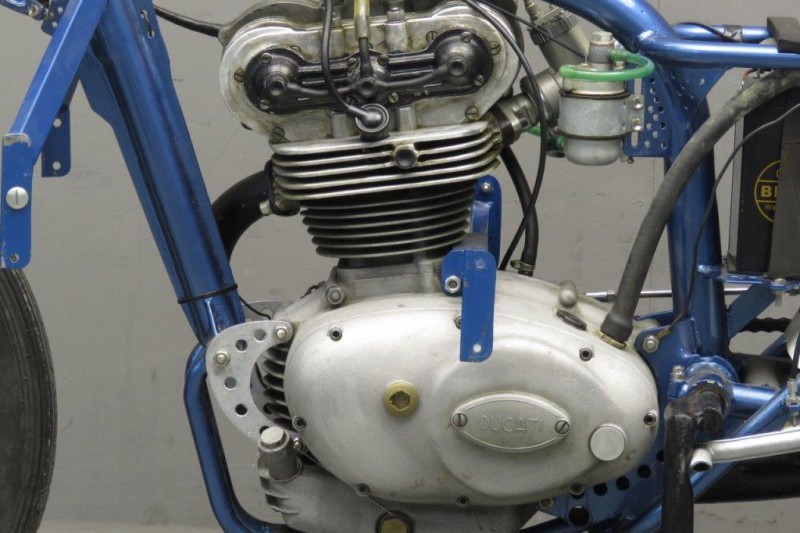 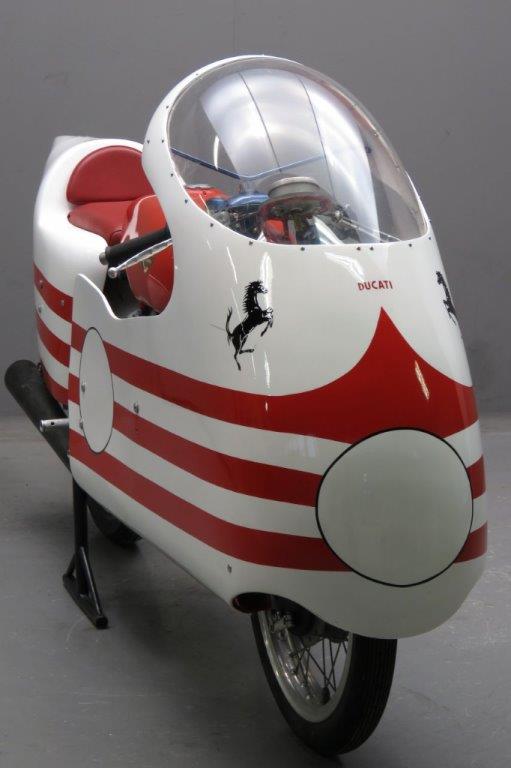 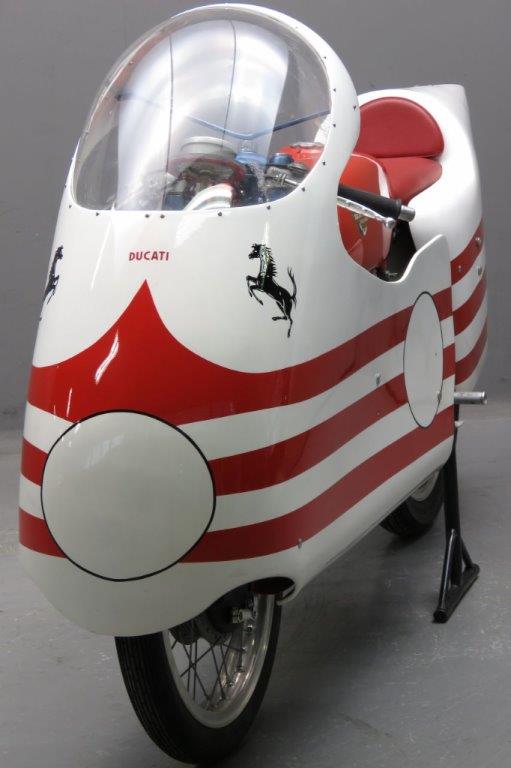 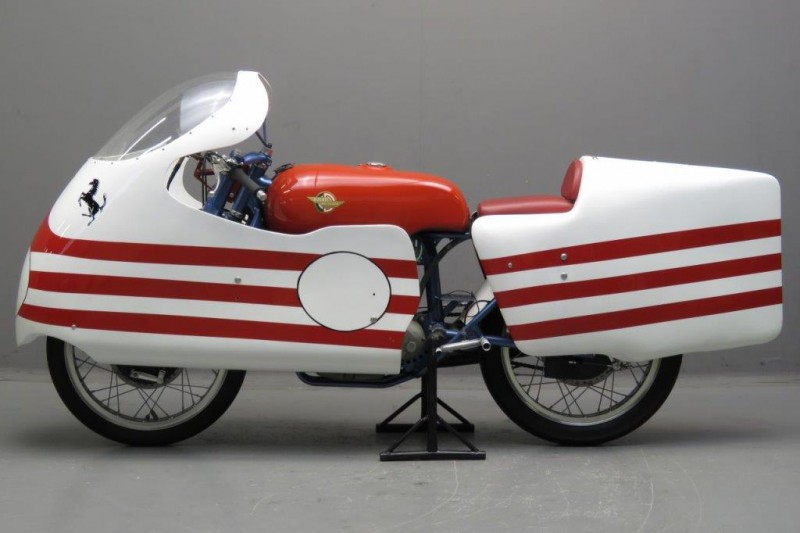 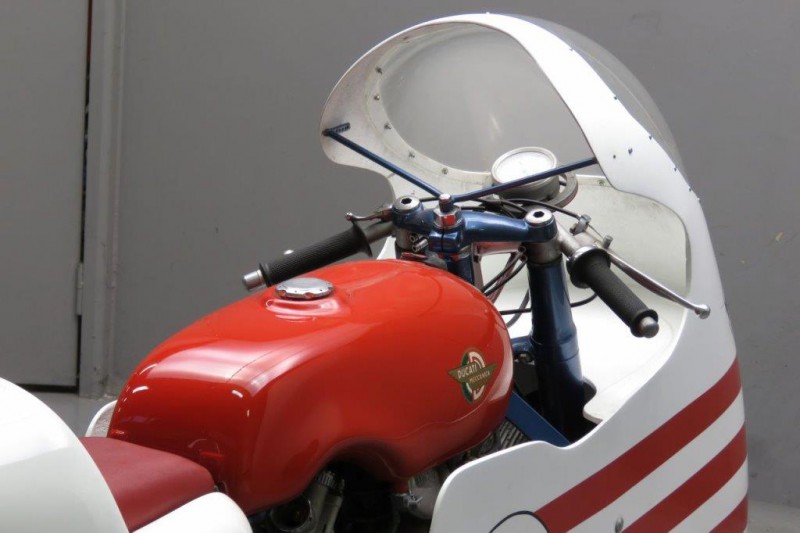 Ducati Meccanica decided to hire ex-Bologna University scholar Fabio Taglioni of FB Mondial in the mid-1950s todesign a new engine capable of winning out of the box.
Upon joining, Taglioni undertook the design of what was to become the 98cc Gran Sport or Marianna.
This machine dominated its class in long distance street racing and was the foundation for Borgo Panigale’s overhead cam single and twin cam, and desmo singles that helped make Ducati
into the winner it is today.
The new SOHC bevel racing model was first a capacity of 100cc in 1955 and was a convincing class winner.
Soon a 125cc version followed with equal success, opening the budget for a proper 125 Grand Prix race bike.
Introduceding 1956, the first Bialbero used conventional rocker arms, the valves opening and closing via coil springs.
This design proved unreliable and so in short order a “desmodromic valve closing” design was created.
The adoption of the Desmodromic system in Ducati single-cylinder racing engines was a turning point in Ducati’s history.
With the Desmodromic valve system in 1956, Ducati single cylinders reached the height of their development.
The 125 Triple Camshaft Desmo (Trialbero) developped in 1958 and designed by Taglioni, marks the first truly recognizable Ducati.
Its creation was a defining moment in the history of motorcycle engineering.
The description of the desmodromic system is relatively simpel  “The main purpose of the system is to force the valve to follow the distribution diagram as closely as possible.
Energy losses are virtually negligible, performance curves are more uniform and reliability is improved.”
From a technical perspective, this was one of the most fertile periods in the history of motorcycle racing.
In fact, the international regulations, unlike those of today, gave a free hand to designers, who were able to try out every conceivable approach.
Just one year before its withdrawal from official participation in competition, the Bolognese manufacturer not only came out with this fantastic Triple-camshaft single-cylinder Desmo 125, but also developed the twin-cylinder which came in third at Monza.
At the same time, Taglioni was designing a double-camshaft four-cylinder!
This extremely rare Ducati 125cc Triple Overhead Camshaft (Trialbero) has been restored and is in very good running condition.
Type    Single cylinder 4-stroke
Displacement  124,6cc
Bore and Stroke 55,25 x 32mm
Compression ratio  11:1
Lubrication  Wet sump
Valve timing system Triple Overhead Camshaft twin valve desmodromic
Carburettor  27mm