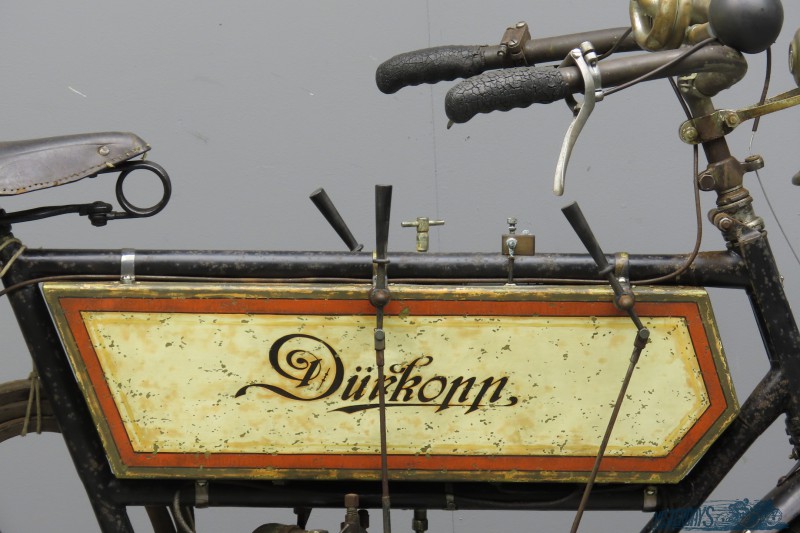 Founded in Bielefeld in 1867 by Nikolaus Dürkopp, the factory was at first active in the production of sewing machines.
Car production was taken up on a small scale in 1897 and in 1901 the first motorcycle left the factory.
As the factory had already extensive production facilities for car and sewing machine manufacture, most parts were made in-house.
Year by year the motorcycles were improved and the cubic capacity was stepped up. In 1905 even a four cylinder model was presented.
By 1908 however, motorcycle production ended because of the increasing demand for cars and the fact that car production was more profitable.
In the 1920’s the Dürkopp automobile factory employed over 6000 workers building a range of cars which included models from 1500 cc to over 6 litres.
In the thirties the production of light motorcycles was taken up again.
Post-war production commenced with a motorized bicycle powered by a 48cc JLO engine delivering power to the rear wheel by roller drive.
Durkopp’s most successful post-war model was the MD150, introduced in 1951 and remaining in production until 1954.
Almost 18,000 MD150 machines were built.
Some years later the Diana scooter was brought out, another successful product of the Bielefeld company.
Production of the Diana and all motorcycles ended in 1961.
From that time on the firm concentrated on making sewing machines and conveyor belts for the garment industry.
After a series of mergers, the company was bought by Chinese investors in 2005.
Veteran Dürkopp motorcycles are pretty rare indeed.
This early survivor is the light 1¾ HP model with cast-iron crankcase and Dürkopp’s own carburettor.
The machine has battery-coil ignition, front wheel stirrup brake and rear wheel band brake.
The saddle is fitted with an extra spring system and the handlebars are wider than the usual bicycle-type of the period, giving a more relaxed ride.
Accessories include a period bulb horn and an unusual “Scharlach” acetylene lamp that is fitted with a cone-shaped protector.
This rare machine was found with its petrol tank in a dilapidated condition.
The rest of the motorcycle was in a remarkable state of preservation so it was decided, some twenty years ago, to give the remanufactured petrol tank a finish that would match the rest of the machine.
We think this was done with remarkable craftmanship.