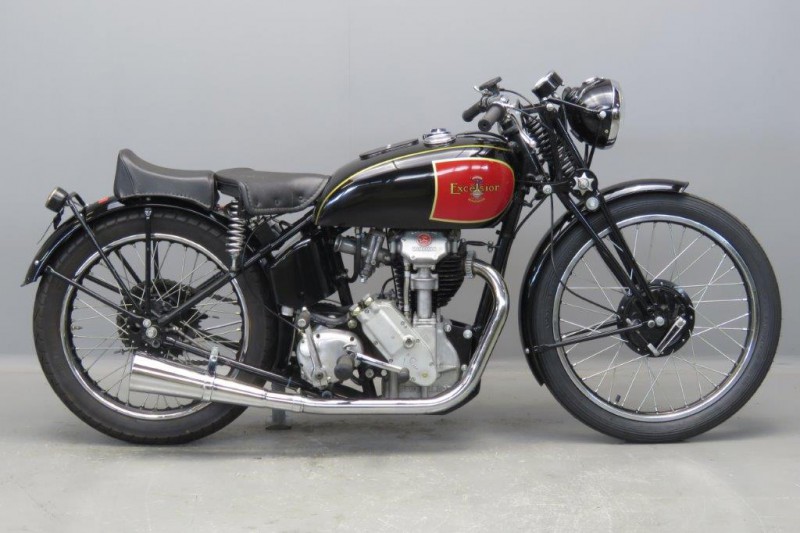 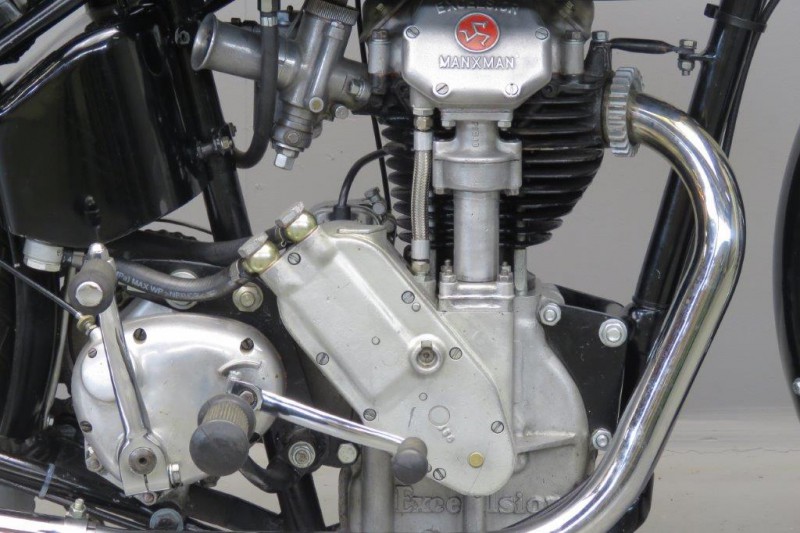 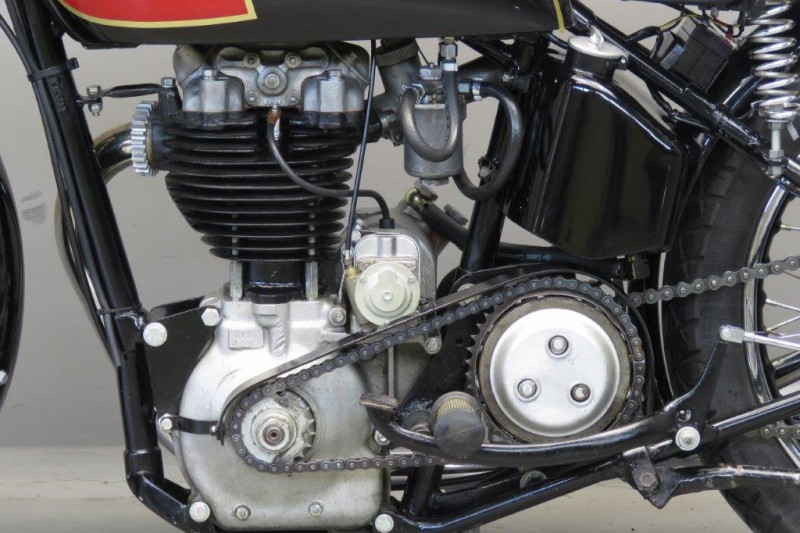 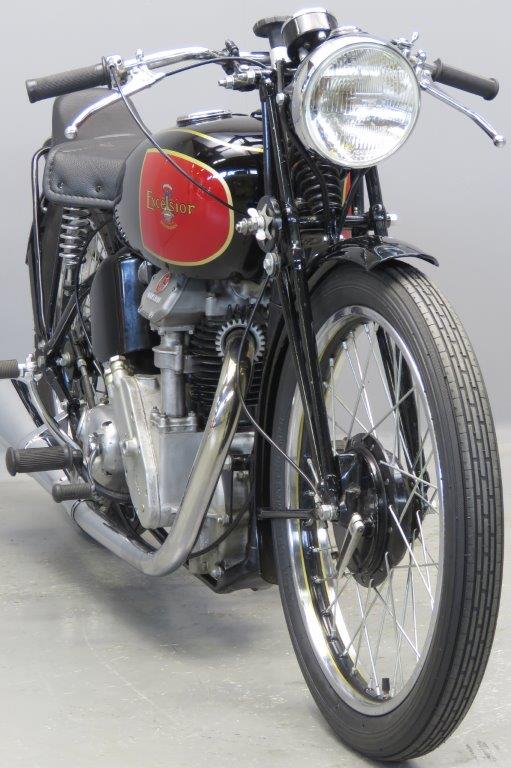 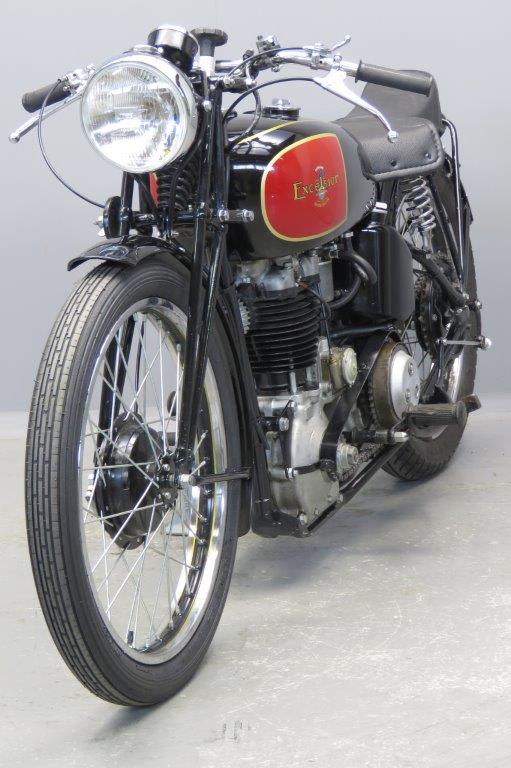 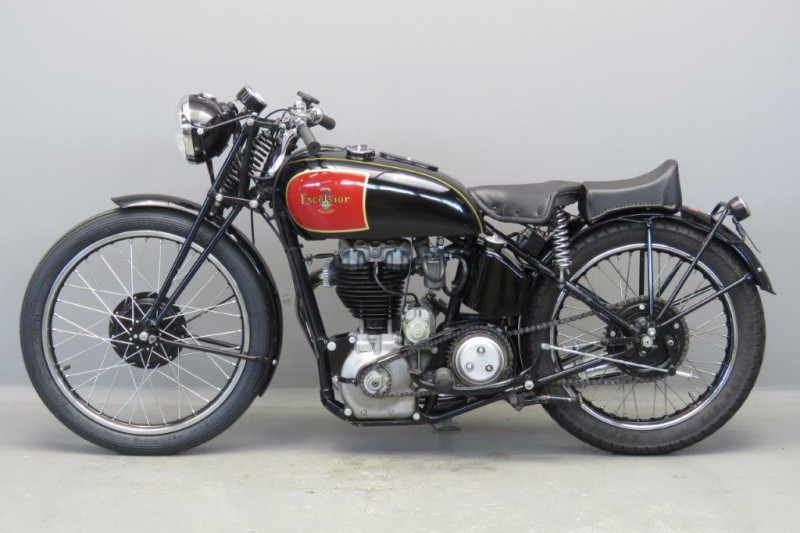 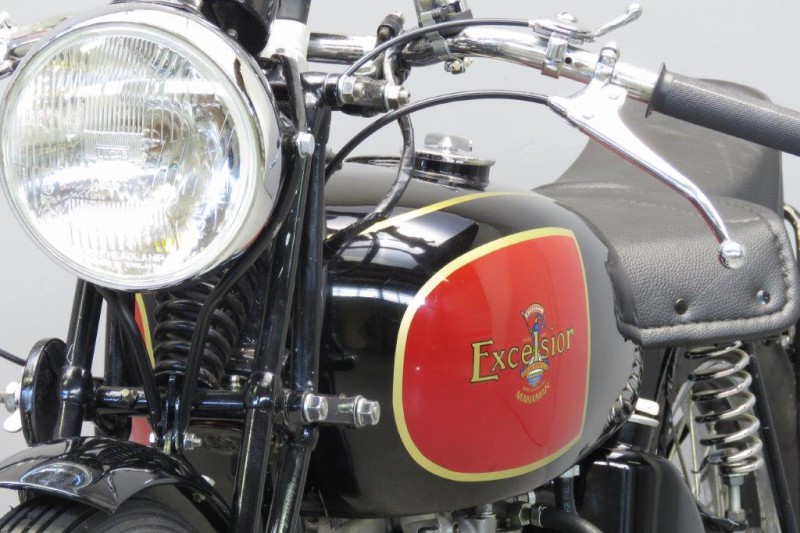 In the twenties the Midlands company of Reginald Walker and his son Eric took over the  Coventry firm of Bayliss and Thomas  that produces the  “Excelsior” motorcycles and moved the plant to Birmingham.
Eric Walker was a racing enthusiast and he promoted the use of Excelsiors in races.
This led to the development of a Blackburne-made four valve pushrod operated  racing engine in 1933 – which won the Lightweight TT- ,  but which was superseded by a less complicated and sturdier engine of their own design, the Manxman.
This engine was produced in capacities of 249, 348 and 498 cc. The 249 cc model was the most highly developed and the most successful one.
Although it never won a TT, the Manxman enjoyed considerable success in international racing and the Manx Grand Prix, Denis Parkinson winning the Lightweight race three times on the trot between 1936 and 1938.
This 1939-model CXC engine is the culmination of five years intensive development in Excelsior’s experimental and racing departments and represents the 350 Manxman engine in its ultimate specification. ‘CXC’-prefixed 350cc engines incorporated hairpin valve springs and a crankcase of improved design, and were destined for installation in late 1938 H12 and 1939 J12 models.
Evidence suggests that fewer than 60 ‘CXC’-series engines were built, though not all were fitted to machines before production ceased, the highest engine number currently known being ‘CXC 160’ (source: Bonhams).
Although the Excelsior factory records were destroyed during WW2, sufficient data has survived concerning J12-series Manxmen to date the production of engine number ‘CXC 158’ to circa end 1938, early 1939. Thus engine ‘CXC 158’ would have been dispatched by the Excelsior factory as a 1939 model.
According to the Excelsior Manxman Register, there are only eight motorcycles with the correct frame numbers known to survive from the 1939 production year, while the tally of surviving ‘CXC’-sries engines – previously 13 – was reduced to 12 following the National Motorcycle Museum fire (the surviving engines include those in the complete motorcycles).

Rod Coleman  (born 19 June 1926) was a Grand Prix motorcycle road racer from New Zealand who raced for AMC (Associated Motorcycles)riding AJS motorcycles both at the Isle of Man TT and in the Grand Prix World Championship in Europe, between 1951 and 1956.
He was the first official entrant from the New Zealand Auto-Cycle Union in the 1949 Isle of Man TT  but crashed in practice and in 1954 became the first New Zealander to win a TT.
Rod Coleman is the son of Percy “Cannonball” Coleman from Wanganui NZ who first raced at the 1930 Isle of Man TT but retired from the 1930 Junior TT and senior TT Races.

After the races Rod bought all Excelsior Manxmans he could buy and had them shipped over to NZ. He built them up and sold three to a museum in America.
Rod Coleman had built around 24 Manxman Specials.
ENGINE CXC 158 has only been run approx.1 hour since its 4 year rebuild and has completed only a few break-in kilometres so  she still needs running in.
She has been rebuilt to a high standard using many genuine and Rod Coleman parts.
Genuine rebuilt engine type CXC158:
Cylinder modified and head ported and polished.
New valves (Norton) and guides.
New racing type camshaft and rollers.
New piston rings.
Performance estimated around 29 BHP.
Genuine Rod Coleman fuel tank and frame, matching wheels and brakes.
Armours exhaust with removable baffle.
Brakes use special racing brake liners.
Rebuild BTH magneto
The bike has the benefit of a lighting set.
This EU road registered Coleman Manxman is in good condition; it has been fitted with a replacement gearbox but the original Albion comes with the machine.