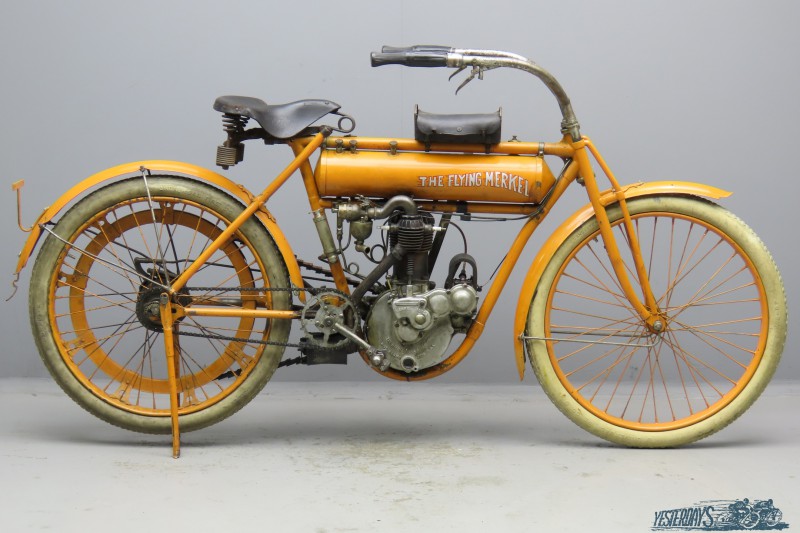 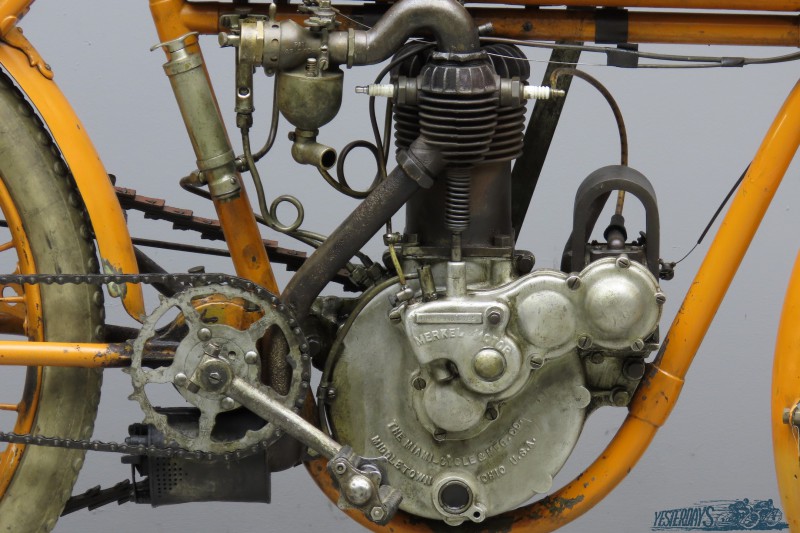 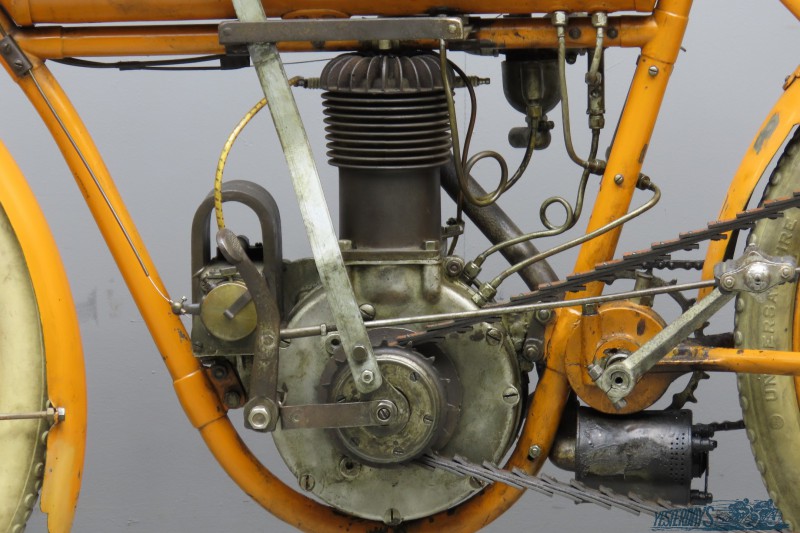 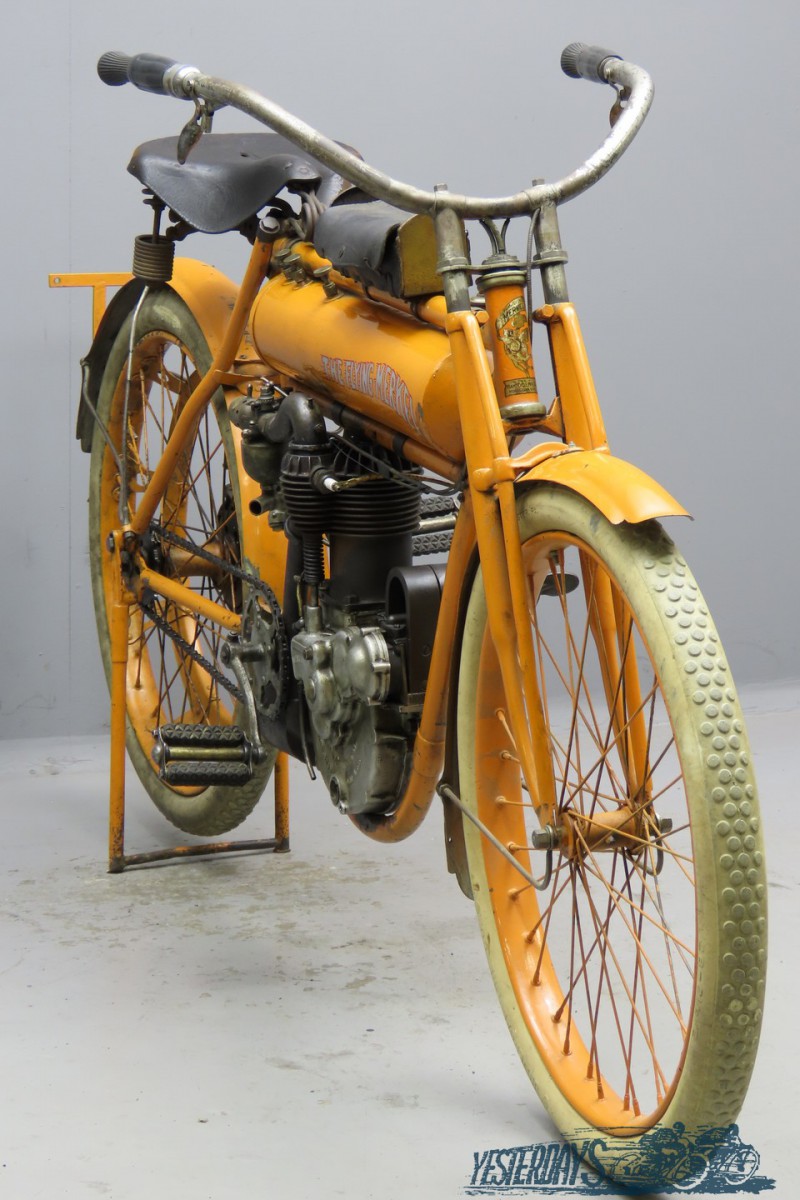 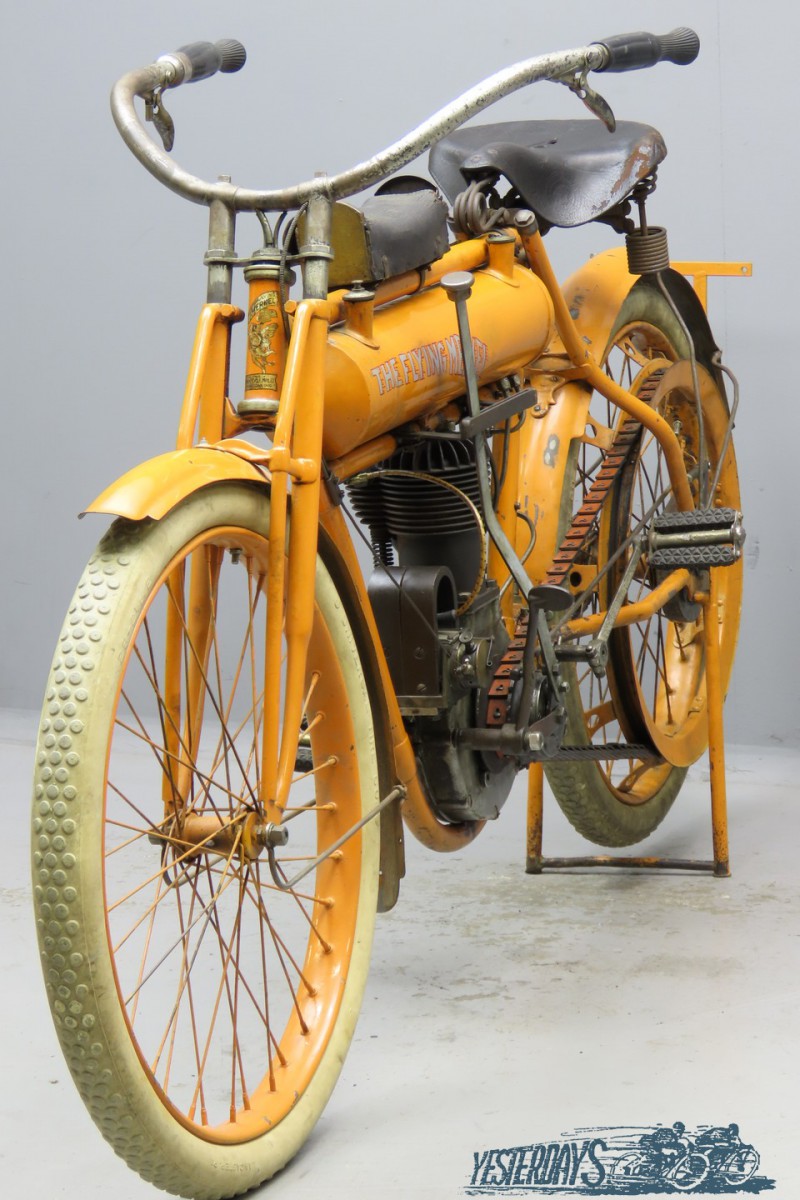 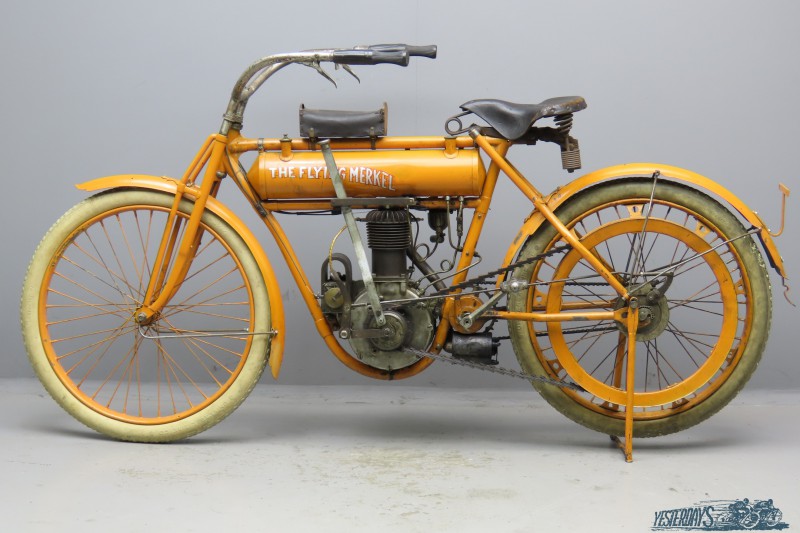 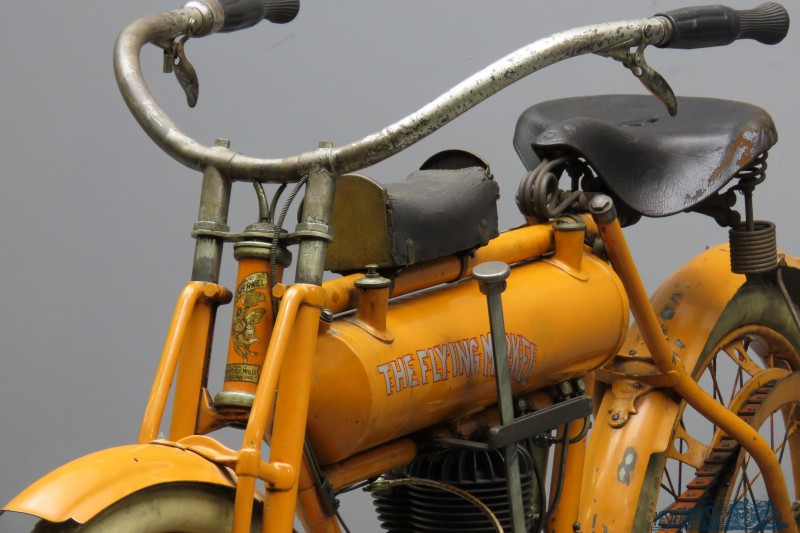 For model year 1911 a 499cc  single and three V-twins were catalogued, in 6HP (883cc) and 7HP (998cc) versions.
The 7HP model was also available in racing trim. Prices were respectively  $250, $300 and  $325; the price of the racer was not given.
The model we present here has the usual Merkel features of both front and rear springing.
There’s a free engine pulley on board that makes it possible to start the engine on the stand.
Originally this pulley was controlled  with the left hand side handlebar lever, but at some point in the machine’s history a conversion was made to a hand lever.
This was easier to operate, as the Merkel people duly  found out themselves  because the 1913 catalogue  shows and describes the free engine control as “operated by side lever with positive notched segment control”.
The ignition is by Bosch magneto and the ignition advance is regulated by the left hand side twist grip.
The right hand side twist grip controls the throttle. The oiling system is well- thought out.
An article in “Cycle and Automobile Trade Journal” describes it as follows: “Particular attention is directed to the new sight feed oiling system.
The oiler has a glass for observation, so as to determine the actual amount of oil being admitted into the crank case.
Also a double adjustment which permits the decreasing or diminishing of the quantities of oil admitted both on low and high speeds independently of one another. (…) An auxiliary hand pump is furnished for those who desire to enter any racing contests and also provides for the quick replenishment of oil in the crank case should it become drained for any purpose.
This auxiliary pump is placed in a convenient position to make use of while riding.”

We understand this rare early Merkel was original sold to Sweden and later became part of a private collection in Germany.
The tank top mounted toolbox appears to retain its original, somewhat faded orange finish.
The rest of the machine has been painted a number of years ago, but the mechanical condition of the Merkel is not known.
The handlebars and some other parts still have their original nickel finish.
Recommissioning will be required to make this rare survivor ready for use on the road.

The Merkel  brand first appeared in Milwaukee,  Wisconsin in 1902, when Joseph Merkel set up shop producing single cylinder motorcycles.
By 1905 he had decided to engage in competition and produced several racing machines.
Merkel’s motorcycles were to set many performance standards in the emerging American racing scene.
These machines and their riders enabled him to develop a patented spring front fork that was to become the forerunner of the modern telescopic front fork.
This fork became the instrument of choice on racing machines of other builders.
Also, the mono shock rear suspension was developed, a system still  used today on modern motorcycles.

Merkel’s slogan became: “All roads are smooth to The Flying Merkel”.
He also used ball bearings as opposed to bronze bushings in the engine.
In contrast to primitive atmospheric pressure intake valves, Merkel designed a cam-actuated mechanism and also pioneered a throttle-controlled engine oiler that long preceded Harley’s and Indian’s.
The company was purchased by the Light Manufacturing Company in 1909 and moved  to Pottstown Pennsylvania, producing machines with the “Merkel Light” and subsequently “The Flying Merkel” names.
Test rider Maldwyn Jones, an inventive mechanic and talented racer,  defeated the reigning champion Erwin G. (Cannonball) Baker in a ten mile race.
The following season Jones turned professional and won three out of four races on a machine bearing “The Flying Merkel” logo on the tank.
In 1911 the Miami Cycle Manufacturing Company purchased Merkel, and production was completely moved to Middletown Ohio.
The Merkel acquisition gave Miami the high-end product that it needed to be regarded as a premier manufacturer.
In 1914 The Flying Merkel won the National endurance