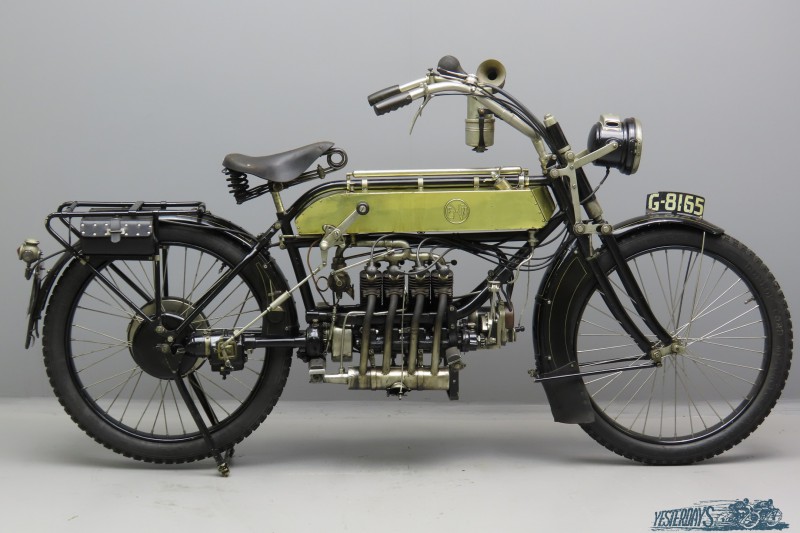 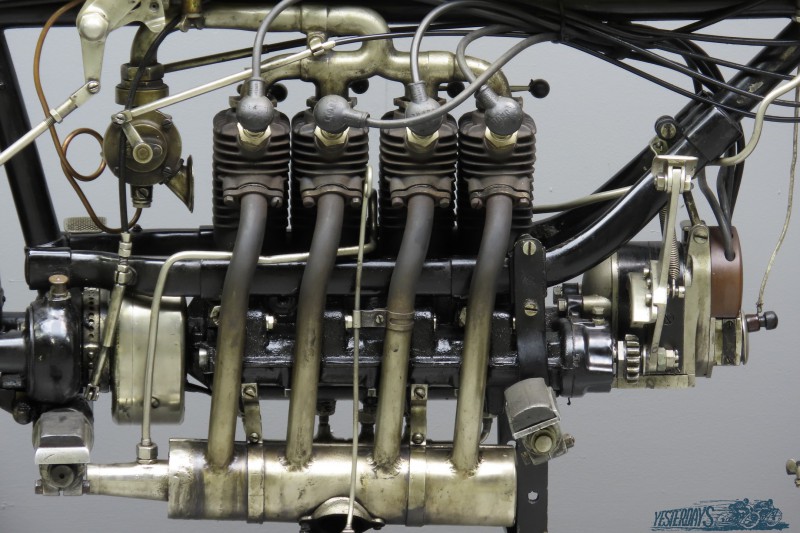 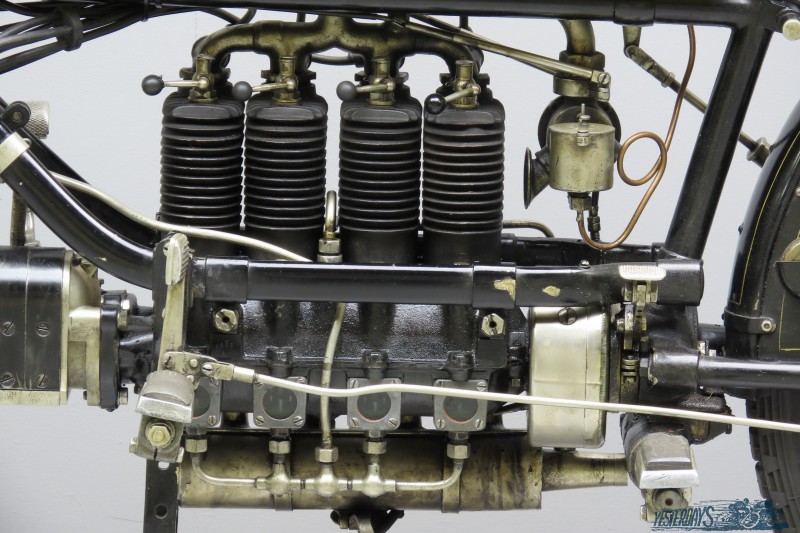 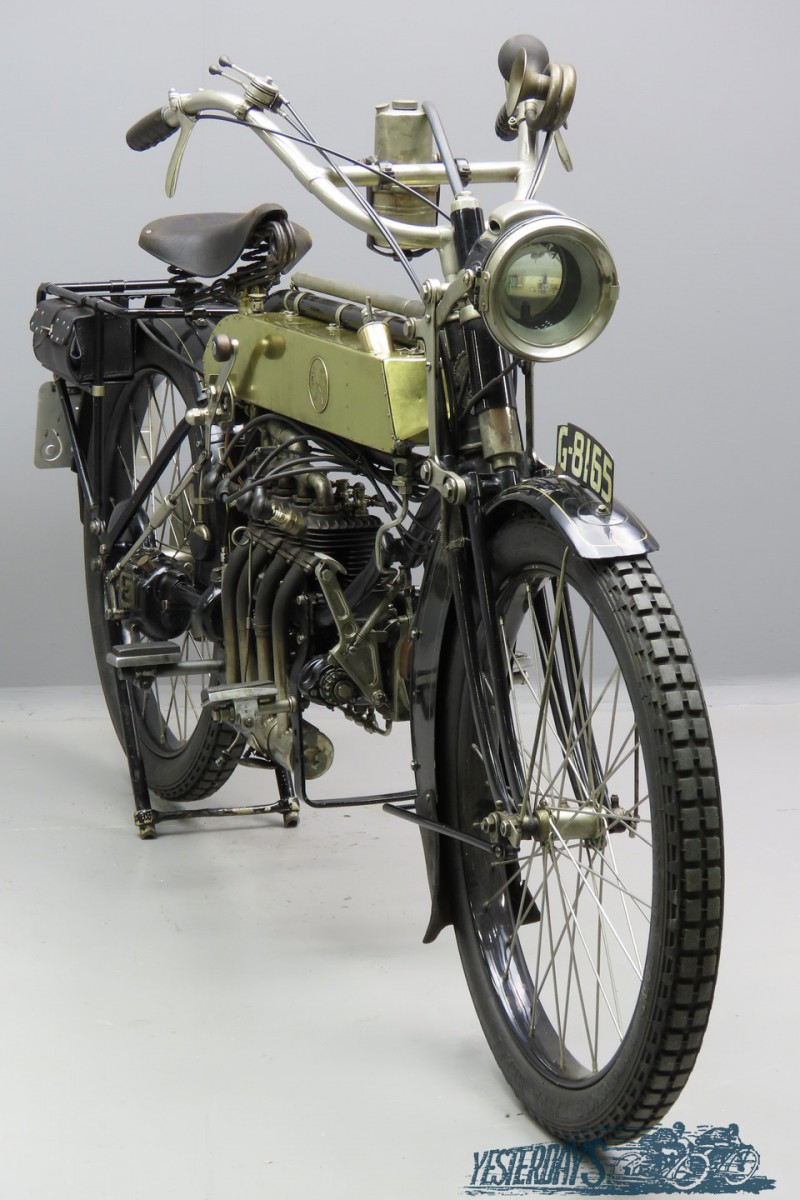 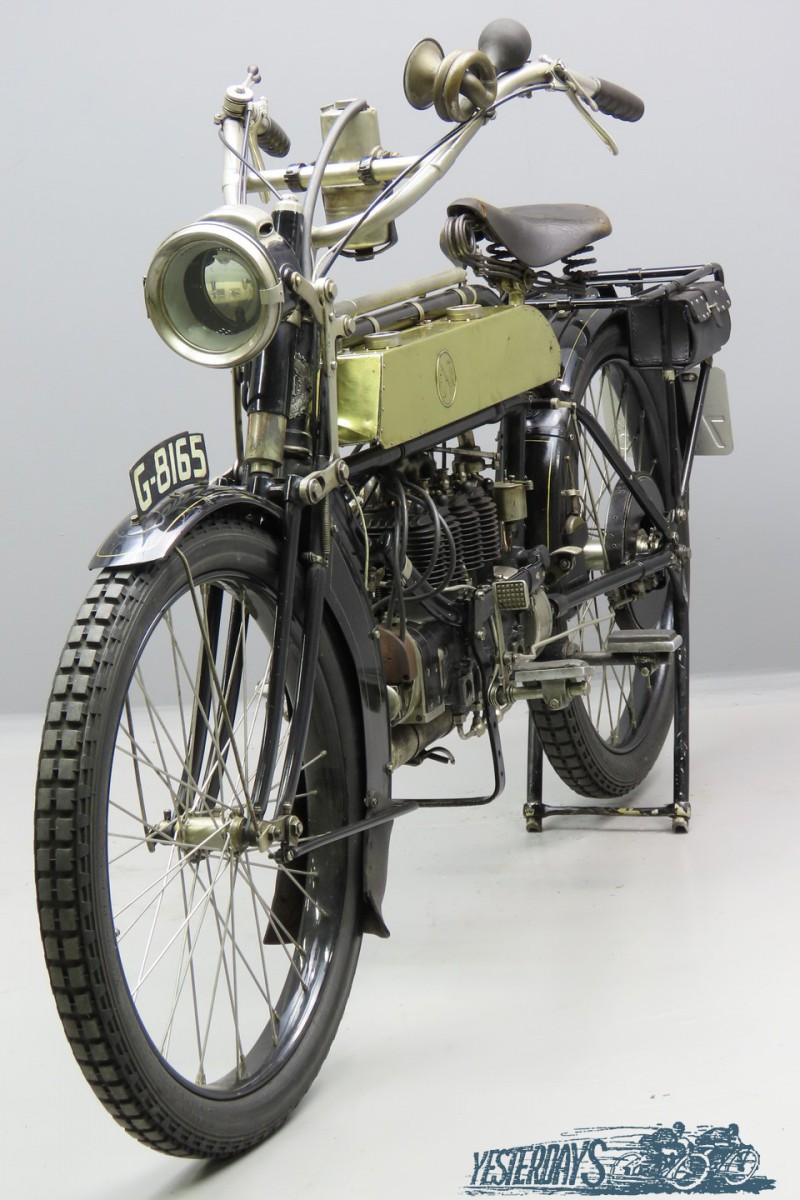 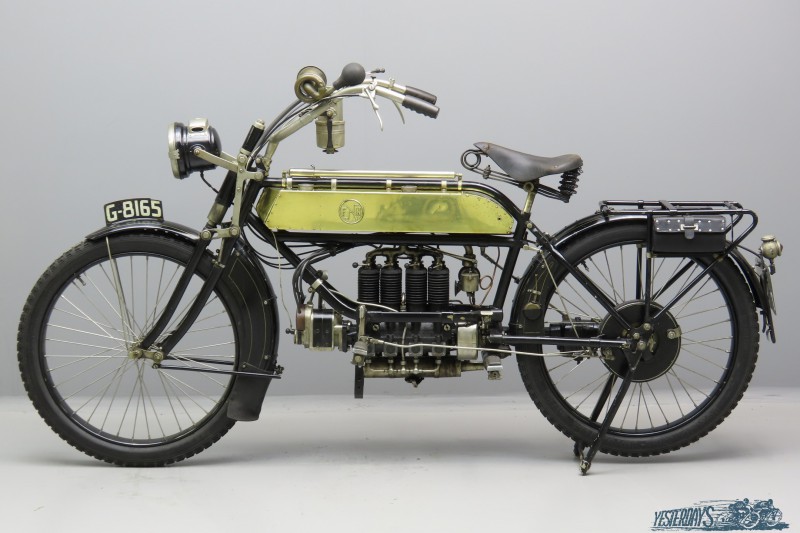 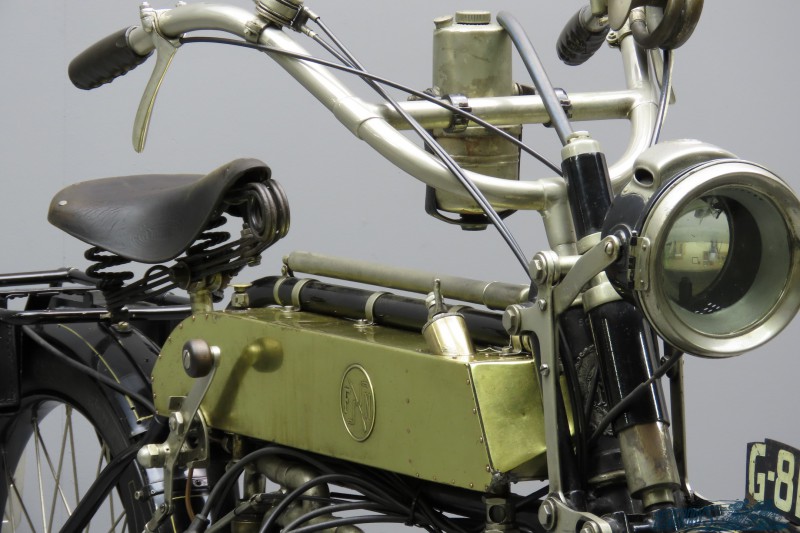 To many enthusiasts the FN four has always been one of the most appealing machines of veteran and vintage times.
Its production ran from 1905 till 1926.
The earliest type had a 362 cc engine with automatic overhead inlet valves and side exhaust valves.
The machine was single geared, had shaft drive and the top speed was about 60 km/hour.
The FN four was an immediate success and found customers all over the world; FN sold its machines in more than 40 countries. It found many customers in the U.S.A. and made Americans interested in the four cylinder concept: Percy Pierce purchased a 1908 model on one of his trips to Europe and the FN became a point of reference for the first Pierce Four in 1909.
The engine was redesigned for 1910; the 1911 model was practically unchanged , but for 1912 there were more detail modifications.
A tubular rear carrier and an independent stand replaced the very veteran combined carrier/stand used from the earliest models.
The characteristic inverted magneto and separate distributor were replaced by a Bosch ZFN4 upright magneto incorporating a distributor.
A clutch and valances on the front guard were available as options. Longer handlebars and a more substantial seat completed the new model.
The 2 speed gearbox was sold as an aftermarket accessory; many owners had one fitted and when FN brought out its 1913 model it was equipped with a 2 speed gearbox of very similar layout.
In 1913 came more substantial modifications: The frame was modified by lowering the top rail at the rear to give a lower saddle position.
Beware, however, of using a dropped frame as a dating feature: a remarkable number of early FNs were modified by specialist repairers of the day to resemble the 1913 model.
The original 1913-on dropped frame FN can be identified by their one-piece petrol/oil tank, unlike the earlier models which used two-piece tanks.
Other features of the 1913 models include the re-siting of the carburettor at the rear of the engine, a front stand and tool boxes fitted to the tubular carrier.
The kick-starter at the front of the engine is a practical feature: this was added in the course of 1913, early 1913 models still have pedalling gear.
Together with gearbox and clutch this makes the FN a very roadworthy veteran.
This well-kept machine is a reliable runner and has been in the possession of the former owner for about 40 years.
She has been used regularly in Dutch Vintage Motorcycle Club runs and was sold new in The Netherlands in 1913 to a village doctor in Westzaan, close to Amsterdam.
The G-8165 registration belonged to an early owner of the machine, a Mr. Cornelis Poel from the nearby town of Zaandam.
This practical veteran comes with its original tool roll, Lucas acetylene lighting and bulb horn.