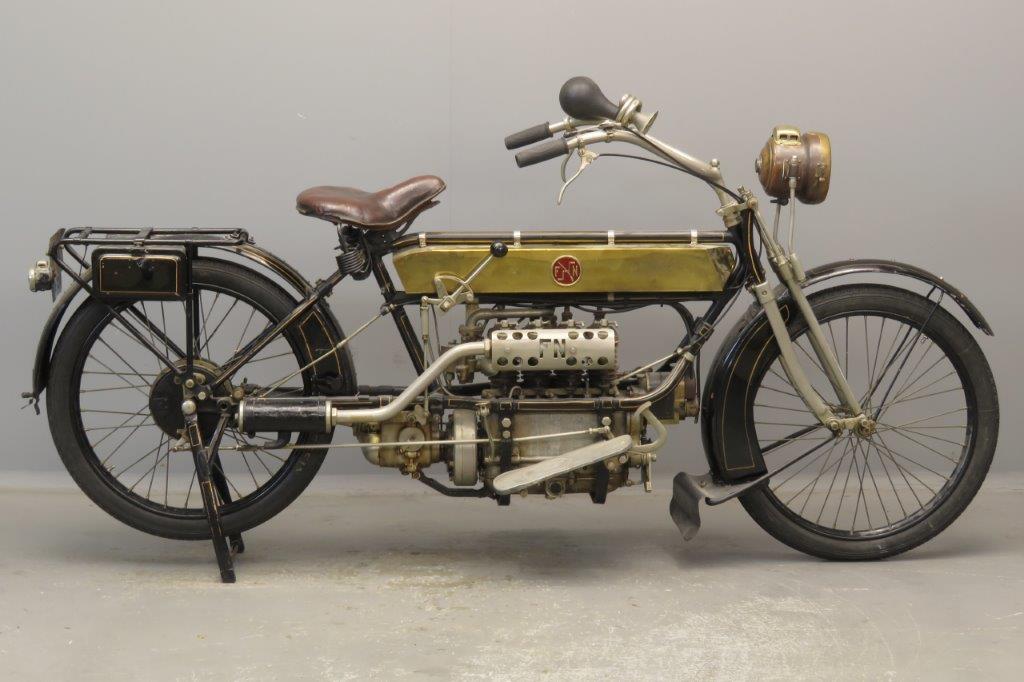 FN   ca. 1919   “Type 700” 748 cc four cylinder  T-head side valve  frame # 71080  engine # 442
For the  1914 model year FN-4  engine was completely redesigned: it grew to 748 cc with side valves on opposite sides of the cylinder, the so-called T-head configuration.
The machine had a sturdy clutch and  a three speed gearbox.
Soon after the war the production was resumed with a  slightly updated 1914 model.
In the early twenties the  “700” became the “750T” when the valve configuration was changed from side valve to overhead inlet valve.
In the autumn of 1923 the model M 50 was marketed: the  four  got chain drive and the flywheel was enclosed by the crankcase, to name a few new features.
But the days of the FN four were almost over now: the new and successful 348 cc OHV single M 60 was much cheaper and almost as fast.
At the end of 1926 FN four  production came to an end.
This sturdy vintage four was restored in the late fifties or early sixties by Henk van Veen and his father.
Henk started importing the German Kreidler mopeds in The Netherlands and later on  formed the successful Van Veen racing team and developed the Van Veen OCR 1000 with Wankel engine.
The newly restored machine was shown in the early sixties on the RAI car and motorcycle show in Amsterdam.
It has  probably  seen very little use  since then:  it was dry stored and is still in good condition.
Download PDF