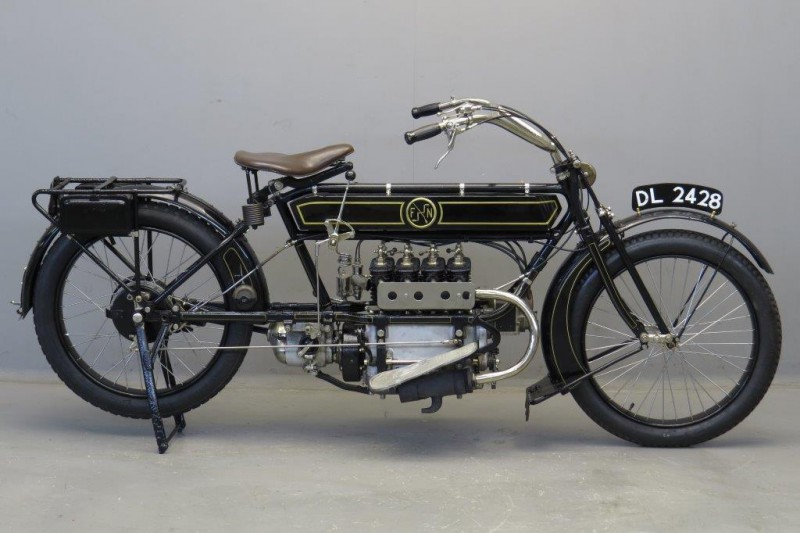 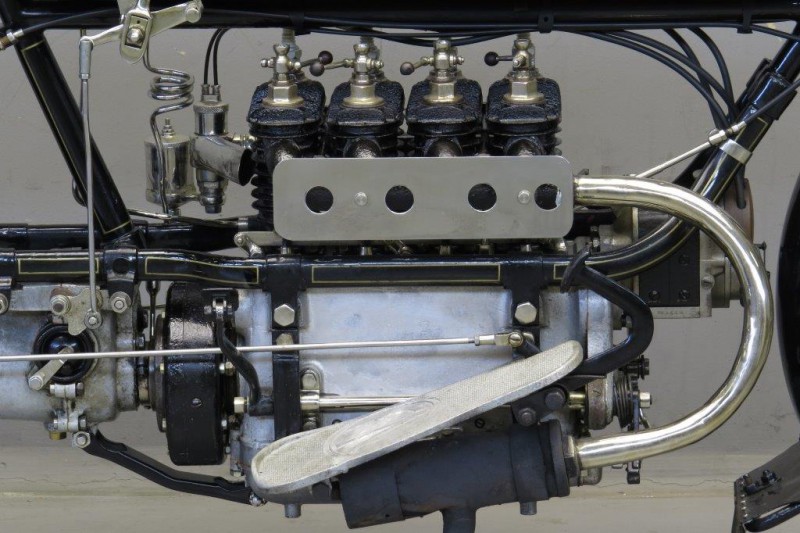 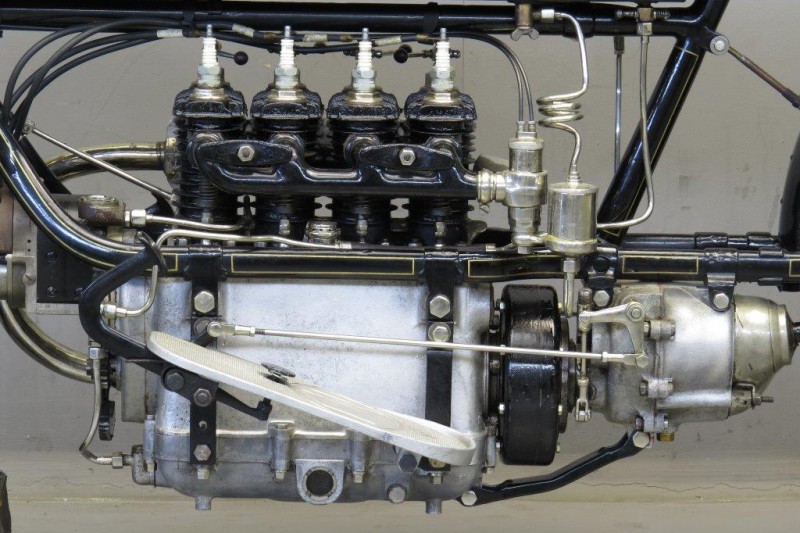 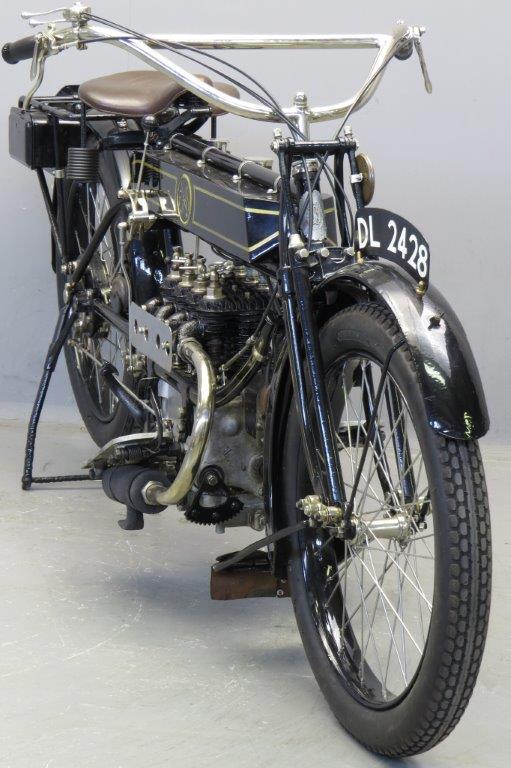 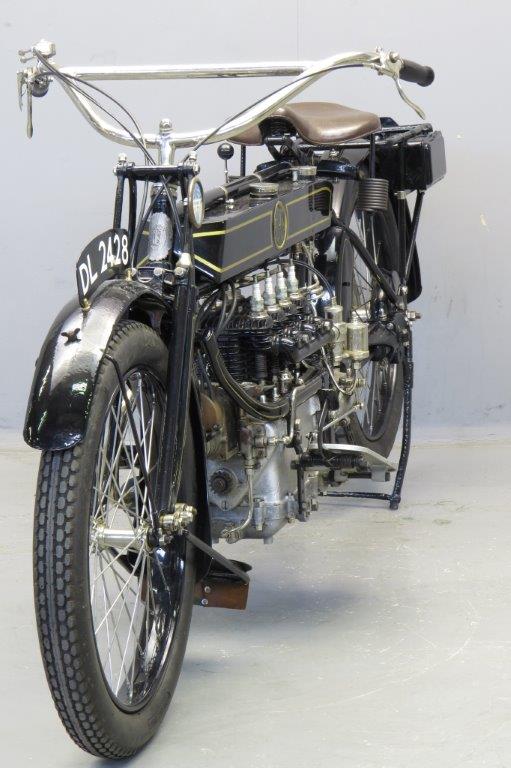 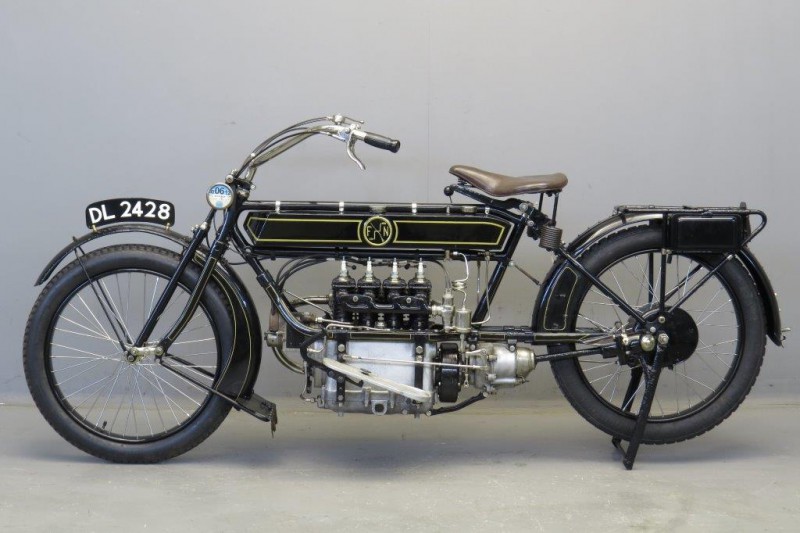 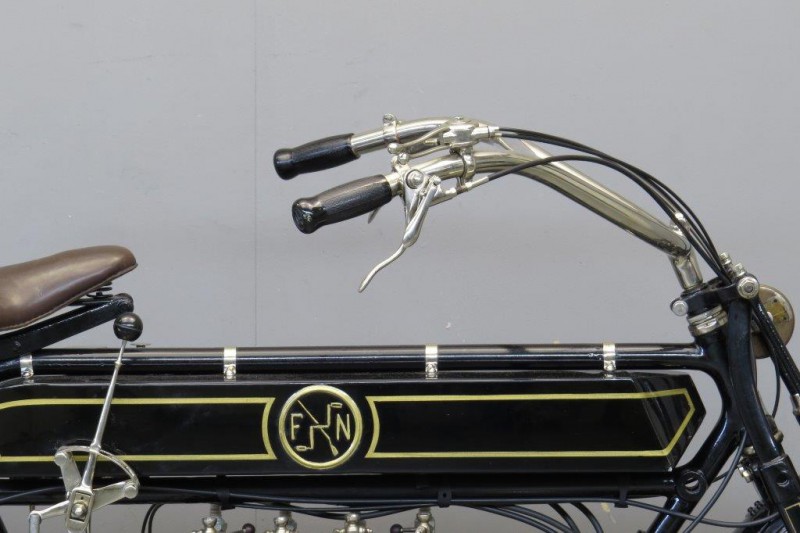 To many enthusiasts the FN four has always been one of the most appealing machines of veteran and vintage times.
Its production ran from 1905 till 1926.
The earliest type had a 362 cc engine with automatic  overhead inlet valves and side exhaust valves.
The machine was single  geared,  had shaft drive and the top speed was about 60 km/hour.
The FN four was an immediate success and found customers all over the world; FN sold its machines in more than 40 countries.
It found many customers in the U.S.A. and made Americans  interested in the four cylinder concept:  Percy Pierce purchased a 1908 model on one of his trips to Europe and the FN became a point of reference for the first Pierce Four in 1909.
The design was developed to 493 cc and the machine got a proper clutch and gearbox in the years before the War.
In 1914 the engine was completely redesigned: it grew to 748 cc with side valves on opposite sides of the cylinder, the so-called T-head configuration.
The machine had a sturdy clutch and  a three speed gearbox.
Soon after the war the production was resumed with a  slightly updated 1914 model.
In the early twenties the  “700” became the “750T” when the valve configuration was changed from side valve to overhead inlet valve.
In the autumn of 1923 the model M 50 was marketed: the  four  got chain drive and the flywheel was enclosed by the crankcase, to name a few new features.
But the days of the FN four were almost over now: the new and successful 348 cc OHV single M 60 was much cheaper and almost as fast.
At the end of 1926 FN four  production came to an end.
This sturdy FN was first registered on the Isle of Wight where it remained till the fifties.
It was taken to the mainland by a collector of cars, tractors and farm machinery and stayed in this person’s barn for some 50 years.
The former owner was able to purchase the machine and subsequently restored it.
This good-looking  FN  four  is fitted with Bosch magneto and AMAC carburettor.