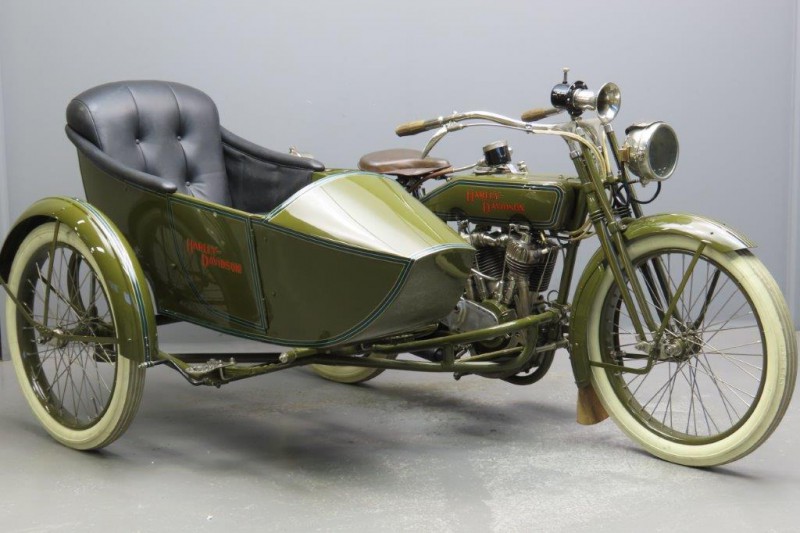 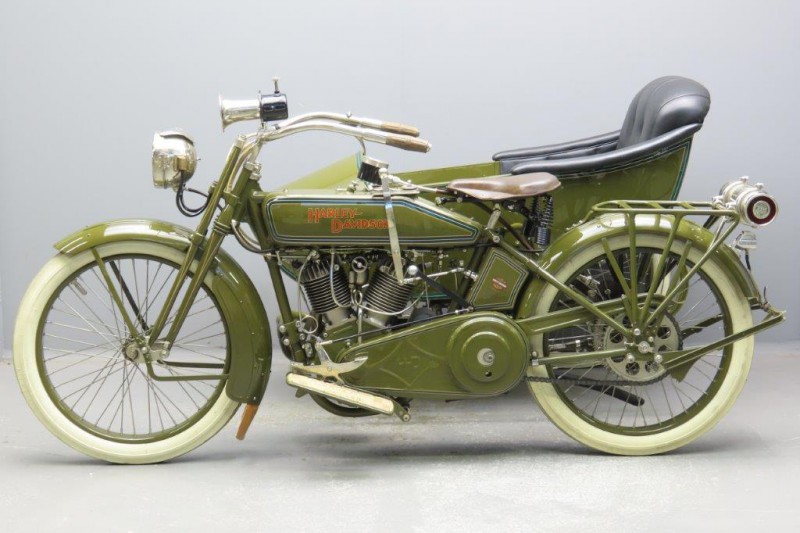 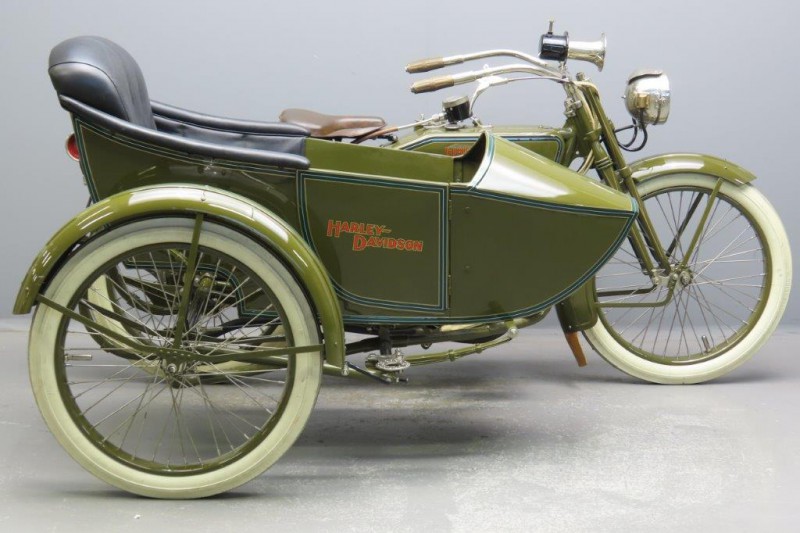 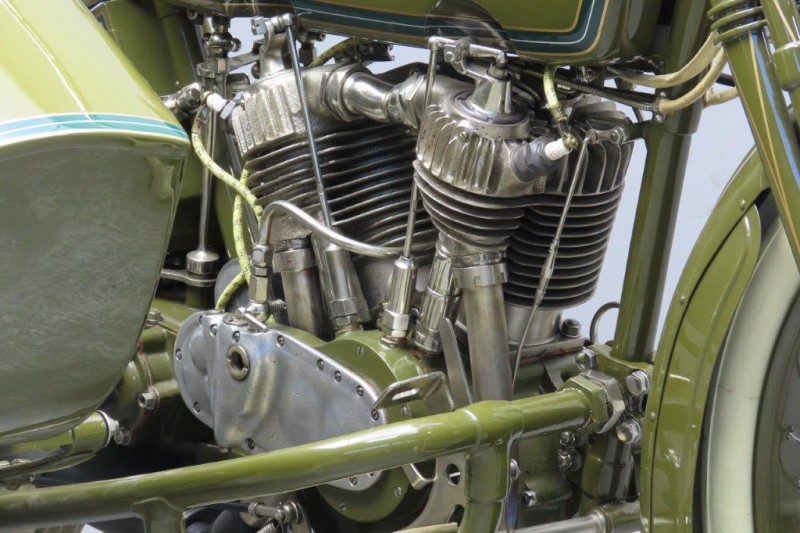 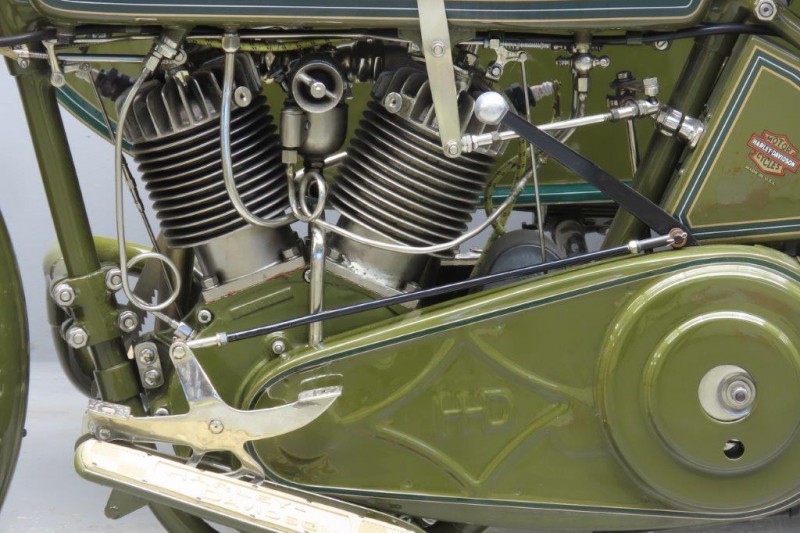 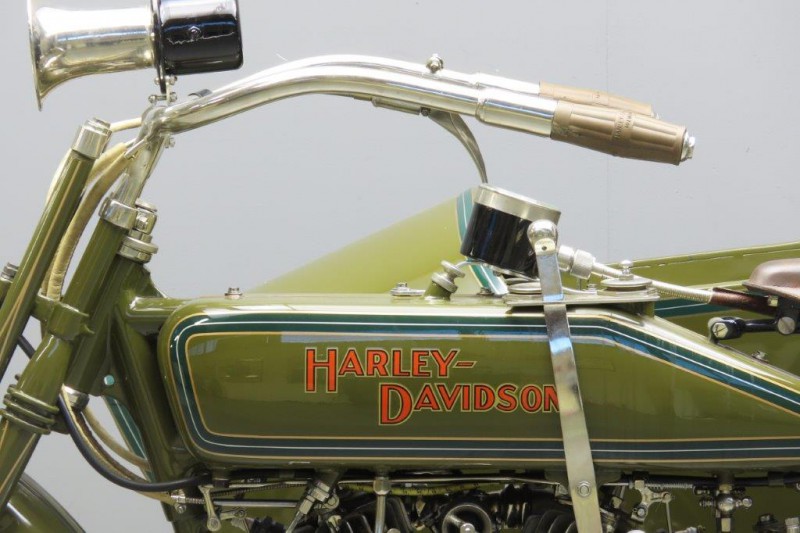 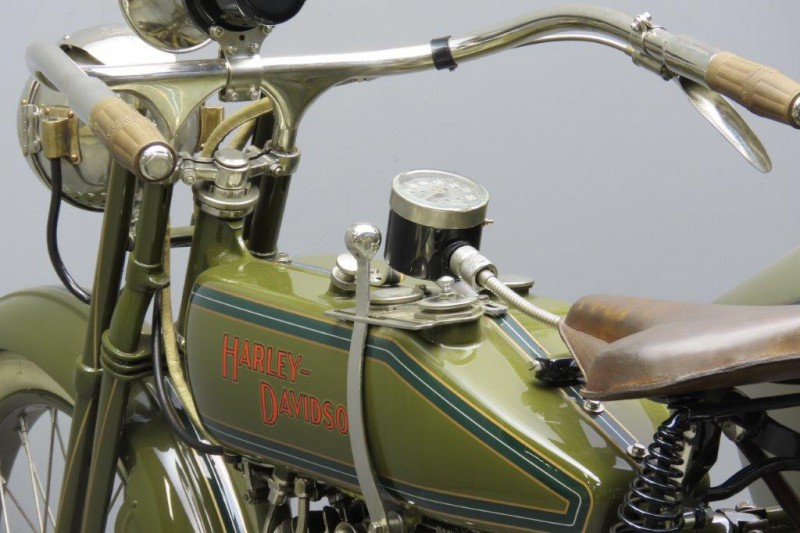 In 1917, the first year of war for the U.S., olive green became the standard colour for all Harley Davidson machines.
The twin could be ordered with magneto ignition (“F”) or battery and coil ignition (“J”). Changes to the valve gear led to extended valve overlap, resulting in significantly more power.
The output now was 14 HP @ 3,200 rpm. Compression ratio was relatively low at 3.75:1 and the unladen weight of the solo machine amounted to 150 kg.
The 1917 catalogue was by no means shy about the engine’s performance:
““ Pep” is the one word which best describes its performance.
A giant in power, this motor has the “jump”, “punch”, “getaway”, and that extra burst of speed that will make it the talk of the trade.
Such snap has never been built into a motor before. Slowed down on a hill it will pull, and keep on pulling.
We believe this motor will outrun and outpull any other stock motor.
We make this statement because the Harley-Davidson has won every big race of the past season, and each one of these contests has taught us something new about motor performance, and all of this experience has been built into the 1917 twin motor.”
The magneto ignition model “F” was fitted with acetylene lighting and on this splendid combination the light is provided by a Prest-O-Lite cylinder with Solar lamp.
As a number of parts of the combination were in a substandard condition, the restorer decided to replace the sheet metal, sidecar body and some other parts with the best available high-quality aftermarket items.
Accessories on this impressive combination include a handlebar-mounted push horn and Corbin speedometer.
This beautiful vintage machine has been restored with great attention to detail. She was featured in the Spanish magazine LA MOTO, nr 279 of July 2013 (article available) and won awards in various Spanish shows:
Best bike of the show, Santo Domingo meeting (Madrid), September 2019
Old bike of the show, Santo Domingo meeting (Madrid), September 2017
XXX Moto Club PISTON Rally (Santander, Spain), special mention to the best bike exhibited during the thirty anniversary of the club, September 2017
Classic Car of Madrid meeting, special mention from the FEVA (Spanish Federation Vehicle Antiques) exhibition in the show, February 2019