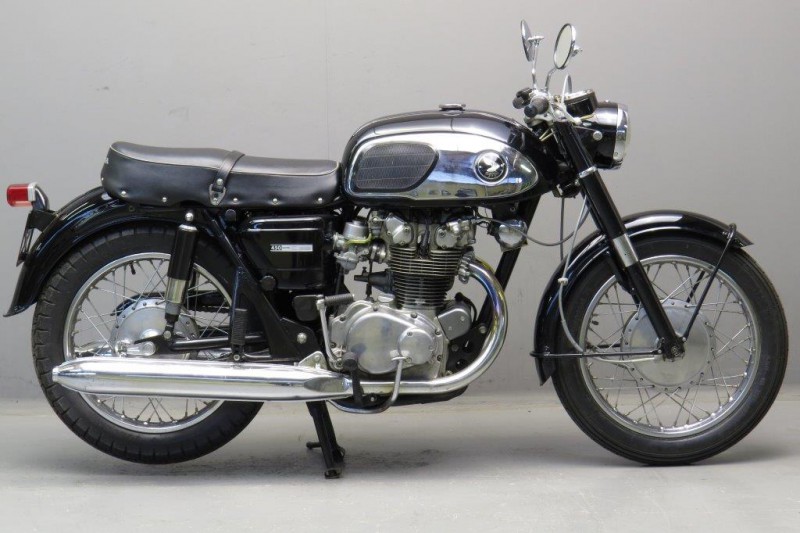 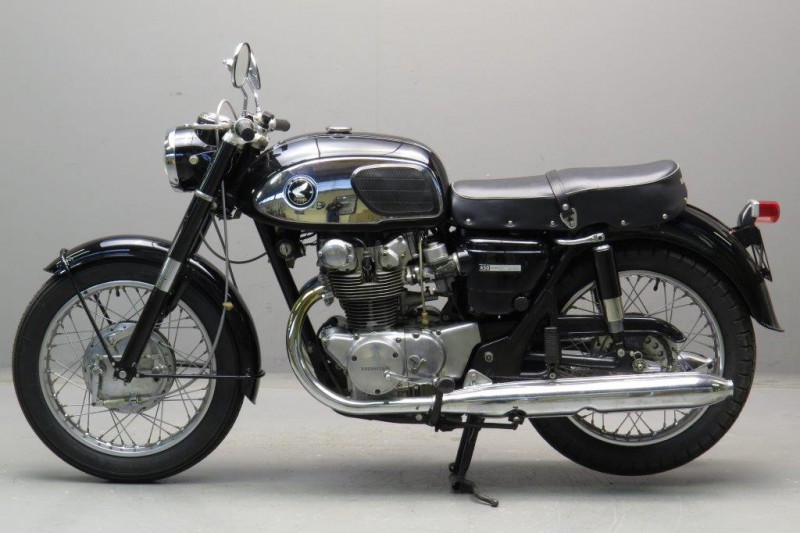 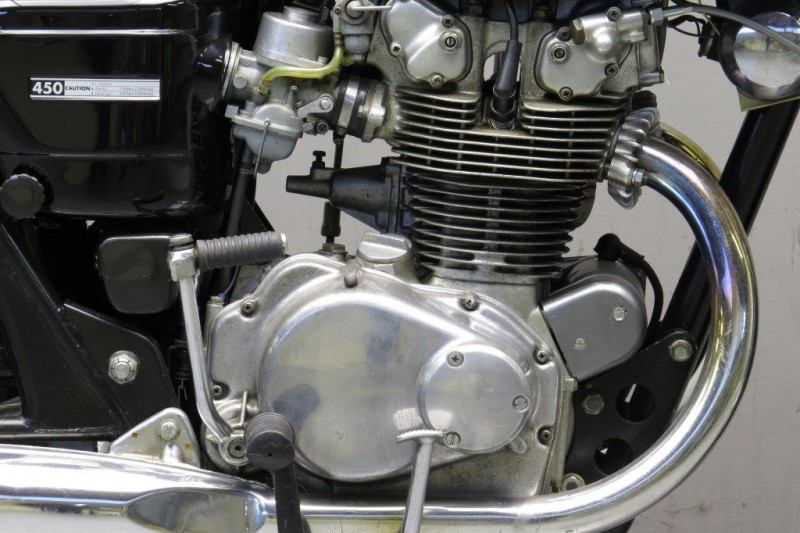 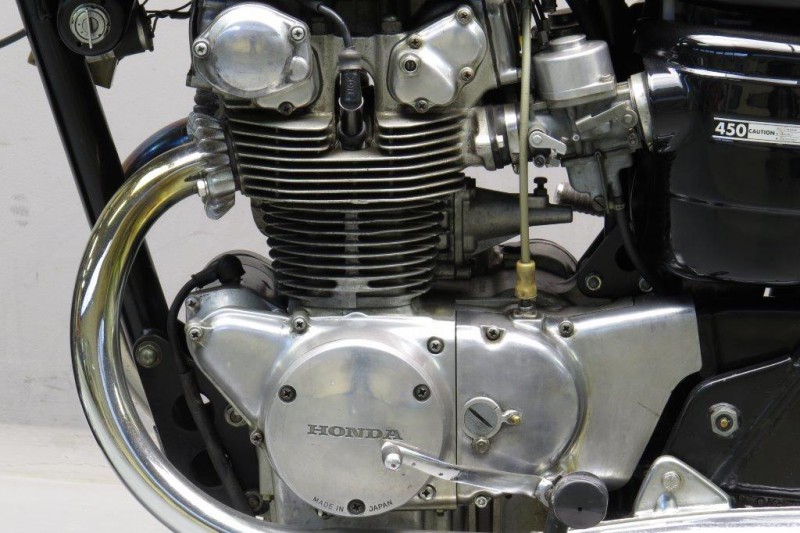 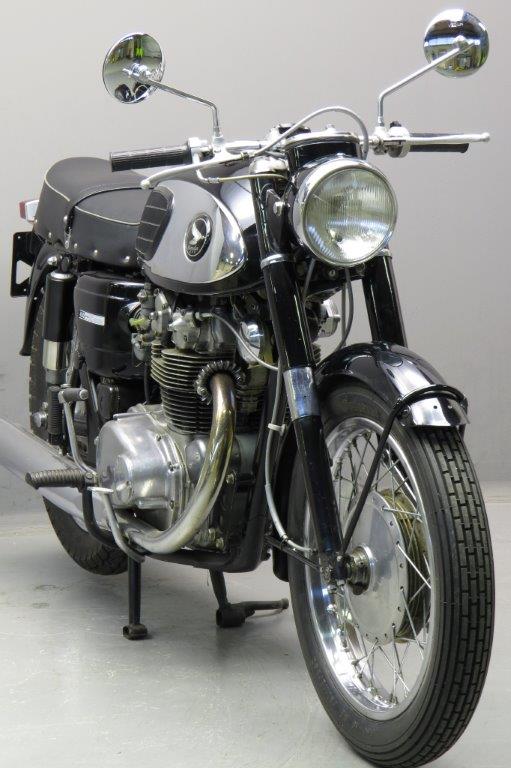 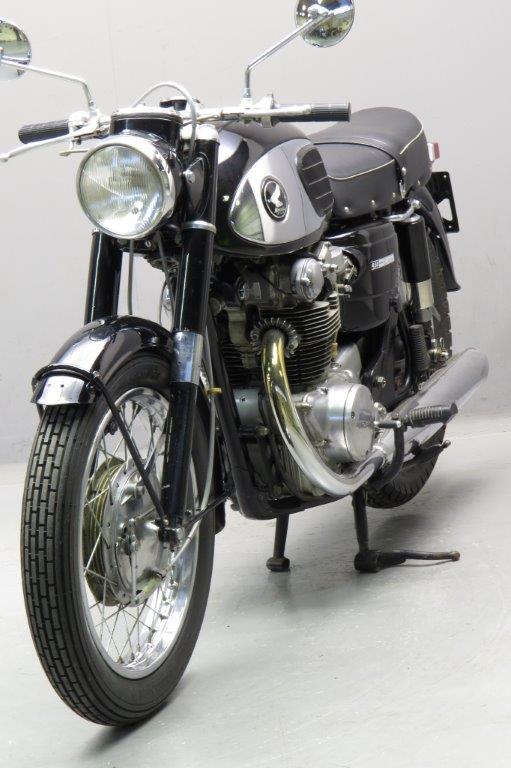 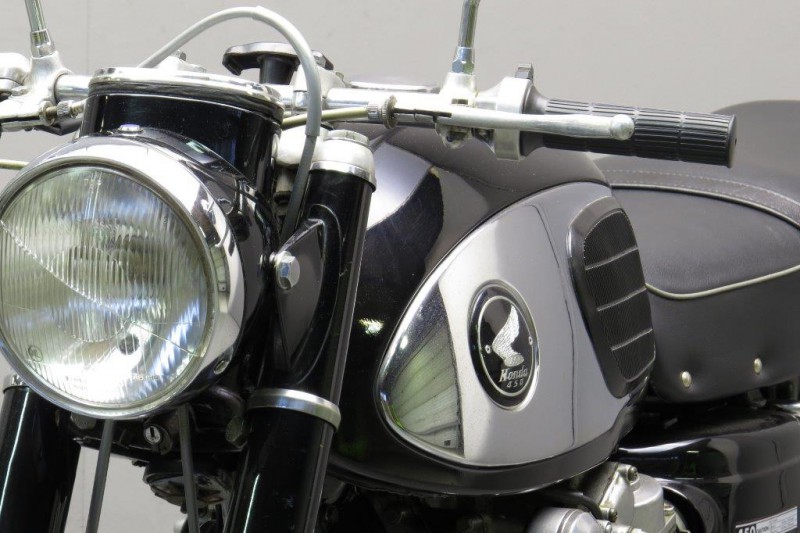 The Honda CB450 was the first ‘big’ Honda Motorcycle with a 444cc 180° straight twin, dual overhead cam engine producing 43-45 horsepower (more than 100 HP/ litre).
Appearing first as a 1965 four-speed K0 model, and 5 speed transmission in the 1968 K1 model.
K0 models, often known as ‘Black Bomber’, were notable for their distinctive large chrome-sided fuel tank with the same common ‘family’ styling used in the S90 an CD175.
In Canada the K1 model was marketed as the ‘Hellcat’.
The CB450 was first shown in the UK in September 1965.
For publicity ridden by (the late) Allan Robinson, a Honda staff member, recorded a standing-start kilometer time of 30.1 seconds and a terminal speed of 100 mph (160 km/h).
Honda (UK) planned a further publicity event by entering Mike Hailwood as one of the riders in the  Motor Cycle 500 Mile production race at Brands Hatch during July 1966.
Instead, Hailwood completed demonstration laps on a CB450 before racing began as it was unable to compete in the 500cc category, the FIM deeming it was not classified as a production machine as it had two overhead camshafts……
The CB450 had excellent engineering for the time, notably including reliable electrical components, an electric starter, and a horizontally split crankcase.
All features distinct from the British twins of the era.
The most radical feature was the valve springing.
Instead of the conventional coil springs, it used torsion bars – rods of steel that twisted to provide the spring effect.
Initially, the British and American motorcycle companies didn’t consider the little Hondas much of a threat.
Had they looked closer, they might have realized that the influence of the new kid on the block had actually helped to boost the sales of all motorcycle makes.
At the time, the British manufacturers that lived on the sales of their 650 twins  believed Honda to be incapable of producing anything comparable…that is, until 1964, when someone spied Honda personnel testing a 450cc twin at the factory track in Suzuka, Japan.
The CB450–available only in black, hence its nickname–served notice on the world’s motorcycle industry that  Honda certainly could build larger capacity machines.  What’s more, it featured superior performance and greater technical innovation versus its European competition.
In short, this machine blew open the door through which Japanese manufacturers entered the big-bike market.
Honda designed the CB450 to put them on the big-bike map alongside the British manufacturers, and it did.
It’s truly important achievements took place in what it did not do: it didn’t leak oil, and it didn’t fail.
Later, Honda learned from a reliable source that  the British were developing a three-cylinder 750, and instantly the target became clear.
The result, of course, was the CB750 – and motorcycling hasn’t been quite the same since…….
This Honda CB450 is very tidy, mechanically as well as cosmetically and she runs well.