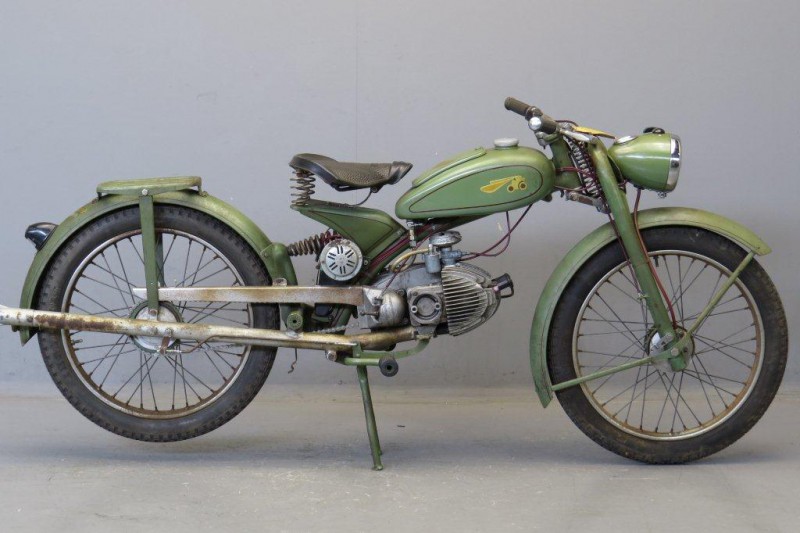 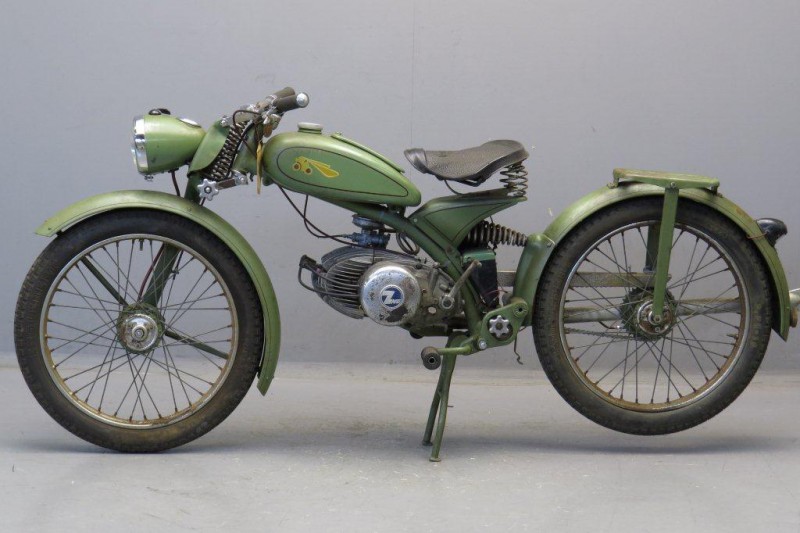 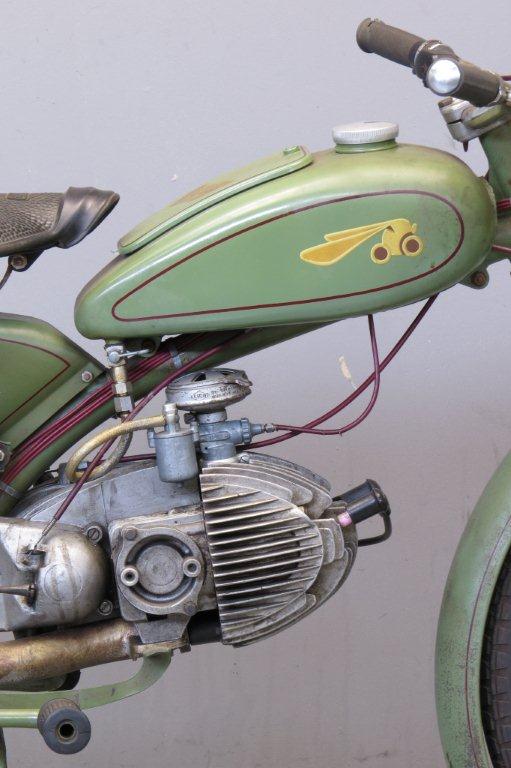 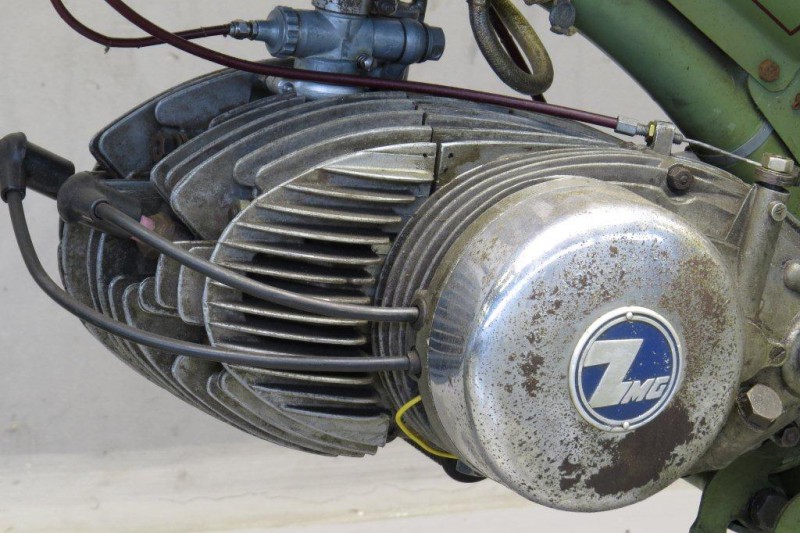 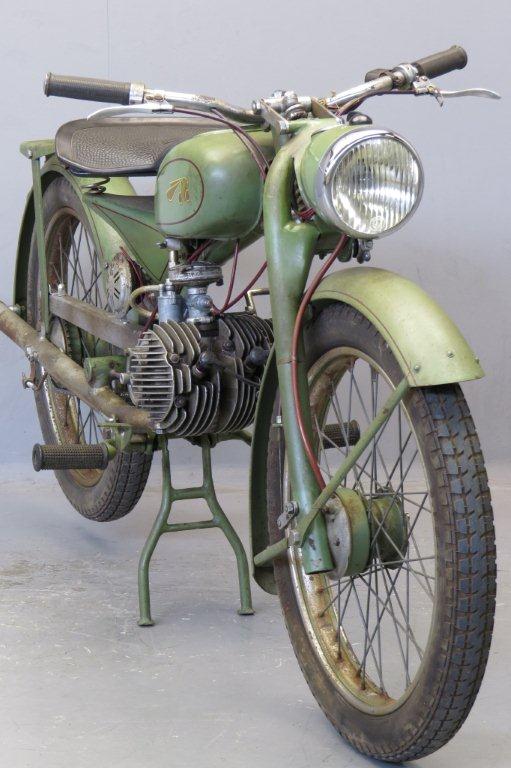 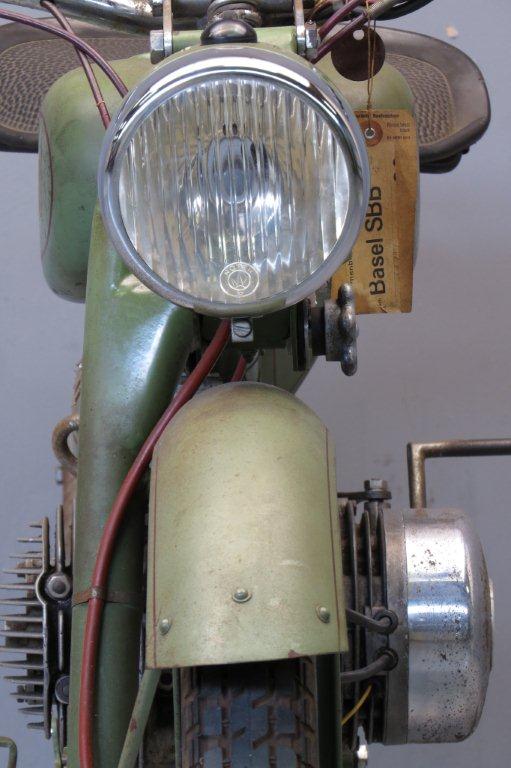 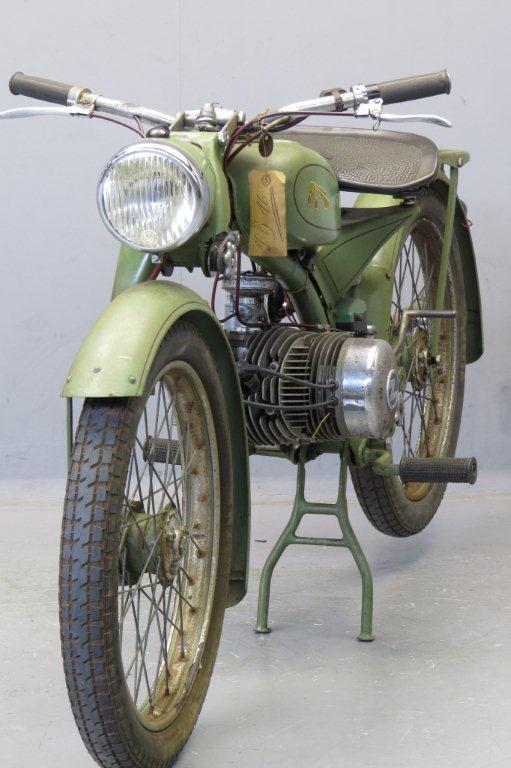 During World War 2 Norbert Riedel had designed a two stroke starter engine for the first **LUFTWAFFE jet fighters.
After the war he moved into motorcycle design, His first design was the Riedel R100.
The American army desperately wanted his jet starter engines ,so they gave him the production tools and equipment which could be used for motorcycle production.
His R100 was designed with some restraints in place, so it had to be cheap, easy to build, as Riedel only had about 75% of the raw materials he needed (all of Germanys steel works were bombed by the RAF) The frame and fork tubing is all the same diameter.
The egg- shape engine measures 99cc and 4.5BHP.
The cylinder and the head is one piece.
The transmission has no neutral gear.
Te Imme has only one front fork leg and the sprung rear leg acts also as exhaust pipe, while the engine goes up and down with the rear wheel.  The Imme has a 3-speed handlebar gear change.
The first test drives were made around X-mas 1947.
In1948 Riedel found a production factory in IMMENSTADT (Bavaria).
IMME is a German word for BEE, and the logo and name for the motorcycles was born.
Production started in 1949, but only 80 were made in the first year.
In 1950 numbers had reached 1,000 a month , although the motorcycles were selling well,  the works had some financial and warranty problems and the IMME AG went out of business.
The numbers of R100 built was around 12000.
Today  they are very rare and sought after bikes with presumingly  less than 20 known in Germany.
Unfortunately in 1951 the factory was shut down again. Riedel also designed a new egg-shaped 175cc twin engine of which only some 25 were made.
To cut cost these new 2-cylinder engines were used in the existing R100 frames and the factory offered an update to R100 owners to convert their R100`s into the more powerful R175`s.
These 175cc Twin Cylinder engines are rare and today only a handful are known.
This R175 Imme consists of a totally new old stock rolling chassis with a used Twin cylinder engine.