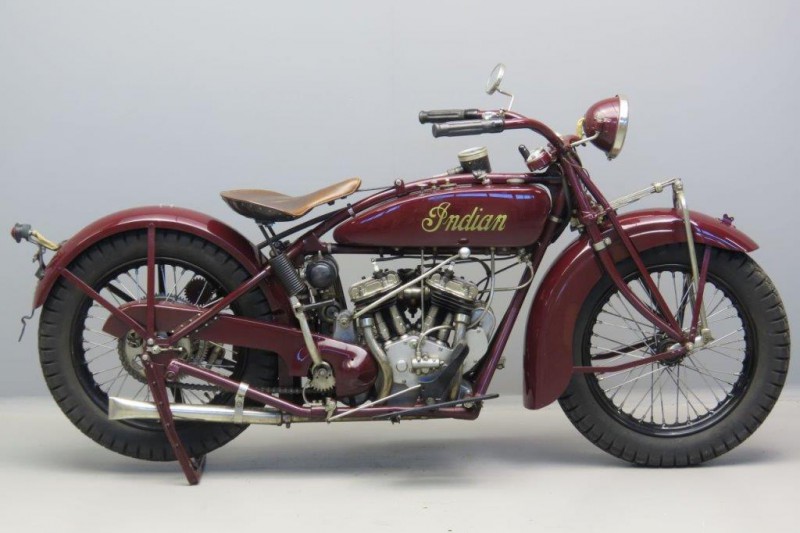 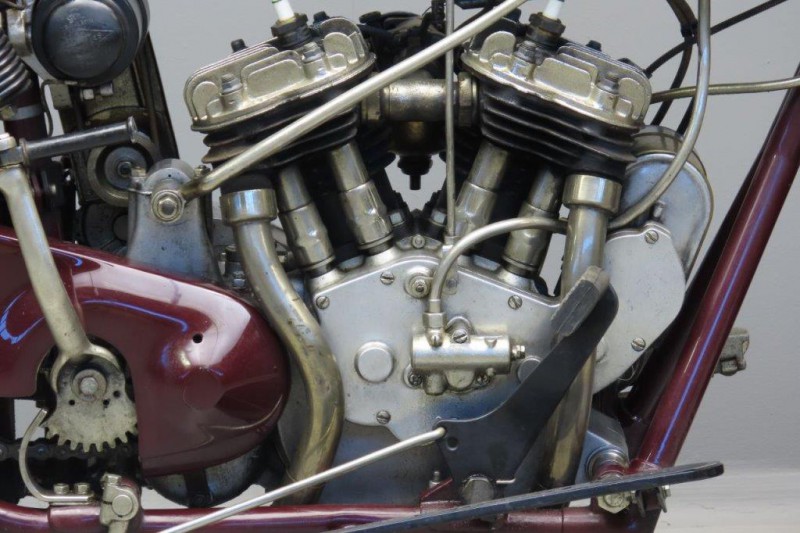 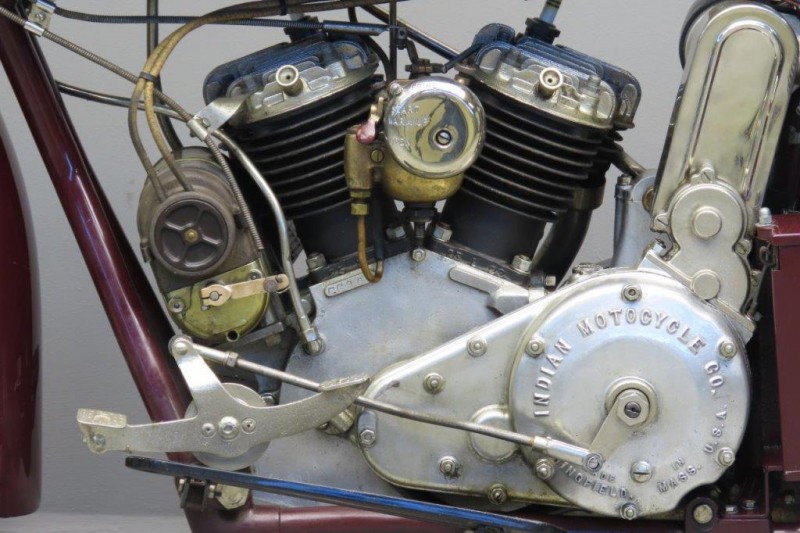 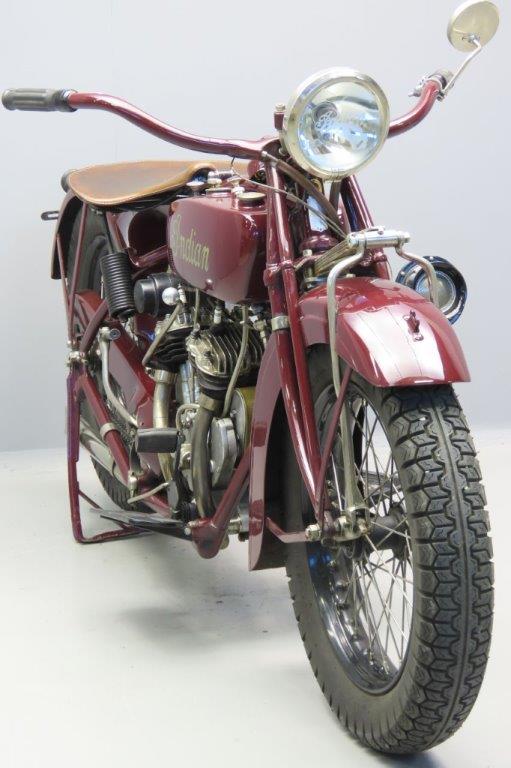 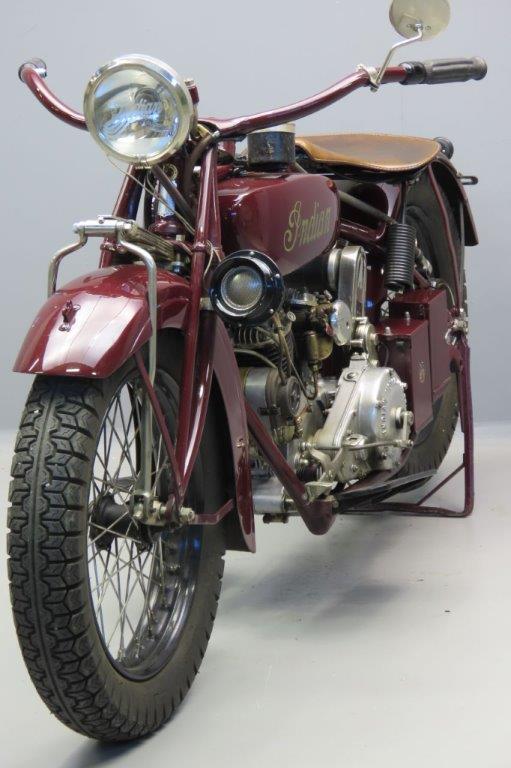 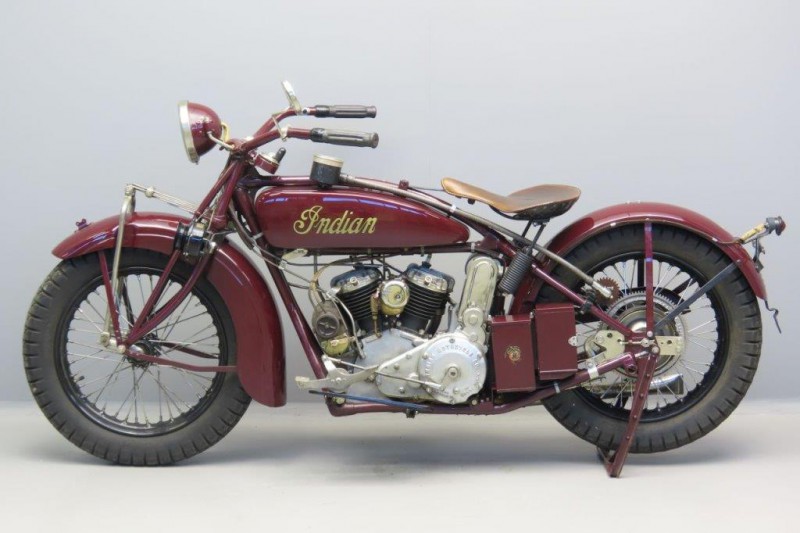 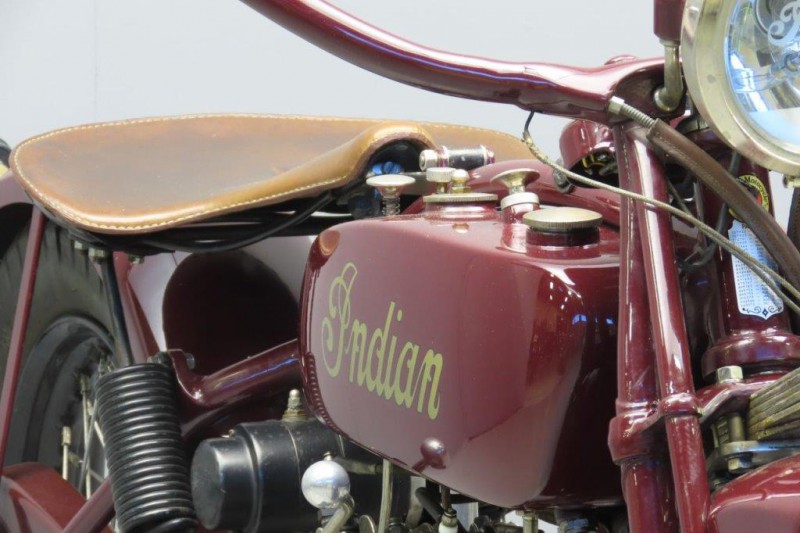 After WW I the Indian factory decided it was time to market a middleweight motorcycle.
This should be also appealing to the prospective motorcyclists who were put off by the usual heavyweight big twins that were the common types of machines with American manufacturers.
The new model was labelled “Scout” and it created a sensation when brought out in late 1919.
The strong points of the new design were low seating position, easy handling, lightness, ample power for the 1920s roads and unbeatable reliability.
The Scout features a semi-unit construction power plant with a 3 –speed transmission bolted on to it.
Primary drive is by a set of helical gears that are enclosed in a cast aluminium cover and run in an oil bath.
The clutch is foot-controlled. From late 1926 on the engine could also be had in 750 cc (45’’) capacity, which greatly enhanced the Scout’s popularity: it offered increased power and speed with only a minimal increase in weight.
Every new model year saw the necessary modifications or improvements; the 1927 catalogue boasted no less than 28 improvements and for 1928 more than 40 were announced, of which no less than 37 referred to the Scout.
Among the most notable were the new, stronger engine mounting, a new oil pump and dashboard with amp gauge and light switch and a new horn position on the frame instead of on the handlebars.
A practical point was also the fitting of an oil tap on the hand oil pump.
Not listed, but apparent on the catalogue illustrations: the 1928 crankcases, primary drive and gearbox were no longer pained red.
All Scouts previous to 1928 were fitted with angle brackets on either side of the crankcase that were bolted to lugs in the forward ends of the cradle frame.
Under heavy usage these brackets were sometimes prone to fracture.
The new Scout engine mounting was part of the crankcase and was fixed to the frame lug with a single, heavy stud.
It’s interesting to note that this early 1928 model appears to have been a bit overlooked by Indian historians: even in The Iron Redskin it’s mentioned that the 1928 Scout was the venerable 101 with lowered frame, longer wheelbase, shorter petrol tank and internal expanding front brake.
The 101 appeared in April so the early 1928 Scout model was only produced for a short period.
The machine on hand runs extremely smooth.
She has been restored and comes with Indian Corbin speedometer and Bosch electric horn.