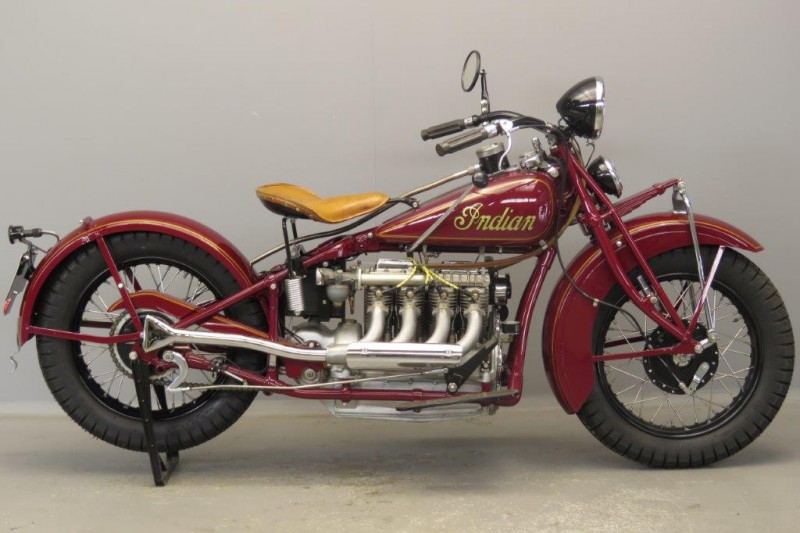 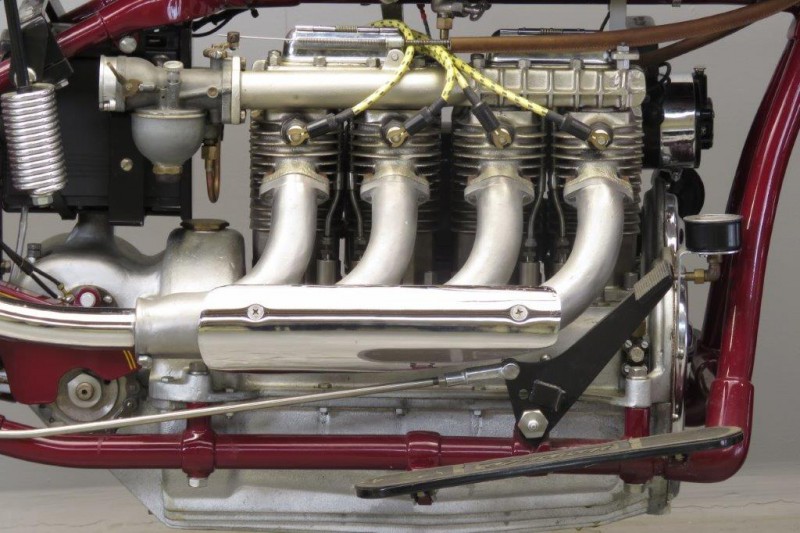 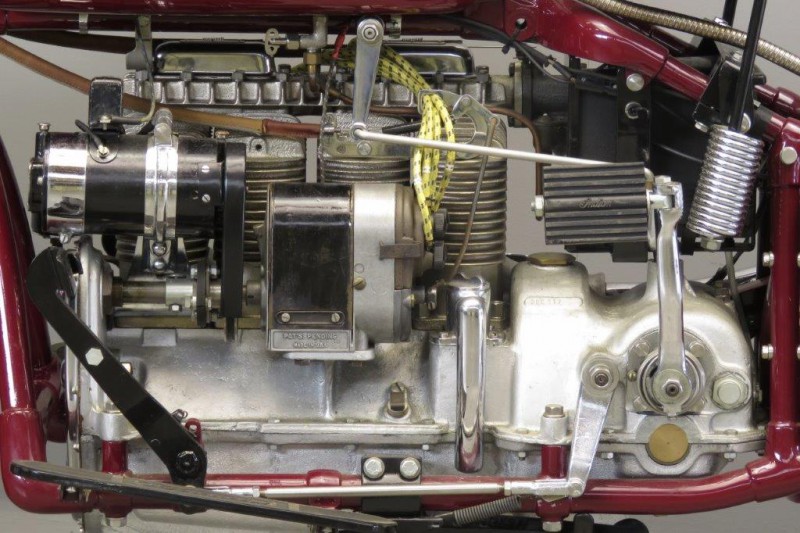 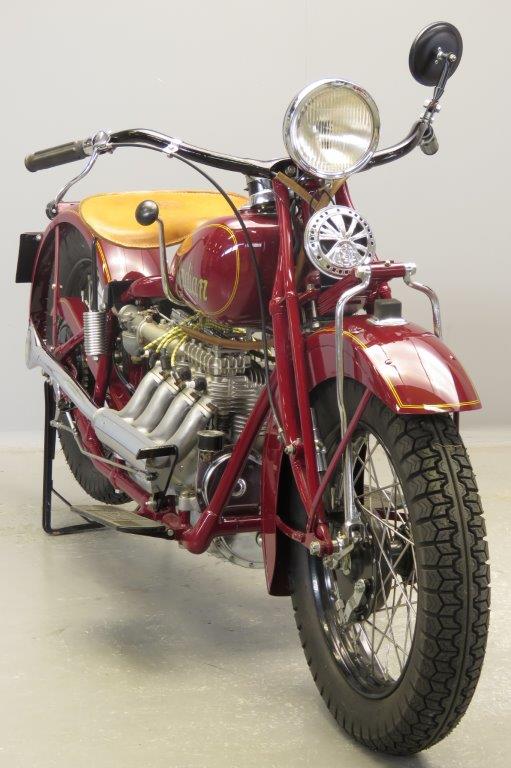 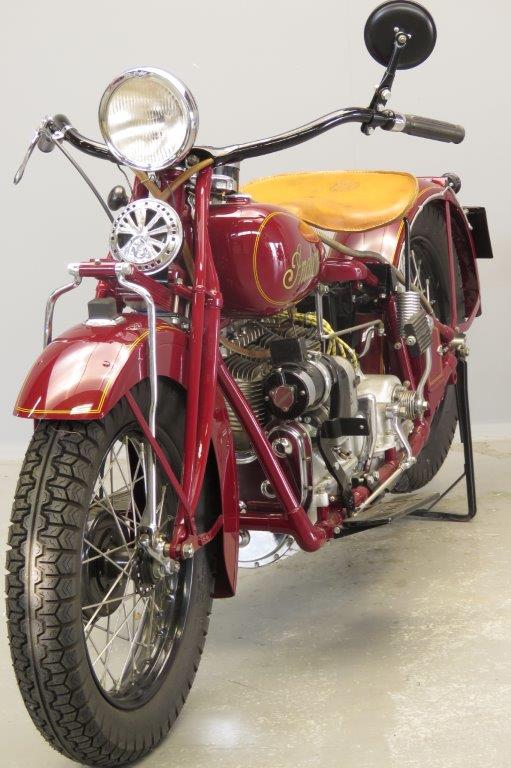 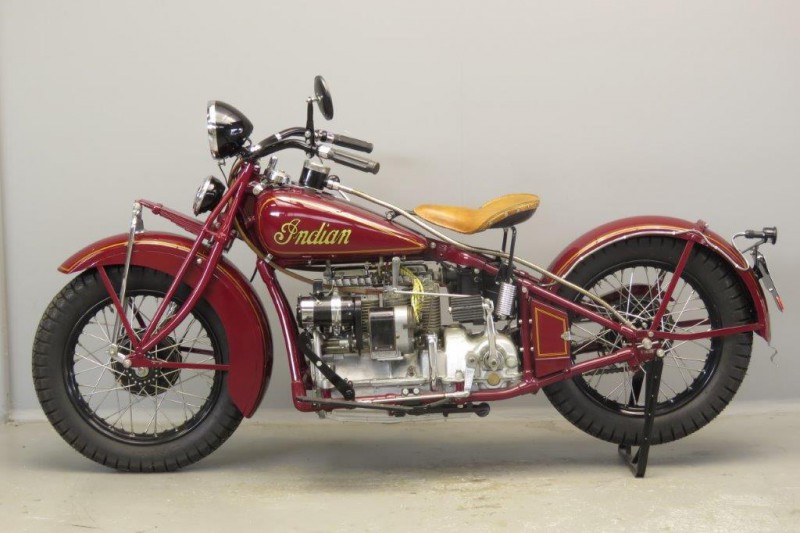 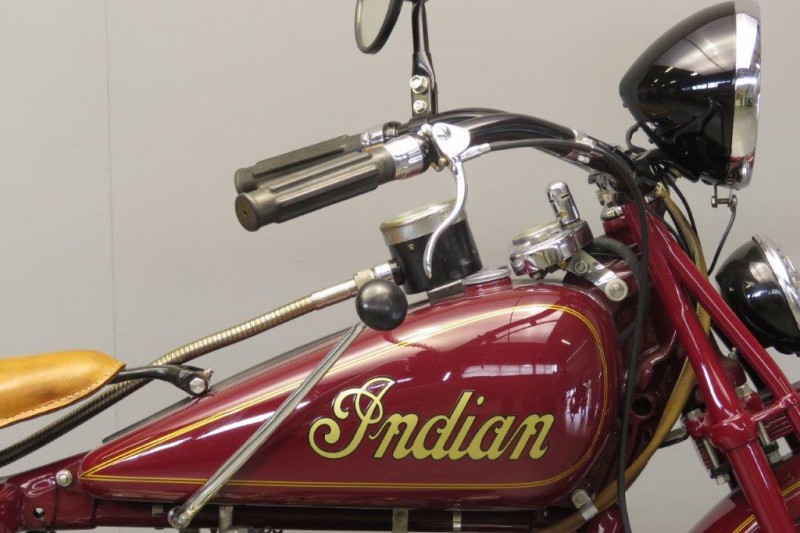 Early in 1927 Indian bought the entire assets of the famous ACE motorcycle corporation.
Indian proceeded to manufacture the Indian–ACE until 1928 when the Indian Four took its place.
The 1265 cc engine has overhead inlet valves and side exhaust valves and delivered in the late twenties form about 30 HP.
About ten years later this had grown to about 40 HP and tuned examples were known to put out some 50 HP! But with output also the weight grew: a 1929  4 would weigh about 455 lb, a 1942 model ( the last year of manufacture)  weighs 568 lb.
In the course of 1931 the effects of the Great Depression were such that the Indian management decided it was high time to  cut down production costs.
This was done by bringing the range for 1932 back to three  main models that shared most of the cycle parts and differed only in the engine layout: a 750 cc Standard Scout, 1200 cc Chief and 1265 cc Four.
This policy of economization wasn’t  carried through completely though  because the same year  two new models, the 750 cc Motoplane   and the  600  Scout Pony were introduced.
There were quite a number of changes in the Four as compared to the 1931 model.
A quote from the 1932 brochure: “The new Four has – like the new Scout 45 and the 74 – a new riding position and new comfort made possible by redesigning the whole layout of saddle, handlebars and footboards.
All controls are placed for easier operation with longer pedals same as on the Scout and 74 and of course the Four also has the handsome twin steel tanks with reserve fuel supply shut-off.
The new Four (…) has even smoother power output made possible by new design cylinders with bigger exhaust ports, a new and larger exhaust manifold, and a brand new exhaust tube with fishtail that gives ample road clearance.”

Total Indian production for 1932 was less than 3,000 machines ; the Four was the most expensive model so probably no more than a few hundred  403’s have been produced.
This outstanding  Four has been restored to concourse standard.
Download PDF
x