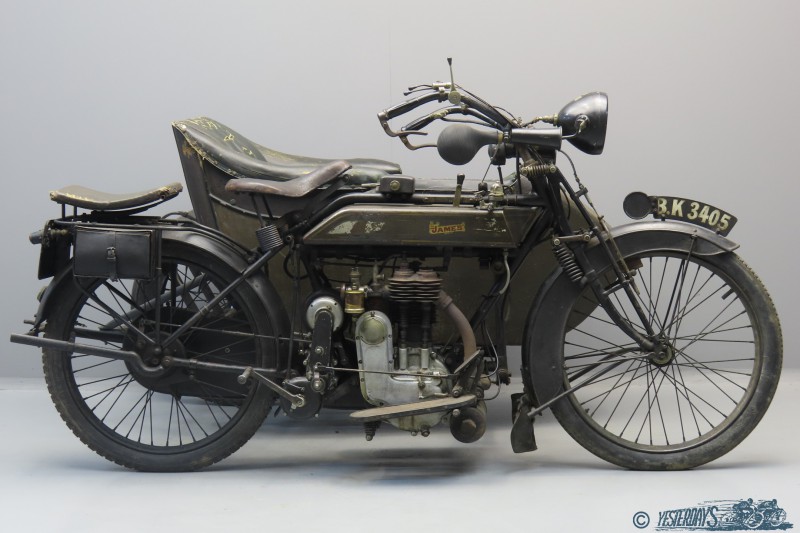 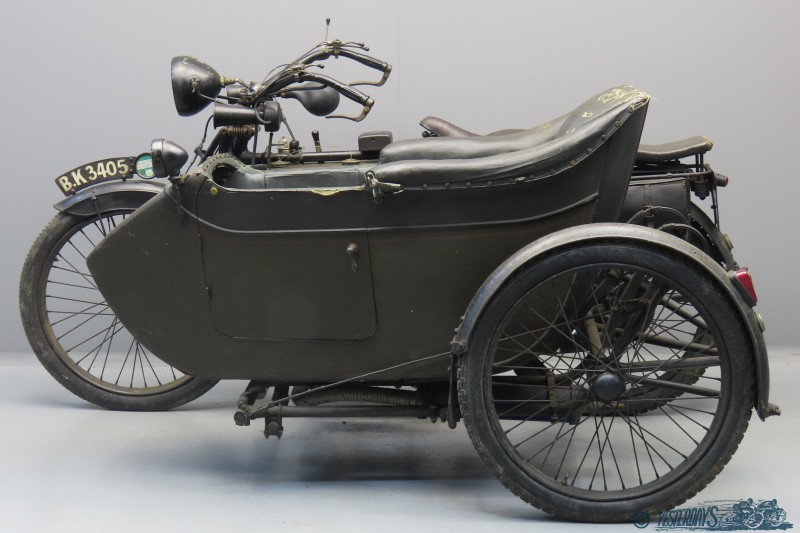 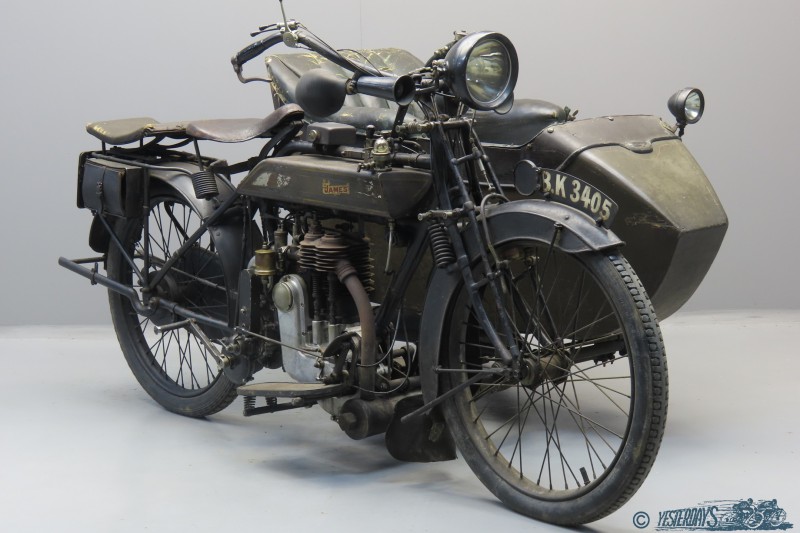 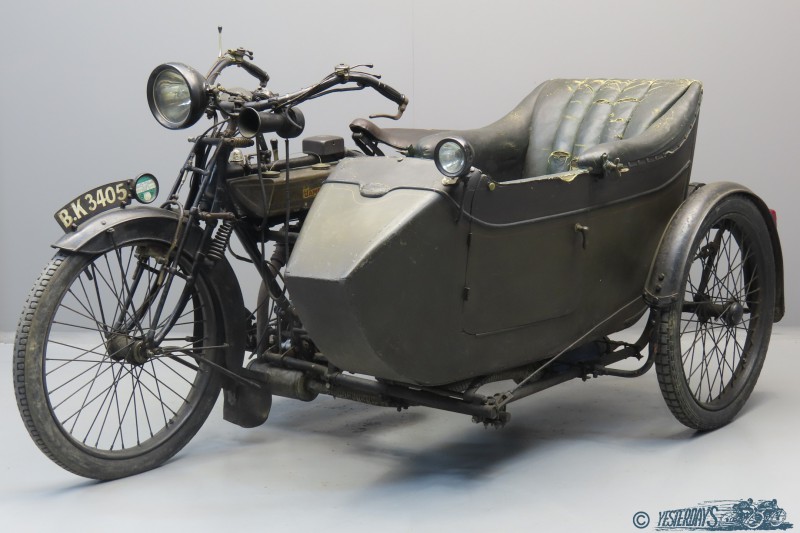 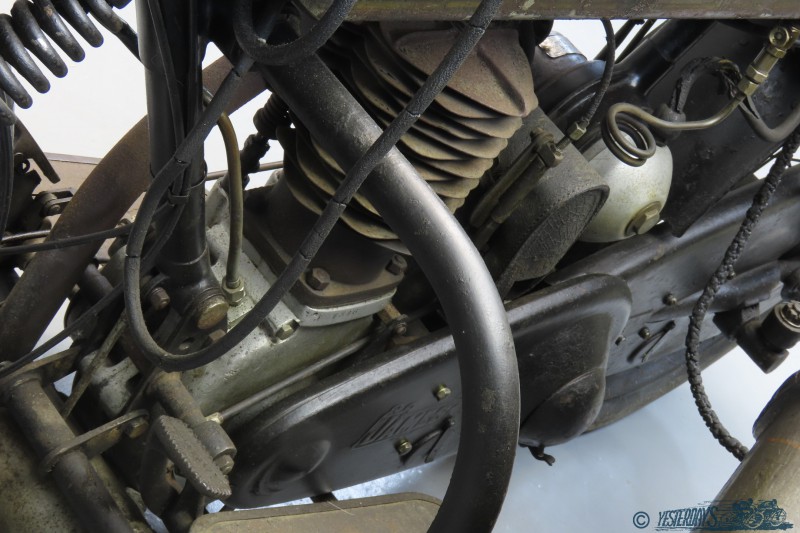 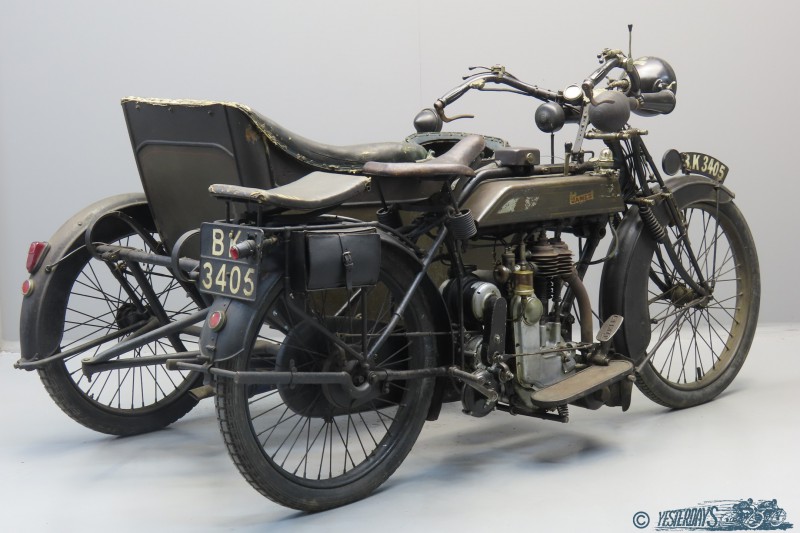 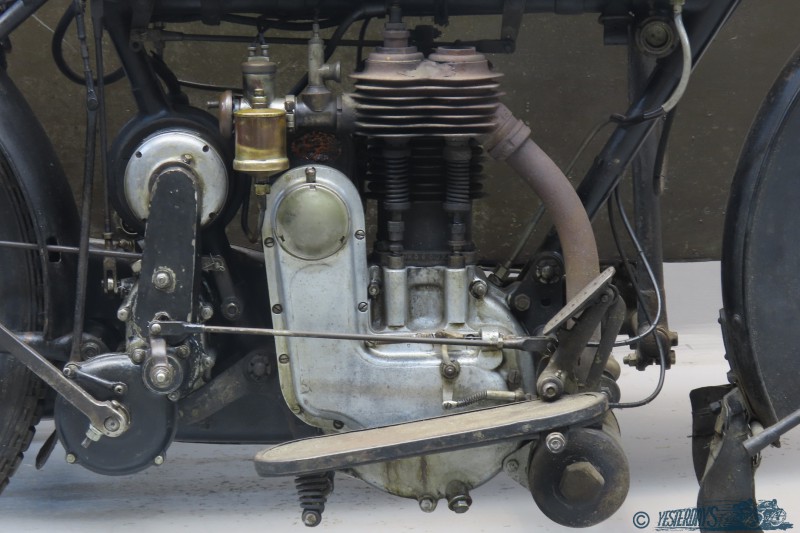 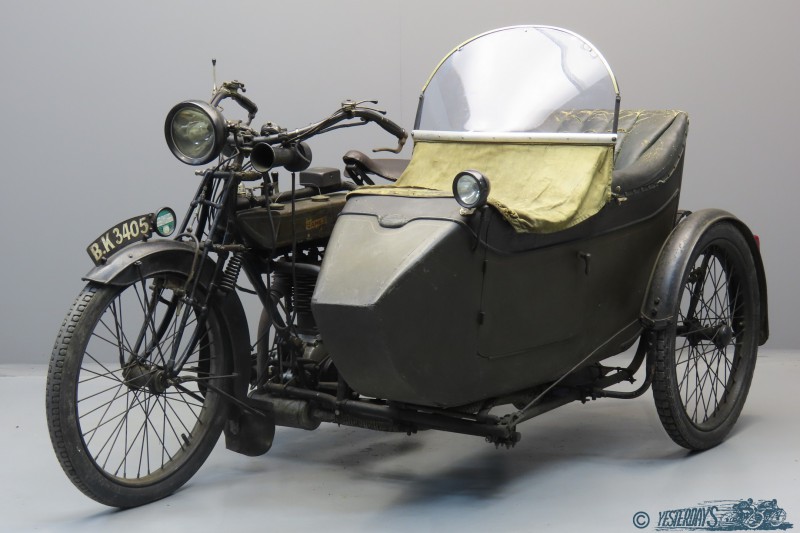 The James Cycle Company became a public company in 1897. Then Harold James, the founder of the company, quietly retired from the scene. When the first James motorcycle was marketed in 1902, Harold had already passed away. The veteran James models were merely strengthened bicycles with Derby and Minerva engines. Later on FN engines were used. The firm prospered and already in 1912 countershaft gears were offered on James machines. For 1913 six variations of the 86x96mm bore x stroke 3½ HP model were offered, varying from a single speeder belt driven option (“James No. 1”) to a three speed countershaft machine (“James No. 6”), the latter being more than 20% more expensive. A notable feature of this engine was the cylinder layout with “staggered radiators” as the company put it. This typical layout of the cooling fins would become a James trademark. In 1914 the range was widened to suit every type of customer: there was a 495cc 3½ HP twin that was especially designed for solo work, the 3½ HP single got a 103mm stroke and was upped to 598cc and 4¼ HP to satisfy the sidecar enthusiasts and last but not least a 225cc two stroke model was available for those who preferred a light and economical machine.
During the Great War James supplied machines to the English, French, Belgian and Russian armies. James continued making mostly four strokes in the twenties, but after 1930 the range focused on two strokes of less than 250cc capacity. In the early fifties the company came under control of the Associated Motor Cycles organisation and about ten years later production stopped.
The machine we present here must be one of the most authentic and original James survivors. She was first registered as BK3405 in Portsmouth, UK, and was owned by a Mr E.W. Dowling who used the combination till 1966 (see last tax disc in holder) when he had failing eyesight. The James was carefully stored in his garage and sold to an enthusiast in 1990, a few years after Mr Dowling had passed away. The “frozen in time” condition of the James made it an excellent candidate to perform in movies: she featured in “The last September” (1999) and also played a part in the 2006 film “Fly Boys” about a group of young Americans who volunteered to become fighter pilots in France in 1916. There are some photos on file related to these film appearances.
BK3405 is extremely well-equipped and must have been very expensive when new. Full electric lighting and electric claxon were rarely seen on British motorcycles before 1920, but next to that we note: Andre steering damper, Ingersoll Eclipse watch in holder on handlebars, extra bulb horn, pillion seat and electric map reading light in the sidecar. There’s a three-speed gearbox on board with foot-controlled clutch and the rear brake is of the internal expanding band type. Other noticeable feature are the well-engineered long exhaust pipe with car-type silencer under the sidecar frame and the all-encased chain transmission.