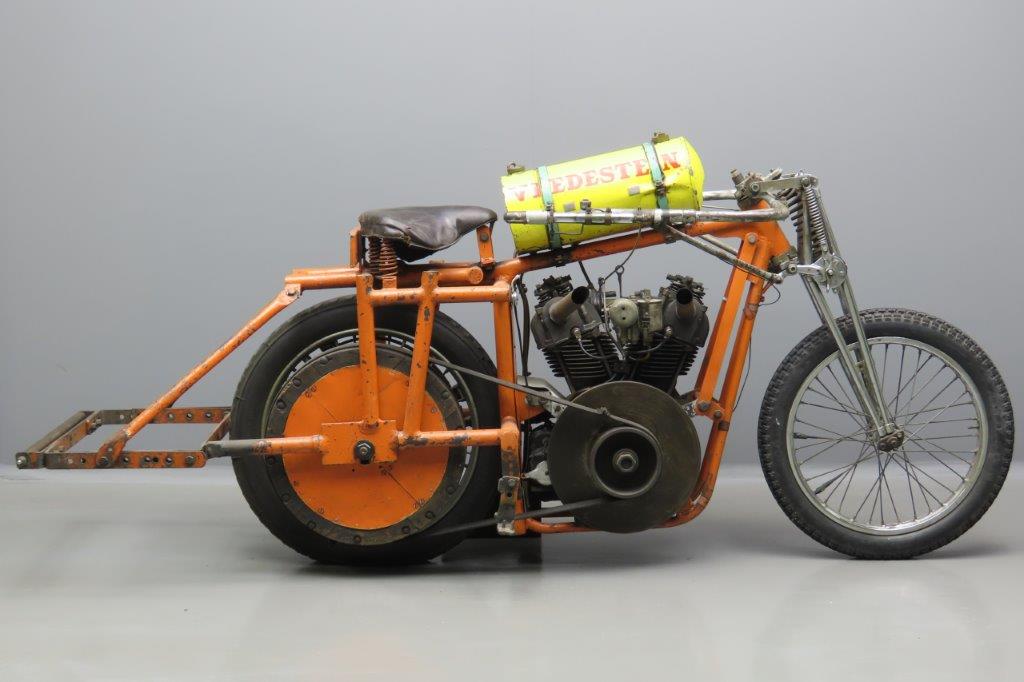 The BAC was designed in 1925 by an aircraft engineer of the Peugeot company with advice from the legendary motorcycle pacer Arthur Pasquier.
Louis Bac built about 50 machines to this design, for use at cycling tracks.
The machine has neither clutch nor gears, the transmission is  effected by a 10 cm wide belt.
The diameter of the rear wheel pulley has been fixed by regulations to 50cm, the engine pulley diameter can be chosen to suit specific circuit conditions.
Between 1932 and 1938 an improved version of the BAC was produced in France, called the Meier.
About 30 of these Meier BACs have been built; the machine on offer is one of that batch.

The main improvement in the Meier design is the application of a dry sump lubrication system, which significantly enhances the cooling and lubrication.
These antique looking giants  produce more than  30 HP @ 1500rpm  and have been used on cycle tracks till relatively recently because it was very difficult to find modern machines that could match their enormous flexibility: without clutch or gears a Meier BAC could accelerate very steadily without jerking from almost walking speed to more than a hundred kilometres per hour.

The pacer stands or sits upright to offer a maximum windbreak, and the handlebars are extended to facilitate the stance, in a standardized leather suit that allows for the same slipstream effect for any rider.
Speeds of 100 km/h (62 mph) can be reached; the average is between 60–70 km/h.
The bicycles are  sturdy and have a smaller front wheel to let the stayer bend forward into the slipstream.
From the end of the 19th century, this type of motorcycle was also used in the cycling world in record-breaking attempts for speed.  On  November 1st ,  1925, Jean Brunier, a French cyclist, set a record speed of 120.958 km/h, 75.598 mph, at the Linas-Montlhéry motor-racing track, using a motorcycle driven by Léon Vauthier.

The pacers were well-maintained and lasted  many years.
The controls consist of a throttle that can be delicately dosed and a valve lifter.
Starting was effected by getting the machine high up the track and then pushing it downwards with valves lifted.
This Meier BAC has been used  on the cycle track of the former Olympic Stadium in Amsterdam and is in authentic and  unrestored condition.
It was ridden by the legendary Dutch pacer Noppie Koch (1932-2010).
Koch was a successful, professional bicycle racer in the 1950s and  focussed mainly on motor-paced racing from 1955 on.
He  was the Dutch champion in this category in 1959, 1962 and 1963.
After his active career as a professional cyclist, Koch paced many cyclists to world titles.

With this machine come some interesting personal artefacts of Noppie:   photos of him on the Meier-BAC, his two-piece leather suit with zipper at the back of the jacket  and his helmet, with ear-protectors that are open at the back to facilitate communication with the stayer behind him.
The machine is a good runner, see and hear it run at https://youtu.be/yed6ySVxSZs