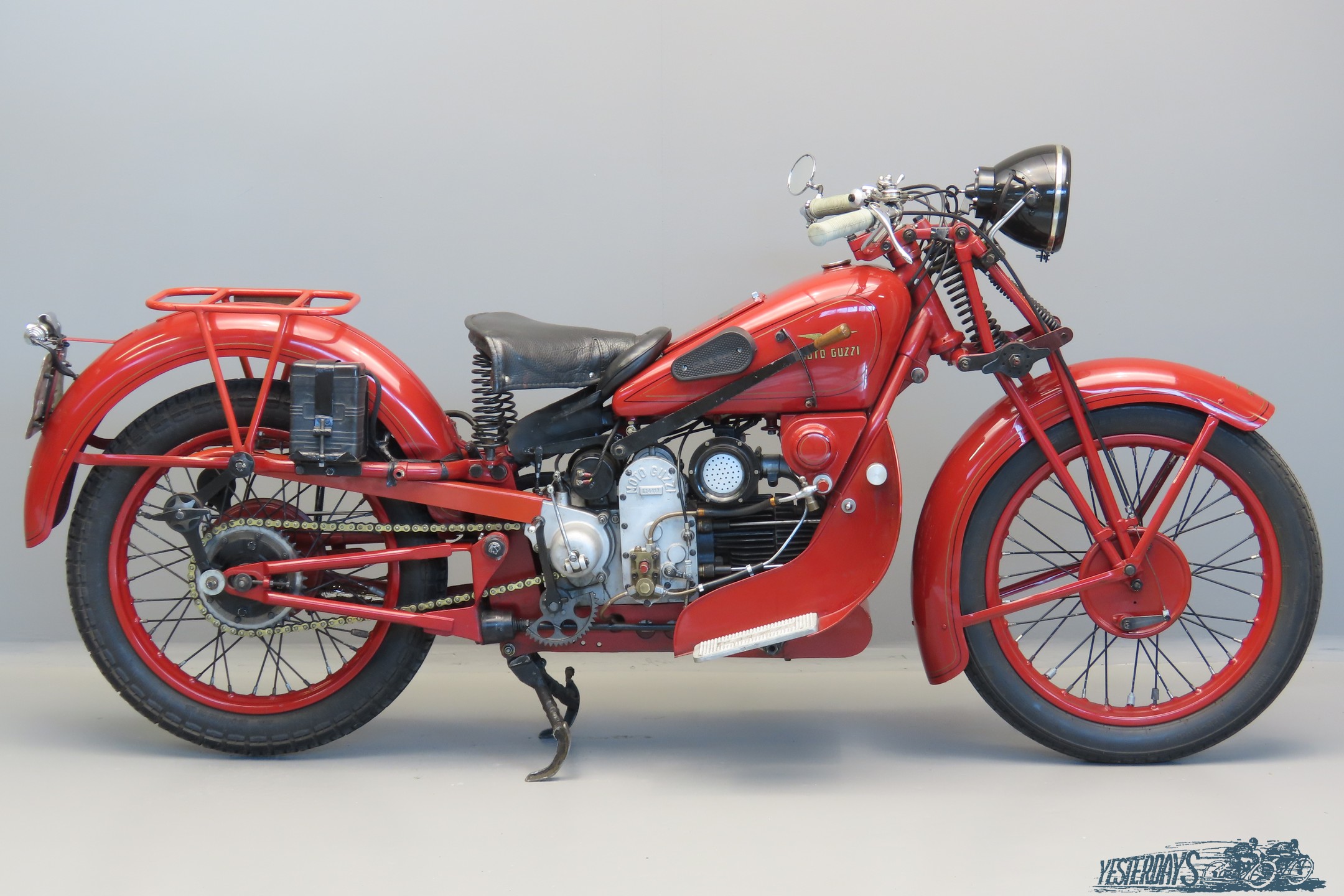 In 1927 Giuseppe Guzzi, elder brother of Carlo and the engineering genius of the family, designed a prototype of a touring version of the Sport model, the Grand Tourer (G.T.).
This machine was equipped with a very comfortable and well designed sprung frame, a swing arm with friction dampers.
The new model was dubbed “Norge” after the Italian airship that had carried out the first verified flight over the North Pole in 1926.
Giuseppe made a 6000 km long trip to the North Cape with the new G.T. 500 in the summer of 1928.
This feat created much publicity for the firm. However, despite its modest price, its stability and comfort the GT sales struggled for a few years because the public was rather sceptical about this new construction.
A few years later competition successes with its successor, the G.T. 16, would convince the prospective buyers of the merits of the sprung frame.
The 1923 Moto Guzzi C 2V was the company’s first racer with twin overhead valves.
When in 1924 the four valve model C 4V took over the role of production racer the C 2V became available to the general public.
In 1930 it was renamed the 2 VT (“Valvole in Testa” or “valves in head”).
The machine we offer here is a very rare bird indeed, as witnessed by the letter the former owner received from the Moto Guzzi company archives in 1990:
“Herewith we confirm and congratulate your rare find of the Moto Guzzi racing motorcycle.
According to our records we can find that the engine with number L 14417 was constructed at our experimental and racing department in 1931, the precise date is unknown, being a 2 VT.
The frame with number 1179 was constructed as a normal production unit of a GT 16 in 1931.
This frame was transferred to the experimental and racing department on the 12th of March 1931.
Through research we learn that this frame and this engine were constructed and assembled especially for long distance racing events.
The fully sprung frame with number 1179 was together enlightened and strengthened by our experimental and racing department.
Also, to make it suitable for long distance racing events it was, next to many minor modifications, fitted with smaller handlebars, a new design of leg shields and an enlarged petrol tank.
It was prepared for the “Marcia delle 12 Ore” at Gorizia which was ridden on the 16th of April that year with riders U. Prini and T.
Bandini. Please note that the racing motorcycle with engine number L 14417 and frame number 1179 won that actual race.
The 17th of April 1932 the racing motorcycle with engine number L 14417 and frame number 1179 was ridden in the “Marcia Bengasi-Cirene” race at Bengasi, Libia, with riders Agati and Pappalardo.
Also this race was won on that motorcycle. For the 1932 “Marcia Bengasi-Cirene” race the bike was not altered.
In 1933 T.
Bandini received this bike as a special gift. It was registered for road use that year, using the same frame number.
The restriction was made that T. Bandini was not to enter it in racing events.
The production version, with which it shares many equal features, was named the GT 2 VT.”
It appears only three machines with these specifications were constructed by Moto Guzzi.
This excellently restored specimen is fitted with Bosch lighting system with authentic Miller tubular rear light.
The electrical system has been updated to 12V with LED lighting, electronic ignition and lithium battery.
With the machine come the original refurbished magneto, a cylinder for double ignition plus head, valves and springs, clutch parts, new piston, gears and sundry parts.
She is in impeccable mechanical condition and has shown this a number of times in various long distance runs such as Milano-Taranto (more than 1000 km) and the Moto Giro Italy (some 1500 km).