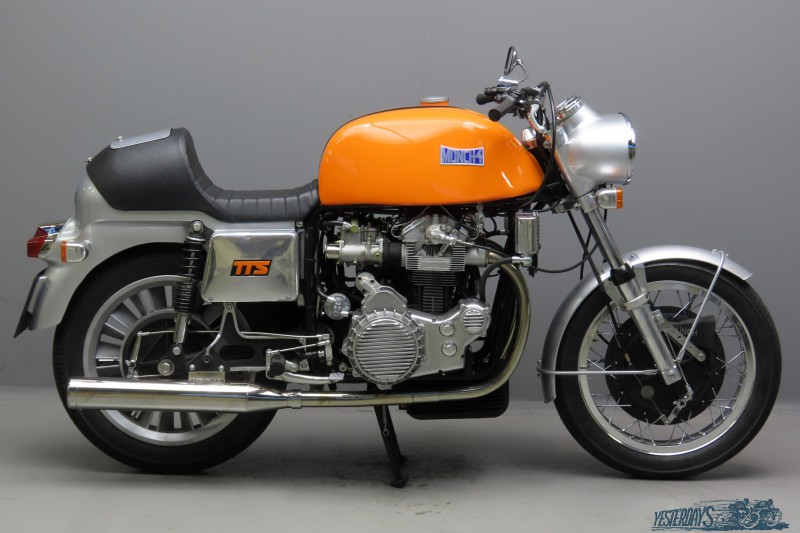 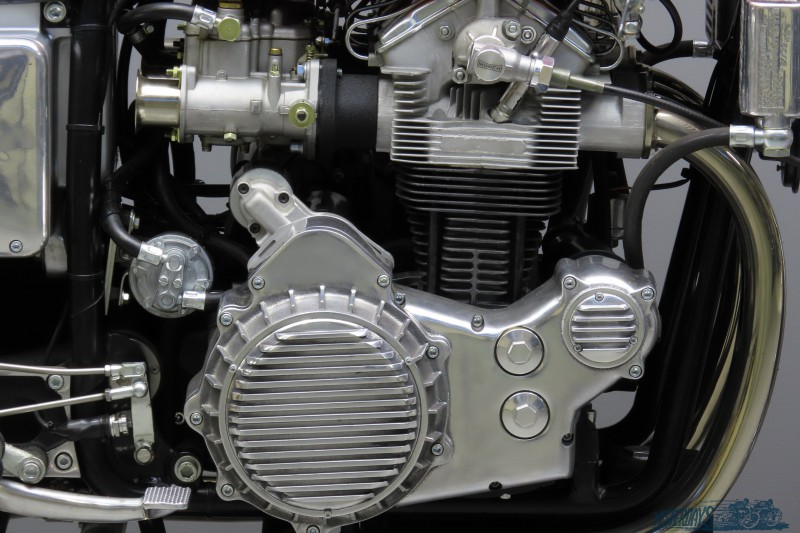 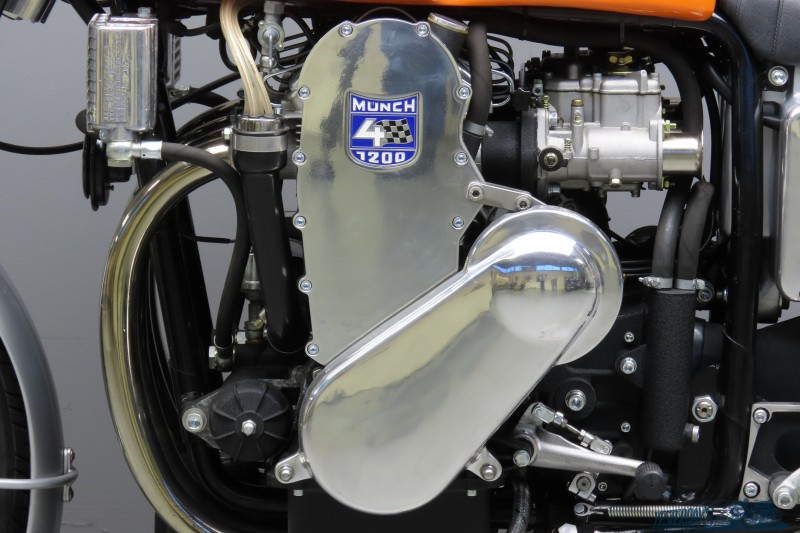 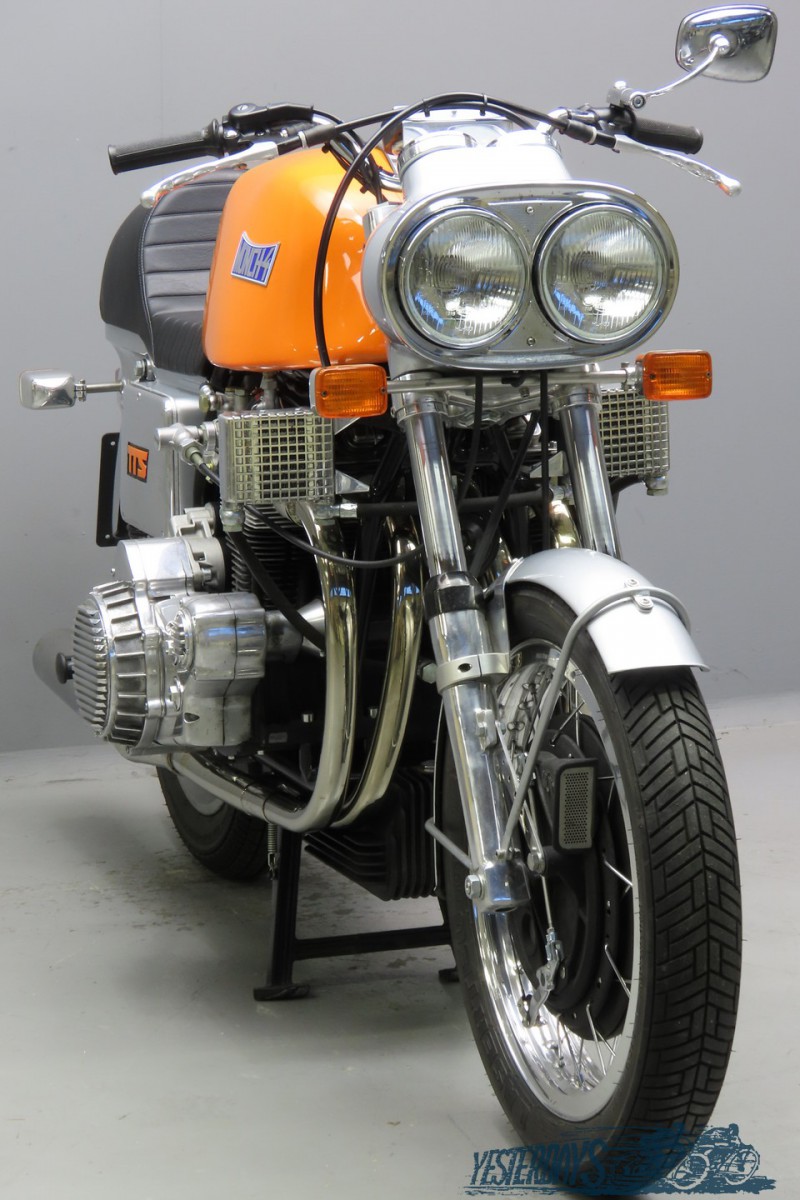 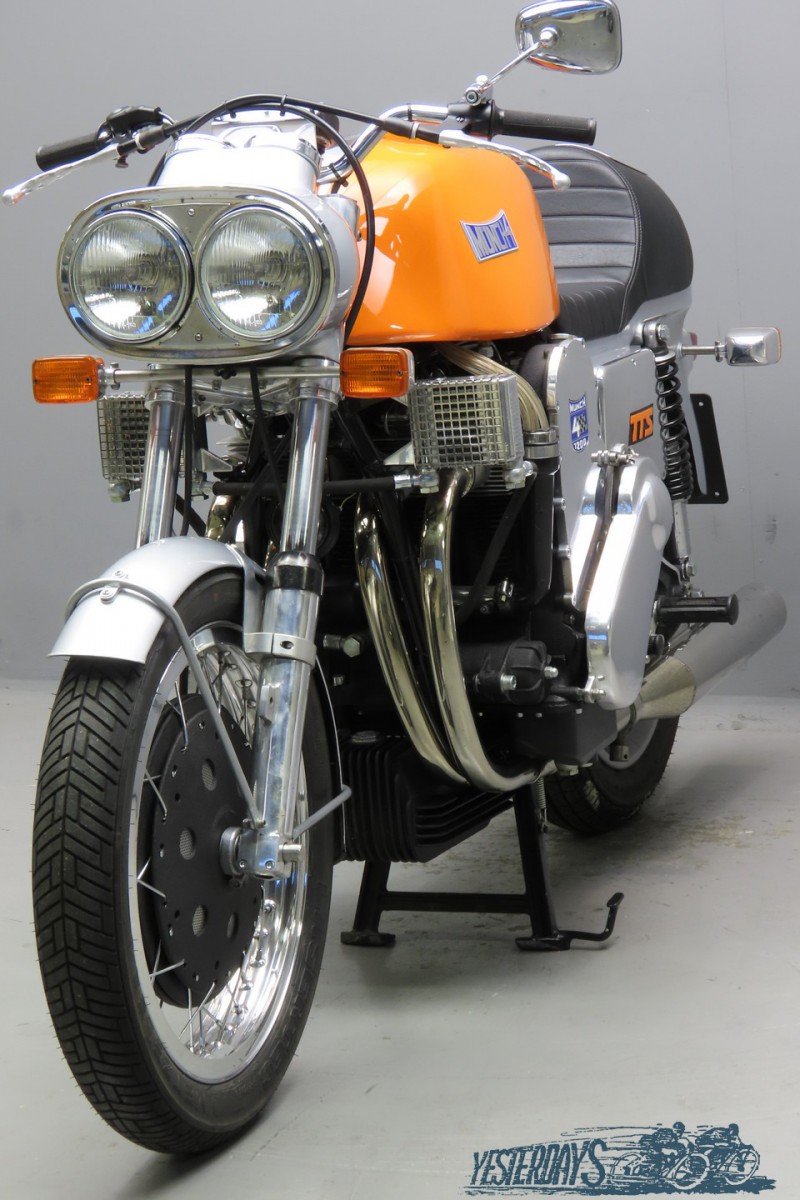 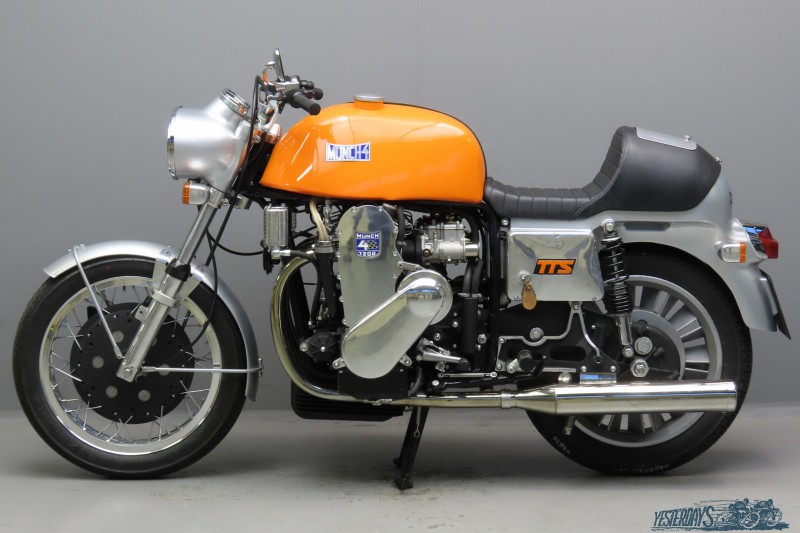 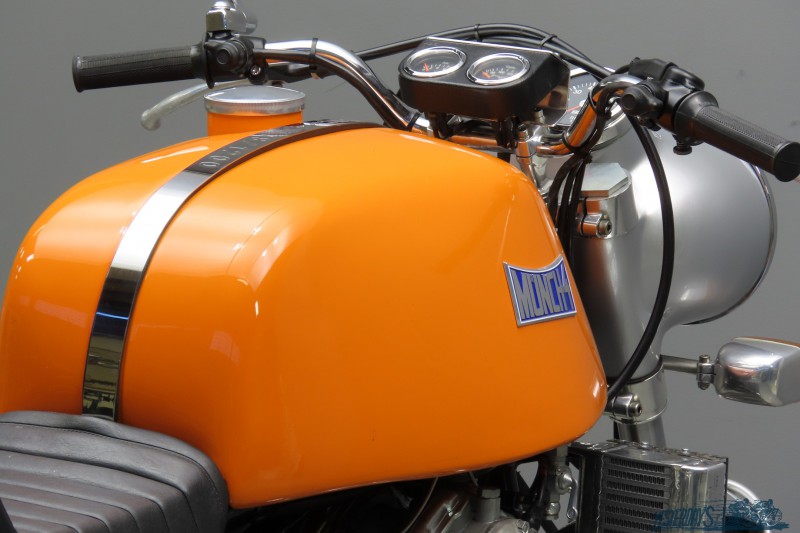 Friedel Münch began his career in the late 1940s as an independent tuner and inveterate modifier of motorcycles.
His first notable work was on a Horex in 1948, which had such good performance the factory offered him a job in their competition department.
He had no desire to work for someone else, and refused their offer, but later relented due to financial difficulties, a consistent theme in his business life.
After Horex went bankrupt in 1960, Münch bought their tooling, and made spares and built Horex specials (such as the tasty cafe racer above). In the quest for more speed, he created a ‘relatively’ light racing motorcycle using the NSU ohc four cylinder engine, weighing in at around 220km total, and giving good performance.
The frame was based on a Norton Featherbed, as were all his subsequent chassis.
The first proper ‘Mammut’ (Mammoth) was built in 1966, with 996cc and 55hp, which gave good performance for the day at 185 km or so.
It used a very large (250mm) magnesium front drum brake which Munch had originally developed for racing Nortons.
The new machine was a sensation for its speed and impressive scale, and although Munch pursued the idea of series production in effect every machine was a special order, no two alike.

The Münch “Mammoth” was first shown to the motoring public at the international two-wheel show in Cologne in the fall of 1966 and was ( with distance ) the most expensive bike on the show. The rear chain case acts as the left side of the swingarm and permits the chain to be completely enclosed and to run in an oil bath.
It also incorporated a chain tensioner, which allows drive chain slack to be adjusted within seconds, without touching the axle and disturbing the alignment.
The rear wheel is an alloy casting, with an integrated duplex drum brake, fitted after initial tests had shown that no spoke wheel would take the brute power of the engine.
|A bolt-on casting incorporated the rear mudguard and provided the seat mounting as well as the housing for all electrical components.
By 1968, the capacity was increased to 1177cc with 88hp with the ‘1200 TTS’ model, the state of tune reflecting the NSU car of the same name.
Münch created the cast magnesium rear wheel with flat spokes which became a trademark of all later Mammuts, as even with robust 5mm spokes for his original wire wheels, the threads tended to strip on the spoke nipples. As well, the seat/mudguard unit, headlamp bucket, and chainguard were cast in magnesium, for lighter weight.
Petrol tank and side panels were hand-hammered aluminum, and the single headlamp Sports models were joined by dual-headlamp Touring machines.
Despite all the magnesium, the bike weighed in at a mammoth 295kg not far out of line with 70s/80s sports machines from Japan actually, but in 1970 sports bikes were still typically under 230kg.
The machines now accelerated like a Formula 1 car; 100 mph could be reached in less than 11 seconds.
They were completely vibration free, and there was no motorcycle which could keep up with them—the solid NSU engine did not get tired, and the chassis is able to handle the power.
The only drawback was the rear tire; if the rider used the machine’s potential, it was gone after 1000 miles…..
Münch, always struggling financially and casting about for backers, eventually sold his own name in association with his motorcycles to businessman Heinz Henke, who intended to series produce ‘Münch’ bikes (only a few were built, perhaps only 4).
Friedel maintained ‘Mammut’, and shortly began producing models under this name in limited numbers for collectors.
Every machine from the first was bespoke around a similar core, although the state of tune, shape of tanks, seat, mudguards, handlebars, headlamps, color, etc, were all optional.
Each machine was hand-built by Friedel Münch and his employees, and his legend grew for his unique and mighty machines.
Less than 500 were ultimately built. (source: adapted from https://thevintagent.com/2017/12/04/road-test-munch-mammut/)
Dutchman and Mammut enthousiast Erik Meesters has written the fascinating book “Mit Herz & Seele, die Geschichte von Friedel Münch und Helmut Fath” which gives detailed information on Münch’ career and the bikes he designed and built.
This impressive machine was recreated around an  NSU engine and superbly breathes the atmosphere of a Münch-created specimen.
It is both mechanically and cosmetically in tip-top condition and runs like a dream.