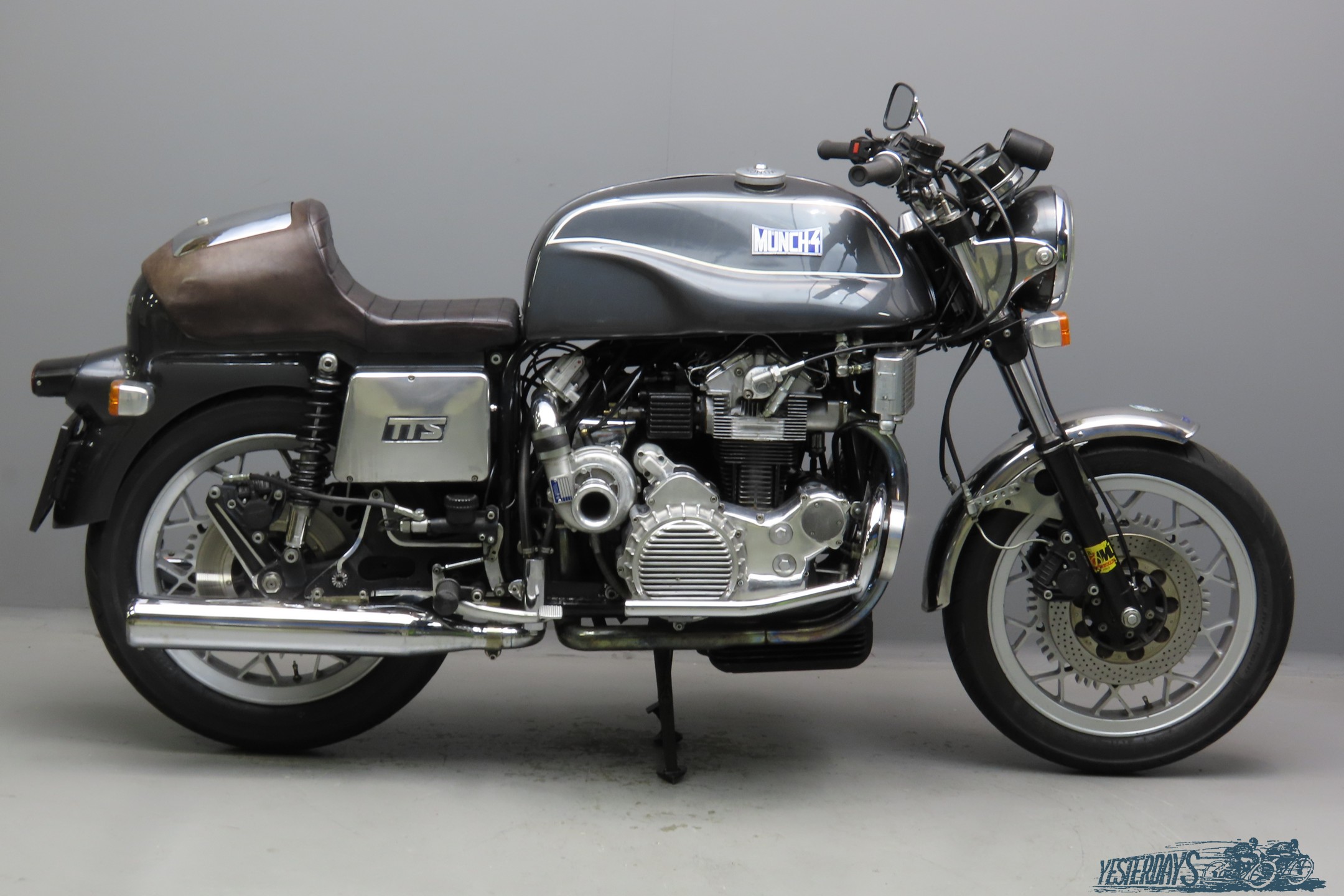 Friedel Münch began his career in the late 1940s as an independent tuner and inveterate modifier of motorcycles.
His first notable work was on a Horex in 1948, which had such good performance the factory offered him a job in their competition department.
He had no desire to work for someone else, and refused their offer, but later relented due to financial difficulties, a consistent theme in his business life.
After Horex went bankrupt in 1960, Münch bought their tooling, and made spares and built Horex specials (such as the tasty cafe racer above).
In the quest for more speed, he created a ‘relatively’ light racing motorcycle using the NSU ohc four cylinder engine, weighing in at around 220km total, and giving good performance.
The frame was based on a Norton Featherbed, as were all his subsequent chassis.
The first proper ‘Mammut’ (Mammoth) was built in 1966, with 996cc and 55hp, which gave good performance for the day at 185 km or so.
It used a very large (250mm) magnesium front drum brake which Munch had originally developed for racing Nortons.
The new machine was a sensation for its speed and impressive scale.
Everywhere your eyes fall on a Münch, you see components designed without regard to cost.
Friedel Münch was an indefatigable one-man design team, not hemmed in by norms in his pursuit of weight savings, power or speed.
Münch’ metal of choice for his castings was electron, a magnesium-alloy lighter than aluminium, though harder to work with.
Besides various covers and cases, he used electron for the one-piece seat base/rear mudguard, the double-leading-shoe front brake of his own design and the vaned rear wheel, also his own design and the first cast motorcycle rim to make production.
As production continued into the Seventies, in effect every machine was a special order, no two alike.
Münch, always struggling financially and casting about for backers, eventually sold his own name in association with his motorcycles to businessman Heinz Henke, who intended to series produce ‘Münch’ bikes (only a few were built, perhaps only 4). Friedel maintained ‘Mammut’, and shortly began producing models under this name in limited numbers for collectors.
Every machine from the first was bespoke around a similar core, although the state of tune, shape of tanks, seat, mudguards, handlebars, headlamps, colour, etc, were all optional.
Each machine was hand-built by Friedel Münch and his employees, and his legend grew for his unique and mighty machines.
Less than 500 were ultimately built.
For Münch Mammut road test see The Vintagent’s blog: https://thevintagent.com/2017/12/04/road-test-munch-mammut/
Dutchman and Mammut enthousiast Erik Meesters has written the fascinating book “Mit Herz & Seele, die Geschichte von Friedel Münch und Helmut Fath” which gives detailed information on Münch’ career and the bikes he designed and built.
On page 309 of this book the specimen we offer is pictured, with the remark that this machine, with frame # 436, took three years to complete and was the last Turbo that was built.
Incidentally, only seven of these Turbo machines saw the light of day… The odometer on this pristine mighty mammoth shows only 11,500 km.