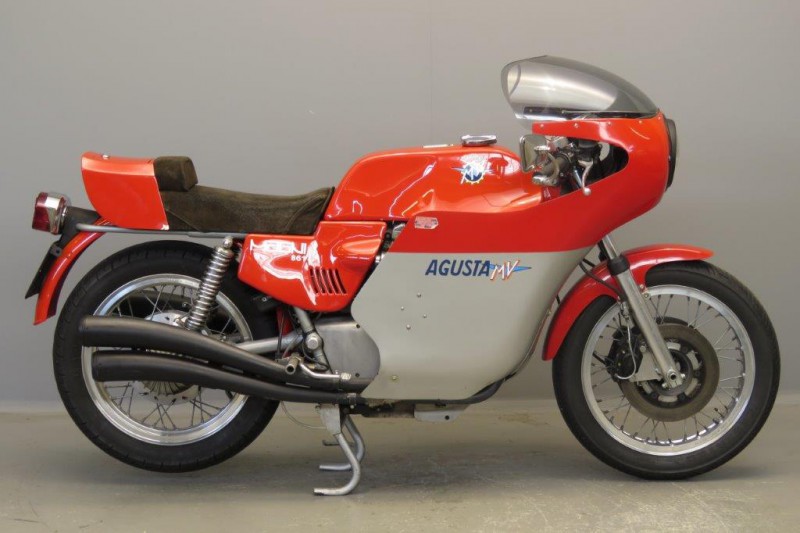 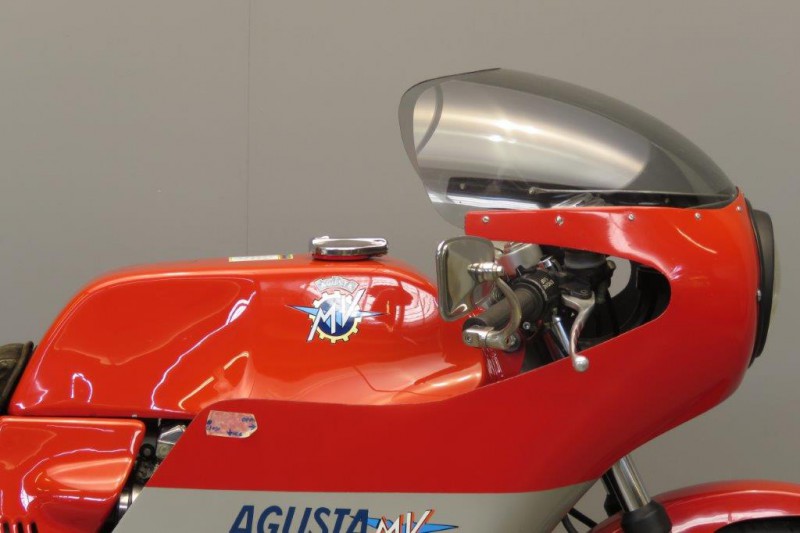 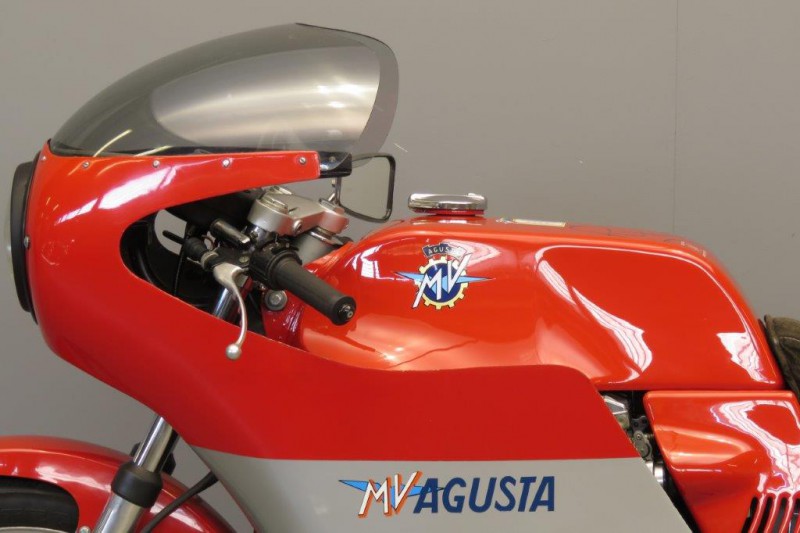 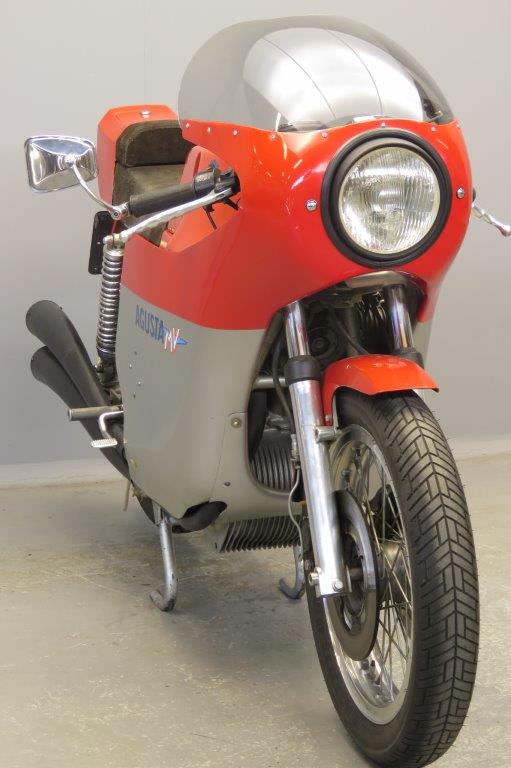 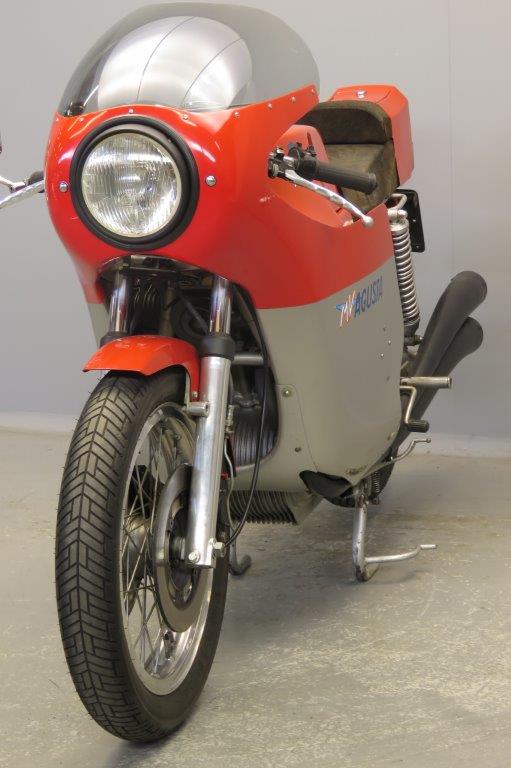 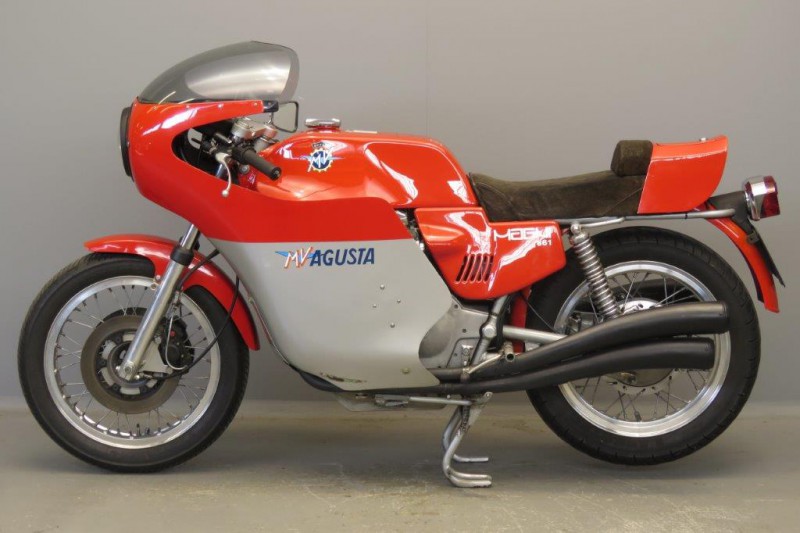 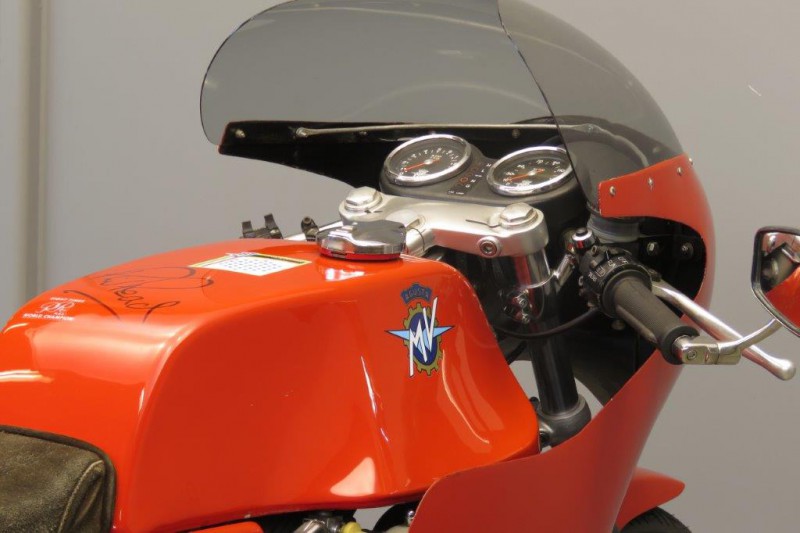 Legendary watchmaker George Daniels  http://www.danielslondon.com/  wasn’t only stimulated by miniscule mechanicals –he also had a passion for cars and bikes.
We are now able to offer his 1976 MV Agusta 750S America.
Daniels’ penchant for classy motorcyles has been discussed before, but this 1976 MV Agusta 750S America is probably our favorite of his bikes to come to market so far.
George was apparently pretty keen on it too, as he kept the bike for 26 years at his home in the Isle of Man.
The 750S America model was introduced in 1975.
It featured blockier styling and a larger engine than previous MV 750s.
MV Agusta’s glorious racing background gave rise to numerous street bikes over the years, such as the 1976 MV Agusta 750S America motorcycle.
The MV Agusta 750S America motorcycle had its roots in a 500-cc racing powerplant.
Weighing 507 pounds without fluids, the 750S is no lightweight, but its handling at speed belies the mass.
The suede-covered racing saddle keeps the pilot in place during the kind of spirited cornering maneuvers the 750S is so well known for.
Like previous MVs, the 750S America was expensive and exclusive and everyone knows Italian style and performance have never been cheap.
And that goes double for motorcycles built by that most exclusive of Italy’s bike-makers, MV Agusta.
However you get something for money.
Lots of power.
Lots of styling.
Lots of attention when you roll up to a stoplight or cafe on a bike that makes everything else seem so ordinary.
This is a special Magni model.
Arturo Magni was an integral figure in the history of MV Agusta.
A long time race director of the marque, he could not bring himself to abandon it when the manufacturer closed its competition department at the end of 1975.
With his son Giovanni, he started marketing special parts, rims and engine and chain drive kits, as well as modified bikes, often on the basis of the America 750 motorcycles.
As they corresponded to individual orders, Magni MVs are all different.
Very accomplished, built by craftsmen with great care, they are extremely popular today because they bring the MV a sportier character.

With the 1976 MV Agusta 750 Sport America, you got all that and more—an intoxicating taste of la dolce vita.
It just couldn’t get much sweeter.
After all, MV Agusta’s name was synonymous with grand-prix racing.
From 1952 through 1973, MV Agusta won 37 world road-racing championships, including 16 500cc titles in 18 years.
This was a company that made helicopters for profit and gorgeous red racing bikes for fun.
So when MV turned out street bikes—and it never made many—you could count on that grand-prix experience going into each one.
The engine is a 790cc inline four with dual overhead cams.
There are twin disc brakes in front and a tachometer that redlined at 8,500 rpm.
The differences start with the engine’s sand-cast cases that telegraph its limited production run.
Inside is a power plant derived from MV’s racers.
And in case you didn’t get the message, there’s a decal with 37 blue stars, one for every campione del mondo.
Fire up the MV, and there’s no mistaking the bike’s lineage.
The styling is pure Italian and just as breathtaking as the motorcycles styling and performance, though, was the price.
At a time when Honda’s CB750 went for $2,190, the MV cost three times as much—$6,500 retail.
But, as with so many things in life, if you want it, it is worth it.

On top of the horological provenance, this MV has also been signed ‘in the paint’ by eight-time World Champion Phil Read, and is claimed to have covered just 6,220 miles from new.
The odometer now reads 6,229 miles.
What’s more, considering Daniels’ mechanical proficiency, we’d imagine it was rather well  maintained during his ownership.