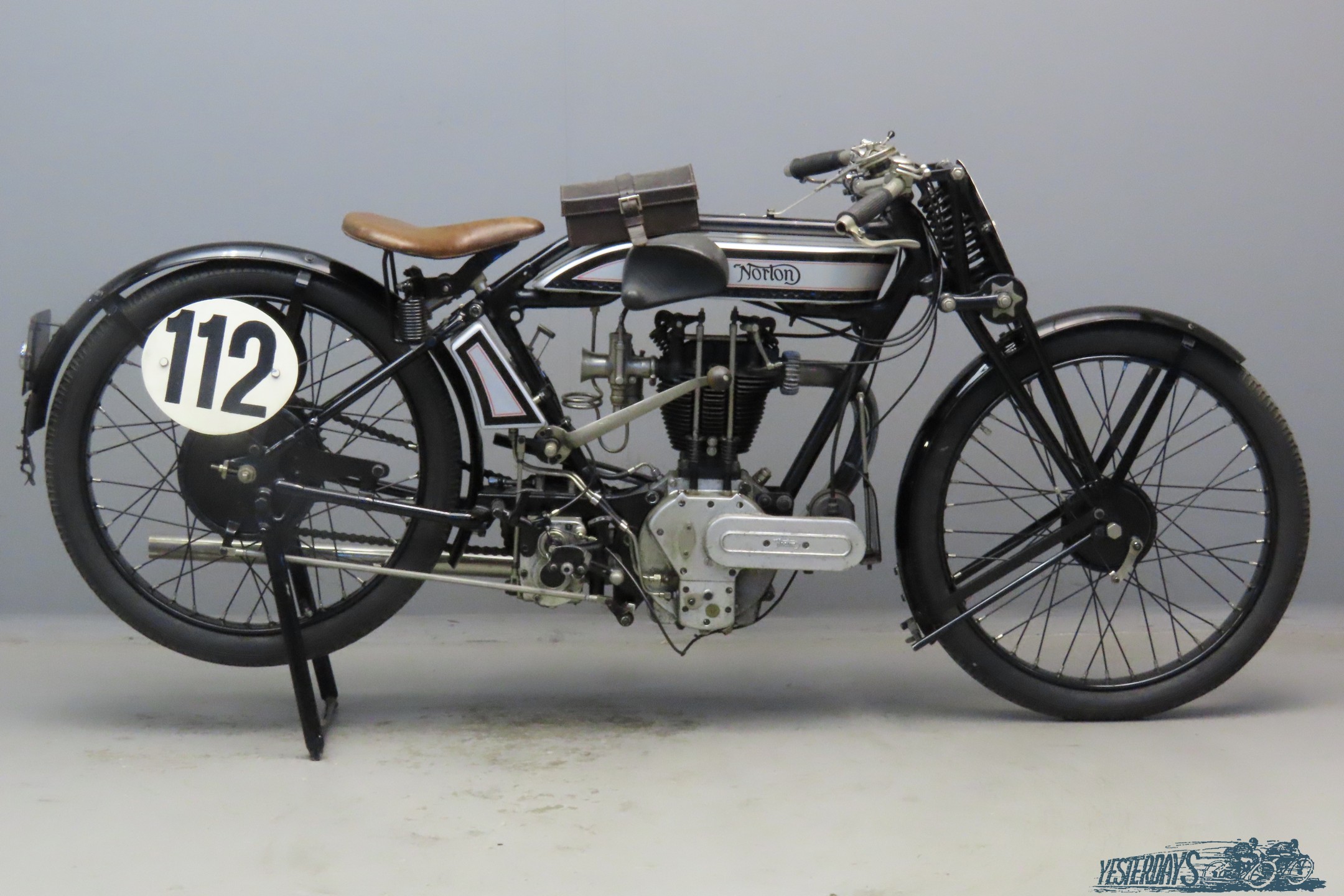 Like the majority of their contemporaries, Norton relies on the side valve engine until the 1920s, when the existing and well-tried 490cc unit is used as the basis for the firm’s first overhead-valve design. Penned by James Lansdowne Norton himself and first seen in prototype form in 1922, the overhead-valve Norton makes little impact in that year’s Senior TT, though at Brooklands D R O’Donovan raises the world 500cc kilometer record to over 89 mph using the new engine. For 1923 the OHV model is catalogued as the Model 18. At its introduction it gets the factory code word of “Speedy”, which certainly shows some foresight: speeds up to 100 mph are attainable with carefully tuned engines. In the course of 1923 a number of speed events are won, but in 1924 the Model 18 really shows what it is capable of. In June Alec Bennett wins the senior TT on a model 18 with an average speed of 61.64 mph; the sidecar TT is won by George Tucker on a 588 cc version of the model. Both the French and Belgian GPs are won by Bennett, which makes him the first man ever to win three major races in a year. Bert Denley captured the coveted British One Hour Record at 87.07 mph. In 1925 a redesigned drum brake and Webb centre spring forks are new features. In the Senior race Bennett opens up with a record lap and forges well ahead of the opposition, consisting of the very fast AJS models and Howard Davies on his JAP-engined HRD. By the end of the second lap a patch of oil on the road at Governor’s Bridge causes a tumble. This damages a footrest in such a way that it sticks into the ground on right-hand turns. Davies wins the race with Frank Longman (AJS) coming in second and Alec Bennett taking third place.
Copies of Norton factory records show that engine # 25300 (in frame # 17486) is built for the 1925 TT and intended for ‘A Bennett’. A special feature of this engine is that it has dry-sump lubrication, not used on standard Nortons at the time. Somewhat unusually, Bennett’s 1925 TT machine is registered ‘TR 361’ in Southampton where he has his motorcycle dealership, rather than in Birmingham, home of the Norton factory.

In the early fifties the machine lives on the mainland and is -modified in quite a number of respects- used for races and sprint events. ‘TR 361’ endures many hard seasons of racing, suffering the inevitable crashes and mechanical failures, so it’s understandable that not much of the original Bennett machine survives. In 1966 it returns to the Isle of Man for display in Murrays Motorcycle Museum but comes back to the mainland in the 1980s, when it is rebuild and restored. In the course of the machine’s history the original frame is replaced by a 1926 Model 18 frame.

After its restoration the M18 is featured in a 5-page illustrated article in The Classic Motorcycle of July 1991, of which we have a copy available. Since the early 90s the machine has mostly been on display in private collections and she’s in good running condition. Interesting features are the foot-operated auxiliary oil pump and the hand-plus-foot operation of the clutch.