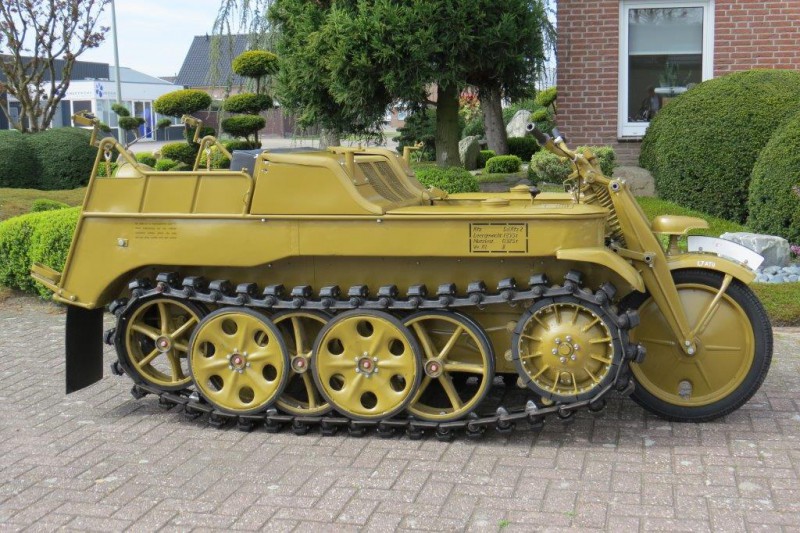 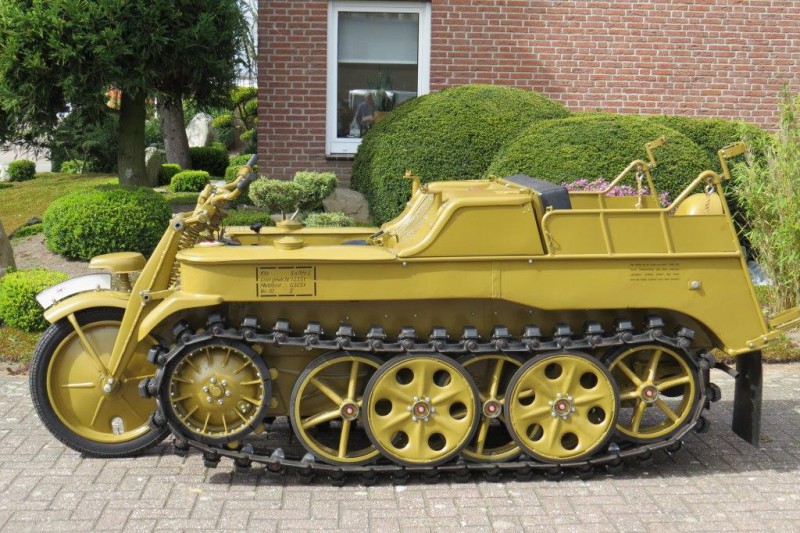 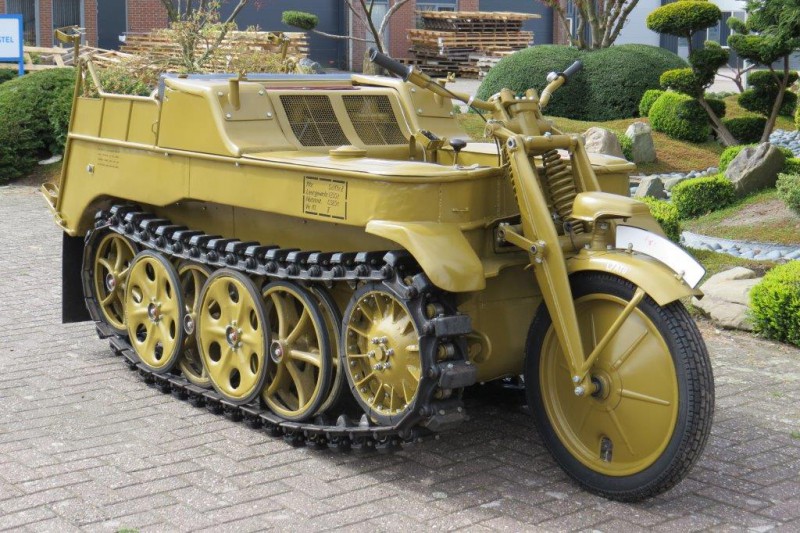 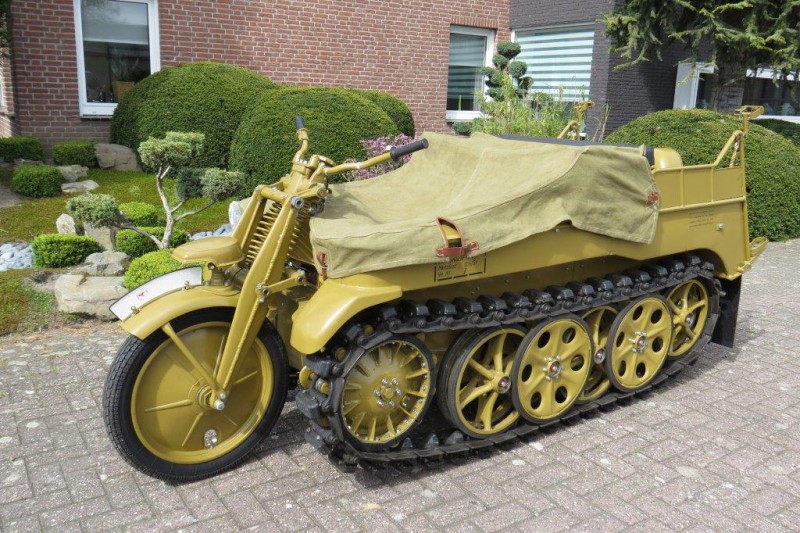 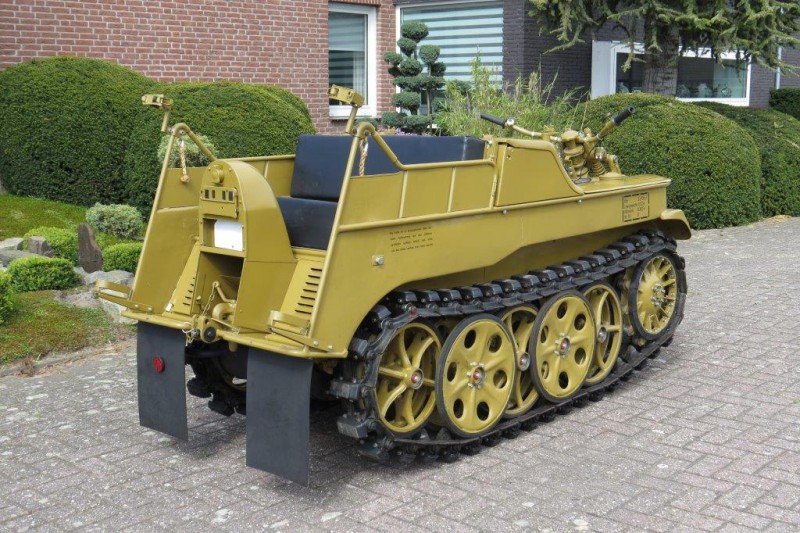 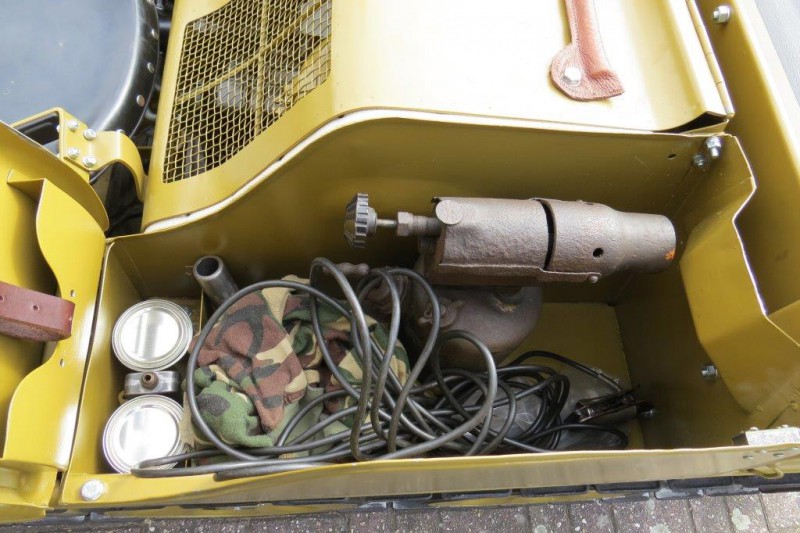 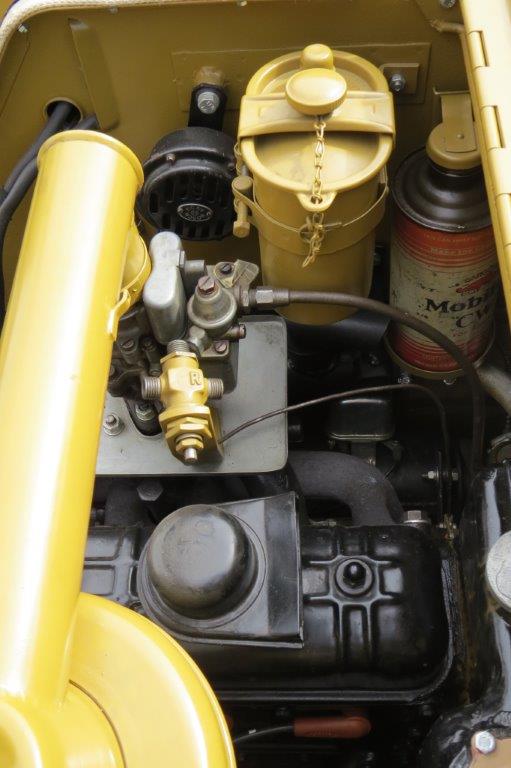 The Kettenkrad was designed as a small tractor to tow a trailer or a small gun .
It carries a crew of three soldiers.
The driver and two passengers.
The Kettenkrad is not armed and not armoured. Some versions have three riffle holders to carry the rifles of the crew.
The Kettenkrad is typical of vehicles designed and manufactured for the German Wehrmacht during WWII-innovative, well made, and generally superior to equipment used by their enemies.
The Kettenkrad is an ingenious half motorcycle, half tracked vehicle, hence its name-"ketten" meaning tracks, "krad" meaning Krafttrad, or motorcycle.
Steering is accomplished by turning the handlebars.
If little movement is used then the wheel alone will steer the vehicle; however, if the bars are turned further, the track brakes will be engaged (just like a tank) to turn more sharply.
The handlebars has a twist-grip throttle, just like a motorcycle, but the transmission is car-type, incorporating a 3-speed gearbox and foot-operated clutch.
There are high and low transmission ranges-"Gelande" (off-road) and "Strasse" (street)-for a total of six speeds.
The engine is the super-reliable 1,478-cc inline water-cooled unit from the Opel Olympia car, also in use with the Wehrmacht.
The tracked system is very advanced, using roller bearings and padded tracks.
This gives rise to an extraordinary top speed of 50 mph on road surfaces, although the instruction manual advises a maximum of 44 mph. In any event, it still is the fastest tracked vehicle of WWII. Kettenkrads were used in almost every theater of the war and proved very reliable in all conditions, from the arctic Russian winter to the heath of the Western desert.
They were used to tow anti-tank guns as part of feared tank-busting teams, to tow ammunition trailers to the front line, to lay cables and ferry troops to difficult locations.
Their excellent cross-country ability made them the last vehicles to bog down in the clinging Russian mud.
Later in the war they were even used to tow Messerschmitt Me 262 jets up to the runways in an effort to save valuable aviation fuel.
In all, over 6300 NSU Kettenkrads were produced, compared to over 600,000 Jeeps. However, as German army equipment was virtually wiped out at the end of the war, few have survived.
The 4-cylinder engine comes from the well known OPEL OLYMPIA car which has a capacity of 1478cc and developes 36 HP.
NSU was a motorcycle factory and produced only one cylinder engines with up to 600 ccm, which were not powerful enough for the Kettenkrad. To save the work and the time for the developing of an own engine, NSU took the reliable OPEL 4-cylinder engine from the stock.
The OPEL OLYMPIA car was in Wehrmacht use, too, so the mechanics in the field knew the engine.
The gearbox has 3 forward gears and 1 reverse gear, plus a transfer box for "Gelände" (Off-road) und "Straße" (Road). So in total there are 6 forward and 2 reverse gears.
The total lenght is 3 metres, 9’ 10” .width is 1 metre 3’ 3”  Unladen weight is 1235 kg, 2736 LBS
This NSU Kettenkrad has been carefully restored to former glory over the period of some years with no expenses spared.
It has been used regularly for short runs on private roads and she performs just like it would have done in the war, coping with all types of terrain. This Kettenkrad comes complete with rifle holders, first-aid kit, pré-heather,  emergency light and fabric apron.