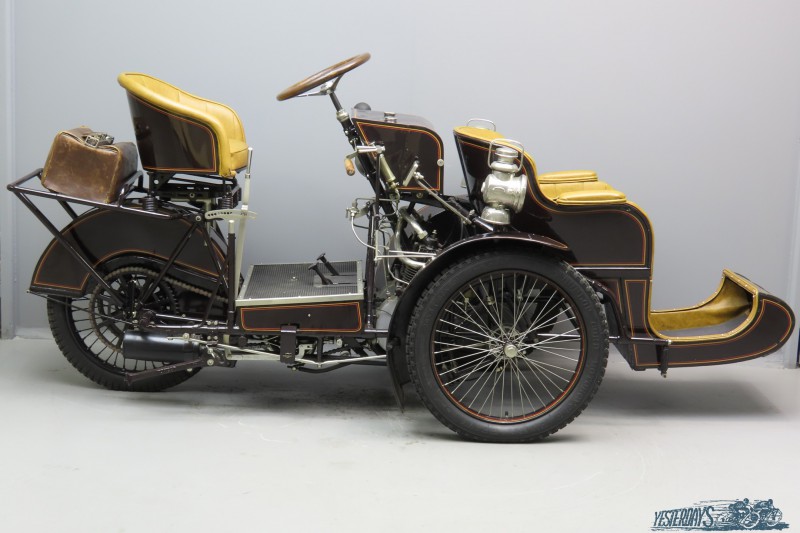 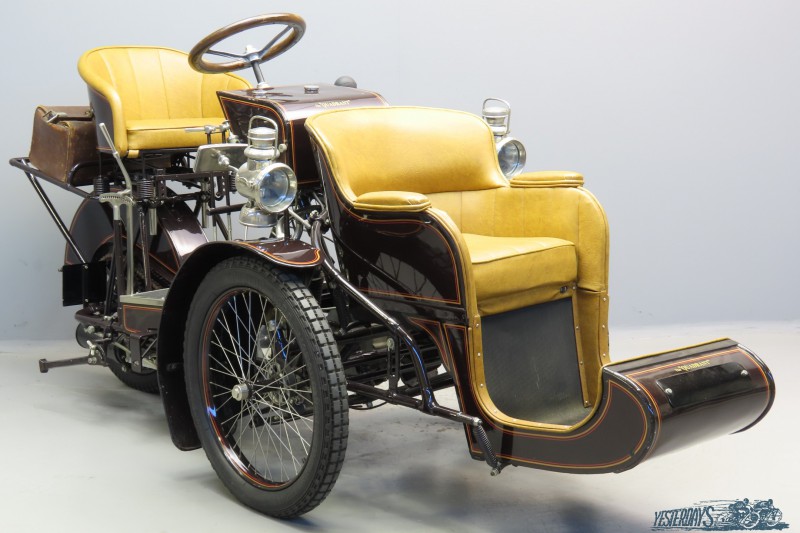 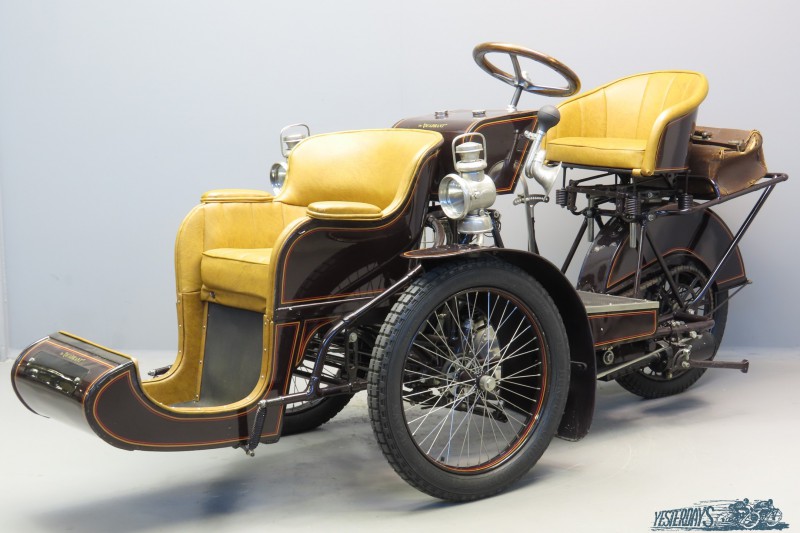 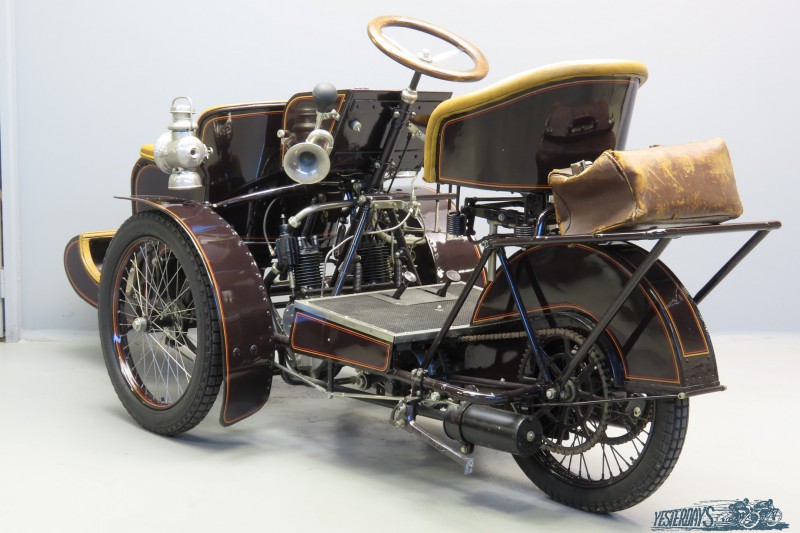 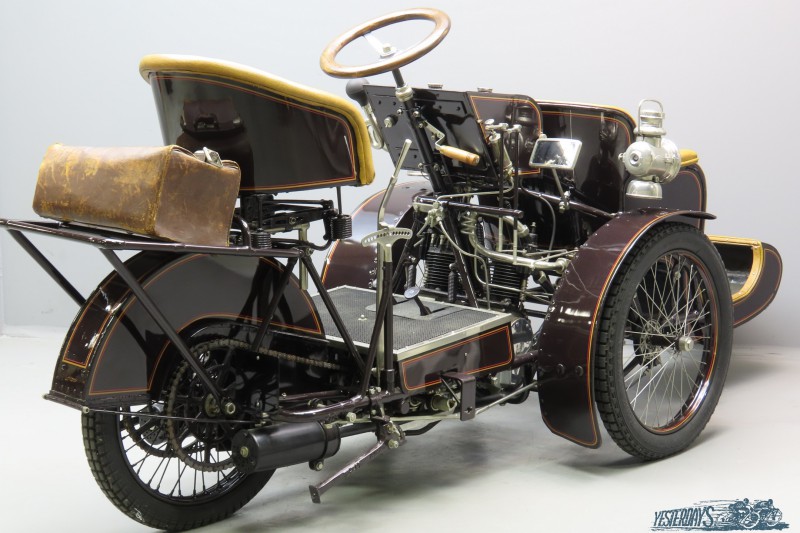 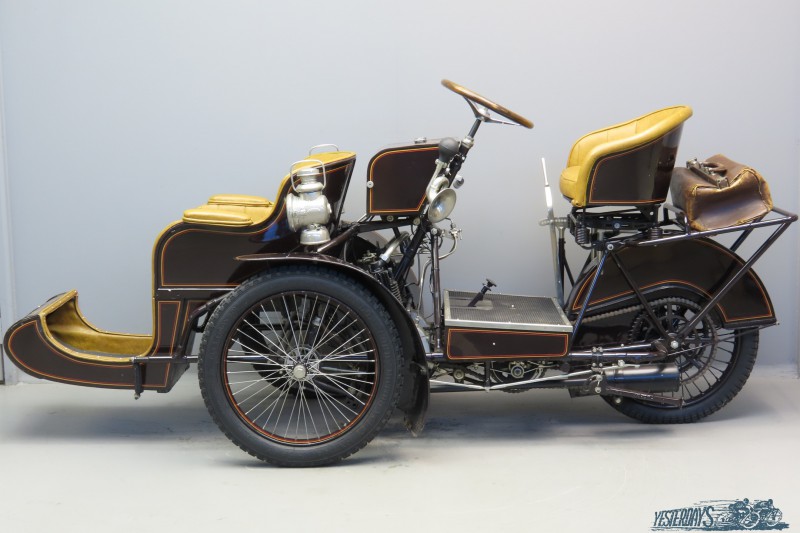 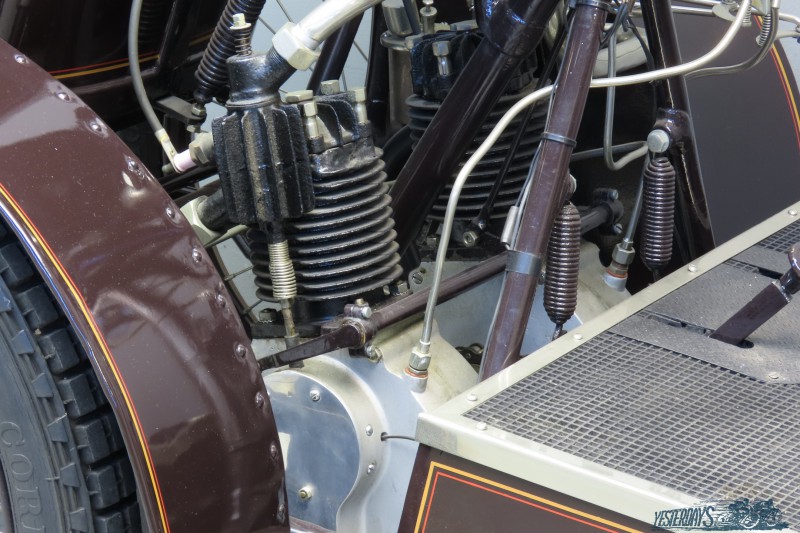 Quadrant was among the first British bicycle manufacturers to venture into motorcycle and tricycle production: their first model, equipped with the then very popular Minerva clip-on engine, appeared in 1901.
A few years later a famous long-distance rider by the name of Tom Silver was contracted by the company.
He attracted a lot of publicity in the years to come by getting excellent results in long distance events and in 1907 he became managing director of the firm.
Although several types of engines were experimented with, Quadrants were best known for their big singles; in the early twenties even a 780cc single with unit-construction gearbox was marketed. The company ceased production in 1928.
In the early years of the 20th century the tricar held a special position in the market: in comfort, ease of control and economy it stood between a car and a motorcycle.
The Quadrant Carette with wheel steering was introduced in November, 1904 and got a very favourable reception with the public.
The Carette was manufactured for about three years.
A very notable feature of this unique vehicle is that is has two separate mirrored engines.
The driver is positioned in a comfortable “Brooks” bucket seat and controls the machine with a steering wheel instead of handlebars.
“Bicycling News” of February 15, 1905 commented: “ …It is a very smart looking as well as comfortable and practical design, giving most of the facilities and comforts of a small car with less initial and running costs.
The open-backed frame and sprung bucket seat will be appreciated by tricyclists, while the well-known spiral suspension-spring insulation of the Quadrant Tricycle has been retained for the fore-carriage.
The platform upon which the driver’s feet rest is spring-insulated, and powerful pedal-applied brakes act on the steering wheel hubs and the engine countershaft.
Twin engines, air-cooled, supply sufficient power to attain a very respectable speed on the level, and as a two-speed gear and free engine are provided we seem to have got far towards the line which divides the motor cycle from the motor car”.
The idea behind the two separate engines is that for solo driving the power of one engine will suffice, but when carrying a passenger the extra power of the second engine will prove very practical. According to information from a former owner the engines are of 450cc and 500cc capacity; the 1906 catalogue does not state the capacity of the Carette engine but it does mention that the Quadrant motorcycles could be had in 3¼ HP (79×86 bore x stroke) and 3½ HP (89×88 bore x stroke).
This would correspond to 421cc and 547cc.
This Quadrant was previously registered as AD 824 , a Gloucestershire mark.
The County Council records show that AD 824 was first registered on January 4th, 1907 to one Cuthbert Rayner Booth., brass manufacturer, of The Tudor House, Mickleton.
Three further owners are listed: Tom Edward Parry of Powick, Worcester (April 1907); Francis Hugh Douglas of Malvern, Worcestershire (April 1908); and R W Dimery of Kingsthorne, Hereford (June 1909).
The Carette comes complete with twin “Duco” oil lamps, bulb horn, rear view mirror and leather traveller’s case.