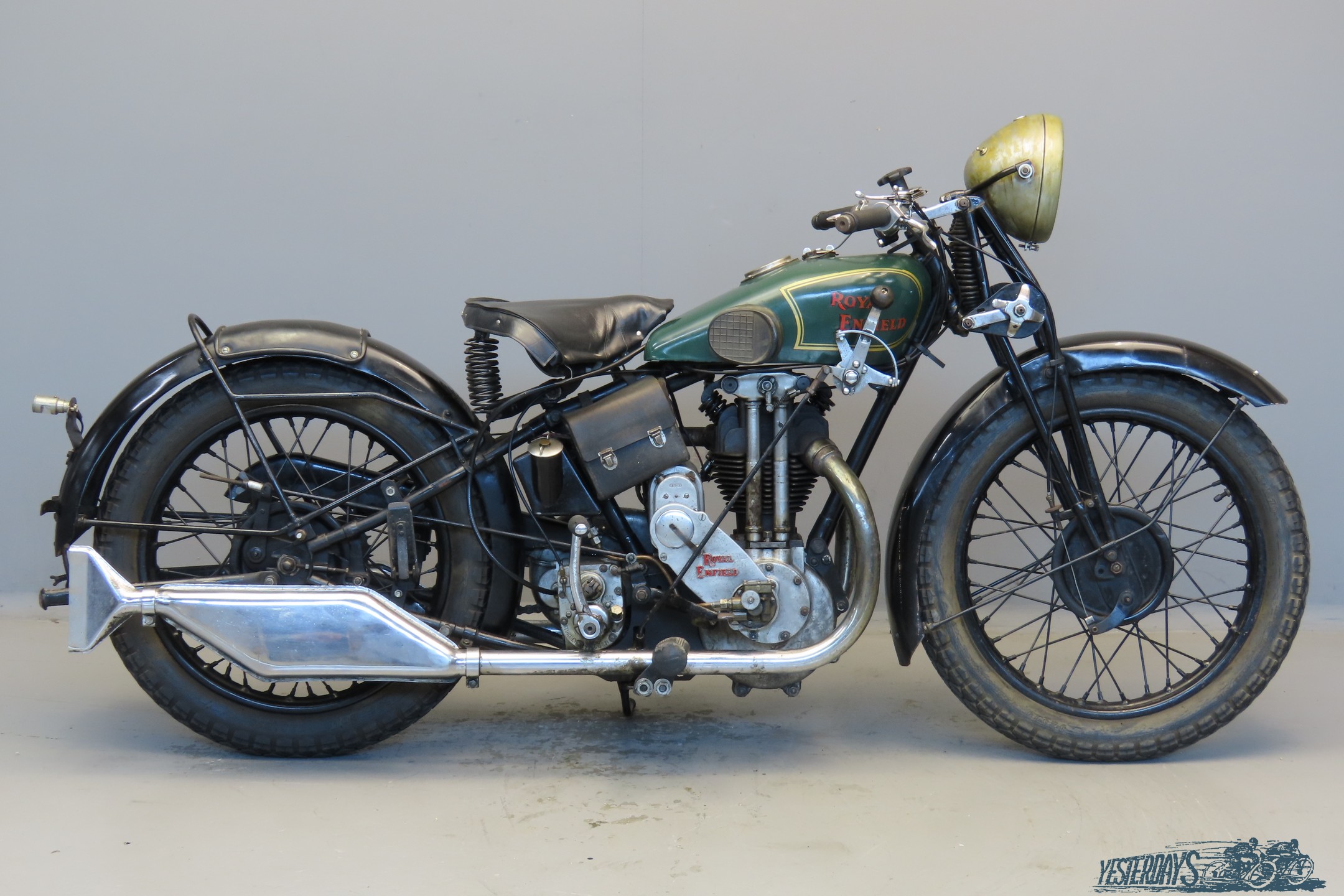 The Redditch-based Royal Enfield firm enters the motorcycle business as early as 1898: in the early days engines from De Dion power their tricycles and quadricycles; Minerva supplies the power for the first motorized cycles. In the years before WW I the company is very successful with light Motosacoche-engined V twins. These machines are equipped with the famous Enfield two-speed gear, involving twin primary chains. In the rear wheel hub a rubber cush drive is fitted, to take the punch out of the chaindrive. This feature is to be incorporated into all Royal Enfields until the very end. In the 1914 Junior TT eight out of nine Royal Enfield twins finish, with a very creditable five in the first twenty places.
After the Great War Enfield is successful with mainly two models: the light 2¼ HP two stroke and the V-twin sidecar machine. Later in the twenties the range is expanded with single cylinder four stroke models. Royal Enfield is a bit late in marketing a sporty OHV model in the 500cc class: the first is introduced at the 1928 Olympia Show as the Model 505. The 488cc engine with bore x stroke dimensions of 85.5x85mm is of Enfield’s own design and manufacture. It follows the best current practice with aluminium alloy piston, deeply finned cylinder and stiffened crankcase and driveshaft. Roller bearings are fitted to the big end and main shaft bearings. The pushrods and rockers are enclosed and automatically lubricated. To emphasize the sporty image a close ratio 3-speed Sturmey-Archer gearbox is fitted. New for 1929 are saddle tanks on most models; tank finish is still the well-known two shades of green but the 505 top model gets a tank that is finished in beige with red panels. The 505 is continued for the 1930 sales season as the E or EL (with electrics) but for 1931 only models with sloping engines are offered in the 500cc class and the trusted green tank finish comes back.
The machine on offer has spent most of its life in Denmark. It’s a well-running older restoration that is equipped with Bosch magdyno and Smiths speedometer in the tank top, that was offered as an extra. This sporty and rare OHV Enfield comes with practical side stand, leather tool bag and passenger footrests.