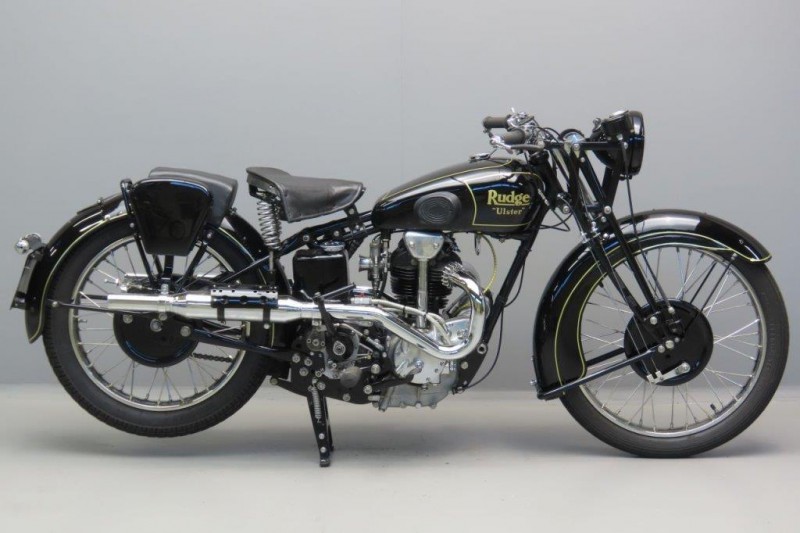 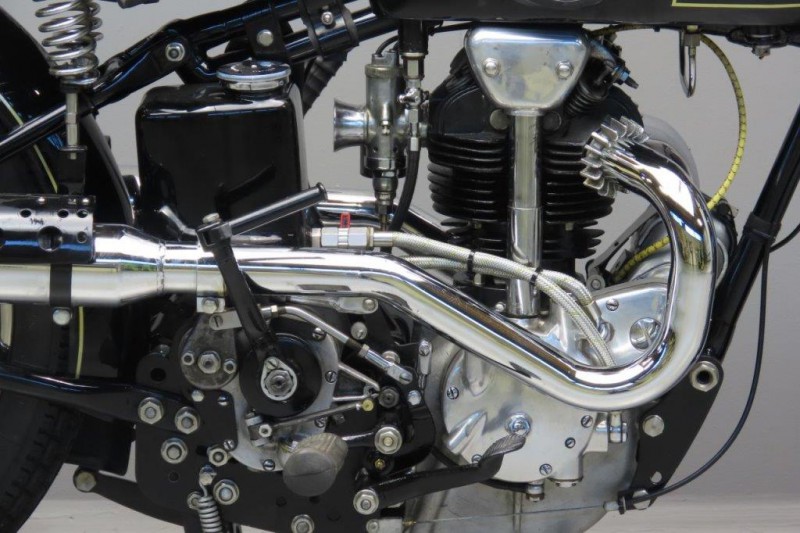 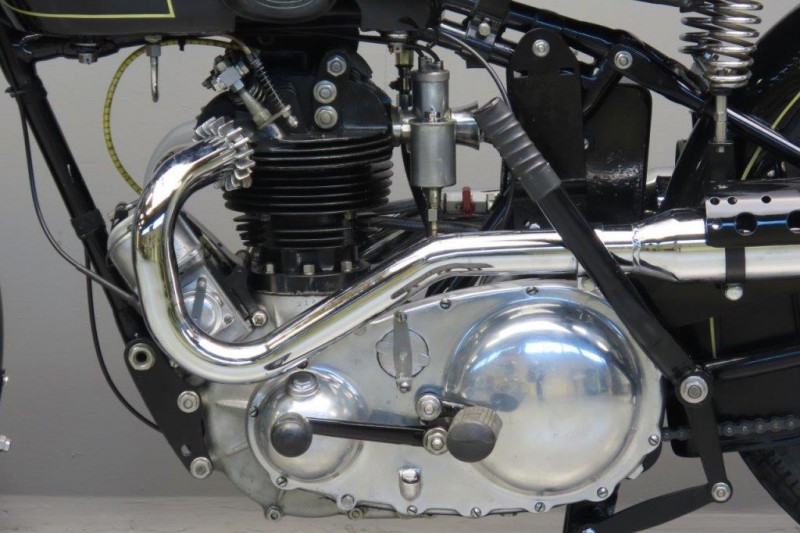 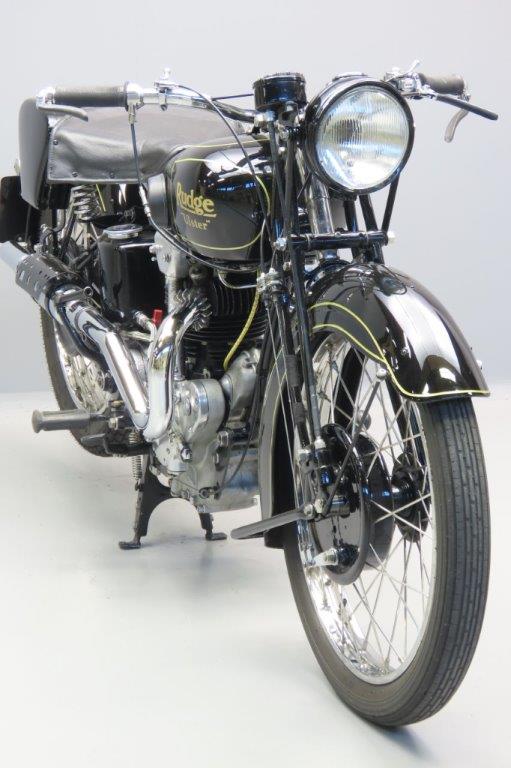 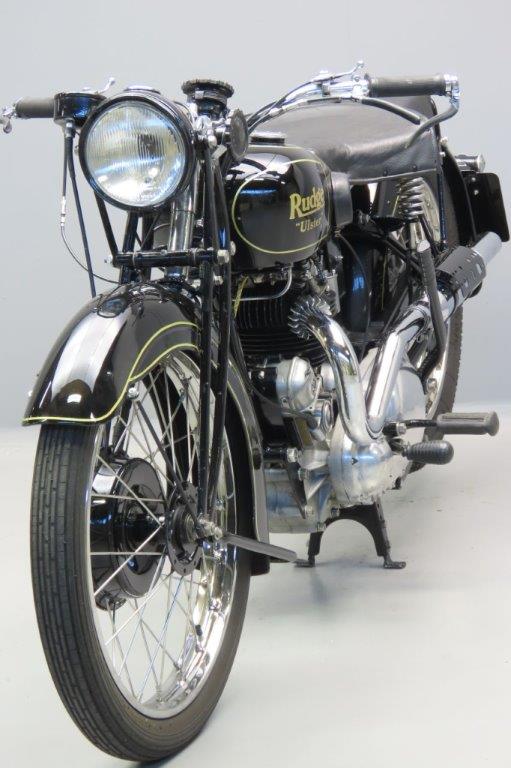 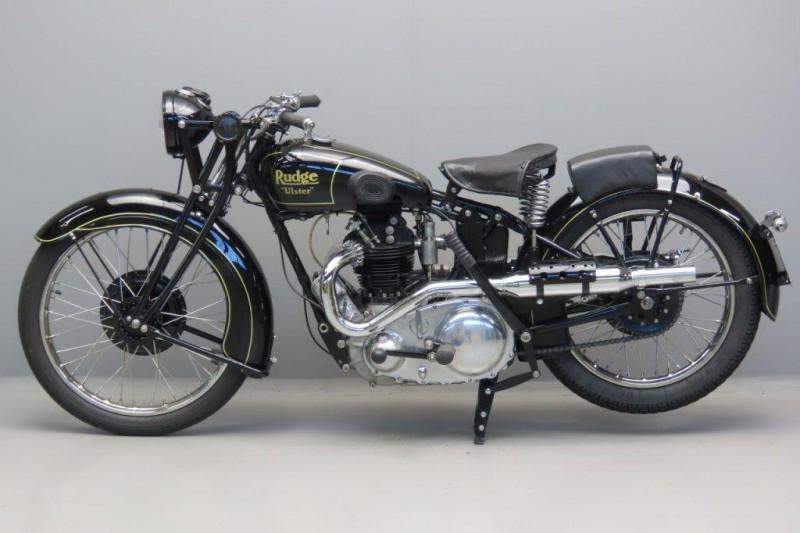 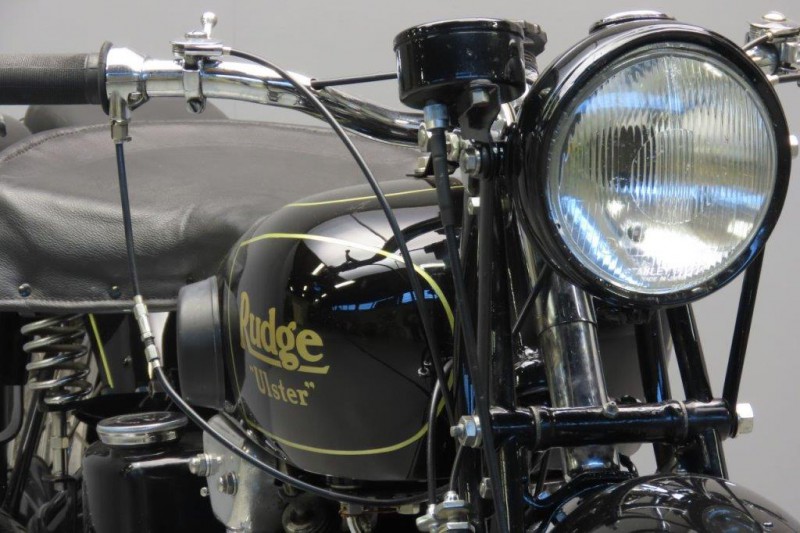 In 1928 Graham Walker managed to win the Ulster Grand Prix on a Rudge, after a heroic handlebar-to handlebar battle with Charlie Dodson on a Model 90 Sunbeam.
Since then the sporty Rudge models were designated “Ulster”.
In 1931 the engine was scaled down to 250 cc and that proved to be a real winner too, judging from 1st, 2nd and 4th places plus the lap record in the Junior TT.
Rudge used several layouts for its 4 valve models and from the 1931 model range on they settled for the semi-radial arrangement of parallel inlets (in a flat head surface) for deep breathing and radial exhausts (in a part spherical surface) for cool running.
At the same time plug size was reduced from 18 to 14 mm to allow more metal between the hole and the exhaust seats.
This layout proved very successful and was retained till the end of Rudge production in 1940.
The early thirties were difficult years for most motorcycle manufacturers and Rudge was no exception: to company struggled to survive; in 1932 only about 2500 machines were sold and the Olympia Show in November was cancelled.
To cut costs Rudge decided in January 1933 not to participate anymore officially in road racing, track racing and trials.
During 1933 only about 2000 machines would be sold and the Ulster was the most expensive model. Moreover, this machine is fitted with a 1933-only TT replica engine so it makes sense that she’s a pretty rare survivor.
The crankcase consists of an alu-nickel alloy, the cylinder head has bronze inserts and ignition and lighting are provided by a rare BTH magdyno.
A high compression piston has been fitted and the crankcase bearings have been renewed.
There’s a four speed foot-change gearbox on board and the Rudge’s owner describes this sports mount with high-level twin exhausts as “fast and reliable”.
A 1933 Motor Cycling Road Test concludes: “Several “rider’s features” are to be found in the Ulster.
The handle-operated central stand did away with all the physical effort usually involved(….) The Ulster Rudge proved itself te be an outstanding model for any purpose, and for really fast road work in particular.”
This excellently-restored machine was first registered on March 28, 1933 in the Sheffield area.
Accessories include Smiths speedometer and bum pad. With the machine comes an extensive file with technical information.