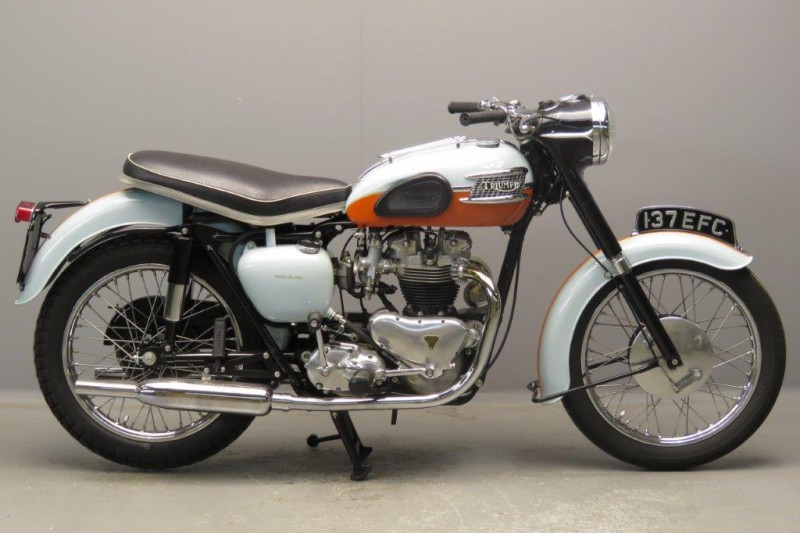 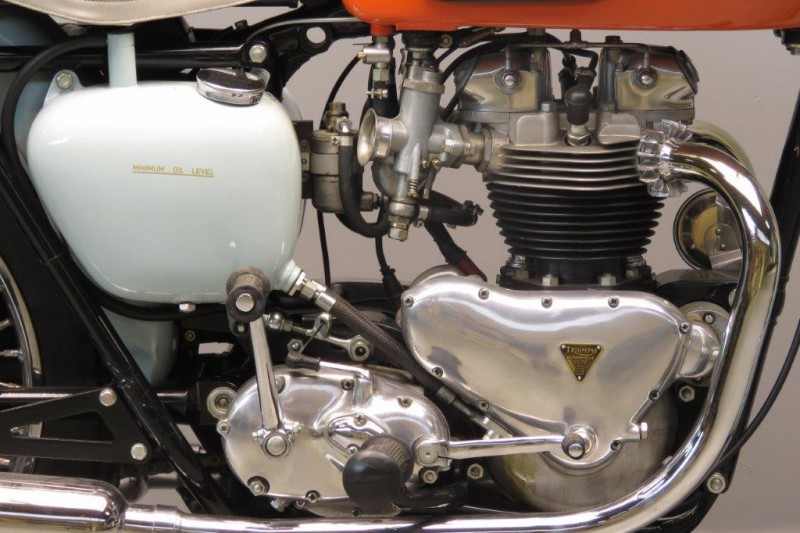 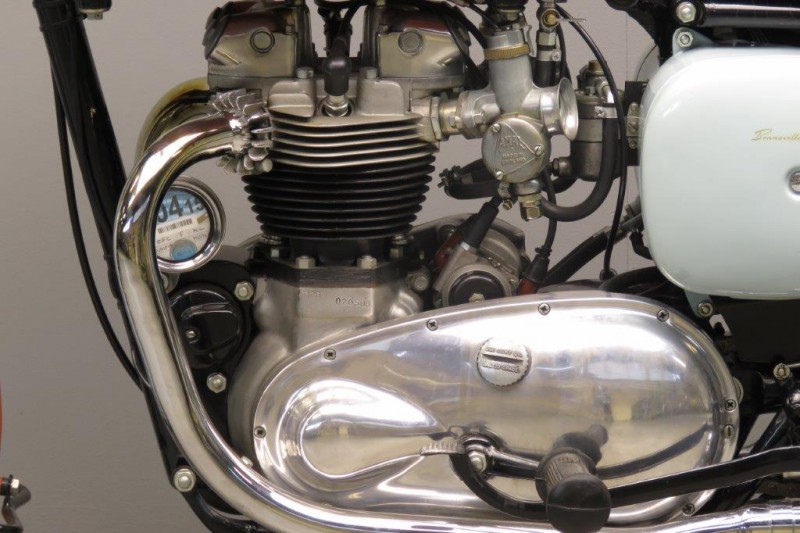 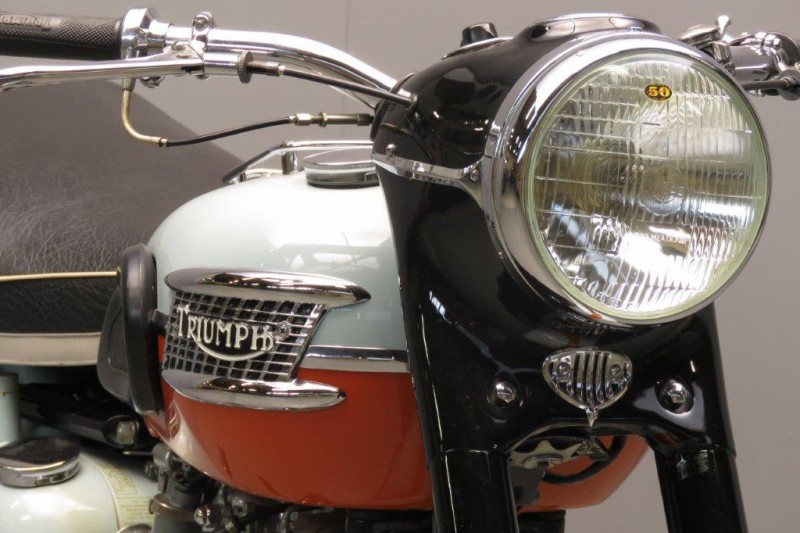 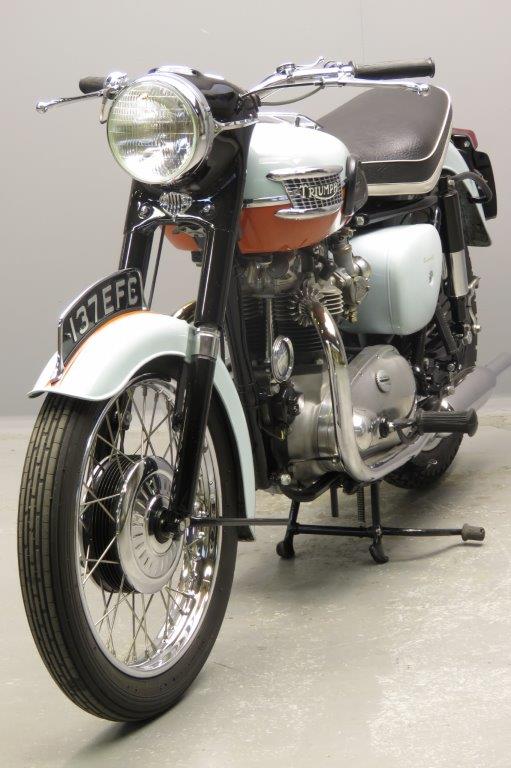 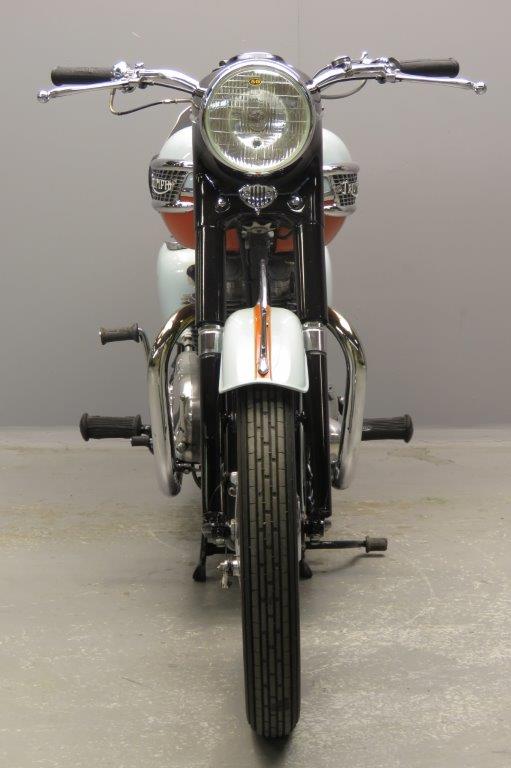 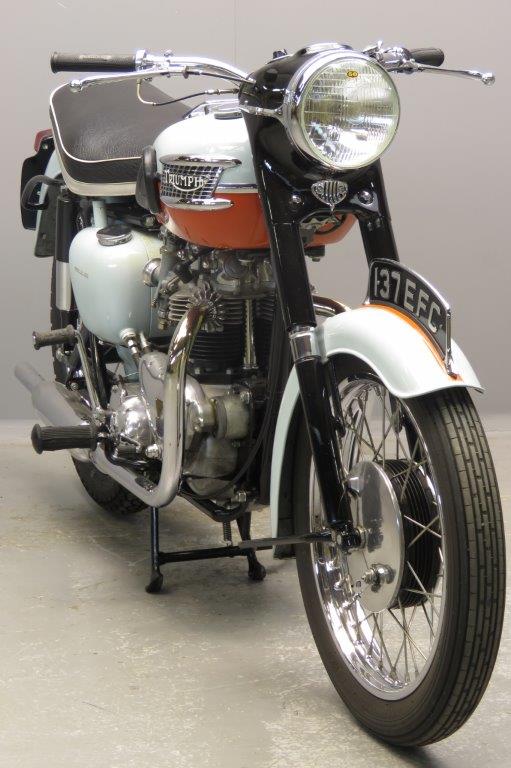 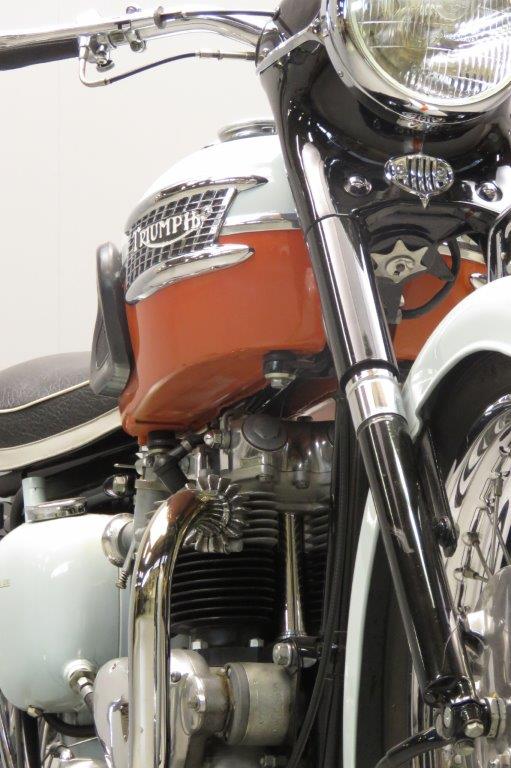 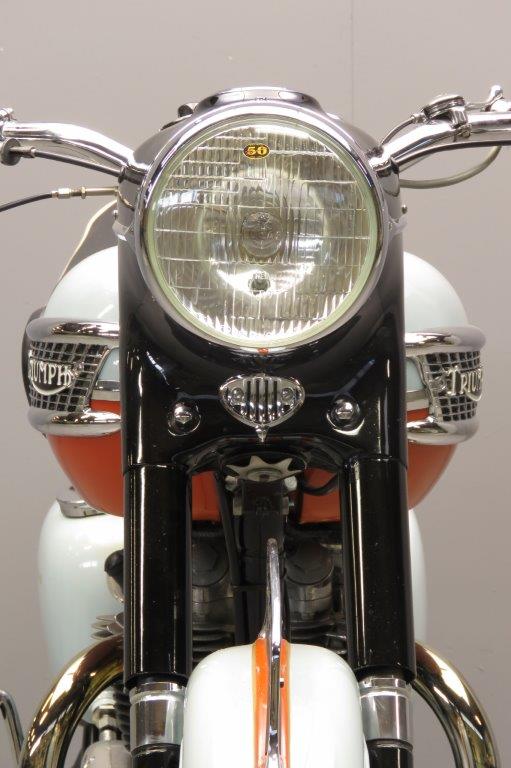 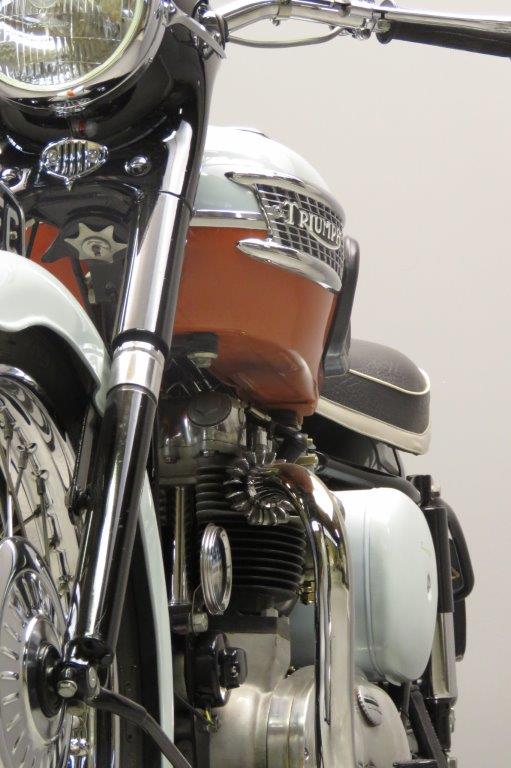 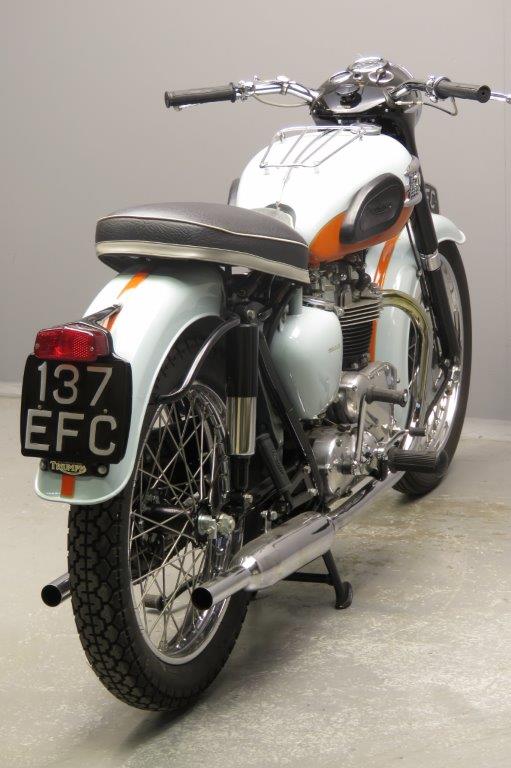 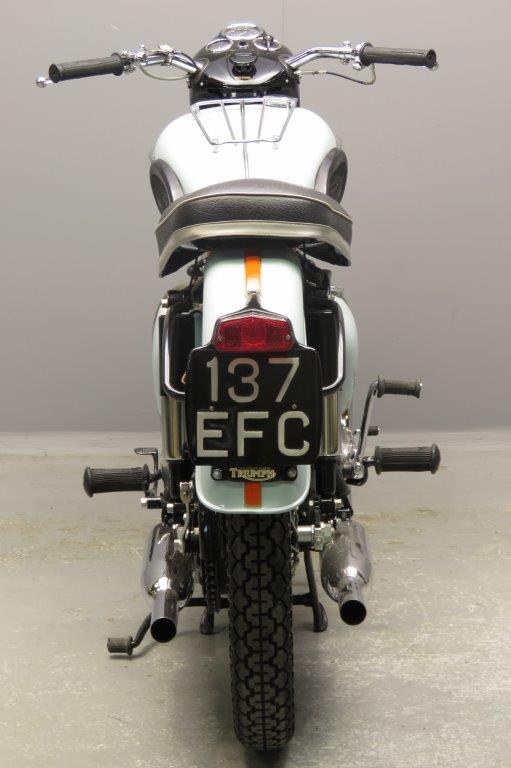 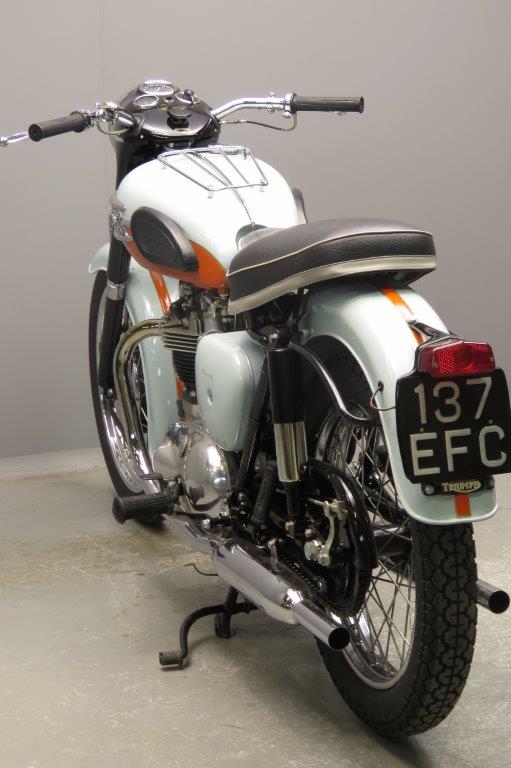 Built in 1958 and dispatched on September 12 1958 to Kings Motors, Oxford this ‘Tangerine Dream’ Bonneville was one of the very first presented to the public.
First-of-the-line examples of iconic models are always highly prized by collectors and none more so than this new-for the forthcoming 1959 season built Bonneville.
Hurriedly prepared (This is number 127 of the first batch of 200 built for its debut at the Earls Court Show (it was too late for inclusion in the 1959 catalogue) the ‘Bonnie’ arrived at a time when young motorcyclists wanted style as well as substance and had the money to pay for it. Finished in striking two-tone Tangerine/Pearl Grey with matching mudguards and black cycle parts, the bike was a real looker.
Given its now-iconic status, it’s hard to believe that not too long ago an early Bonneville was just another old Triumph, as likely as any other machine to be subjected to the customizer’s often-questionable whims.
The name ‘Bonneville’, chosen in honour of Johnny Allen’s record-breaking 214-mph record run with his Triumph-powered streamliner at the eponymous Utah salt flats, was an inspired piece of marketing. Triumph lost no time in capitalising on its technical breakthrough, announcing a new model equipped with the splayed ’head and twin Amal carburettors in September 1958: the Bonneville. Testing a T120 ‘Bonnie’ , Motor Cycling found that Triumph’s range-topping sportster possessed abundant vitality. “With exceptional top-end performance goes extraordinary vigour and tractability at low and medium speeds – a combination which makes it perhaps the fastest point-to-point roadster produced in Britain today.”
The Bonneville was much more than a T110 fitted with the splayed-port cylinder head and twin carburettors, there was, of course, more to it than that. As well as the performance-enhancing top end, the Bonneville, together with the rest of Triumph’s twins, incorporated a new, stronger crankshaft assembly that development had shown was necessary to cope with the increased power. The latter now stood at 46bhp, an improvement of some 15% over that of the contemporary single-carb T110. Works tester Percy Tait had achieved 128mph at MIRA on a development bike, and even though this figure proved beyond the reach of the production version, the Bonnie was at least as fast as the opposition and much better looking, which was all that mattered.
The first 1958-59 model Bonneville was the only one of the many versions to feature the headlamp nacelle, and only the first series produced had the distinctive ‘Tangerine Dream’ livery.
Quality motorcycles, cars and art prove to hold more value than any other traded element in the world. Unlike other valuables and commodities, the value of these goods is inherent and stable. Currency fluctuations, bank crises and stock market variations make no difference. You will reach your investment target safely by investing in a motorcycle like this one. This desirable and beautifully restored 1958 Triumph Bonneville is a very well running, reliable and well presented “first off the line” iconic motorcycle.