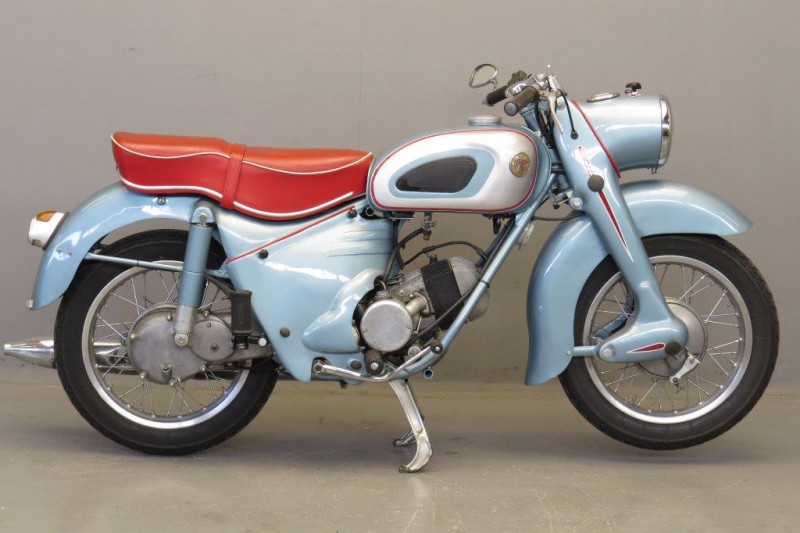 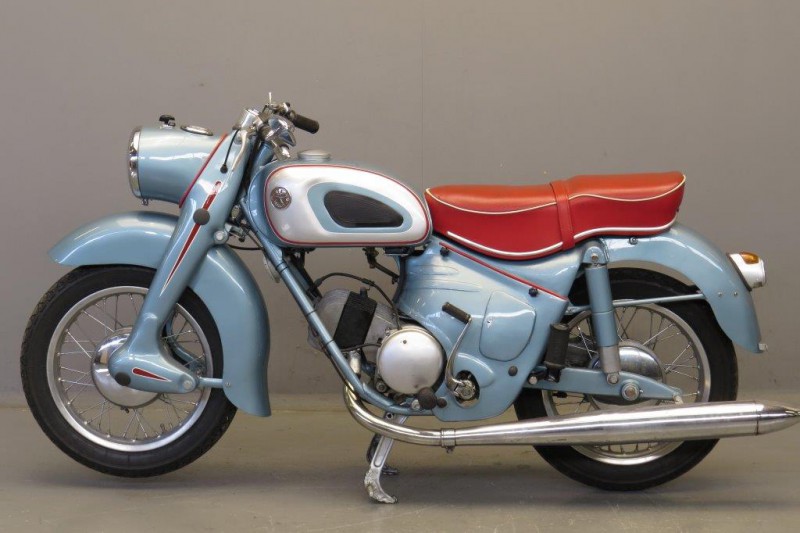 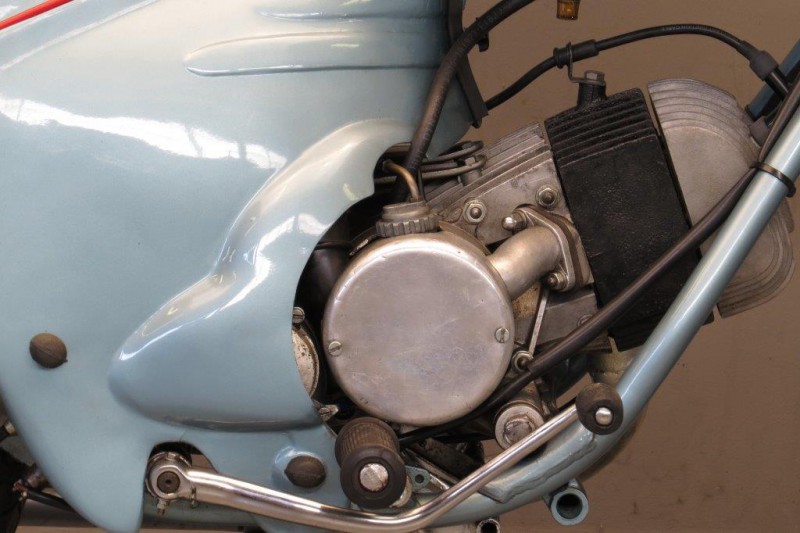 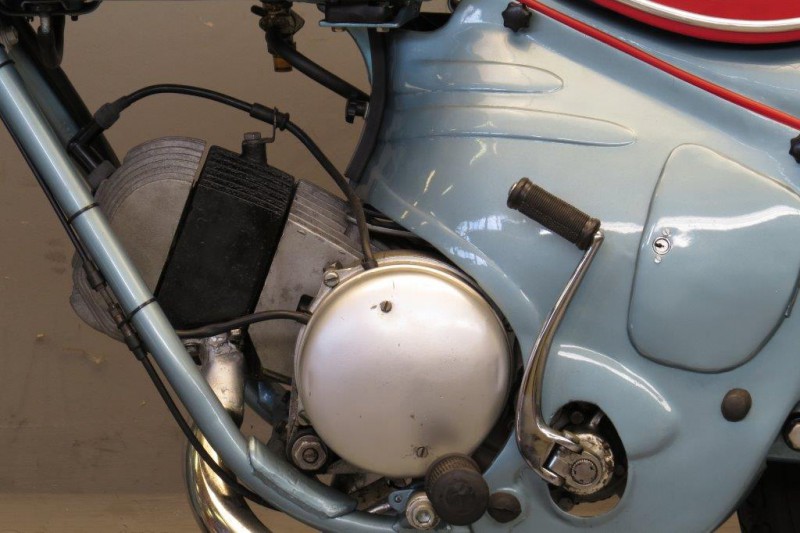 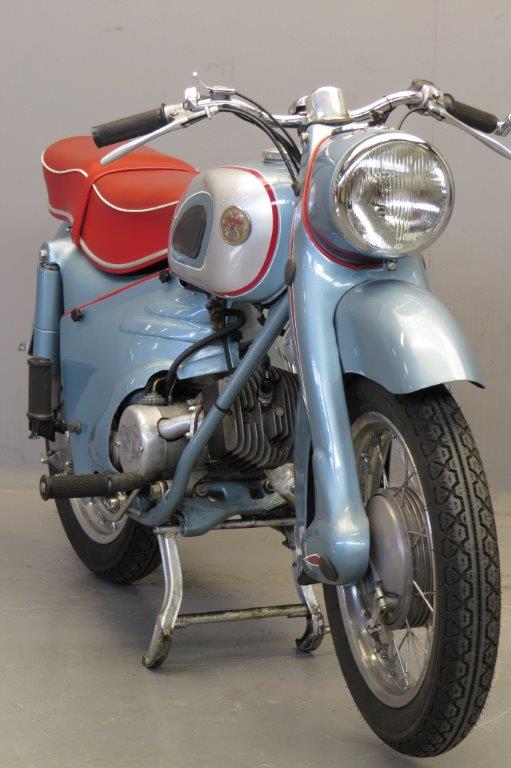 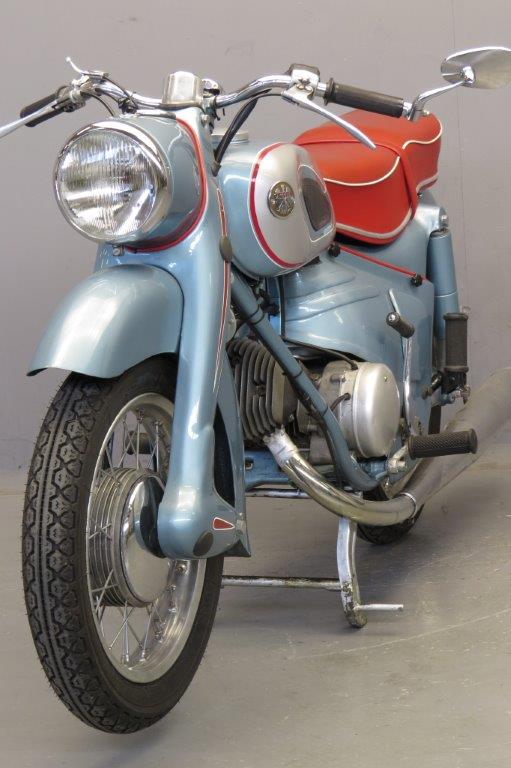 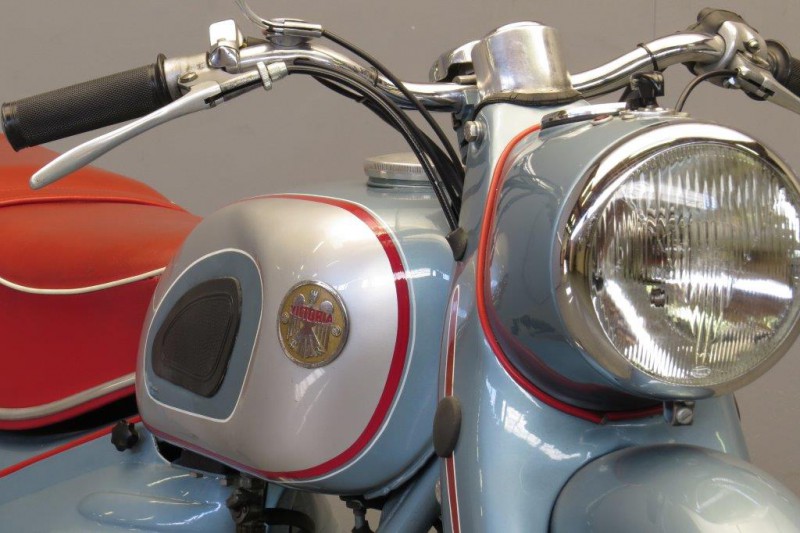 After leaving the Imme company in 1951, Norbert Riedel (see: https://www.yesterdays.nl/archive-c-131.html?filter_id=252&sort=2a )returned to Victoria where he headed design on the KR 21 Swing motorcycle and Peggy scooter, both released in late 1954.
Both were interesting and advanced machines that featured some elements that were clearly a product of Riedel’s design process, an evolution of some of the ideas introduced on the Imme R100.
Much like the Imme the Victoria Swing and Peggy have their power unit rigidly mounted to the rear swingarm, pivoting within the frame and bobbing up and down in line with the rear suspension – hence the name “Swing”, which was soon nicknamed “das schwebende Motorrad” (“the floating motorcycle”).
Both machines use a 197cc 65x60mm horizontal two-stroke single mated to a four-speed transmission with a fully enclosed chain final drive, with the cast alloy chain housing doubling as a structural element of the swinging arm, a traditional duplex cradle frame with a half-bathtub rear fender and an exposed powertrain.
Both the Peggy and the Swing were notable for offering electric starting* long before the “electric leg” became commonplace in production motorcycles, as well as introducing a unique electromagnetic push-button gearshift integrated into a gearbox that applied the linear shift mechanism introduced by Riedel on the Imme.
The system, dubbed Swing-Blitz-Schaltung (SBS), uses a four-button gear selector switch mounted on the left hand handlebar which allows the rider to select individual gears.
Four doughnut-shaped electro magnets are arranged in line around the draw-key shaft.
When a button is pressed on the selector, one of the four magnets energizes and pulls a cylindrical barrel threaded onto the end of the shaft into the position needed to engage the individual gears.
As on the Imme the gears are engaged by detent balls arranged within their hubs, pushed outward by a bulb-shaped wedge on the end of the selector shaft to lock the gear.
Neutral is selected by activating both the 1st and 2nd gear magnets, which will hold the wedge between the two positions and allow the gears to freewheel.
While ingenious and unique, the system can be fragile and prone to failure, easily accomplished if the rider selects the wrong gear at the wrong time….
You will not find another Victoria Swing easely..
Source: http://www.odd-bike.com/2014/05/imme-r100-purity-of-design.html