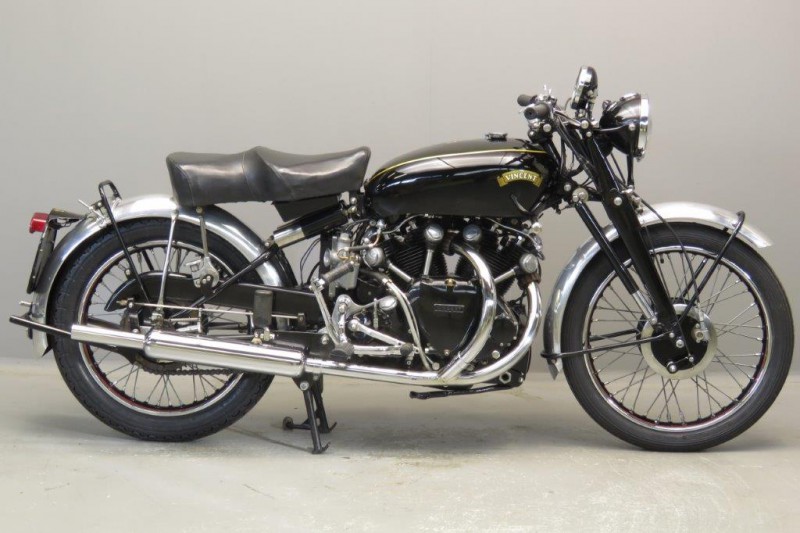 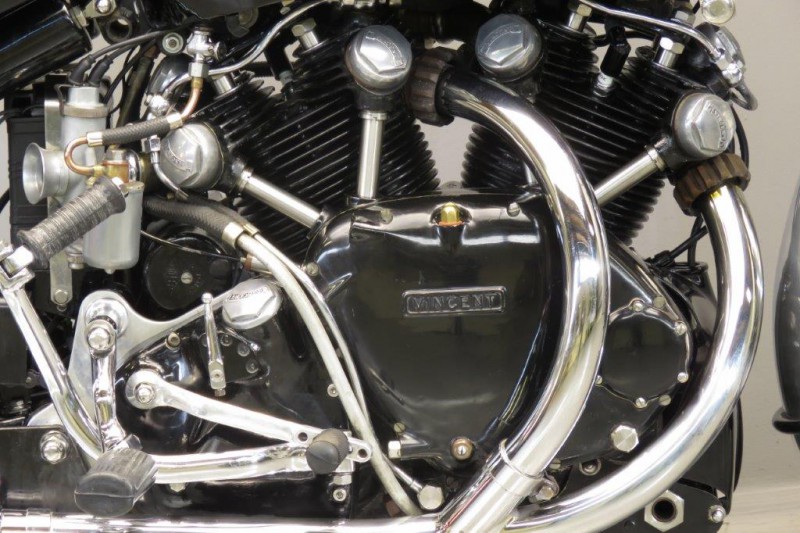 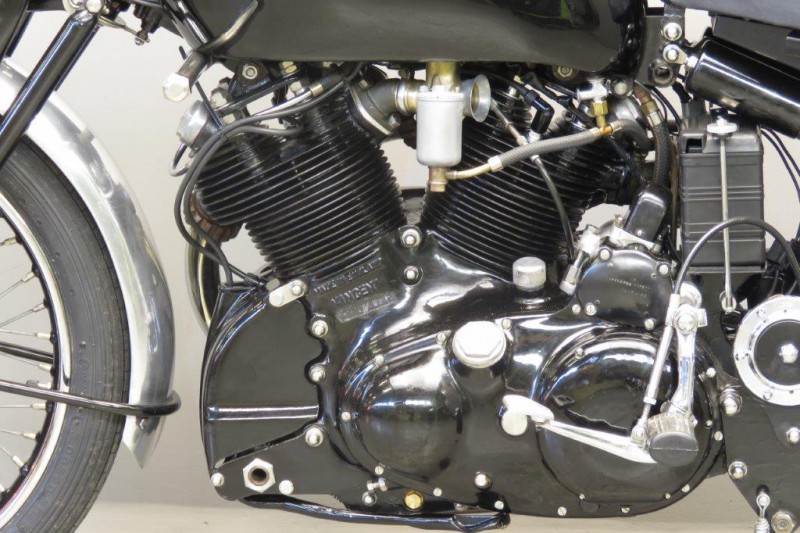 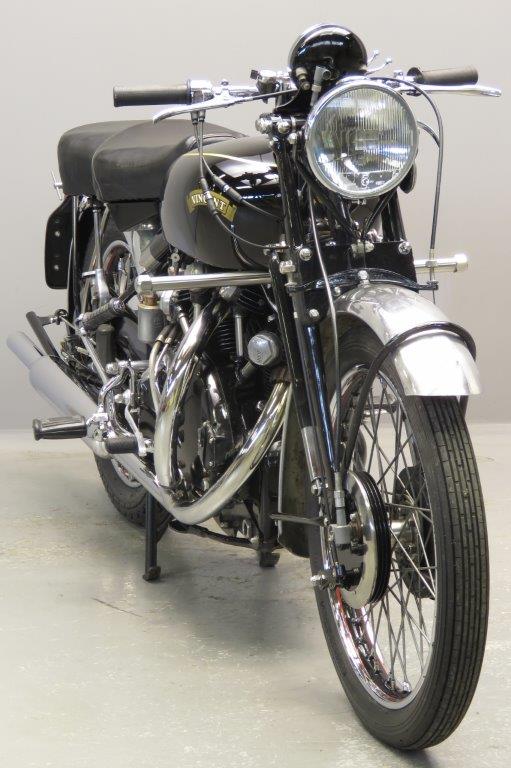 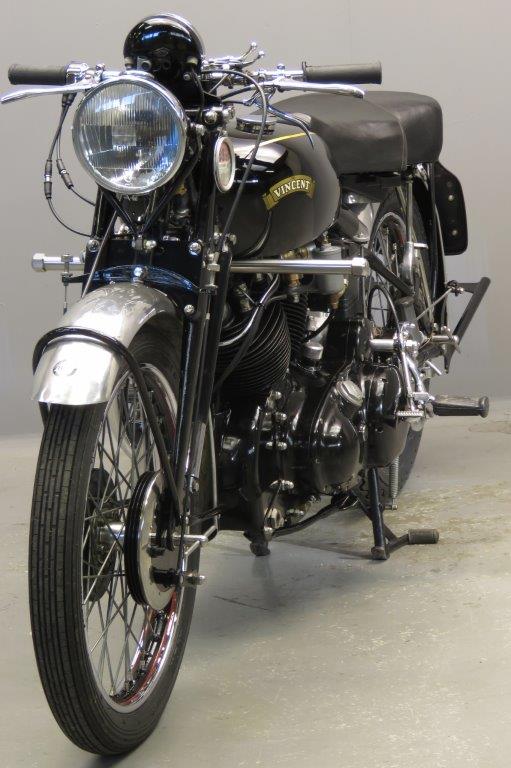 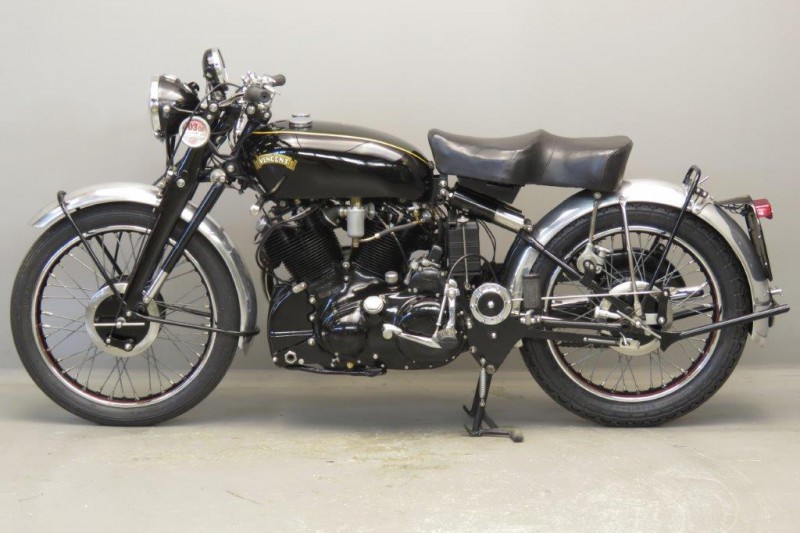 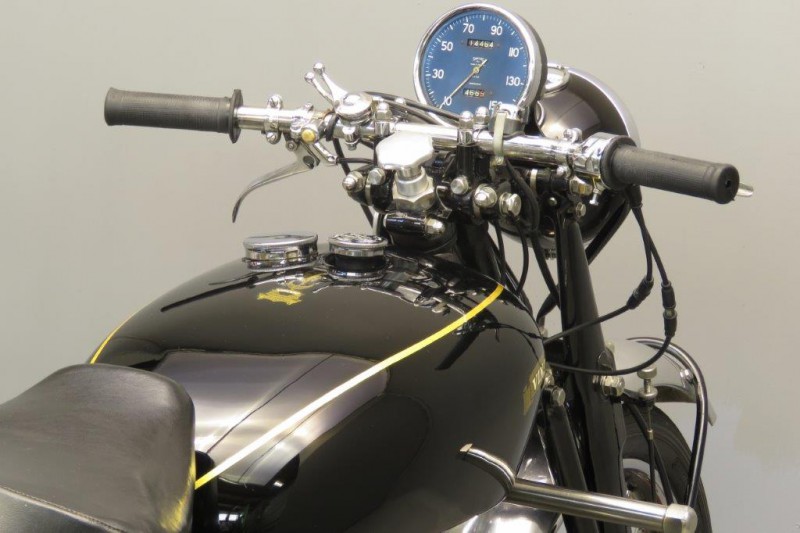 Ever since the Series A’s arrival in 1937, the Vincent v-twin has been synonymous with design innovation, engineering excellence and superlative high performance.
From Rollie Free’s capture of the ‘world’s fastest production motorcycle’ record in 1948 on a tuned Series-B Black Shadow to the final, fully enclosed Black Knight and Black Prince, Philip Vincent’s stress on appearance and performance is legendary.
His machines bristled with innovative features, offering adjustment of brake pedal, footrests, seat height and gear-change lever.
The finish was to a very high standard commensurate with the cost of the machine, which was virtually double that of any of its contemporaries.
But above all else it was the v-twin’s stupendous performance that captivated motorcyclists, whether they could afford one or not.
The appeal of the Vincent, and the Black Shadow in particular, lay in its ability to out-perform just about every other vehicle on the road, and in the early post-war years there was nothing to compare with it.
This was a time when the average family sedan was barely capable of reaching 70mph, and not until the advent of Jaguar’s XK120 was there a production sports car that could live with the thundering v-twins from Stevenage. Indeed, when it was introduced in 1946, the Vincent-HRD Series-B Rapide was immediately the fastest production motorcycle on sale anywhere, with a top speed of 110mph.
The basic design clearly had even greater potential though, as was demonstrated by the tuned Rapide known as ‘Gunga Din’, ridden by factory tester George Brown, that proved unbeatable in UK motorcycle racing in the late 1940s.
Private owners too had expressed an interest in extracting more performance from their machines, all of which convinced Philip Vincent that a market existed for a sports version.
Despite opposition from within the company’s higher management, Vincent pressed ahead with his plans and together with Chief Engineer Phil Irving, clandestinely assembled a brace of tuned Rapides.
The prototypes incorporated gas-flowed cylinder heads, Comet cams, polished con-rods and larger carburettors, these changes being good for a maximum output of 55bhp despite a compression ratio limited to only 7.3:1 by the 72-octane petrol that was the best available in the UK at the time.
Ribbed brake drums were fitted to cope with the increased performance, while in a marketing masterstroke Vincent specified a 5″-diameter ‘150mph’ speedometer and black-finished engine cases for his new baby – the Black Shadow.
With a claimed top speed of 125mph, soon born out by road tests, the Vincent Black Shadow was quite simply the fastest road vehicle of its day.
Deliveries commenced in the spring of 1948 and only around 70-or-so Series-B Black Shadows had been made before the Series-C’s introduction at that year’s Earl’s Court Motorcycle Show.
This Vincent  Black Shadow was despatched to the USA in May 1954 were it stayed till 1979 .
Accompanying documents identifying two of its owners in California and Pennsylvania respectively, though it should be noted that the machine is identified only by its engine number.
On file is a letter concerning work undertaken before the Vincent left the USA.
Its late owner who had the machine for the last 38 years, purchased the Vincent in September 1979, and it was first registered in the UK on 2nd October ’79.
His accompanying notes reveal that the machine was used until November 1980 without significant problems, and then taken off the road for a rebuild.
There are numerous bills on file for this work, much of it undertaken by the respected marque specialists, Maughan & Sons, including a complete overhaul of the engine and forks.
Once the rebuild had been completed, the odometer was zeroed on 1st June 1981.
A further note states that in February 1982 the decision was made to undertake a concours restoration, and the Vincent was sent to Ray Mawson of Skellingthorpe for this to be carried out.
Many parts were replaced with stainless equivalents, a new exhaust system fitted, the magneto overhauled, and a JG 12-volt electronic regulator installed.
Subsequent notes are concerned mainly with oil changes, while the last records the renewal of the drive chain (in February 2001 The most substantial history file also contains SORN paperwork, a quantity of expired MoTs and tax discs, numerous invoices, assorted technical literature, and old/new British V5C Registration Certificates.
Ridden by Mark Forsyth, this machine was featured on the cover of Performance Bikes magazine in 1988 to illustrate an article about knee sliding (copy available).
Currently this Vincent Black Shadow carries a tax disc that expired on 31st March 2008, and it is understood that the machine has not been used by the former owner since then.
Recently this Vincent has been re-commissioned by a Vincent specialist (Bill on file) and she is ready for the road.
Vincent`s were indeed legendary in their own lifetime, and in the more than half-century since production ceased, the esteem in which this iconic motorcycle is held has only increased, fuelling the demand among discerning collectors for fine examples of the marque, such as that offered here.