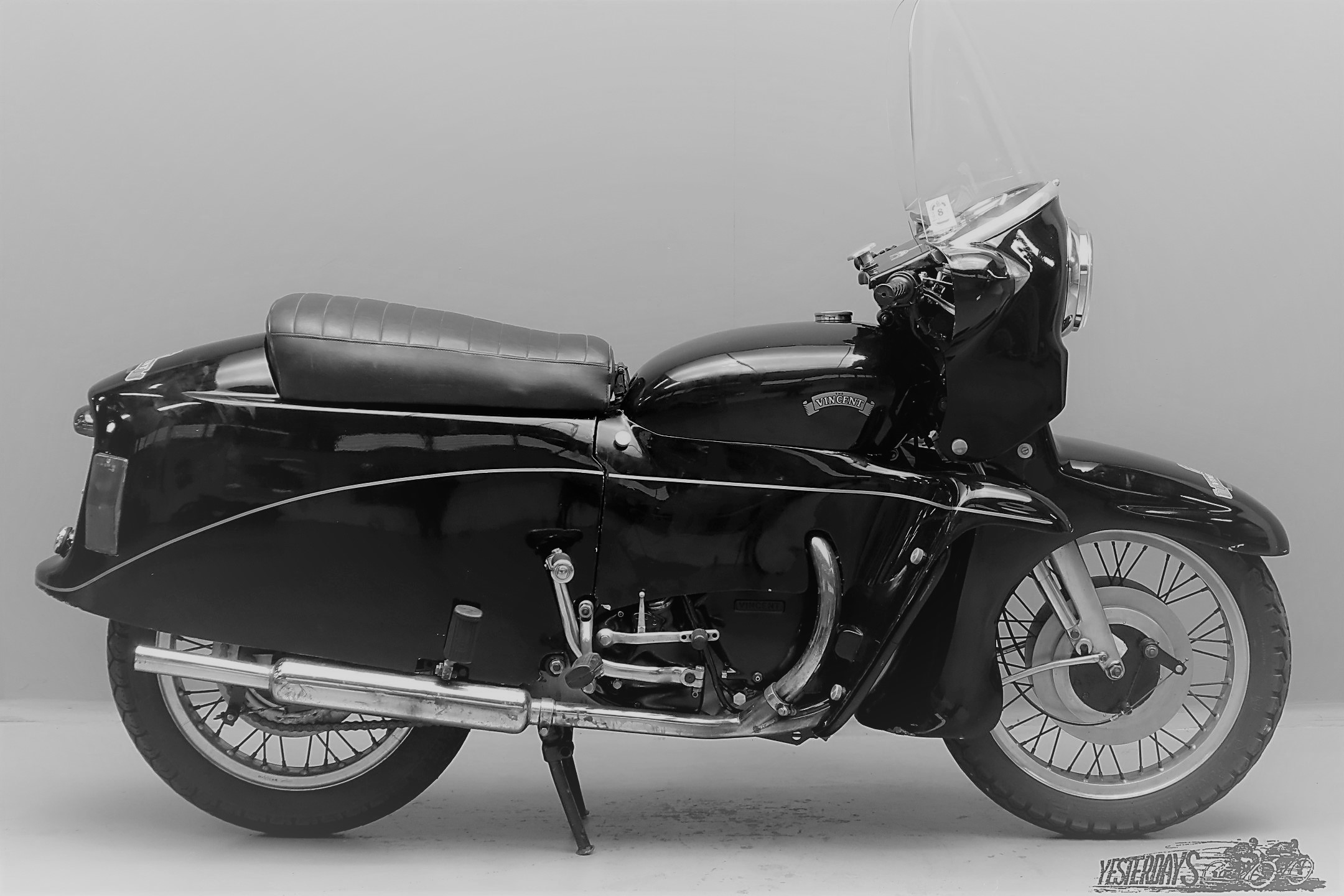 Ever since the Series A’s arrival in 1937, the Vincent v-twin had been synonymous with design innovation, engineering excellence and superlative high performance. It was to be the Vincent that would usher the company into a bold new future, a ‘two-wheeled Bentley,’ in the words of Philip Vincent, who considered the design his best work.
Its flowing, all-enclosing bodywork would set new standards of refinement, allowing riders to commute to work in a crisp business suit, not leathers or nasty old waxed cotton.
In September 1955, when it was revealed that production of the Stevenage-built machines would cease, the news stunned the motorcycling world. It had been decided that the firm’s future lay in more profitable lines of manufacture, and just 100 more of the fabulous v-twins would be completed.
By the time its demise was announced, Vincent’s final twin – the Series-D – had been in production for just six months.
It had been Philip Vincent’s belief that provision of ample weather protection combined with enclosure of engine and gearbox, would make the Vincent Series-D the ultimate ‘gentleman’s motorcycle’, though delayed delivery of the glass fibre panels – plus continuing demand for traditionally-styled models – resulted in over half the production leaving the Stevenage factory in un-enclosed form.
The enclosed Rapide and Black Shadow were known as Black Knight and Black Prince respectively.
Other Series-D innovations included a new frame and rear suspension, a user-friendly centre stand, plus many improvements to the peerless v-twin engine.
When production ceased in December 1955, around 460 Series-D v-twins had been built, some 200 of which were enclosed models.
Frame number ‘RD 12611B’ originally belonged to a Series-D Black Shadow made in 1955, while engine number ‘F10AB/1/7133’ is that of a Series-C Rapide made in June 1951.
Subsequently modified to ‘Black Prince’ specification with that model’s characteristic enclosures, it was rebuilt by a previous owner and reregistered in 1973.
The machine was acquired by the current owner circa 1976.
In common with many Vincent twins, this example incorporates numerous upgrades including improved enclosures; dashboard instrumentation; alloy brake sleeves; Amal Concentric Mk2 carburettors; a modern multi-plate clutch; 18″ Borrani alloy wheel rims; flashing indicators; 12-volt electrics; electric starter; and electronic ignition.
During the present ownership the engine has been rebuilt by recognised Vincent specialist Bob Dunn to include new cylinders (liners/muffs), pistons and valves.
The bike has also completed two tours of New Zealand with the Vincent Owners Club.
Benefiting from long-term enthusiast ownership and a ‘no expense spared’ attitude to maintenance, the machine is offered with a current registration document and an October 2019 invoice totalling £950 for works including fitting of a refurbished magneto, new spark plugs and HT leads, strip of the front carburettor, fairing screen and various other works.