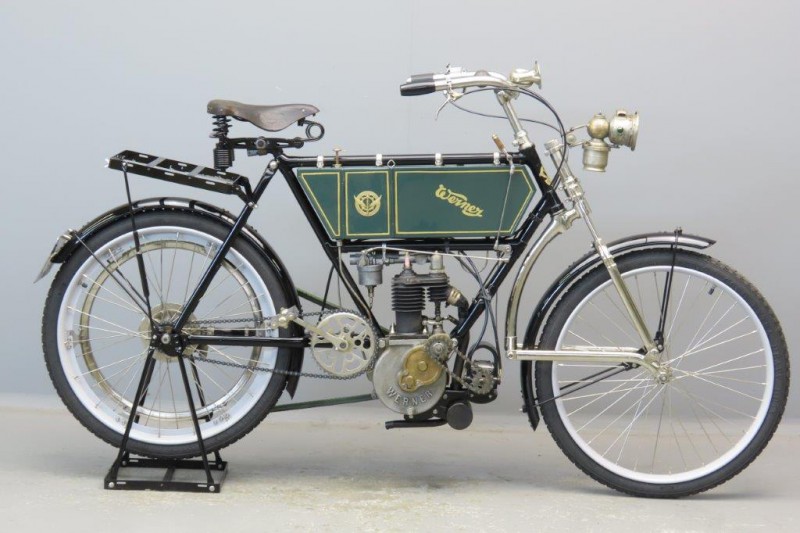 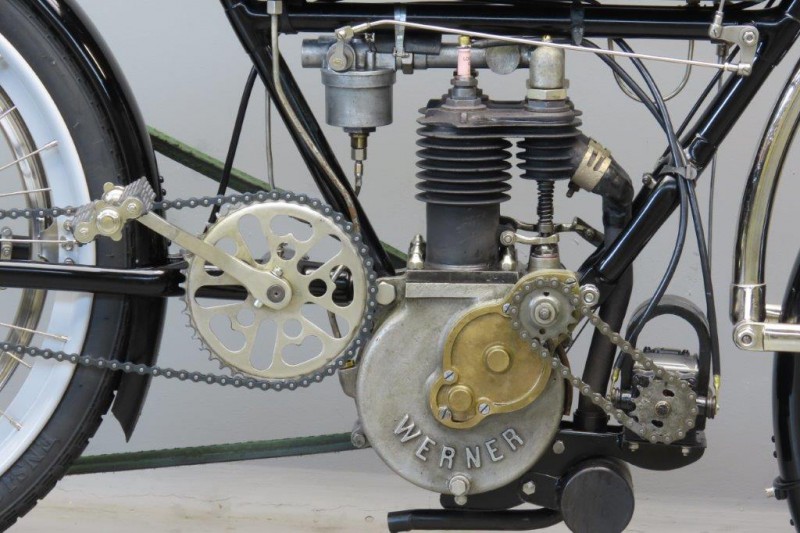 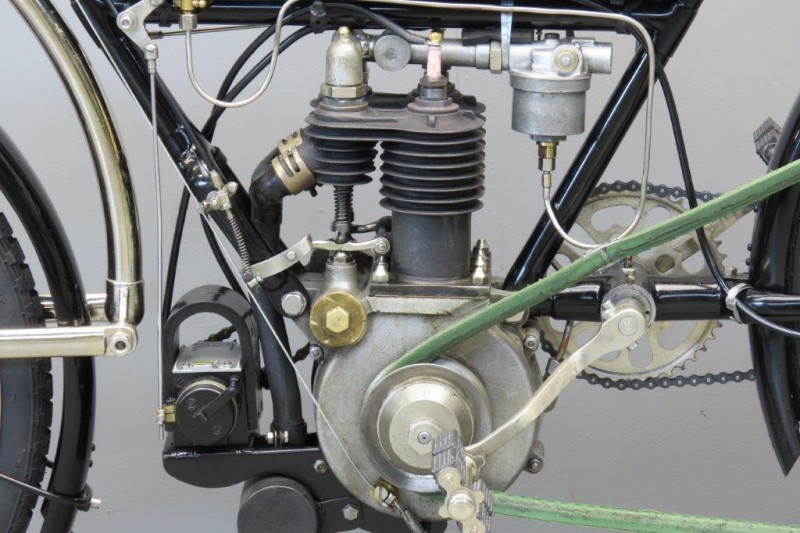 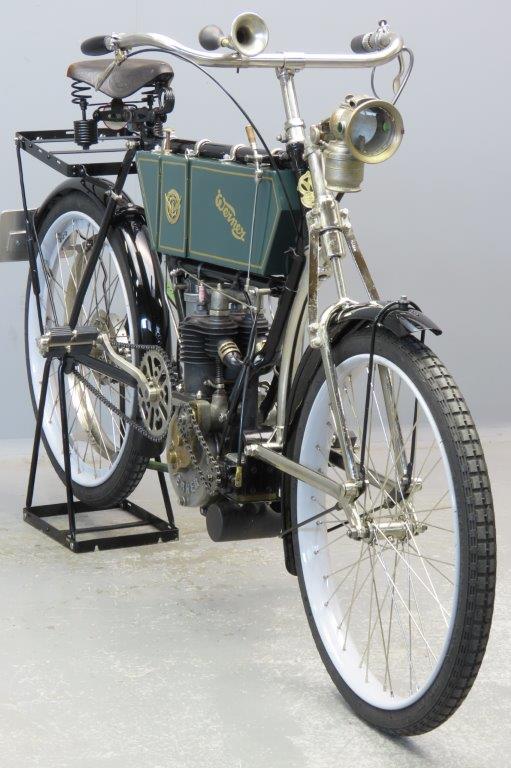 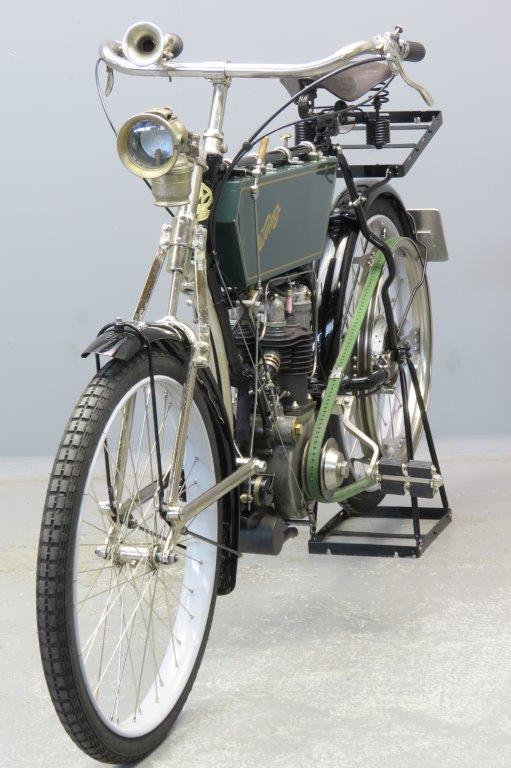 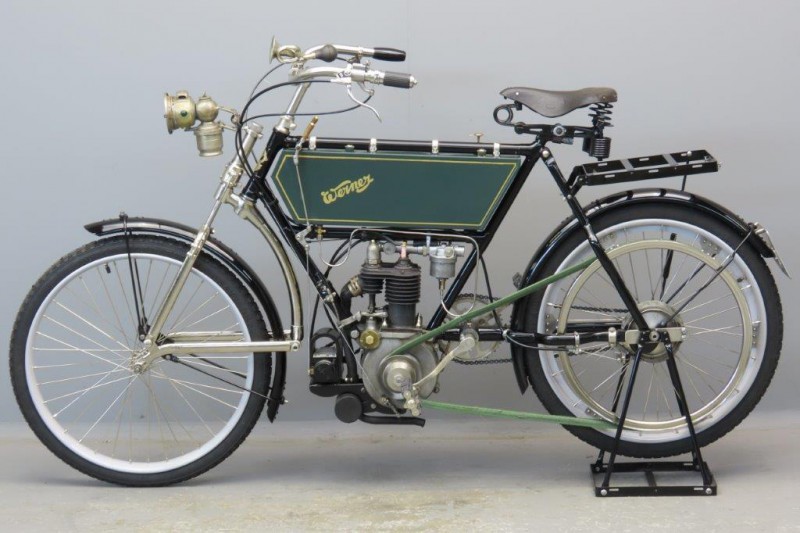 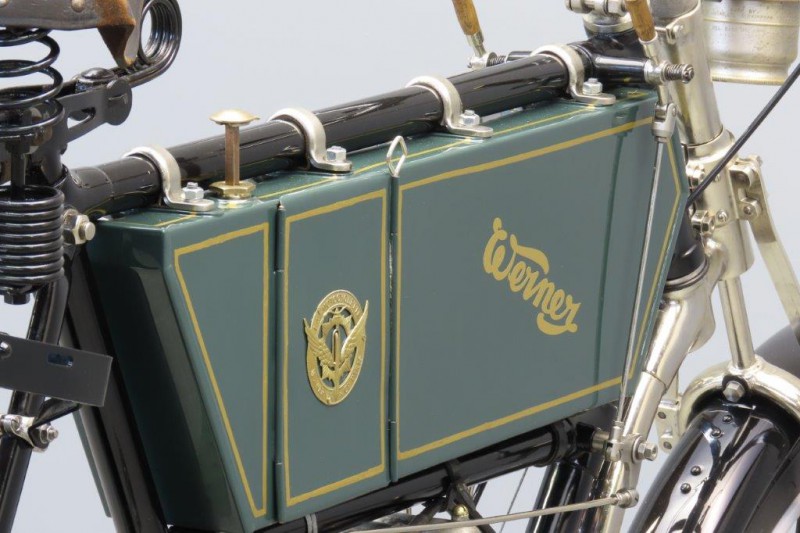 The Brothers Eugene and Michel Werner start their experiments with a bought-in De Dion type petrol engine in 1896.
In 1897 they consider their machine practical enough to be put on the market.
It’s presented under the name of ‘Motocyclette” and this word will soon become the generic French word for “motor cycle”.
The little 216cc engine is placed in front of the steering head and has a surface carburetor and hot tube ignition.
The Motocyclette catches on and the design is perfected a little bit more each year. The company claims that between 1898 and 1901 some 3,600 Werners are sold.
By the end of 1901 a new type of Werner is introduced with the engine in the bracket position.
Werner is not the first manufacturer to place the engine in this position, but previous designs never got much publicity.
The new Werner is a sensation at the Paris Show and for a long time to come the typical position of the engine that we consider so common now will be known as “the New Werner position”.

In 1903 and 1904 the single cylinder models are further improved and at the Paris Salon at the end of 1904 a remarkable new model is presented, a parallel twin.
At the time this is considered an unusual engine configuration and quite a novelty: from 1905/1906 the Dutch Eysink and the Belgian Bercley also use a vertical twin in some of their models.
The twin is available with a choice of two engines, “La Touriste”, a 3¼ HP 360cc version with bore x stroke of 55×76 mm and “Modèle Grand Luxe”, a 4 HP version with a 5 mm bigger bore giving 429cc.
Prices are 900 and 1000 Francs, with an extra 175 Francs if the customer chooses for Simms-Bosch magneto ignition instead of battery/coil.
This freshly restored machine with the optional Bosch magneto ignition is a rare bird, only about a handful of Werner twins are known to have survived.
The machine is fitted with a practical free engine pulley and comfortable “Stimula” front suspension. .