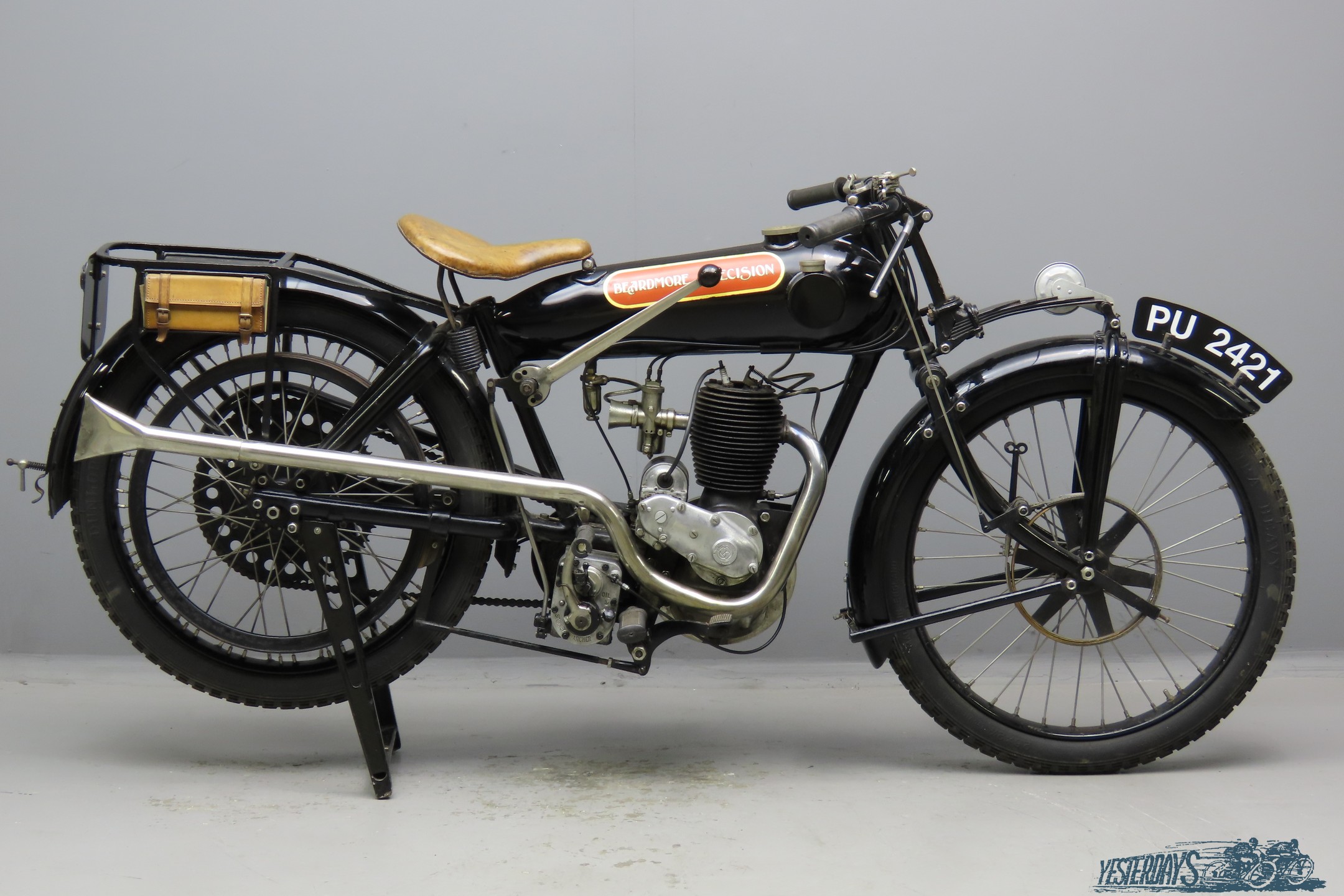 At one time Frank Baker’s Birmingham-based Precision company rivalled JAP as a supplier of engines to Britain’s motorcycle manufacturers.
The first Precision engine went on sale in 1910 but it was not until after the First World War that the firm got around to building a complete motorcycle.
It was launched as the “Beardmore Precision” because the Scottish Beardmore Engineering Group had gained control of Baker’s company.
That first machine was a two stroke with leaf sprung suspension front and rear.
Further unusual features were the external contracting band front brake, the peculiar roller lever pushbike-like handlebar controls for the front brake and decompressor and the fuel tank that was integrated with the frame.
Soon the range was expanded with side valve models, a Barr & Stroud sleeve valve model and OHV and OHC works racers.
The rear suspension disappeared at this point. Although production models gained an enviable reputation in the trials events of their day, the racers faired disastrously at the 1924 Isle of Man TT, the debacle prompting Beardmore to close the ailing firm.

The Barr & Stroud Sleeve valve engine was put on the market in 1921 and within a few years it was used by a dozen or so manufacturers, including Beardmore-Precision, Omega, New Garrard, Rex-Acme and Sparkbrook. In the course of 1924 a 500cc single and 998cc V-twin were brought out and this twin was even built in by George Brough in one of his Superior models.
The engine has a sleeve with ports that is interposed between a conventional piston and its cylinder.
It is caused to slide up and down inside the cylinder and at the same time to rotate slightly about its axis.
This rotating motion enables the single sleeve to control both the inlet and exhaust phases of the four stroke cycle.
The external-flywheel engine is very silent, requires little maintenance and has a remarkably clean exterior.
The cylinder and crankcase are made in one piece and the complete crankshaft assembly with connecting rod and piston can be removed from below, without taking the engine out of the frame. Kenn Hallworth described the working of the B&S engine in detail in an excellent article in Old Bike Quarterly, issue 30.
During the mid-twenties the motorcycle trade encountered difficult times and cost had to be cut.
The B&S-engined models had always been relatively expensive because they were made with high precision and in modest numbers so they were the first to be withdrawn from the catalogues. Engine manufacture ceased around 1925 and it is believed less than 2,000 were made.
PU 2421 was first registered on March 27, 1924 in Essex.
It was then equipped with a Precision engine. In 1992 it was bought in auction as a restauration project by a vintage specialist who restored it and replaced the engine with the current Barr & Stroud example.
It surely is a rare bird, according to the VMCC marque specialist for Beardmore only two complete Beardmore Barr & Strouds exist, this one and a machine sold by Bonhams in April 2017.
This attractive and well-restored machine comes with Bosch magneto and Sturmey-Archer gearbox and is an excellent runner.