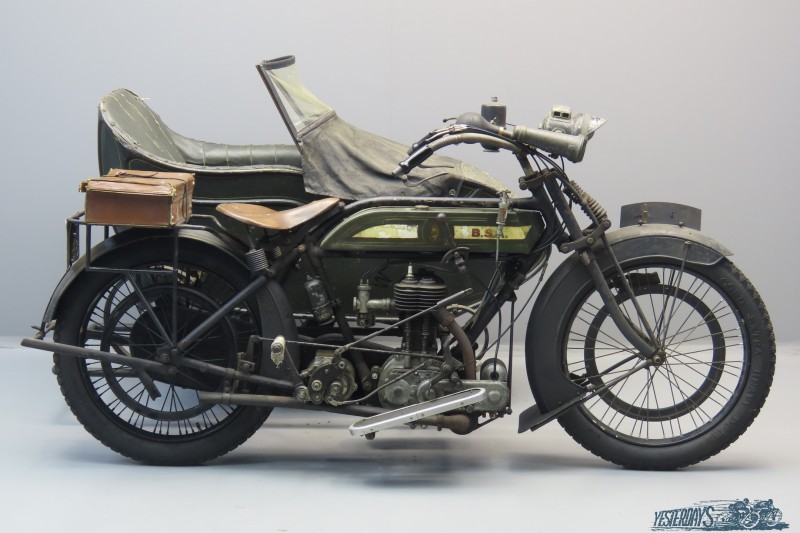 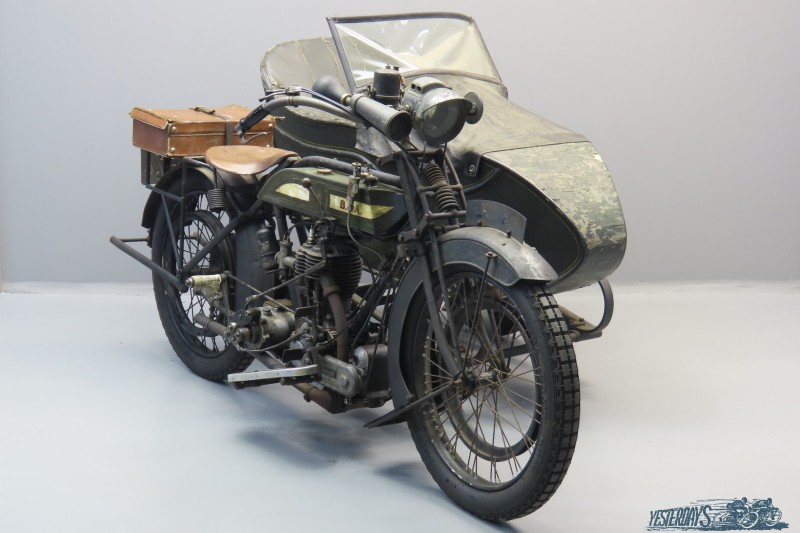 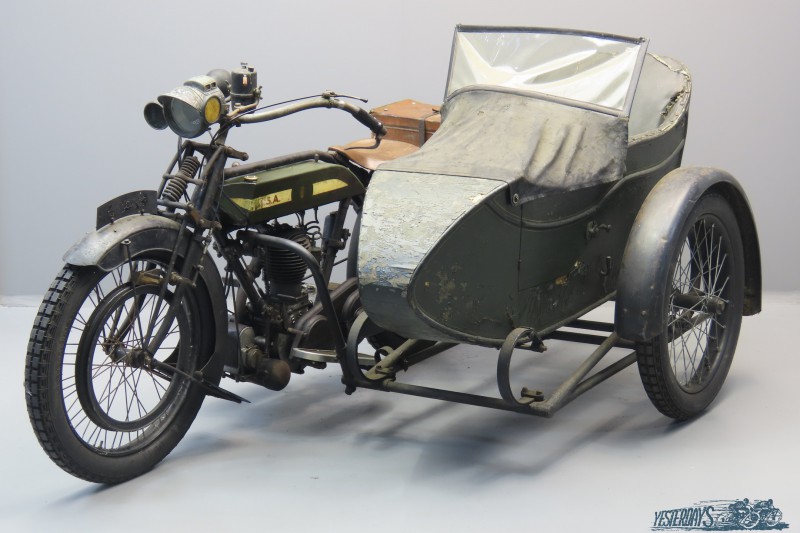 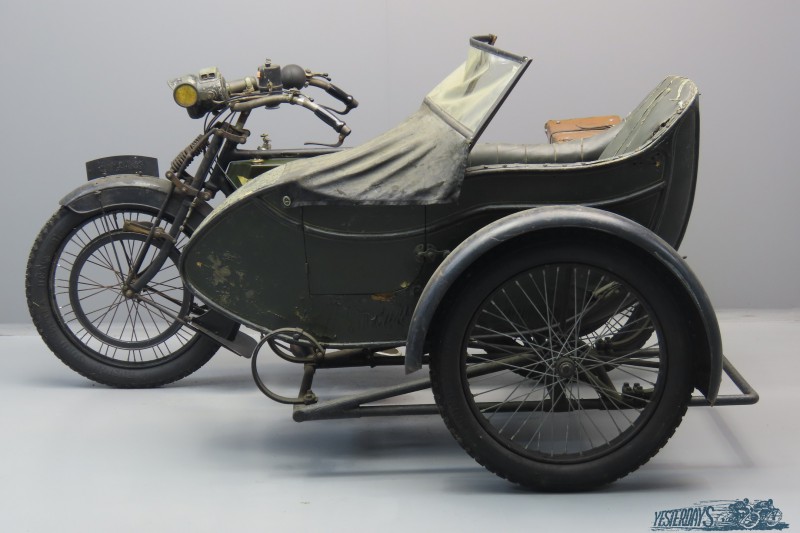 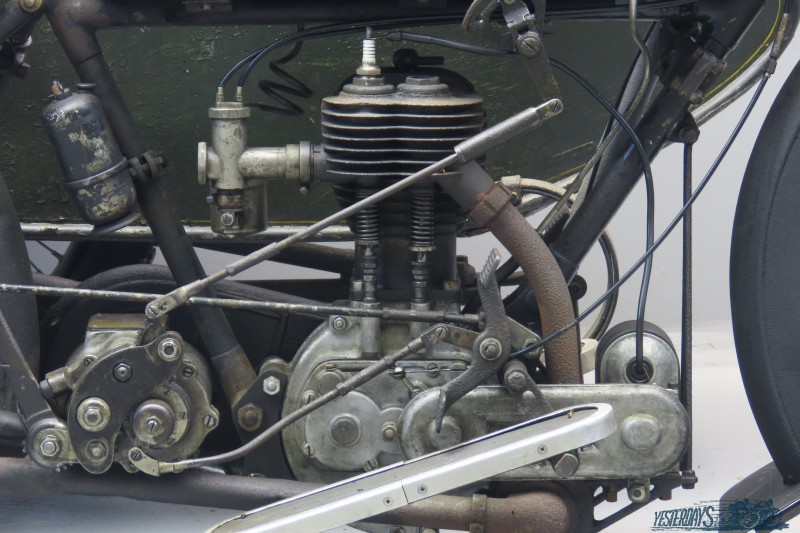 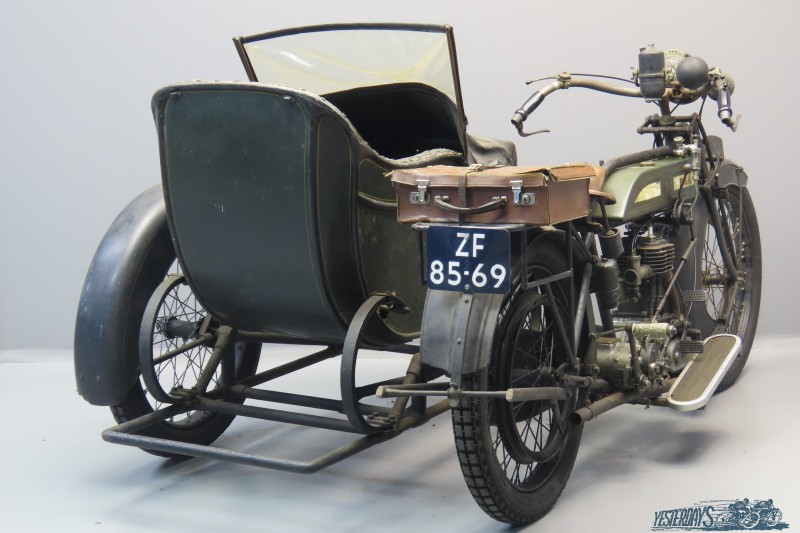 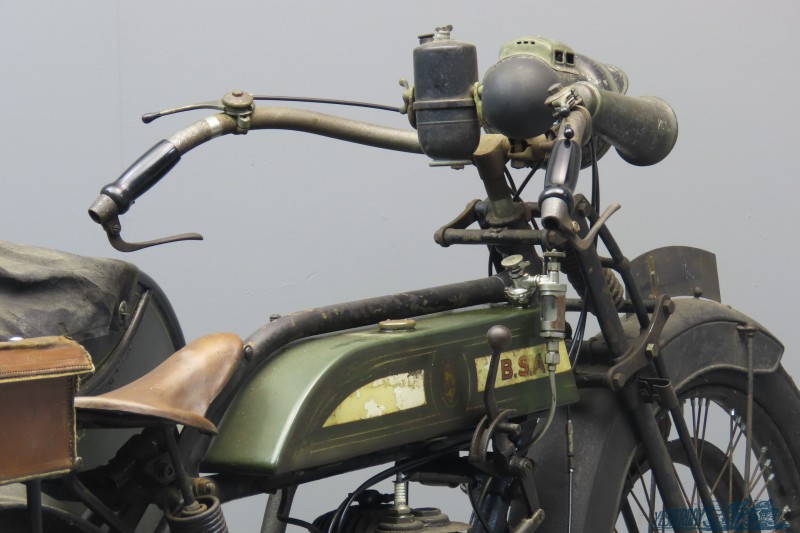 BSA entered the motor cycle market with a sturdy 3½ HP belt driven single geared machine, that was displayed at the 1910 Olympia Show. It was constructed almost entirely from BSA- made components and was produced from the company’s Redditch factory. Within six months from their launching, BSAs were selling well. The machines were easily distinguishable among rival makes by their gold-lined green tanks with cream side panels. For 1914 there was a choice between the 85x88mm 3½ HP model and the 85x98mm 4 HP model. This latter machine was offered as being especially suitable for sidecar work. It also had a newly developed three speed BSA gearbox with foot controlled clutch. Both models could be had with all-chain drive with encased chains as model “H ”or with chain-cum-belt transmission as model “K”. The model H combination we present here is not shiny or newly-restored, but comes as a real time-machine with its original 1914 finish. The tank top green has been touched up a bit, and the saddle cover and footboard rubbers and rims have been renewed some time ago. From her history we know not much: she was up for sale at a 1990s Veterama Autojumble in Germany and was subsequently sold to an American collector. In 2016 the combination was bought by a Dutch collector, and after that the machine got a good technical check-up: the magneto was rewound, new valves, guides, tappets and piston were fitted and the H got a set of new tyres. The gearbox was checked and proved to be in good condition. The result was a reliable and well-running veteran combination, that is also practical because of its trouble-free all enclosed chains and 3-speed gearbox, kick starter and clutch. Many veterans do not have these features and are more difficult to ride. The sidecar has its original upholstery and comes with screen.
In the autumn of 1914 the 1915 model was introduced; this machine is late-1914 and has the 1915 improvements such as a dummy-rim front brake instead of the impractical stirrup-type, and handlebar control of the magneto. Accessories include Powell & Hanmer acetylene lighting system, suitcase and Lucas Bulb horn. Veteran machines in near-original condition are rare; this specimen comes with Pioneer Certificate and current Dutch registration.