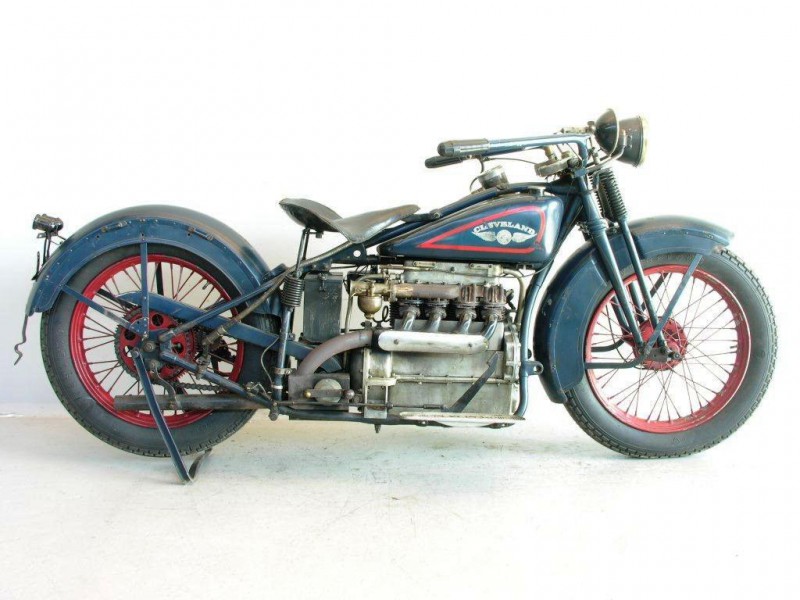 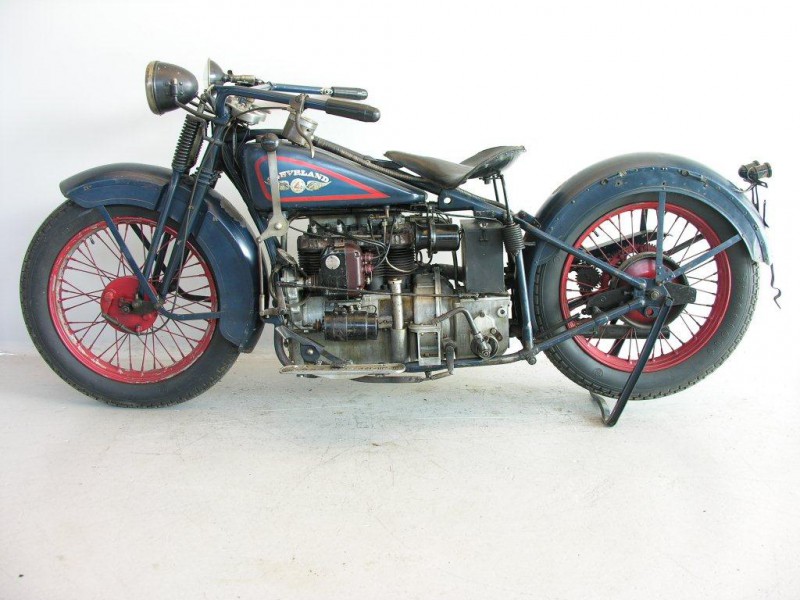 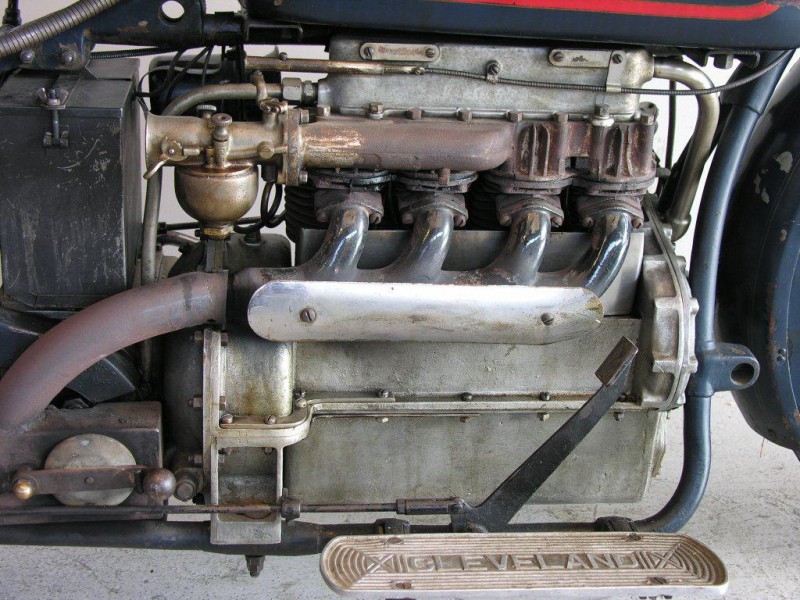 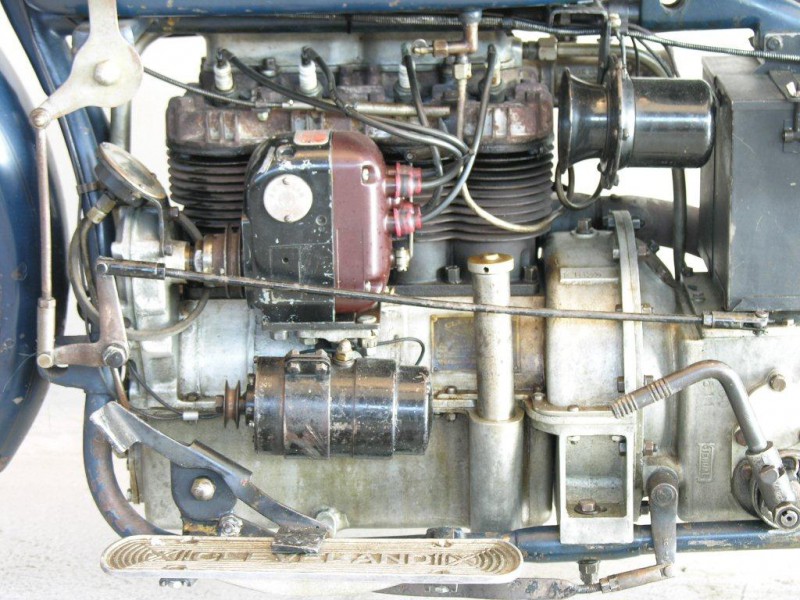 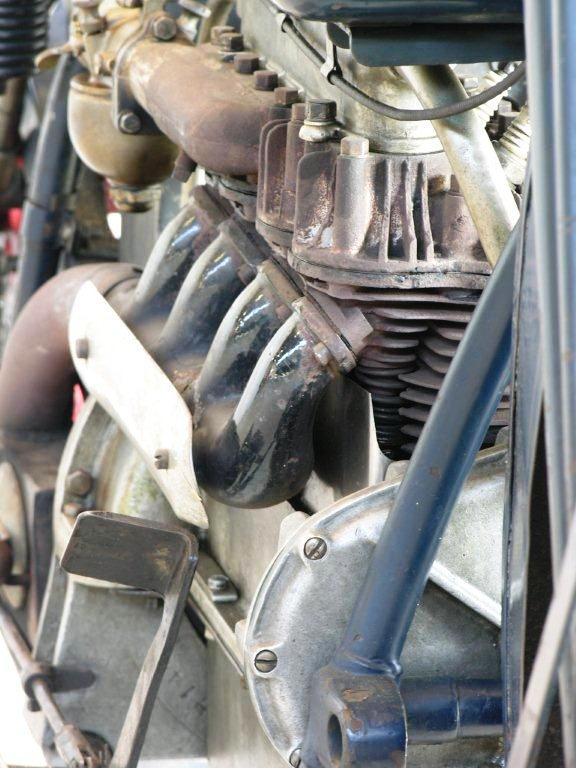 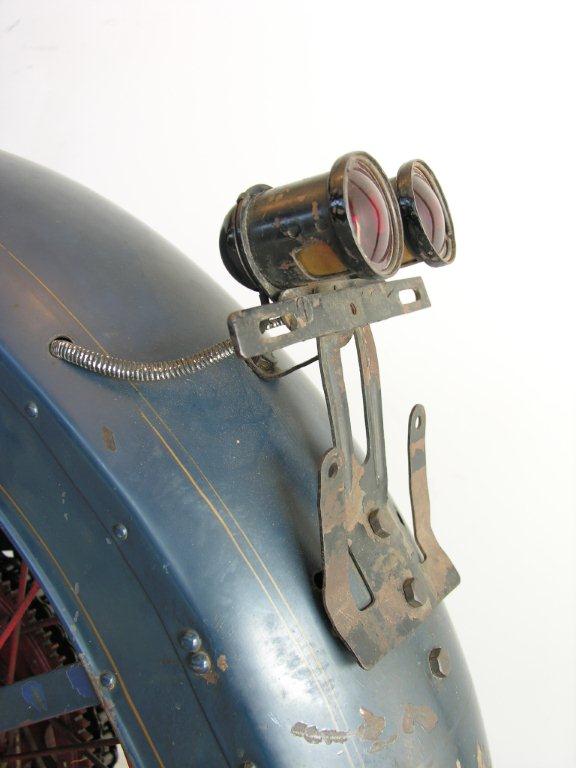 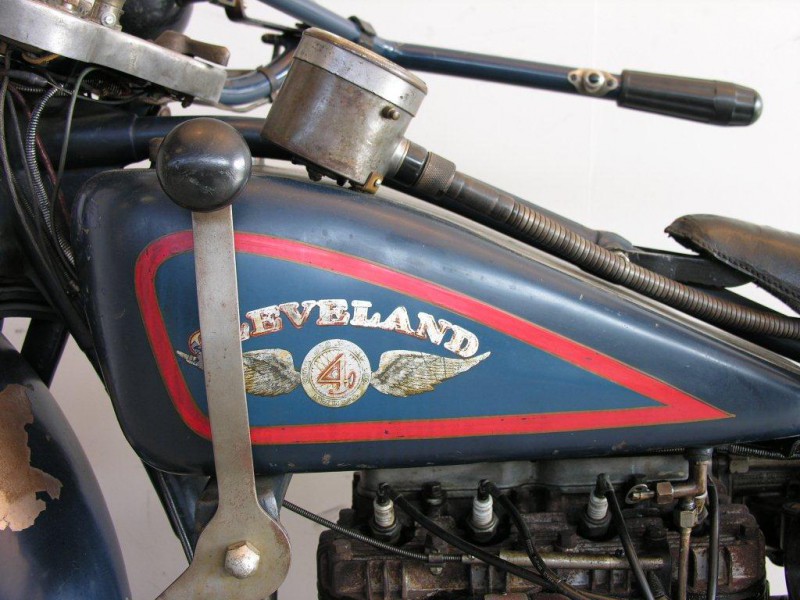 The CLEVELAND Motorcycle Manufacturing Company of Cleveland, Ohio manufactured for many years a very handsome lightweight single.
When the first CLEVELAND  came on the market in 1915, this little lightweight captured the hearts of many motorcycle enthusiasts.
It turned out to be very reliable and had remarkable performance.
In 1925 sales of this lightweight were flourishing. HENDERSON and ACE  were selling in good numbers and the CLEVELAND Company decided to bring out an entirely new CLEVELAND 4.
The engine was a 37” (600cc) with dry sump lubrication and a three bearing crankshaft.
Several hundreds of these machines were sold.
However,  performance turned out to be unsatisfactory.
In 1926 an entirely new four cylinder design was launched:  the CLEVELAND “4-45” , four cylinders, 45” (750cc) .
The gearbox was of an entirely new design and the internals could be removed  from the side, without removing the engine from the frame as would be necessary in the HENDERSON and ACE.
The road holding was superb and this gave a healthy upswing in sales.
Late 1926 a new super sports  model of the “4-45” appeared.
The top speed was now up to 75 miles an hour.
In August 1927 a new model was presented, the “4-61”  4 cylinders, 61” (1000cc).
This “4-61” was capable of doing 90 miles an hour.
HENDERSONS though, could do 95 to 100 miles an hour because of their 80 cubic inches (1340cc).
At the New York National Motorcycle Show for 1929 the new 4-61 was announced and was called the “Tornado” .
This Tornado would do 100mph. !  Unfortunately,
1929 was the year of the stock market crash which left the entire world in a terrible depression so the demand for luxury motorcycles was on a low point..
Just by that time, the CLEVELAND Motorcycle Company had a new and much better CLEVELAND Four in production and  a small quantity of these new machines was being manufactured.
This was the new CLEVELAND “Century” model of 1000cc (61”) 3-speed.
It had higher compression, polished and larger intake ports, a special exhaust system with large expansion chamber and a stronger triple spring front fork.
Each of these Century models was tested in excess of 100mph.

This CLEVELAND Century 61” 1000cc was one of the last CLEVELANDS to roll from the CLEVELAND Motorcycle Company floor before the final close down.
This is a very fine and very good running, extremely rare and original-condition motorcycle with all original paint and bright work.
It is complete with electric lighting, Corbin Speedo, American Bosch magneto and oil pressure gauge.