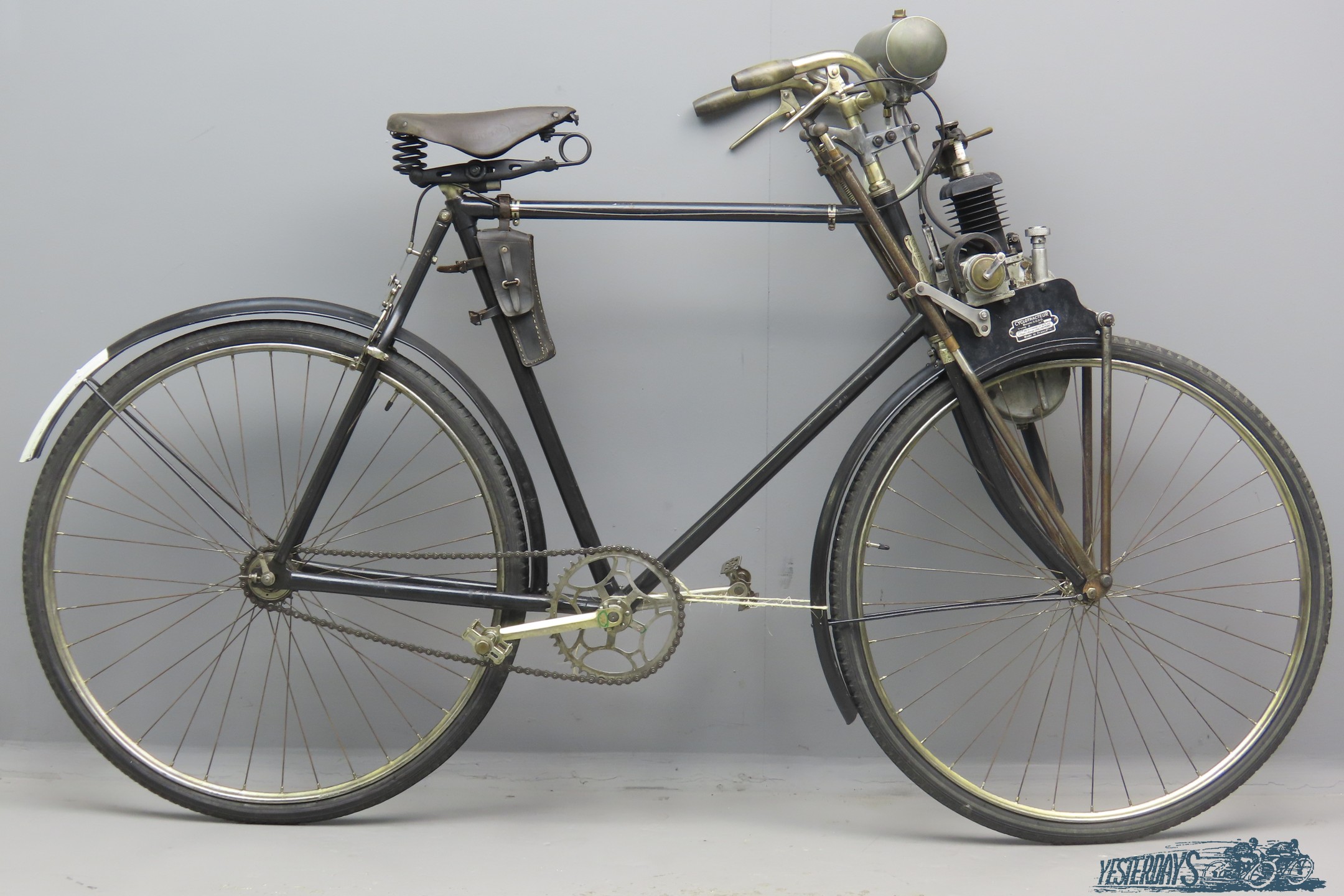 This little engine, patented in 1913 by Raymond gearges Aimé Mauclaire was considered quite innovative when it was first displayed as the “Mototracteur” at the Paris Show in 1913.
The 45×55 engine displaced 87cc and made 2,200 rpm.
The carburettor was automatic and reduction in speed was effected by using the decompressor lever on the handlebars.
The Mototracteur was received well by the press but the onset of the war prevented large scale production.
In 1919 production was taken up by the “Compagnie Française des Automobiles de Place”.
The design was changed a bit though and that was reflected in the new name “Cyclotracteur”.
The bore was enlarged to 50mm giving a capacity of 110cc and a new carburettor was added that permitted the regulation of the air that was admitted.
The engine, weighing 13 kg, got vertical cooling fins on the cylinder head.
Inside the timing chest is a train of gears that drives the magneto and the oil pump.
The side exhaust valve is mechanically operated, the automatic inlet valve is situated directly under the carburettor.
The drive is transmitted through the front wheel by friction roller.
Two types of roller were available, a ribbed cast iron one for dry weather and one covered with emery for when it was wet.
A small tram handle behind the headstock raises and lowers the engine unit on telescopic tubes.
Production of this Solex ancestor continued till around 1923.
In a description that was published in 1921 in The Motor Cycle we read “A single-cylinder engine of 50×55 mm bore and stroke is suspended in a V-shaped tubular frame, the converging ends are fitted into the front wheel hub spindle, whilst the long arm of the frame is attached to the head of the cycle frame.
An automatic inlet valve is used, while the exhaust is mechanically operated.
Petrol sufficient for a fifty-mile run is carried in a circular clipped to the handle-bars, adequate lubrication being effected by a small gear oil pump in the crank case sump. (…)
The attachement can be fitted to any bicycle and is a distinctive neat device.
Sole distribution in the british Empire is in the hands of the British Motor Cab C. Ltd. 1 and 3 Brixton Road, London S.W.9.”
For Cyclotracteur details & road test see Philip Tooth’s article in “The Classic Motorcycle” of June, 1990.

This Cyclotaracteur is fixed to a period Terrot bicycle.
The bicycle is in good authentic condition and the engine has been checked: a new exhaust valve has been fitted and ground in.
The Déesse magneto # 510537 ND-1 has been rewound.
All in all a fine example of this early form of motorized bicycling.