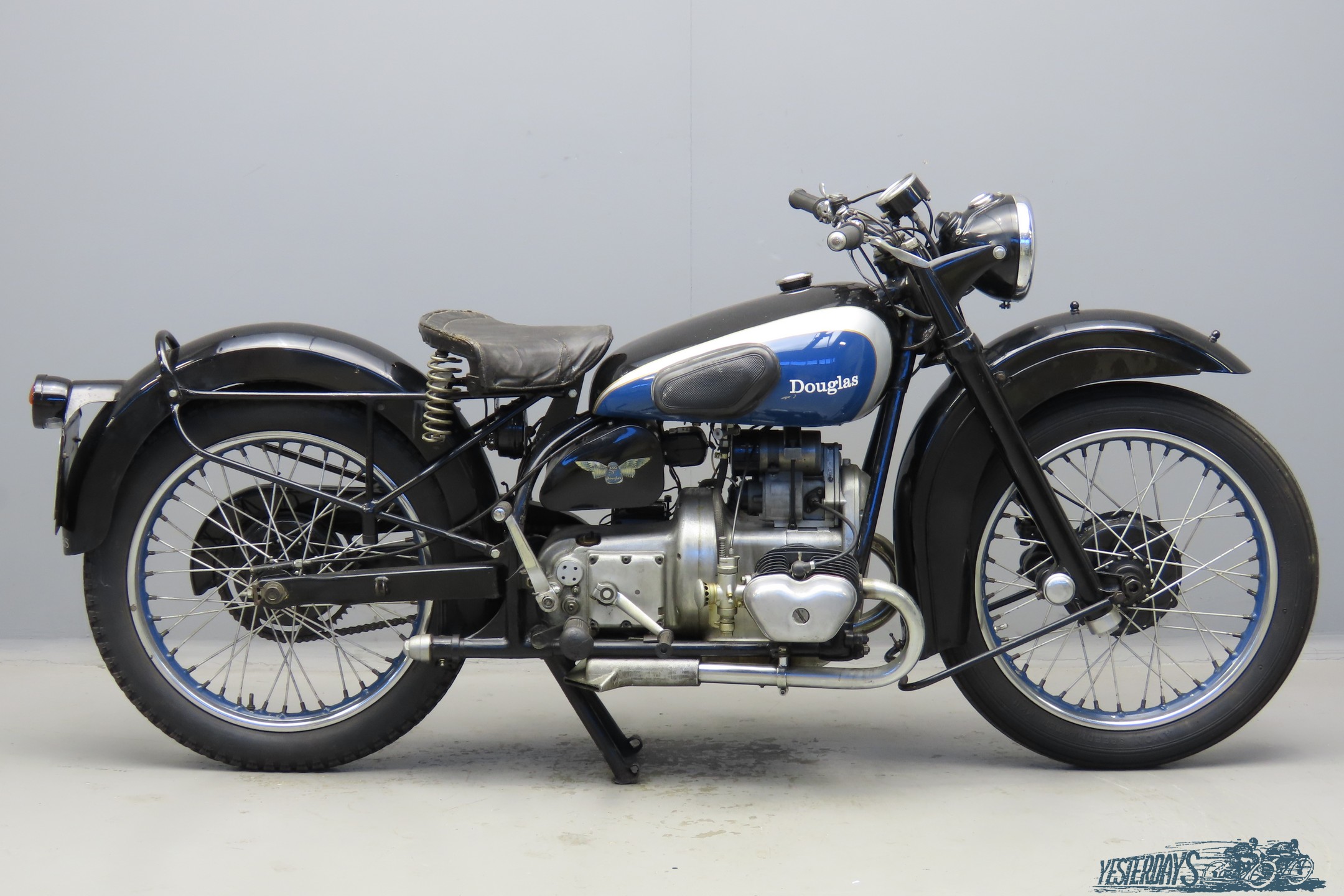 Douglas 1948 T 35 Mk III 348cc ohv transverse twin frame & engine # T35/S/5820/3
Although the first details of an entirely new Douglas twin were already announced during September 1945, it was not until July the following year that pre-production machines were available for a road test by the motorcycle press. “Torrens” , pen name of Arthur Bourne , editor of The Motor Cycle, took the new ohv twin for a spin and wrote favourably about it in the magazine’s July 11, 1946 issue:
“What impressed me right from the outset was the excellence of the riding position. It is one of the best ever and of a type to suit just about everyone. The handlebars fitted were of the almost straight type, with the ends exactly at the right angle for comfort and full control (….). It does not need me to extoll the horizontally opposed twin as an engine type. This engine would rev and would pull. Changing up, with a gentle deliberate press on the pedal, was knife-into-butter. The engine-speed gearbox has an excellent gear change – better than that of any horizontal opposed transverse twin I have handled. The road steering too, was of a type to make any normal being say “Very good indeed”, but no, Douglases think it may be possible to improve the bend-swinging at medium speeds and have developed a special test rig. This is one of the things which impressed me so much. “Good”, and the steering is already good, is not good enough for them – they are going to see if they cannot do better still. Full marks!”
Innovative features of the T35 are its swinging arm rear suspension controlled by torsion bars, and leading-link Radiadraulic front fork. Its advanced running gear endowed the Douglas with excellent handling and steering characteristics, while the willing engine could nevertheless propel the ‘Duggie’ at up to 110 km/h and return 20-plus km per litre. The T35 was produced for little more than one season before being superseded by the updated Mk III in 1948. Improvements were made under supervision of Freddy Dixon and included new cylinder heads and a stronger frame. In 1949 the Mk IV was introduced with its distinctive triangular toolboxes, frame-mounted pillion footrests and un-sprung front mudguard. The machine we present here is a road-registered and well-sorted older restoration that is fitted with a Smiths speedometer.