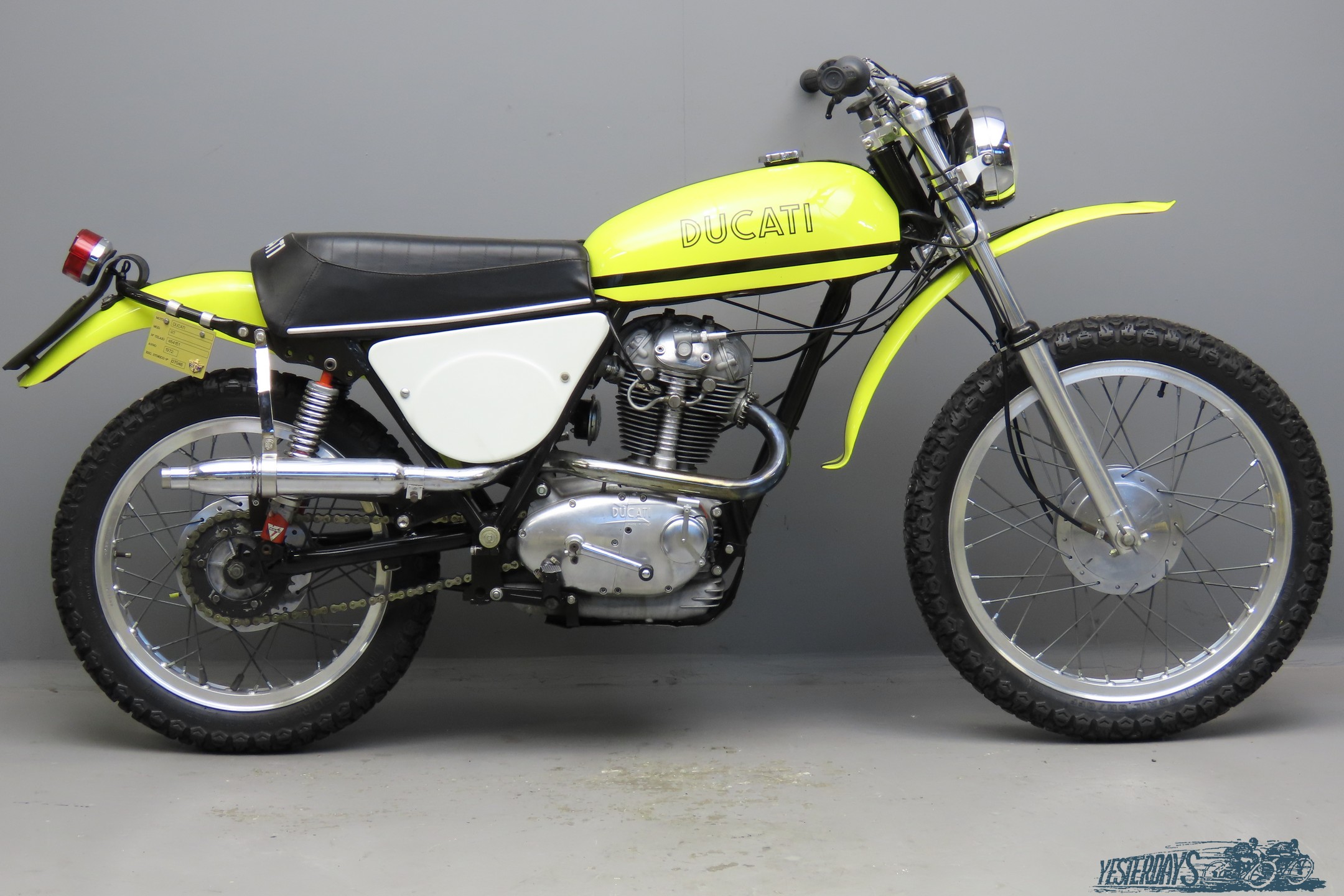 The Ducati 450 R/T (road/trail) was manufactured from 1971 to 1974.
Initially the model was produced at the request of the American importers the Berliner Motor Corporation as a pure motocross machine exclusively for the American market.
Of this type only a few hundred machines were made. The R/T was the only motocross bike to use desmodromic valves. From 1972 it was produced for the European market as a street legal on/off road machine, sometimes referred to as the 450 T/S.
The desmodromic valve control system was developed by Ducati engineer Fabio Taglioni in the 1950s.
Taglioni’s big idea was to control “valve float” at high revolutions by having the valves positively opened and closed without using conventional springs.
If left unchecked, valve float can cause a catastrophic collision between the valve and piston, a huge problem on a high-rpm performance machine.
To fight this, Taglioni designed a “Desmodromic” (from the Greek: “desmos” [controlled, linked] and “dromos” [stroke, course, track]) valve train.
Several manufacturers had experimented with this system since the early part of the twentieth century to varying success.
The best known and most successful of these was Mercedes-Benz, with their W196 straight-8 Grand Prix race cars of the fifties.
The single cylinder bevel drive OHC engine is of a vertically split unit construction and has an alloy head and alloy barrel with austenitic liner.
Ball bearings are used in the main bearings and roller bearings for the big end.
Bore and stroke are 85mm × 75mm and the compression ratio is 9.3:1. Claimed power output is 36bhp @ 6,500rpm.
A decompressor is fitted to aid starting and also as a method of stopping the engine as no ignition switch is fitted.
Fuel is delivered by a 29 mm Dell’Orto UHB carburettor and a wet sump lubrication system is employed.
Ignition was initially by flywheel magneto, but this was changed to battery and coil in 1972 and electronic ignition was fitted in 1974.
The primary drive is effected by helical gears to a multi-plate wet clutch and there’s a five-speed gearbox on board.
It is claimed that in all only around 460 machines were produced, so this R/T can be considered a rare bird.
She’s a road-registered older ( near new) restoration with speedo, rev counter and quality “Koni” rear shocks.