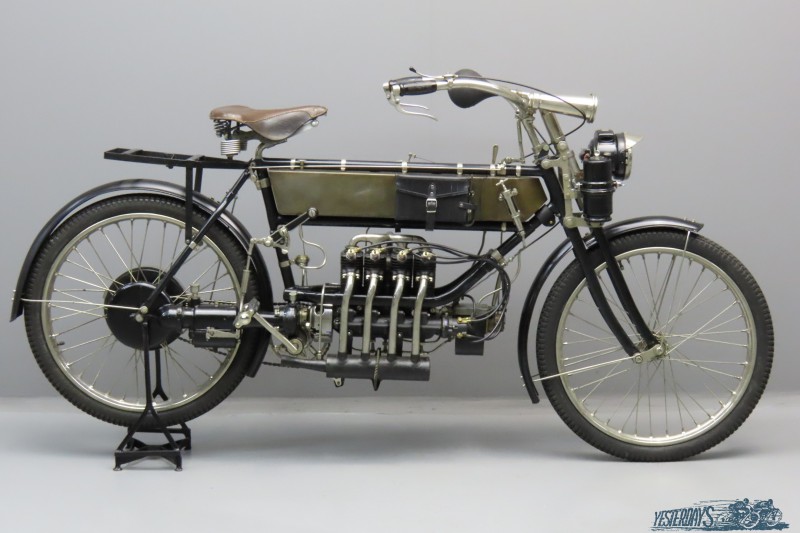 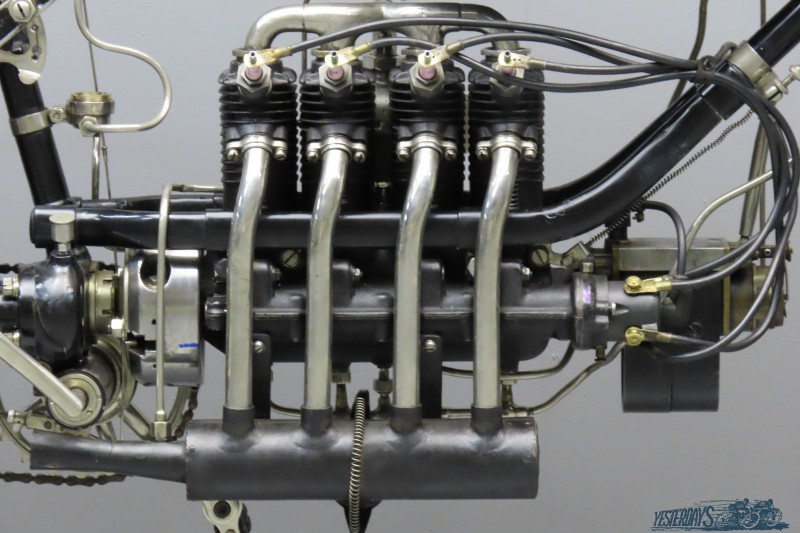 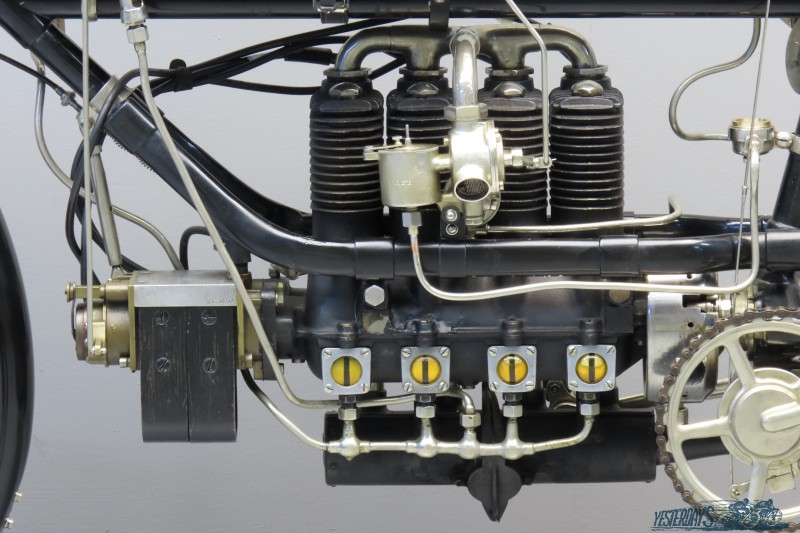 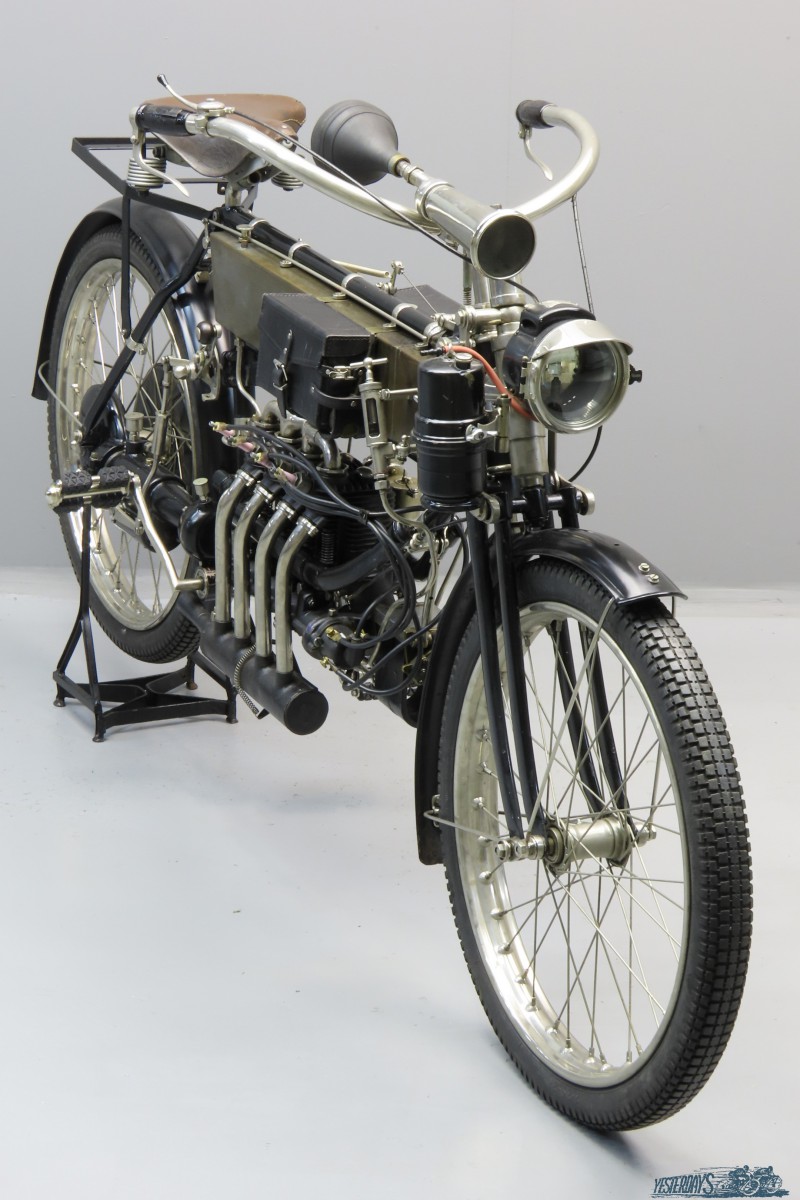 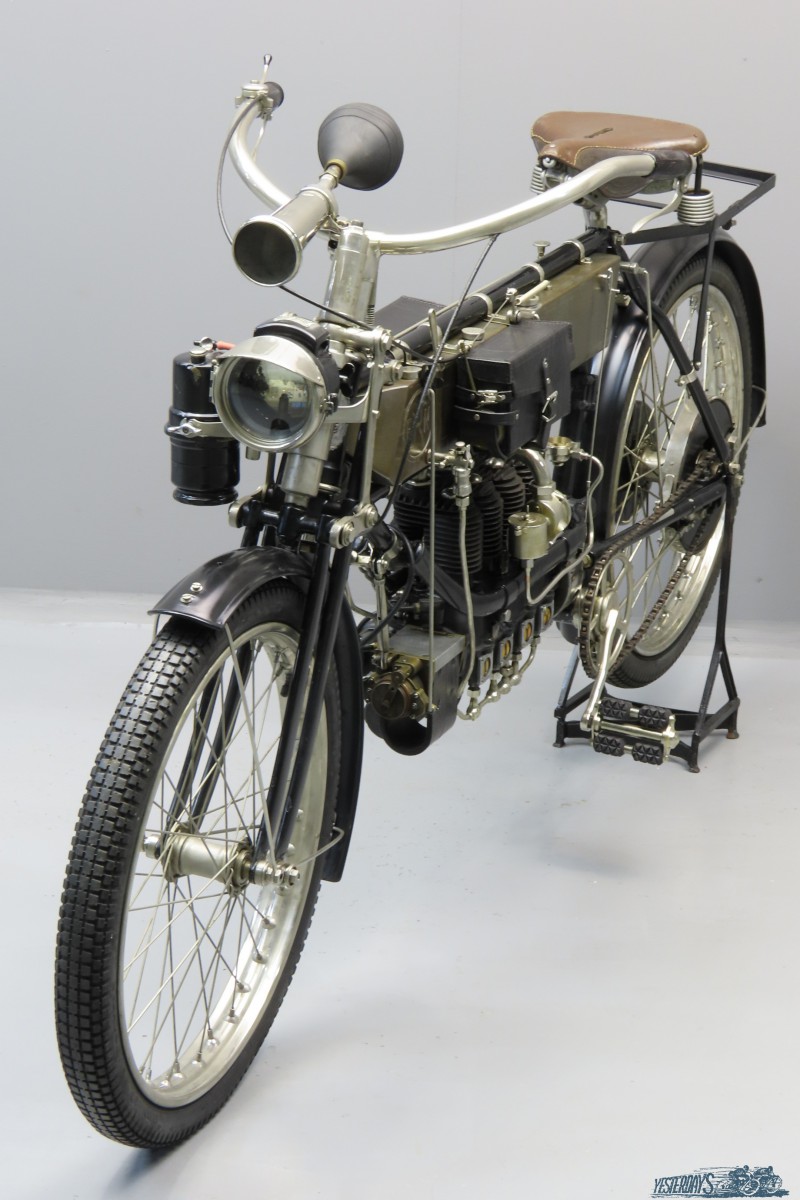 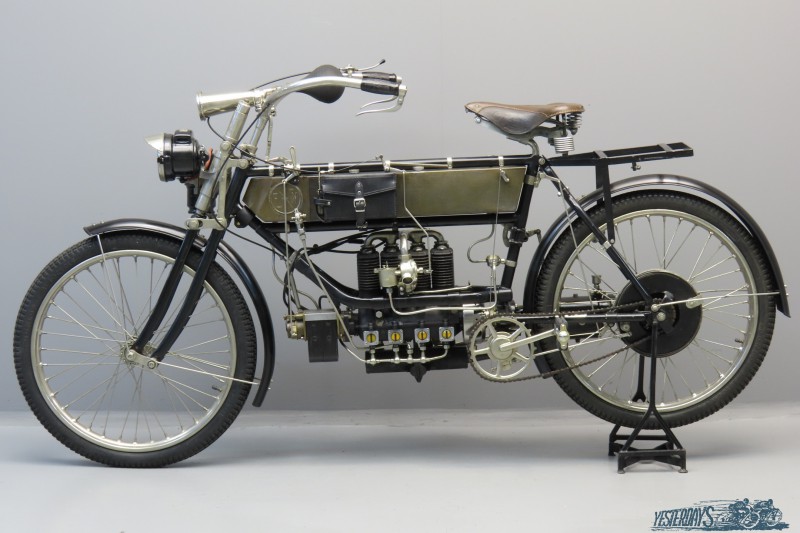 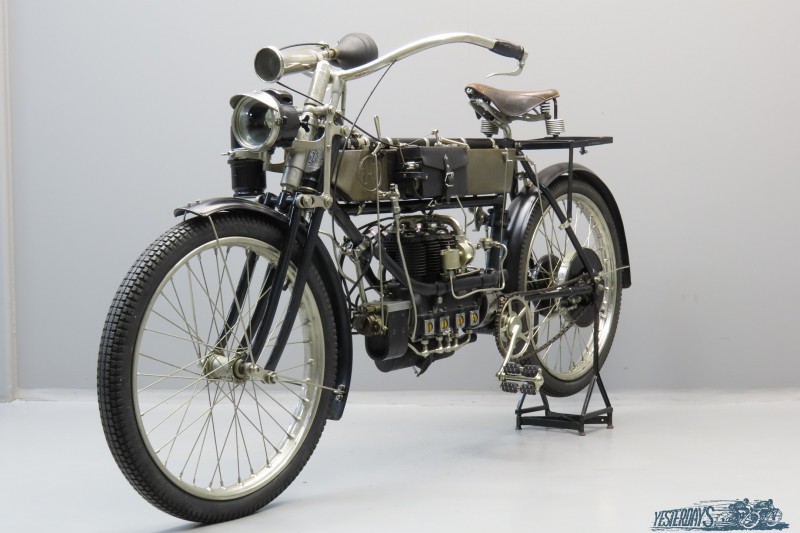 To many enthusiasts the FN four has always been one of the most appealing machines of veteran and vintage times. Its production ran from 1905 till 1926. The earliest type had a 362 cc engine with automatic overhead inlet valves and side exhaust valves. The machine was single geared and had shaft drive that was supported on ball bearings. The driveshaft ran inside the right-hand frame member to a bevel gear on the rear axle and the top speed was about 60 km/hour. Two brakes (drum and rim-type) both operated on the rear wheel. The FN four was an immediate success and found customers all over the world; FN sold its machines in more than 40 countries. It found many customers in the U.S.A. and made Americans interested in the four cylinder concept: Percy Pierce purchased a 1908 model on one of his trips to Europe and the FN became a point of reference for the first Pierce Four in 1909.
For 1910 the engine was redesigned; new cylinders had twelve fins rather than eleven, the bore was increased to 52.7 mm to give 498cc, and the exhaust pipes were now attached with two bolts to a flange in contrast to the earlier screw-on pattern. The spark plugs were moved from the top of the cylinders to the right side between the valves. The inlet manifold was substantially revised to site the new carburettor at the left of the engine between cylinders two and three. A nice touch was a fuel filter mounted on the seat tube of the frame. There was also a new oiling system. The only major change to the cycle parts was a long rebound spring on top of the front fork. The FN four was very popular in Britain but the lack of a gearbox was felt by a number of riders. Sydney Horstmann, who ran a garage in Bath, Somerset, saw a business opportunity here and he designed a two-speed gearbox that could be fitted as an aftermarket accessory. The gearbox was contained within the drive-shaft housing and many owners had one fitted. When FN brought out its 1913 model it was equipped with a 2 speed gearbox of very similar layout.
The machine we present is fitted with such a Horstmann gearbox and is a high-quality older restoration. She was originally sold in Britain, was restored, spent some time in South Africa and subsequently came back to Britain were it was bought some 30 years ago by the former owner.  There’s a set of photos available from 1992 showing the machine with the black tank finish. The Four has been proudly displayed for some thirty years so if the new owner plans to ride it some adjustment will be advisable. Accessories fitted are Lucas “King’s Own” acetylene headlamp, generator and bulb horn.