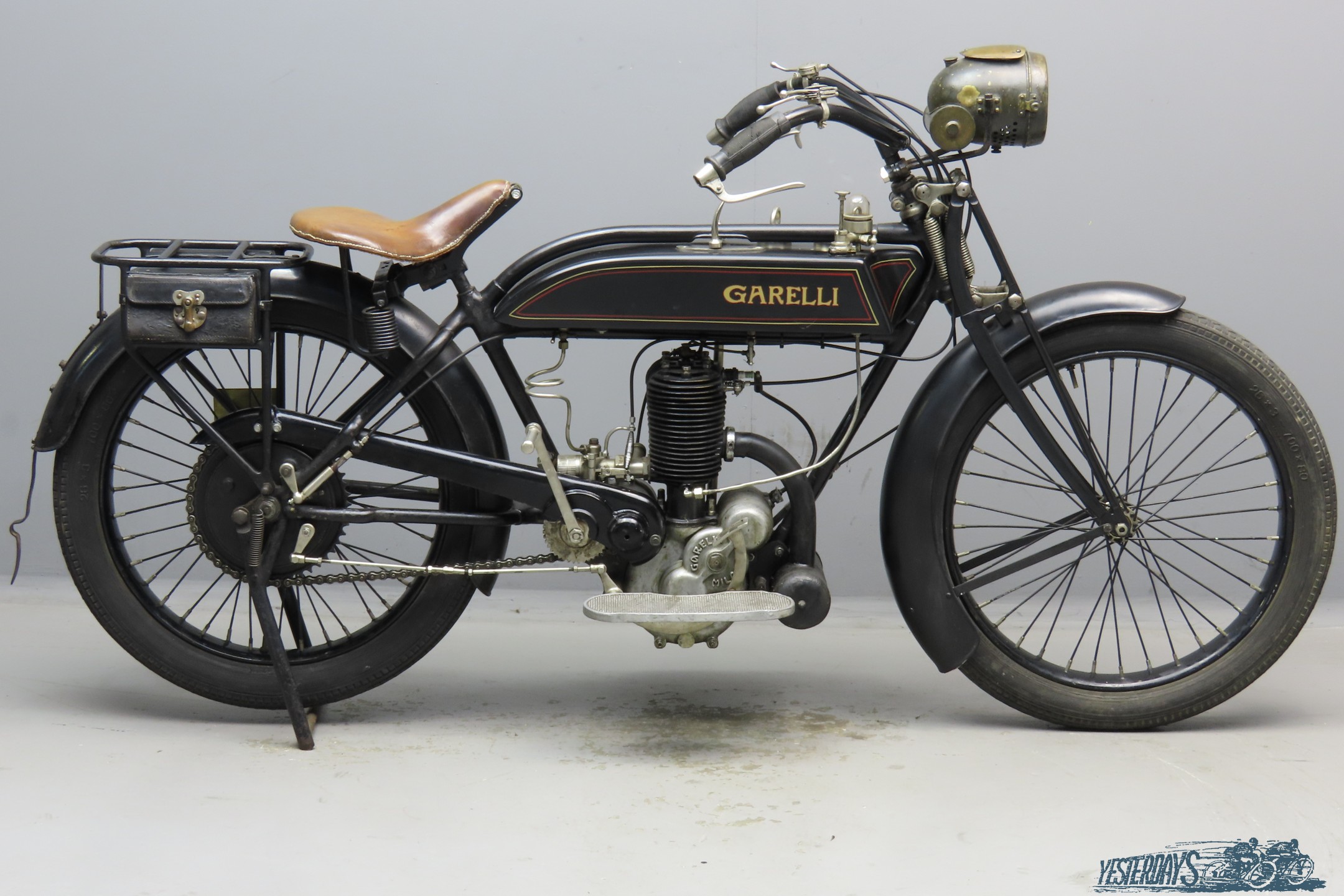 Adalberto Garelli was born at Turin in 1886. In 1908 he qualified as an engineer and got a commission at the Fiat factory to design a practical two stroke engine.  However, the company was not very enthusiastic about the concept and in 1911 Garelli left to further develop his idea of a two-stroke split-single for more efficient scavenging, consisting of two parallel cylinders cast in a single block. Both pistons with 175c displacement each were connected by a long gudgeon pin to a single conrod. The engine had a total capacity of 350cc. Garelli worked for other motorcycle manufacturers  from 1914 to 1918 during which time he won a competition organized by the Italian Army to design a motorcycle for which he used his 350cc split-single engine. In 1919 Adalberto started his own company and constructed a 350cc split-single motorcycle with bore x stroke dimensions of 52×82 mm which set a long distance record from Milan to Naples. This was the beginning of a very successful period for the make.  Many famous Italian racers such as Ernesto Gnesa, Tazio Nuvolari and Achille Varzi began their racing careers on Garelli bikes. The advantage of the split-single construction was that the incoming mixture and the outgoing exhaust gases were completely separated. This resulted in more power and less petrol consumption. Racing versions of the engine could deliver 20hp @ 4500 rpm. During the nineteen twenties hundreds of records were broken by Garelli racers. Highlight was 1926, when no less than 138 world records were broken.

After 1926 Garelli began to diversify into other areas of manufacturing and motorcycle production gradually declined. From 1928 the factory began turning out, among other products, compressed air starters for aero and marine engines, compressors for military aircraft and generators for tanks. It would turn out to be a shrewd move. The last Garelli motorcycle made pre-war left the factory in 1935.

This “Turismo” is an older restoration in good condition. The machine comes with acetylene lighting system with ingenious built-in generator. The clutch can be operated by a foot pedal and a handlebar lever and the carburetor is a Zenith device. There are two brakes on the rear wheel and the magneto is tucked away safely in an aluminum housing in front of the cylinders. There’s a two speed gearbox on board that is operated via a rod and “tram handle” lever on top of the petrol tank.