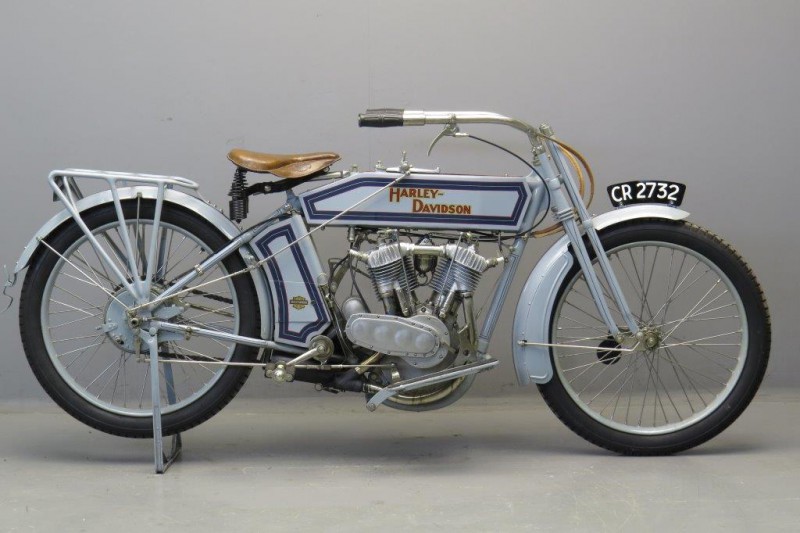 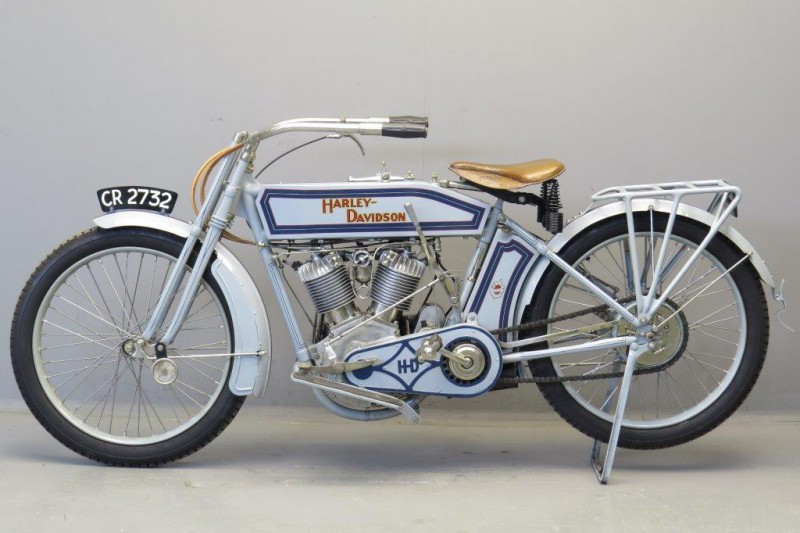 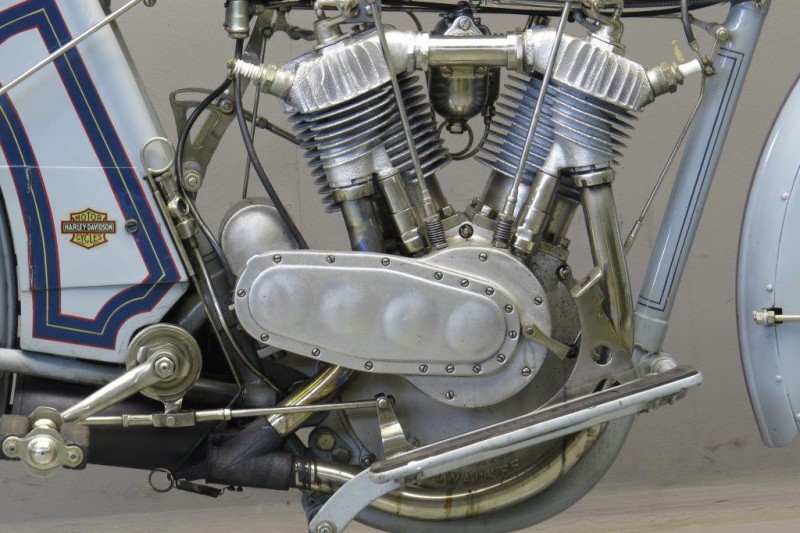 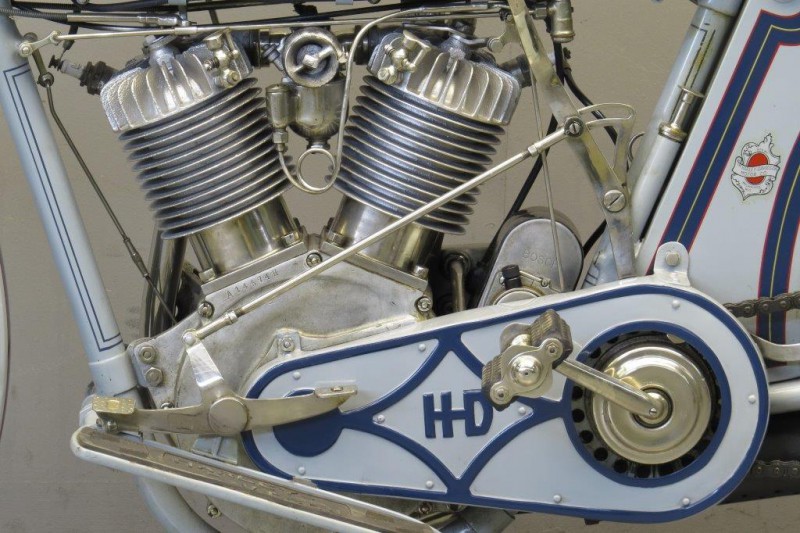 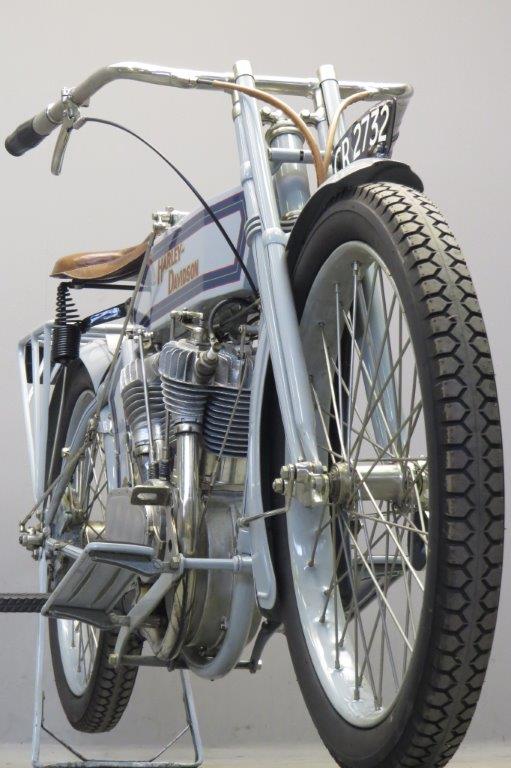 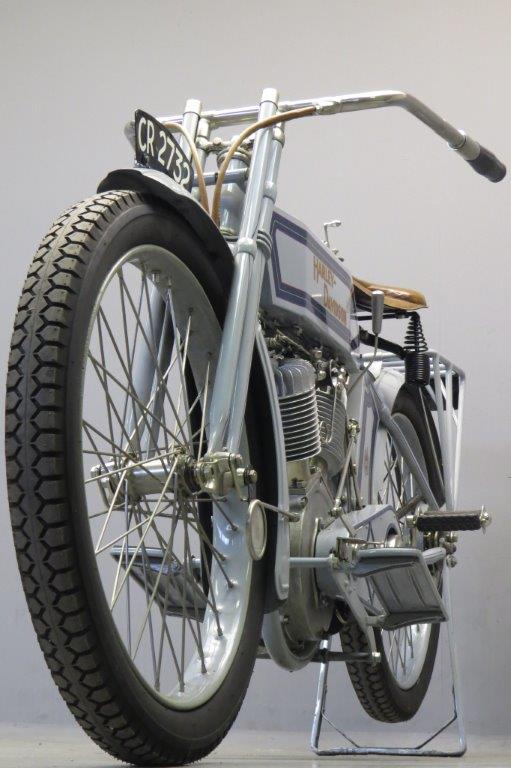 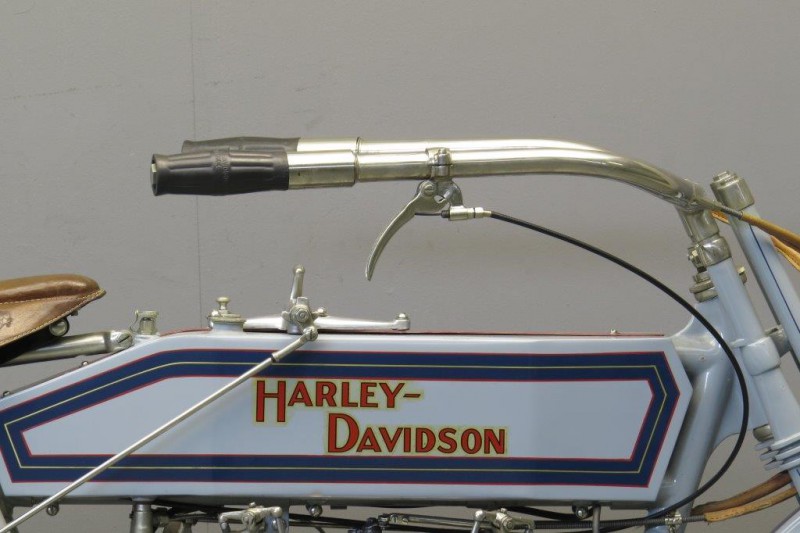 The first  V-twin Harley prototype  was  displayed at the Chicago Motorcycle Show in February 1907, but it wasn’t until 1909 that the first twins were for sale; officially they were still considered  prototypes and only 27 were sold.
The engine had a capacity of 880 cc and had atmospheric intake valves.
The standard colour of these machines was Renault Gray with carmine striping.
The engines were not as good as the company expected so for 1910 no twins were offered and further development work was done.
In 1911 a new engine was presented with 811 cc capacity and IOE configuration.
This proved to be a sound design and it was developed further year after year.
In 1912 a bigger, 989 cc engine was an option and in 1913 the 989 cc engine became standard.
In the  1914 catalogue five models were offered,  three 5 HP singles and two 8 HP twins.
Top of the range, at a price of $ 285, was the “10F” equipped with two speed gear in the rear hub.
Not mentioned  in the motorcycle catalogue by the way was the model G, a delivery van also equipped with 2 speed hub.
As with every new model year,  the factory had improved their machines in a number of ways.
The  most important  new feature for 1914 was of course the 2 speed hub, which made the machine very suitable for sidecar use.
The company had bought in 2,500 sidecars from Rogers in Chicago so that customers could order a machine with factory-fitted sidecar, which cost an added $85.
Other very practical new features were the step starter and the improved  internal expanding band rear brake.
That year the factory sold  some 16,000 motorcycles, almost half of them being 10Fs.

This rare machine has an interesting history.
It  spent the whole of its life in Britain.
It was sold in 1914  as a sidecar combination   by the HD agents in Bournemouth and registered in Southampton.
It was commandeered from the original owner by the Navy  during the Great War and painted khaki over the original paint finish.
After the hostilities it was returned to the original owner who used it for a short period and then the machine was laid up.
It was later bought by a very early veteran motorcycle enthusiast in Hampshire who took part  with the then unrestored combination in the 1947 Pioneer Run, wrongly entering it as a 1912 HD.
The machine  was sparingly ridden in the 1950s and then laid  up in 1959.
It was stored for some 25 years under rather bad condition, so when it got a new owner in the 80s a full restoration was necessary.
Since the completion of the restoration the machine hasn’t seen much use: it turned out the keen owner had been a bit optimistic about his own length in relation to the machine’s saddle height: he could not reach the floor when sitting on his pride and joy…