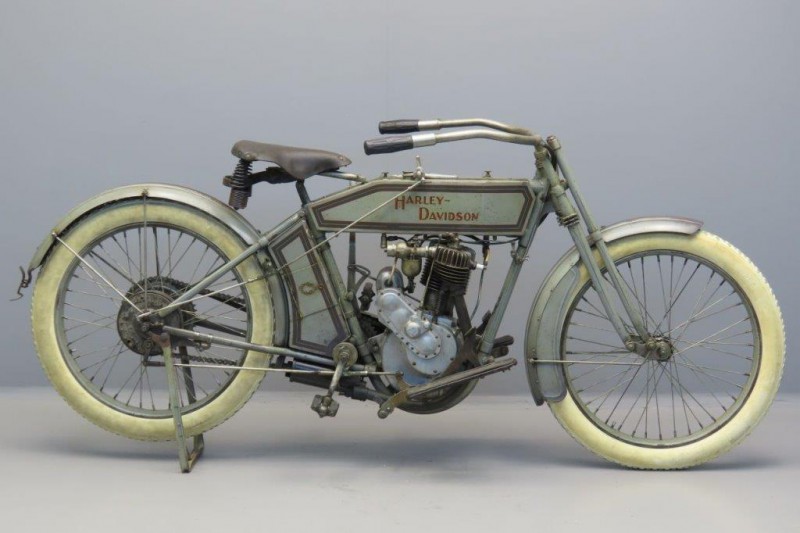 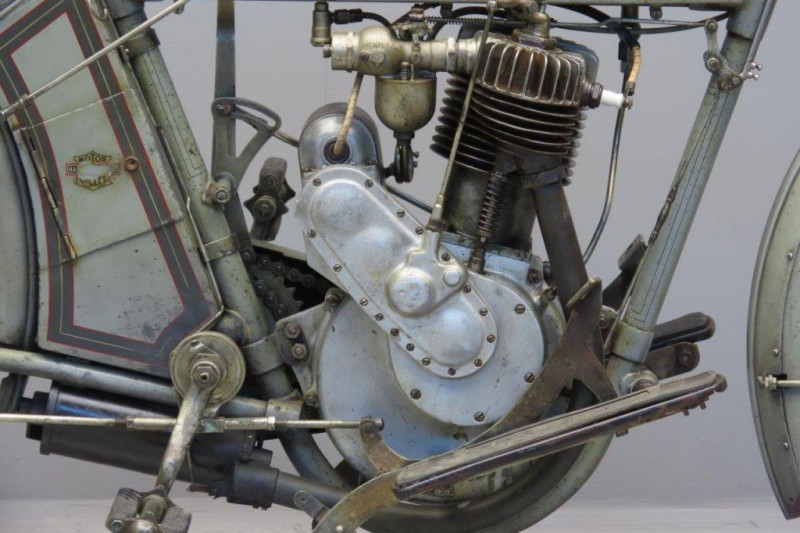 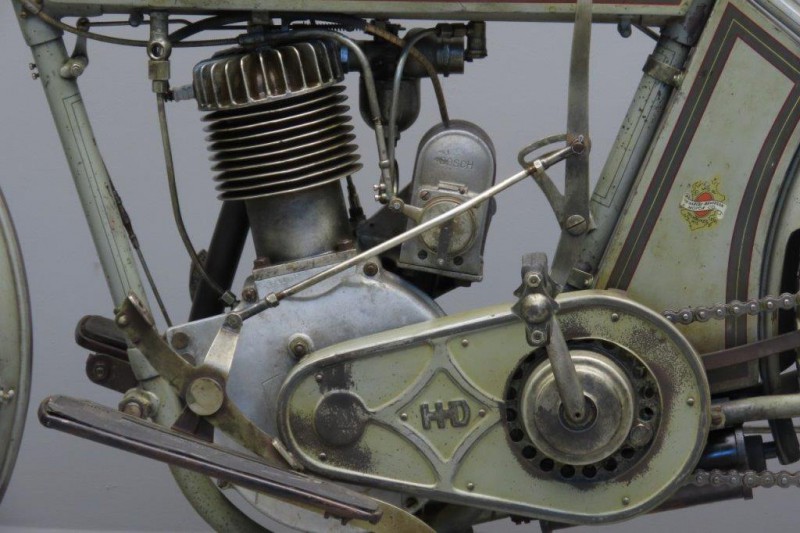 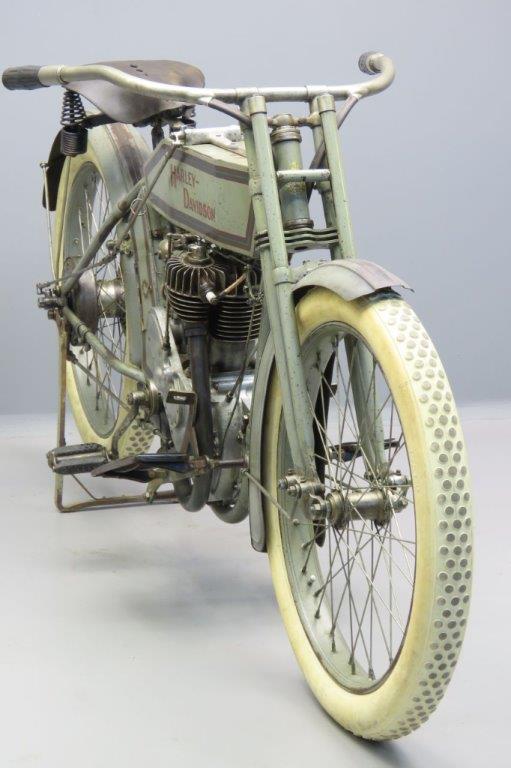 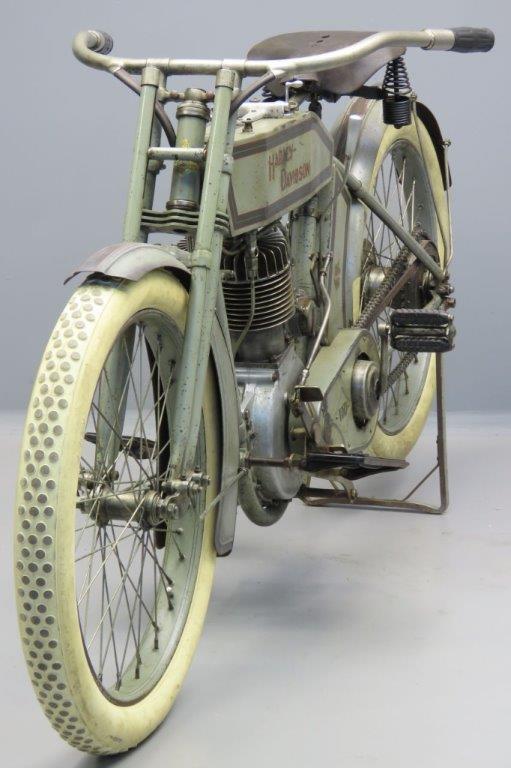 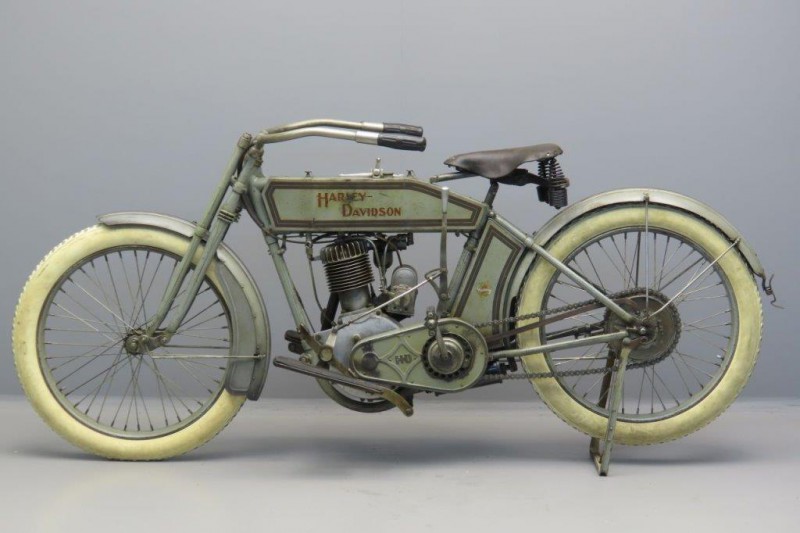 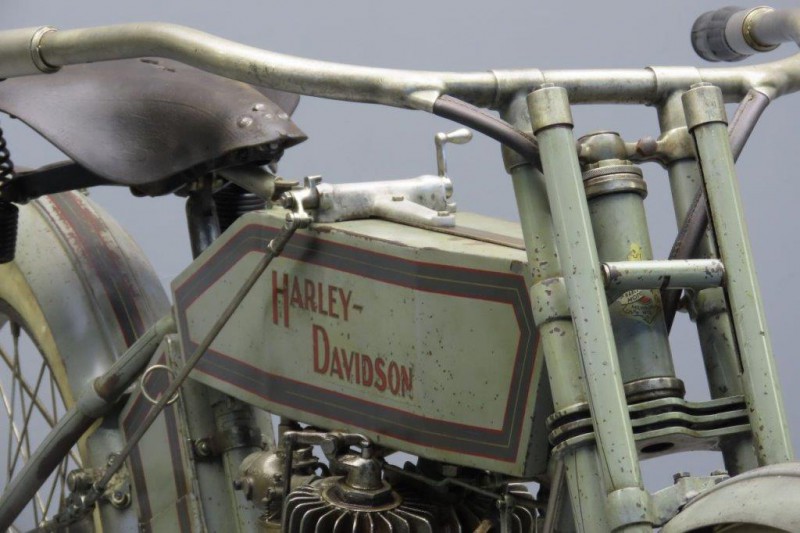 In 1911 the company presented their first V-twins and very soon these models became the customers’ favourites; it seems singles were most popular for utility uses and in the export markets.
In 1910 almost 3,200 singles were sold; in 1913 this number had almost doubled but in 1914 the output of singles had fallen to a little more than 3,200.
That same year some 15,000 twins left the factory, so we can safely conclude that a ’14 single is a rare beast.
The Model 10 was available as a single speeder with belt drive as Model 10A and chain driven as Model 10B. In C-trim the machines had a two speed gear in the rear hub and a clutch, which was new for the 1914 model year. Other novelties included an externally contracting band brake acting on a separate rear drum and a Step Starter, an early form of a kickstart but with a forward stroke.
Bore and stroke dimensions were 84.14 x 101.6 mm and the engine delivered about 5 hp @ 2,200 rpm, good for a top speed of 80 km an hour.
The 1914 V-twin model was good for 9 hp @2,400 rpm. With a weight of 90 kilos the single was as much as 50 kilos lighter than the twin. (Source: “Harley Davidson, all the Motorcycles 1903-1983” by Matthias Gerst.)
The rare 1914 single we offer here has an interesting history.
It was once part of the collection of Otis Chandler, one-time publisher of The Los Angeles Times and was also owned by Bud Ekins, who, in the late 40s, began riding off-road motorcycles daily in the hills above his Hollywood home.
As a result of his diligence, he developed into a highly talented motorcyclist and started entering local off-road races in 1949.
By the mid-1950s, Ekins was the top motocross and desert racer in Southern California, winning the AMA District 37 championship seven times.
By the mid-1960s Ekins owned a Triumph motorcycle dealership in Hollywood which became a popular destination for many young film actors including Steve McQueen, Paul Newman and Clint Eastwood.
Ekins became friends with McQueen and introduced him to off-road racing.
Through his association with McQueen, Ekins began a career as a film stuntman.
He is best known as the actor who jumped the fence on a motorcycle in the 1963 film The Great Escape, and one of the stuntmen who drove the Ford Mustang 390 GT in the car chase scene in the 1968 film Bullitt. After retiring from the film industry, Ekins continued to operate his motorcycle shop in Hollywood which featured his impressive collection of vintage motorcycles.
During the 1980s, Ekins became one of the top collectors of vintage motorcycles in the USA.
One of his prized possessions was this Model 10C, which is a good runner in excellent mechanical condition.
Its stunning authentic and slightly weathered appearance combines eminently with the sturdy and purposeful design of the machine.