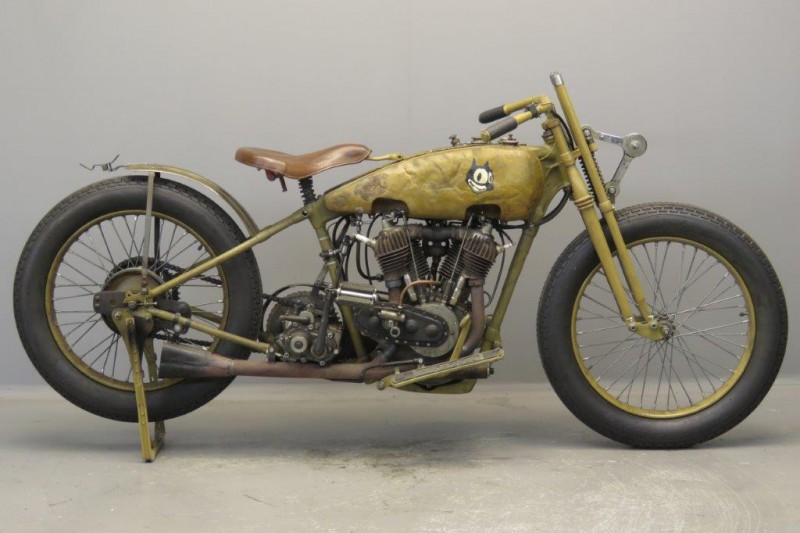 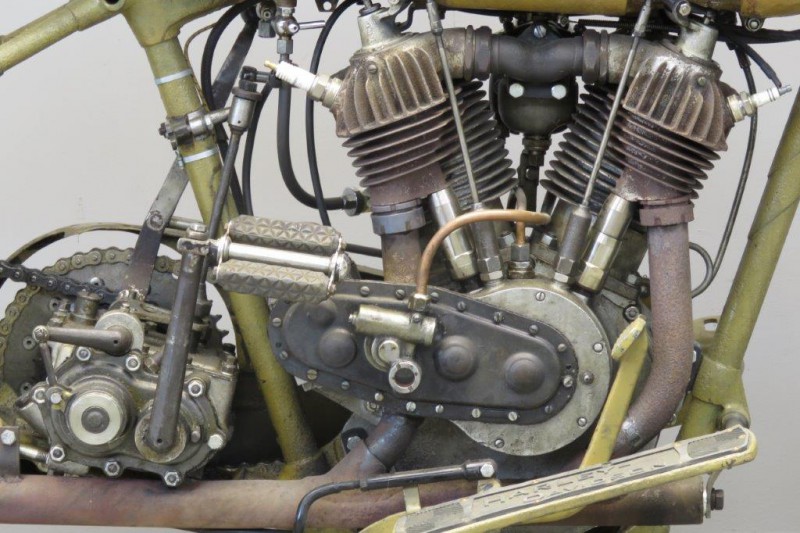 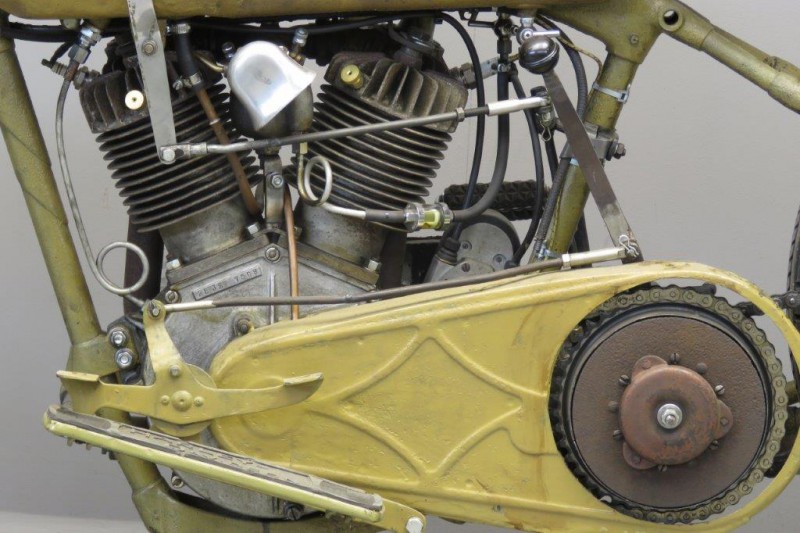 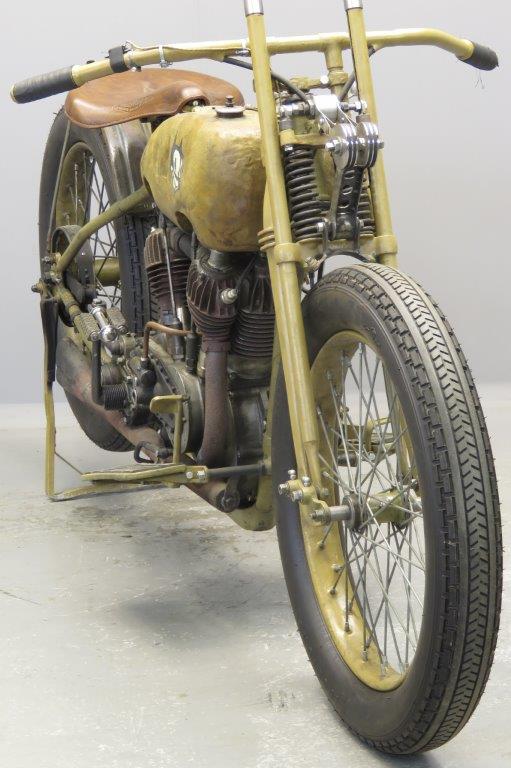 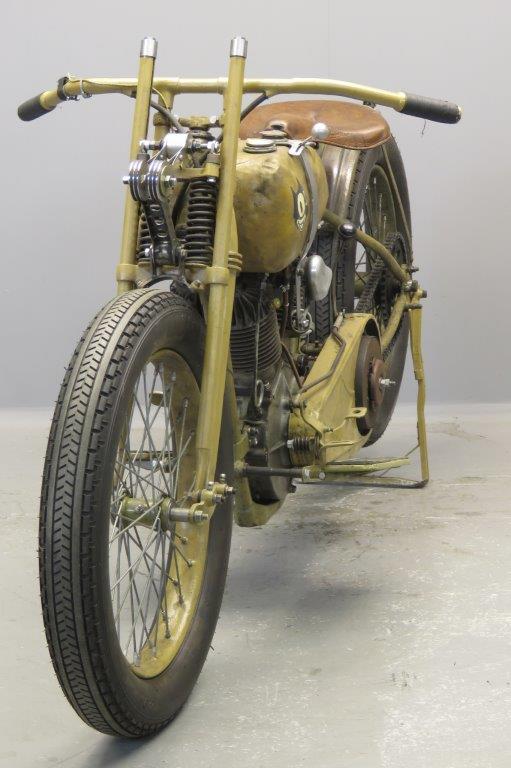 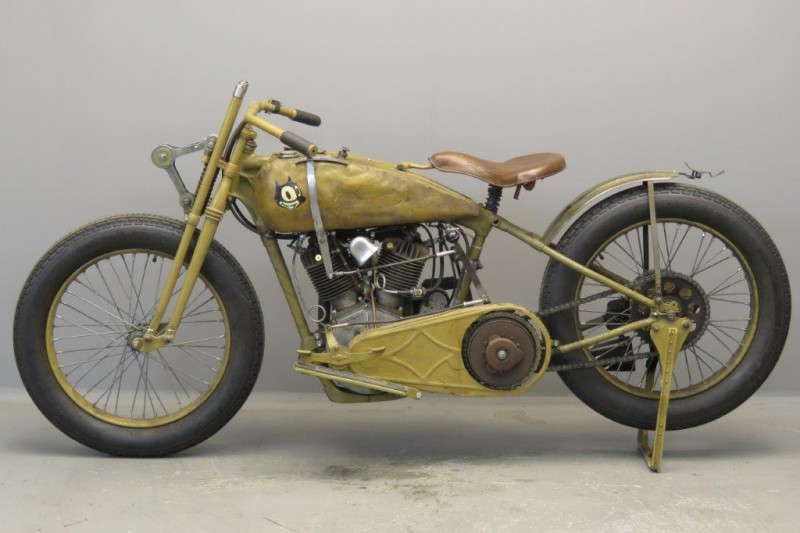 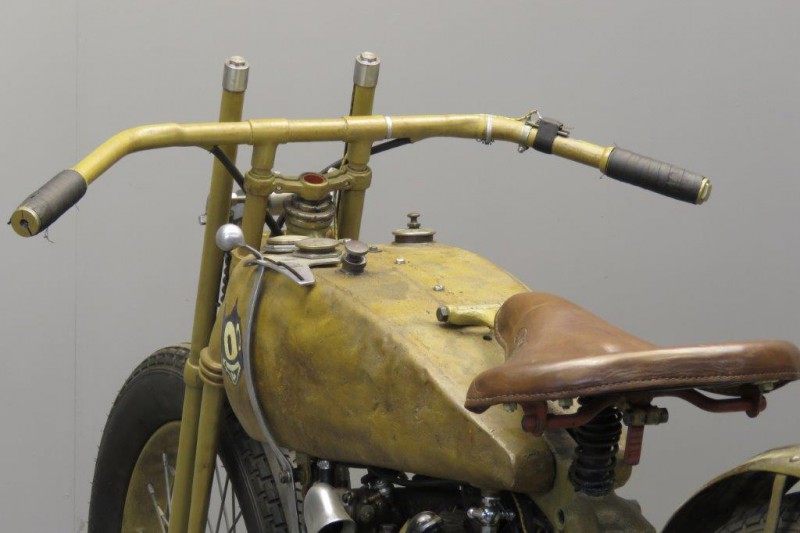 1909 marked the appearance of Harley-Davidson’s first v-twin, though it was not until the adoption of mechanically operated inlet  valves in 1911 (replacing the ‘atmospheric’ type inherited from the single) that production really took off.
Known by the sobriquet ‘pocket valve’, this ‘F-head’ (inlet-over-exhaust) engine – built in 61ci and 74ci capacities (1,000cc and 1,200cc respectively) – would remain in production for the next 20 years.
The Harley single’s transmission arrangements – direct drive by means of a leather belt – were continued at first on the twin, but the need to make better use of the engine’s power characteristics,
particularly for sidecar pulling, prompted the introduction of a two-speed rear hub for 1914, by which time chain drive and a proper clutch had been adopted.
For 1916 a conventional, three-speed, sliding-gear transmission with ‘step starter’ was introduced with full electrical equipment, and was listed from now on as the Model J (61 cu.inch) In 1925, Harley-Davidson was at the cross roads of their evolution, a change from the spindly looking earlier machines to the lines of modern motorcycles.
A new frame lowered the rider by three inches, lowering the center of gravity and improving the handling and balance of the motorcycle.
A drop forged crucible incorporated into the lower frame protected the engine from rocks and stiffened the chassis.
The motorcyclist was provided with a comfortable ride from the roomy form fitting leather saddle supported by a long spring posts that extended from the seat to the bottom of the frame.
The familiar forks had improved ride with auxiliary buffer springs while the handlebars had a new more comfortable bend that would allow the rider hours of riding without discomfort.

This wonderfully evocative 1925 ‘pocket valve’ Harley is a tribute to the board track era and has been built by the former owner to last and to have all day fun on the race track or the open road.
The engine has been overhauled completely, with new pistons, valves, valve seats and all bearings.
The transmission and clutch received new bearings and clutch plates.
The front forks have an extra shock absorber, which not only look good but does a proper job also.
Further the bike is equipped with massive 20 x 3.85 clincher ( beaded edge ) tyres.
The leather top saddle stands for a comfortable ride.
The handlebars are of the speedster type for more comfort as the much lower racing handlebars are less suitable for long distance riding.
The rear mudguard is of the small single cylinder 350cc B Model.
The exhaust is the straight through model and guarantees much attention from the crowd.
The former owner decided to “restore” the machine in technical respect and to leave the “rough” cosmetics “as is” .
Should one wish to civilize this racing machine, a pair of standard mudguards, standard handlebars and a nice paint job will do
the trick…..