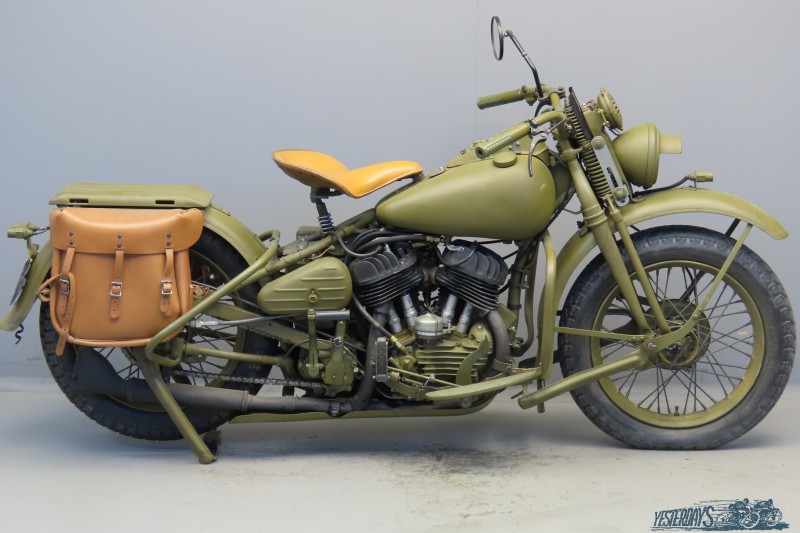 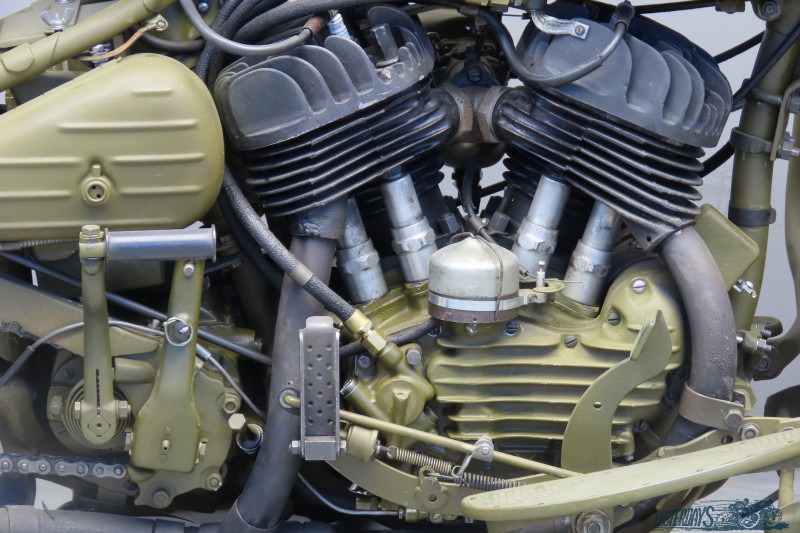 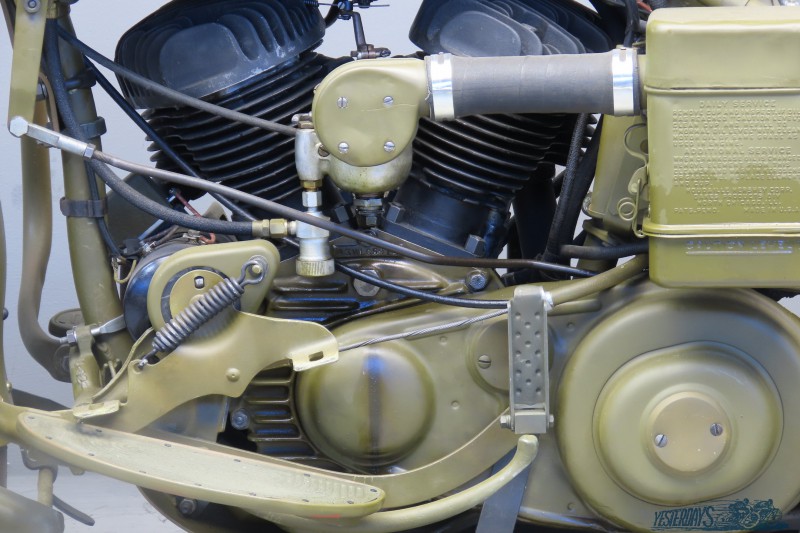 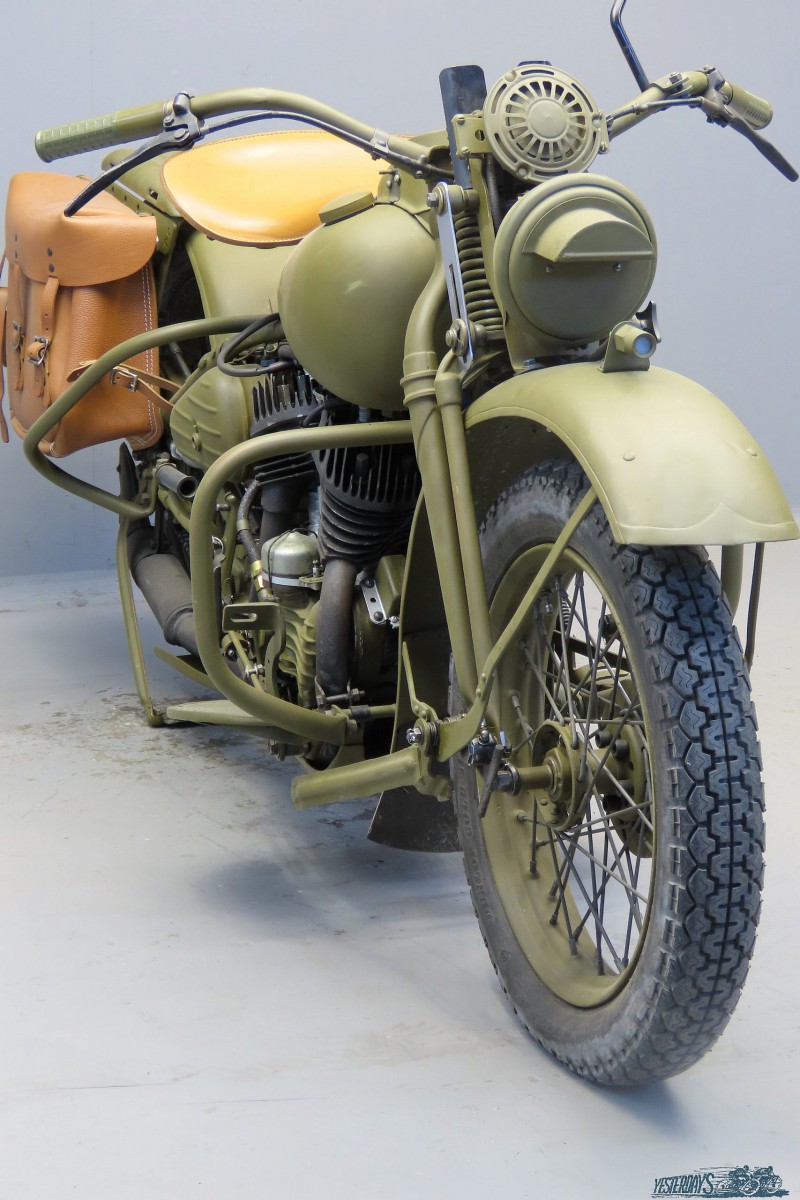 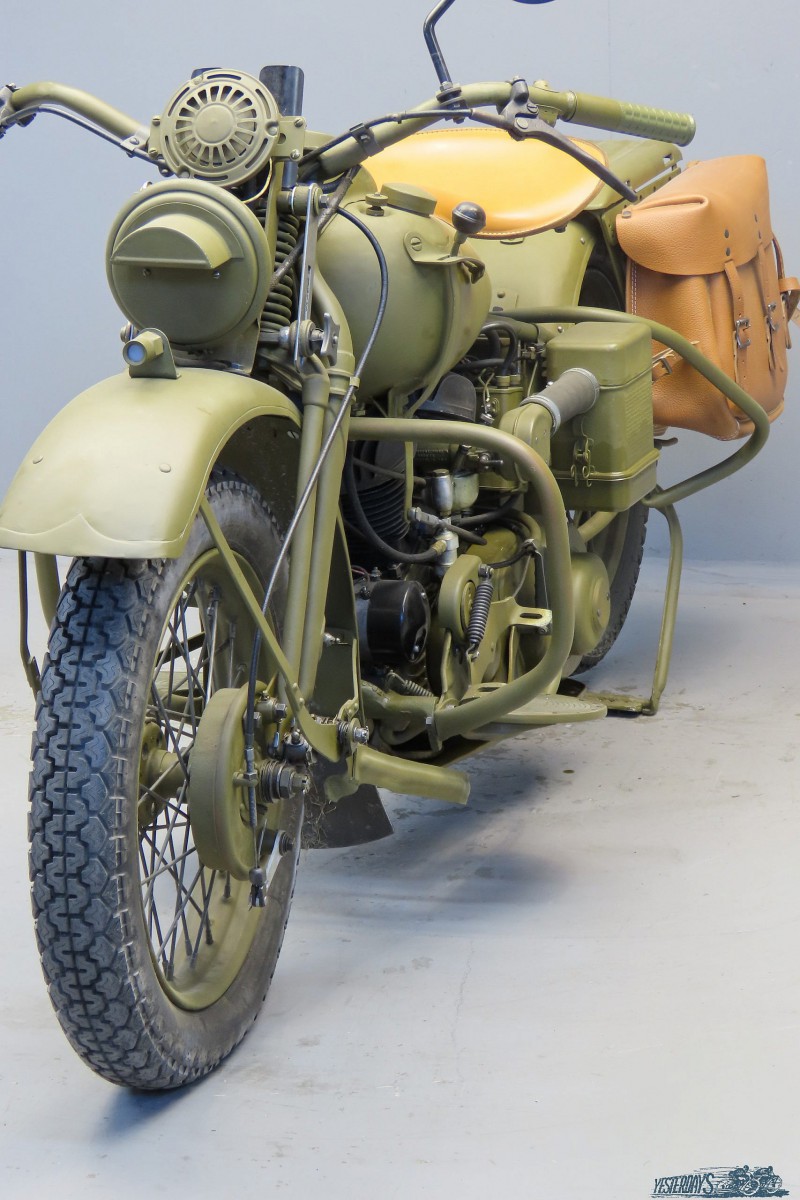 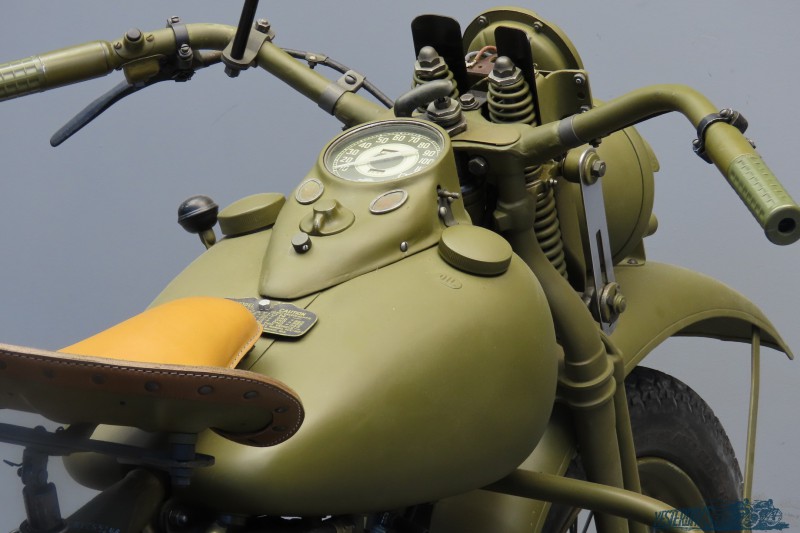 Harley-Davidson began producing the WLA in small numbers in 1940, as part of a general military expansion.
The later entry of the United States into World War II saw significantly increased production, with over 90,000 being produced during the war (along with spare parts the equivalent of many more).
A “Motorcycle Mechanics Handbook” from the Armoured school at Fort Knox mentions: “The WLA Harley Davidson Army model has several features not found on civilian machines. Some of those are”Black out” lights, oil bath air cleaner, a carburettor with a fixed high speed jet, skid plate, military type fenders, and lusterless paint.” The book then mentions a list of further specifications which include:
-minimum required climbing ability in low gear, 55% slope, high gear 15% slope
-cruising range of minimum 100 miles with 3 1/3 gallon tank
-fordability of 18 inches of water
-payload of 250 to 300 pounds
– road clearance 4 inches, but the vehicle can safely negotiate obstacles much higher due to the excellent skid plate and with proper handling by rider
– maximum speed required 65 mph, minimum 5 mph.
Harley Davidson would also produce a close WLA variant for the Canadian Army, called the WLC. Moreover, the company would also supply smaller numbers to the UK, South Africa, and other allies, as well as filling orders for different models from the Navy and Marine Corps.
Many WLAs would be shipped to allies under the Lend-Lease program. The largest recipient was the Soviet Union, which was sold over 30,000 WLAs. Production of the WLA/WLC would cease after the war, but would be revived for the Korean War during the years 1949 to 1952.
The WLC Model, although very similar to the US Army WLA, differs in many details from its American counterpart.
To name a few: front and rear wheels are interchangeable, front brake drum is the ‘Big Twin’ style, lighting equipment is quite different, throttle is on the left handlebar with ignition timing on the right, oil and gas lines are rubber, an auxiliary clutch hand lever is provided on the handlebars, later 43WLC have green plastic handlebar grips and WLCs were not equipped with a Submachinegun bracket and Ammo box at the factory.
Detailed WLA and WLC information can be found on the website http://www.theliberator.be

The machine we present has been restored to Army specifications and is road-registered.
She is in good overall condition and a fine runner.