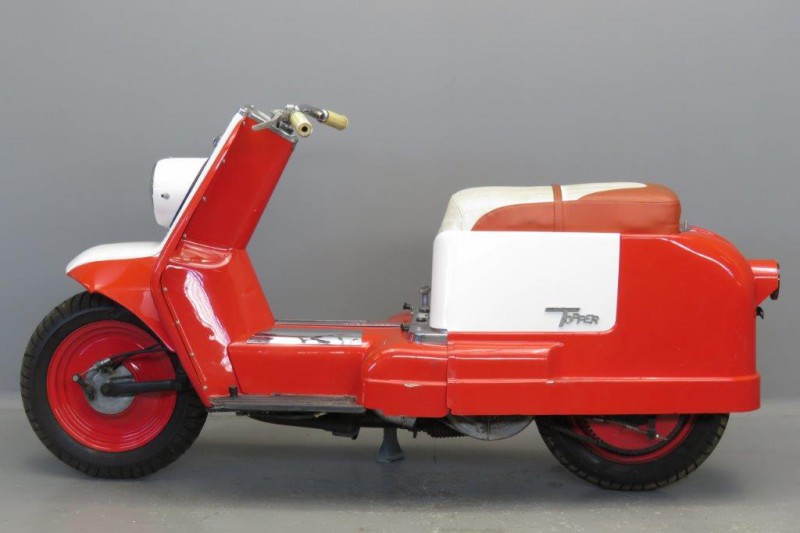 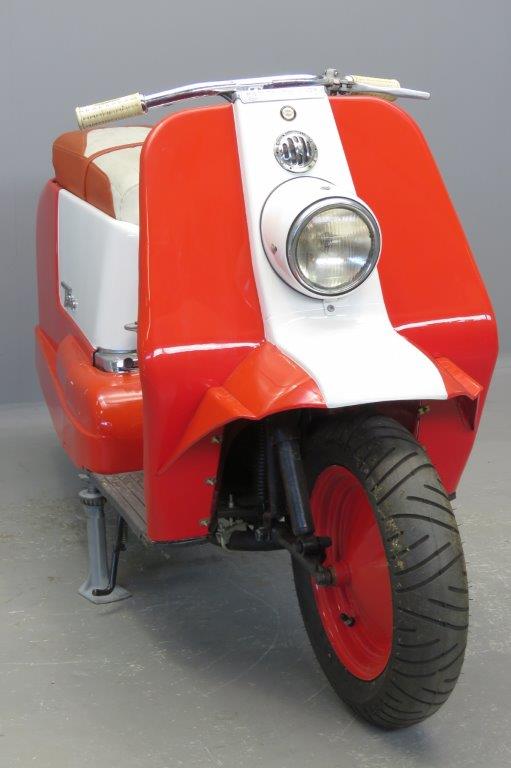 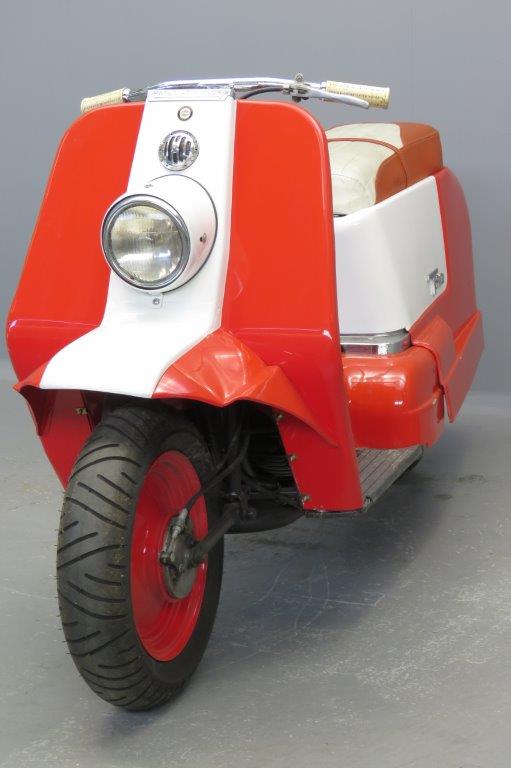 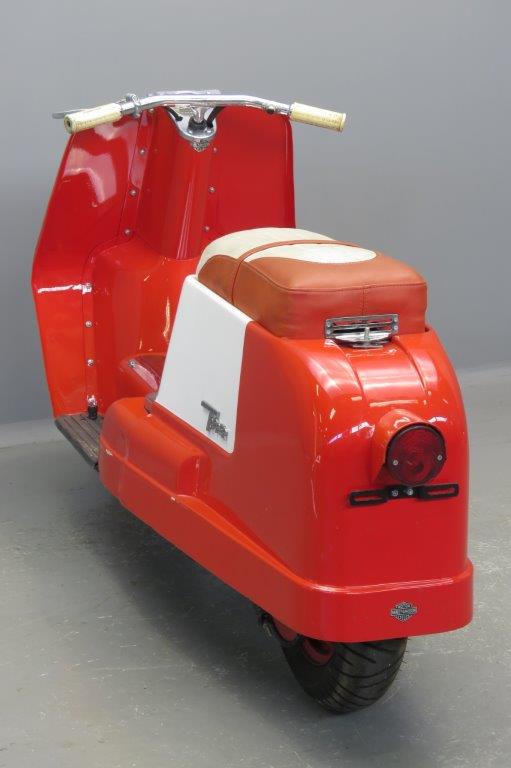 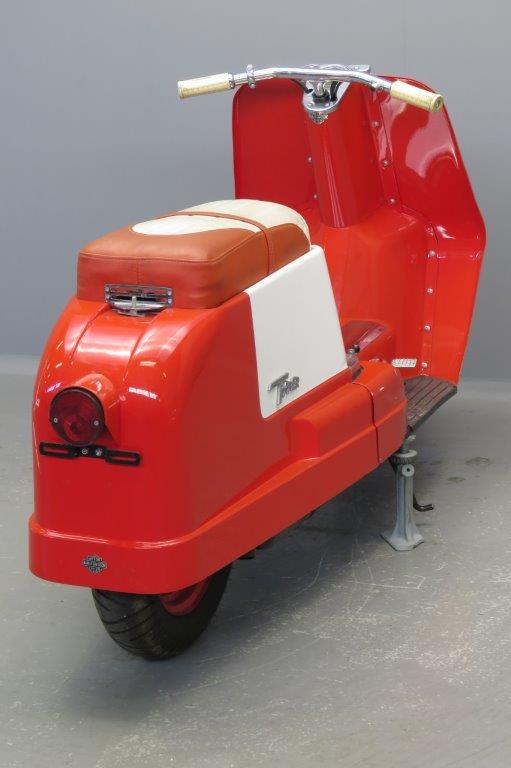 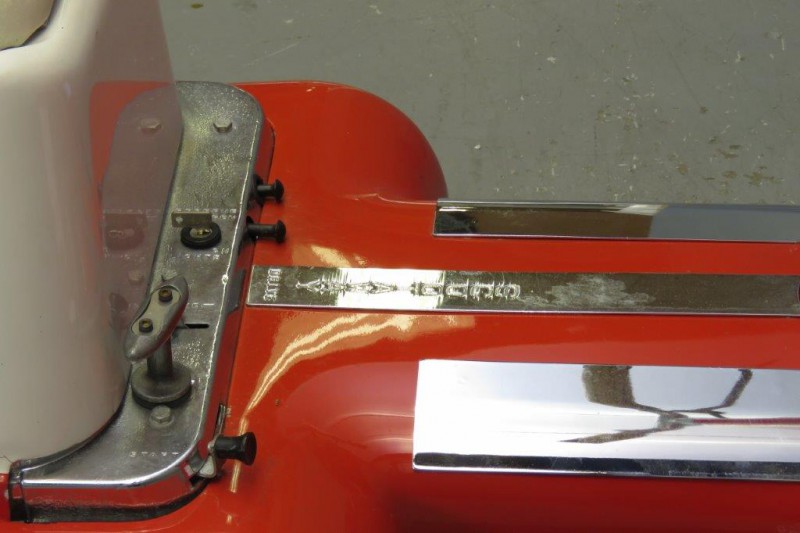 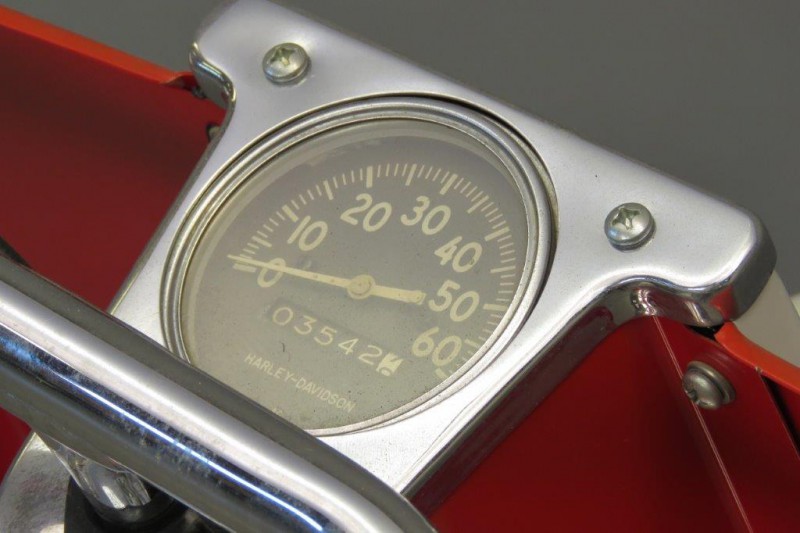 The Topper has a 165 cc (10.1 cu in) single-cylinder two-stroke engine mounted horizontally between the floorboards.
The engine requires a premixed gasoline/oil mixture.
The starter is of the rope-recoil type similar to lawn mowers.
Unlike most scooters with enclosed engines, the Topper's engine does not have a cooling fan.
It was expected that the low, horizontally mounted engine would be cooled by air passing under the scooter, but some Toppers developed overheating problems.
The engine uses a reed valve in its induction system.
The engine powers a continuously variable transmission called "Scootaway Drive" that includes a safety device that did not allow the scooter to move from rest at engine speeds higher than 1800 rpm. Final drive is by an exposed roller chain.
The Topper has 5 inch internal expanding drum brakes on both wheels.
The front brake is controlled by a hand lever on the left handlebar with a parking brake lock  the rear brake is controlled by a pedal. The front body, front fender and floorboards of the Topper are made of stamped steel, and the engine cover and body are made of molded fiberglass.
Storage space is provided under the seat; the manufacturer suggested storing extra containers of two-stroke oil there.
The main complaint from Topper owners was with the "Scootaway Drive" continuously variable transmission. Road grime would get into the transmission and cause the belt to slip.
A new transmission, with the primary drive sealed in an oil bath, was introduced for 1961.
The Topper H was introduced in 1961 (sold through 1965) with a new alloy cylinder head that increased the compression ratio to 8.0:1, a reusable foam air filter, and revisions to the cylinder ports and air intake tube.
A detuned version of the Topper was also available, with the power restricted to 5 hp (3.7 kW) This was advertised as the "Topper U".
The detuned Topper was made to comply with laws in some states in the United States that allowed motorcycles with rated engine power below a stated maximum to be operated without a license or to be operated on a special license by riders at a younger age than would be allowed a regular motorcycle license.
In 1959, a Topper was ridden from Bakersfield, California to Death Valley and back without repair or adjustments requiring tools.
The route went through Trona, through the Mojave Desert to Stovepipe Wells, on to Badwater Basin, the lowest point in North America at 282 ft (86 m) below sea level, then to Whitney Portal, 7,851 feet (2,393 m) above sea level on the side of Mount Whitney, after which it returned to Bakersfield.
Source “WIKIPEDIA”
This Harley-Davidson “Topper” has been restored with care