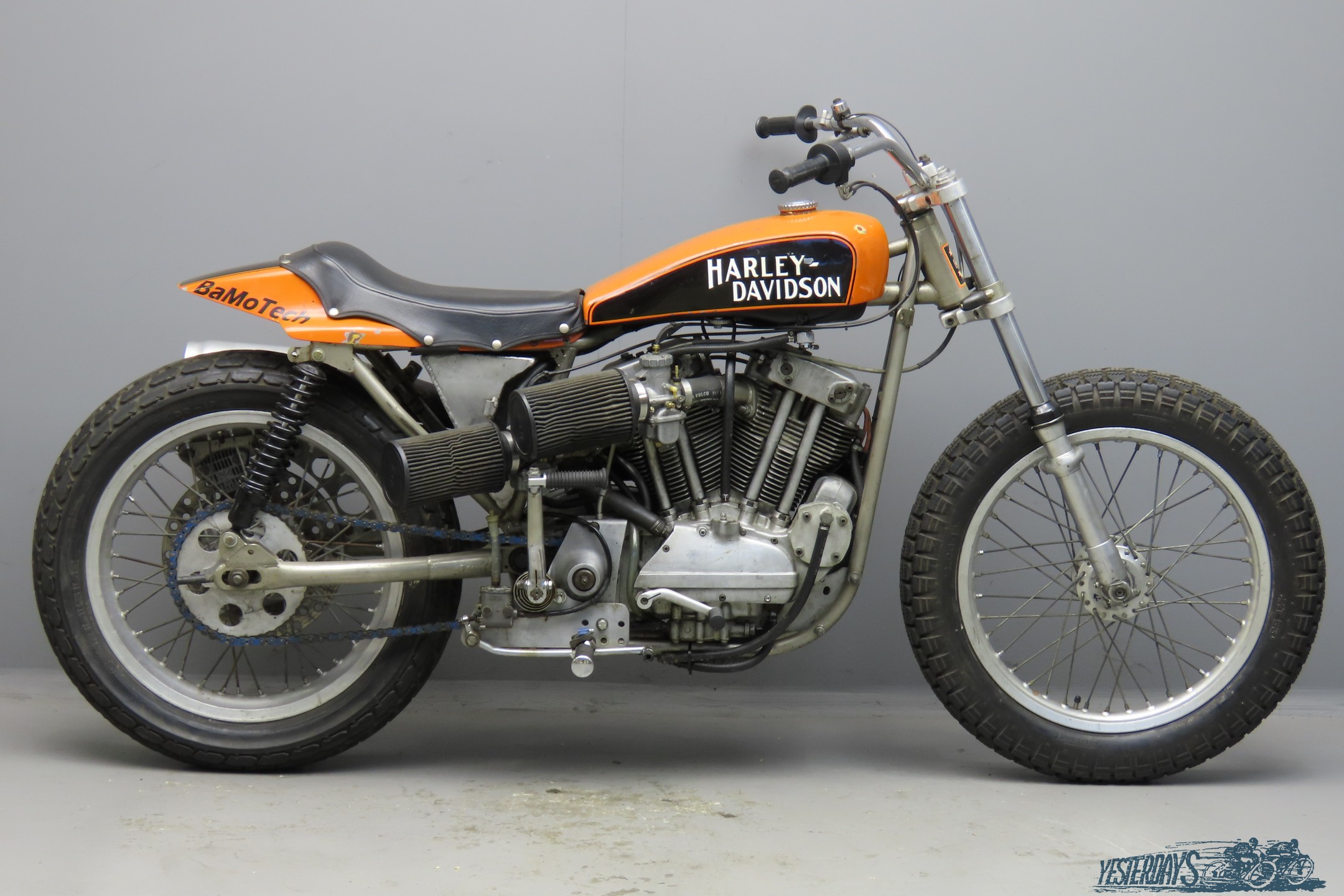 The AMA Grand National Championship Class C rules, introduced in 1933 and revised in 1954, had an equivalency formula limiting side valve engines to 750 cc displacement, while more modern overhead valve engines could be a maximum of only 500 cc.
Over time, this displacement advantage kept the older side valve technology on the track and discouraged a broader field of competitors.
At least 200 homologated examples of a model had to be built and made available to the public.
The side valve Harley-Davidson KR series had dominated Class C racing, but by the late 1960s BSA, Norton and Triumph had little market for 500 cc OHV motorcycles, and there was increasing pressure for a single displacement, without reference to valve configuration.
The public was buying 650 cc and larger displacement British bikes, and they would prove to be competitive, given the chance.
With the British marques gaining influence in the AMA, in 1969 new rules were established that there would be one maximum displacement for dirt track racing, 750 cc, with no regard for valve type, though the 500/750 OHV/side valve split was kept for the time being in road racing.
OHV engines began to dominate racing, the side valve KRs were a decade out of date and could no longer compete.
With limited time and money in 1969, Harley-Davidson’s racing manager Dick O’Brien and his team used elements of existing designs to put together a new OHV racer.
Rather than start from scratch they decided to modify their existing OHV racer, the Sportster-based 900 cc XLR magneto-equipped race engine.
This was too large to be legal, so a modified version was created using the same basic upper end parts (iron heads and cylinders) but with a drastically shorter stroke and shorter connecting rods to reduce the displacement to the 750 cc legal limit.
These iron head XR-750s of 1970–71 (humorously called “waffle irons”) were prone to overheating and had insufficient power.
The engine was again re-designed for 1972 with an all-aluminium head and cylinder with bigger bore and shorter stroke for the same 750 cc displacement.
The frame and the running gear were held over from the KRTT racer, with a Ceriani front fork and two Girling rear shocks.
The fuel tank and rear seat/fender combination were fiberglass, with a snap down seat cover over a foam cushion.
To comply with AMA homologation rules, two hundred examples were made and could be had upon request at Harley-Davidson dealers, at a price of US$3,200, which today with inflation would be about US$ 21,325.
The official horsepower was never published, but estimates for the early 1972 engines are in the high 70–79 hp (52–59 kW) range, increasing to an estimated 100 hp (75 kW) or more by 2008. Riders on XR-750s have won 29 of the 37 AMA Grand National Championships from 1972 to 2008 inclusive.
Besides having more wins than any other bike in AMA racing, it has been called the “most successful race bike of all time”, and has a claim to have more wins than any other racing motorcycle in history. (source: Wikipedia)
The machine on offer has no front brake and a disc-type rear brake.
19 inch wheels are fitted and two Mikuni 36 mm carbs feed the mixture to the engine.
This rare XR dirt tracker is in good overall condition with a strong running engine.