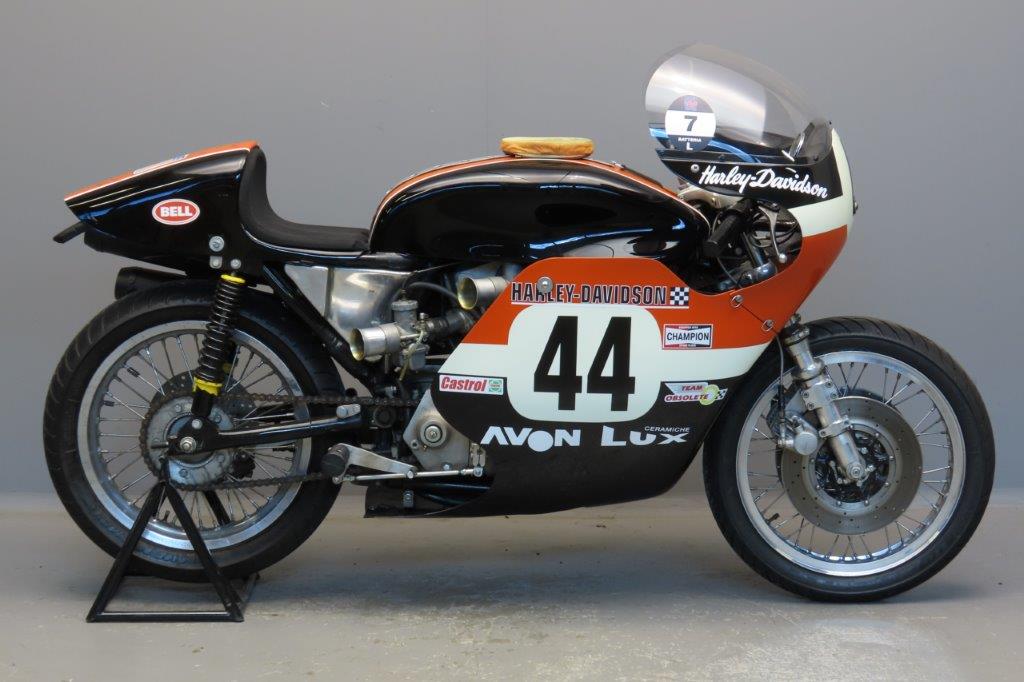 The AMA Grand National Championship Class C rules, introduced in 1933 and revised in 1954, had an equivalency formula limiting side valve, engines to 750 cc displacement, while more modern overhead valve engines could be a maximum of only 500 cc.
Over time, this displacement advantage kept the older side valve technology on the track and discouraged a broader field of competitors.
At least 200 homologated examples of a model had to be built and made available to the public.
The side valve Harley-Davidson KR series had dominated Class C racing, but by the late 1960s BSA, Norton and Triumph had little market for 500 cc OHV motorcycles, and there was increasing pressure for a single displacement, without reference to valve configuration.
The public was buying 650 cc and larger displacement British bikes, and they would prove to be competitive, given the chance.
With the British marques gaining influence in the AMA, in 1969 new rules were established that there would be one maximum displacement for dirt track racing, 750 cc, with no regard for valve type, though the 500/750 OHV/side valve split was kept for the time being in road racing. OHV engines began to dominate racing, the side valve KRs were a decade out of date and could no longer compete.
The road racing version of the XR-750 uses an aluminum oil tank, has a 23 l fiberglass fuel tank, and a fiberglass fairing which includes extra heat shielding to protect the rider’s left leg when riding in a tuck position.
On the top centre of the fuel tank is a leather pad with a round cut-out for the left-side fuel filler cap.
Like the dirt tracker, it uses a Ceriani fork and Girling shocks, two 36 mm Mikuni carburettors and tuned dual reverse cone exhausts.
Instrumentation consists of a Smiths tachometer.
Unlike the dirt tracker, it comes with brakes: a rear disc brake, and in front, at first a Fontana four leading shoe drum brake and later double discs.
The official horsepower was never published, but estimates for the early 1972 engines are in the high 70–79 hp (52–59 kW) range, increasing to an estimated 100 hp (75 kW) or more by 2008.

The former owner of this iconic classic racer purchased it directly from Team Obsolete’s Robert Iannucci: there’s an autographed dedication with the text “Team Obsolete 2001, per Ozvaldo passionato”.
With the bike comes a letter from Rob Iannuci in which he writes “I can confirm that we acquired this bike from the HD factory in the 1980s.
We raced it to much success at Daytona, Mid Ohio, Loudon and Laguna Seca.
|Riders were Dave Roper, John Cronshaw and Ivon Duhamel.
It won many races for us, including Daytona. “
Team Obsolete was formed in 1978 when founder Rob Iannucci purchased his first AJS 7R and decided to take it on the racetrack.
Finding few places to run, Rob eventually partnered with other like-minded enthusiasts and founded North America’s first Vintage Motorcycle Racing Association.
Team Obsolete’s aim was and is to race rare and exotic grand prix bikes that were usually seen only in static displays or hidden away in private collections.
They want the public to once again experience the racing sounds and auras of these rare machines.