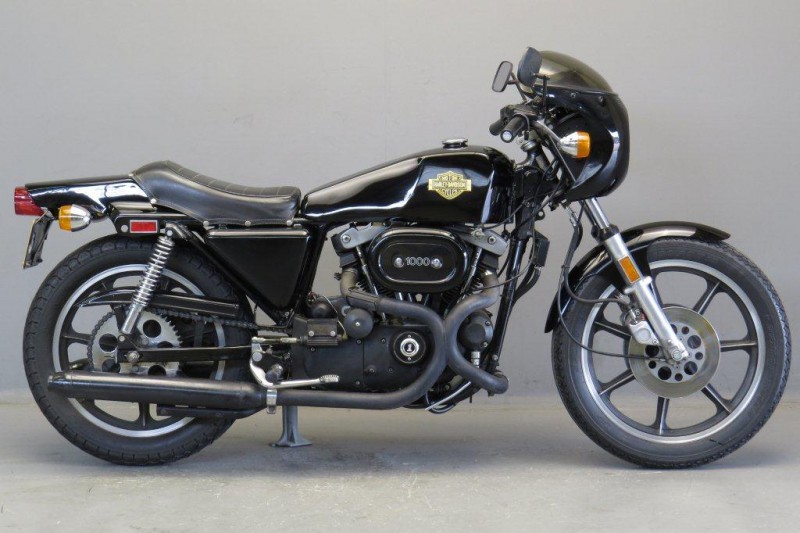 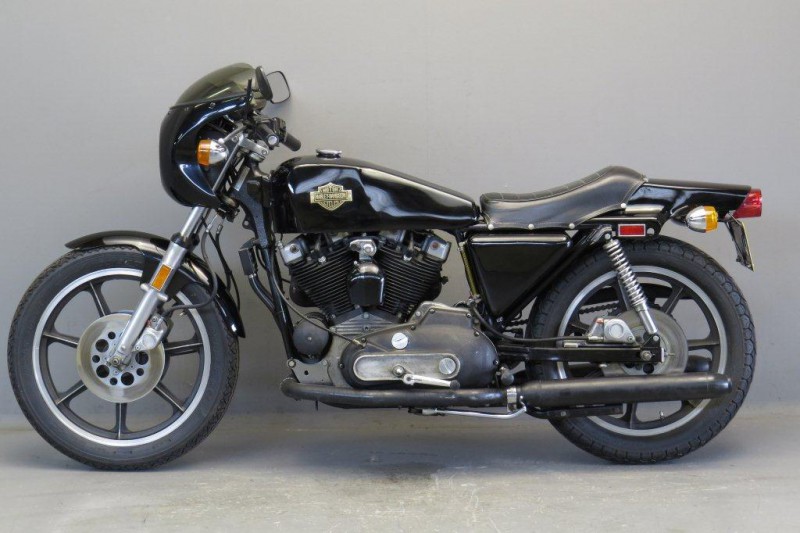 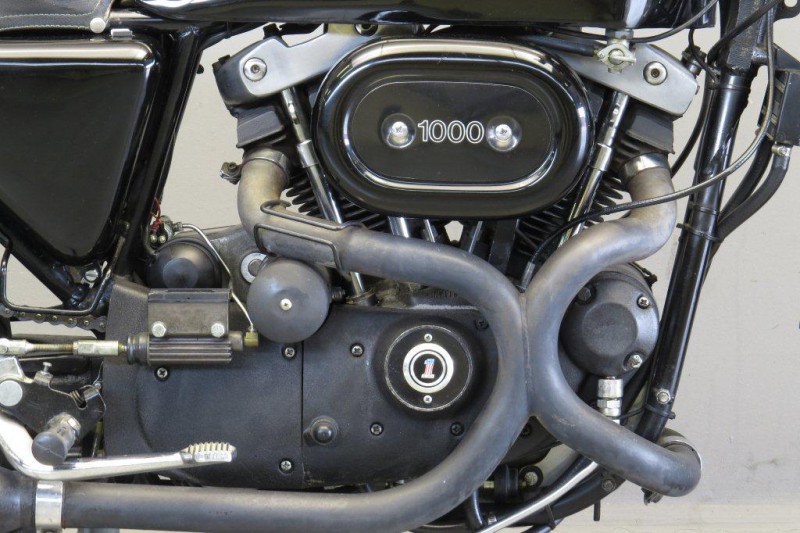 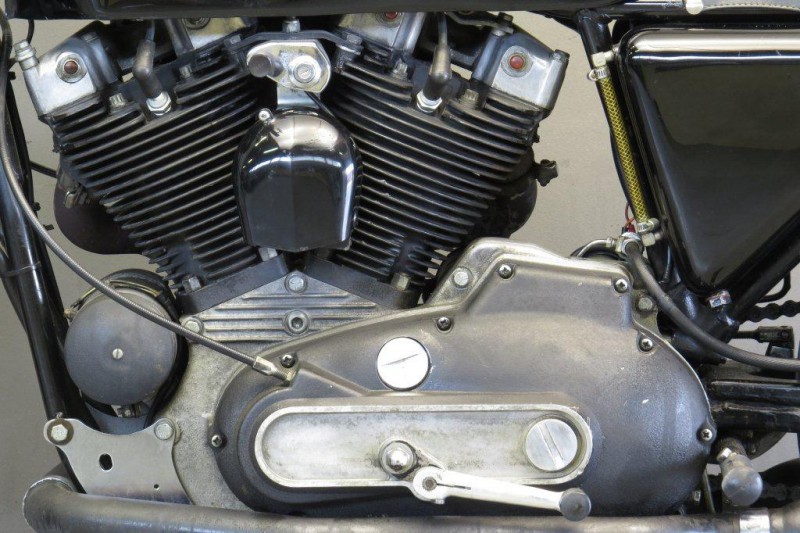 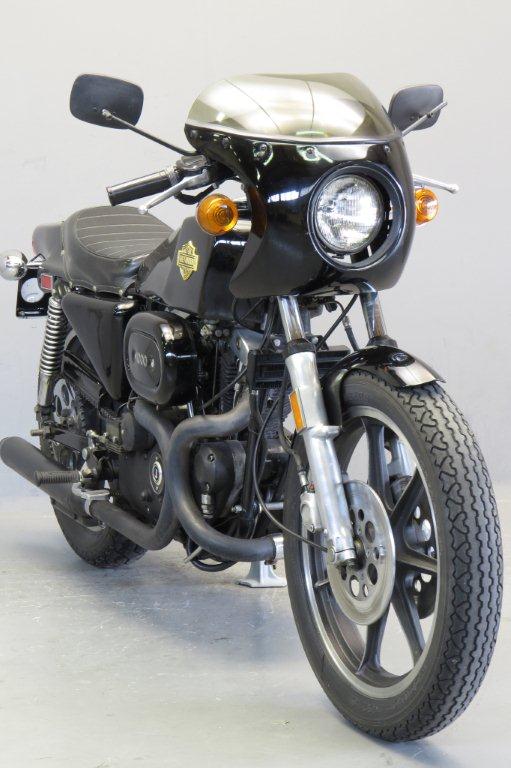 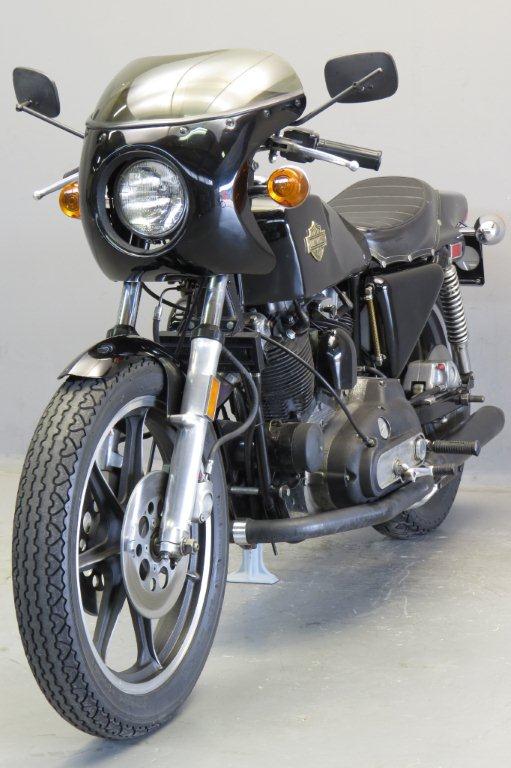 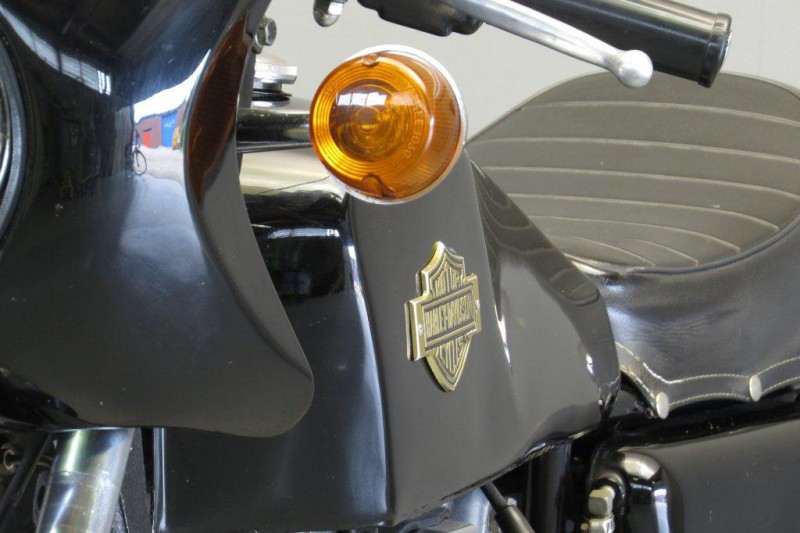 Based on the XL Sportster, the XLCR Cafe Racer sported a small fairing, four-gallon gas tank, and fiberglass rear tail section.
Low handlebars were fitted, allowing the rider lean forward into a racer tuck.
Foot controls were mounted further back.
The XLCR was offered in black only, with wrinkle-black engine paint and black siamesed exhaust pipes.
A new frame, designed for better handling and more lean angle, took some elements from the Harley XR750.
The rear frame rails were extended, and the rear shocks were positioned more vertically. Wheelbase measured 58.5 inches.
Dual-disc front brakes and cast alloy wheels, optional on other Sportsters this year, were standard on the XLCR.
The seven-spoke wheels, made by Morris, were 19" up front and 18" at the rear.
Harley continued to produce the XLCR in 1978, competing against bikes such as the Kawasaki Z-1, Ducati 900SS, and BMW R90S.
Harley came out with an optional dual saddle and axle-mounted passenger pegs.
The XLCR shared the same air-cooled, twin-cylinder engine of other 1977 Sportsters.
Displacement of 997cc (60.84-cid), was achieved through a bore and stroke ratio of 3.2 x 3.8 inches.
With a compression ratio of 9.0:1, 57 horsepower was achieved at 6,000 rpm.
The unique siamesed exhaust pipes helped provided an additional five horsepower from other XL’s.
XLCR models also used a solid-state voltage regulator, and had more radical valve timing than the other Sportster models.
The 1977 and 1978 XLCR’s were the fastest and quickest Sportster models produced at that time.
Top speed on the 480-pound bike was around 110-mph.
Prized as a collectors item, the XLCR was already rare when new.
There were 1,923 produced in 1977, 1,201 produced in 1978,
and just nine produced in early 1979. While not fully appreciated in it’s day, the XLCR helped future Sportster models achieve better handling, braking and agility.
This low mileage (12278 mls) XLCR is in a very good original condition and runs very well.